Late at night we arrived in Buenos Aires today at the airport “Buenos Aires-Jorge Newbery”.

From the airport we took a taxi to our Hotel Babel Suites. Since the shuttle buses only leave the city until midnight, there was unfortunately no other option. The room was very spacious and modernly furnished. In the bathroom, many hairs lay on the floor and parts of the shower were rusty. The air conditioning in the room was permanently on and could only be controlled by the reception. So you had to call the reception for every change (on, off, warmer, colder etc), which is totally annoying and we haven’t experienced any hotel like this before. The breakfast buffet is manageable, but sufficient. Pool is available on the roof – with some sun loungers for sunbathing. According to the website, the hotel offers a “Complimentary Laundry Service”, which is not true. Upon request, we were referred to the laundry two streets further. Wifi worked without problems.

Buenos Aires is the capital and the political, cultural, commercial and industrial center of Argentina. It is an important cultural centre and was awarded the title City of Design by UNESCO in 2005. After we had slept the next morning, we wanted to see the city. Like any other big city, we explored Buenos Aires on foot. So you just see more of the city than if you sit down in a metro and drive from station to station.

The Obelisk and the Street of July 9

The first port of call for us was the large obelisk, which stands in the middle of the Avenido 9 de Julio. The Avenido 9 de Julio is often referred to as the widest road in the world with its 20 lanes at 140 meters. And we wanted to see that from above. We simply asked in an NH hotel if we were allowed on their roof terrace. That wasn’t a problem and we were at the top. The view was really nice and the weather also played along.

One of the most interesting things we actually found was the cemetery La Recoleta. It has been the resting place of many wealthy and prominent residents, has its own overview map and you can even take part in guided walking tours. Somehow strange. Argentine presidents, professional athletes, scientists and actors were buried here. The special thing is that this cemetery consists only of mausoleums – there are no normal graves. You can even look into many of these mausoleums and the coffins or urns in them are almost within reach. It’s a depressing feeling.

There are numerous museums, theatres (probably the largest number in the world), churches and statues in squares in Buenos Aires. The city is often referred to as Paris of South America, as the culture is very European. In our opinion, 2 days is enough to explore the city and its sights.

That was already our short stay in Argentina. We would have liked to have travelled on to Patagonia and wanted to see the Torres del Paine National Park and the Los Glaciares National Park with the Perito Moreno Glacier. But in our time there were somehow no cheap flights to this part of the world and so we unfortunately had to let that out of the route planning for our world trip.

The Starbucks Cup of Buenos Aires

Buenos Aires has several Starbucks stores and also its own cup 🙂 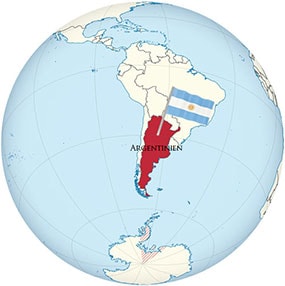