Orlando is considered the center of the amusement and theme park industry in the United States. Walt Disney, Universal Studios and SeaWorld in particular have located their largest theme parks in and around Orlando, attracting millions of visitors each year. This made us totally curious and so we used our 5 days in Orlando mostly for visiting theme parks 🙂 Two of the most famous parks are SeaWorld Orlando and the Water Park Aquatica.

The SeaWorld Orlando theme park is a mixture of amusement park and animal park and offers its visitors lots of roller coasters, animal encounters as well as many other attractions.

Where is SeaWorld in Orlando located?

SeaWorld Orlando is located approximately 15 miles southwest of Downtown Orlando between Interstate 4 and International Drive. The closer you get to the park, the better the signage to the entrance or to the appropriate parking areas. It is important to know that parking is not included in the entrance ticket. You pay 30 USD per car for the ‘General Parking’ and for the VIP Parking (closer to the entrance) currently 45 USD.

The location of SeaWorld Orlando in Florida

Things to know about SeaWorld Orlando

The park opened on December 15, 1973, as the chain’s third park, just two years after Walt Disney World Resort’s Magic Kingdom. To remain competitive, SeaWorld Orlando has been transformed over the years from more of a show park to a ride park. So simulator rides were added, a combination roller coaster and water slide, as well as a flying and a bottomless roller coaster. SeaWorld Orlando includes two sister parks: Discovery Cove opened in 2000, followed by Aquatica water park in 2008. 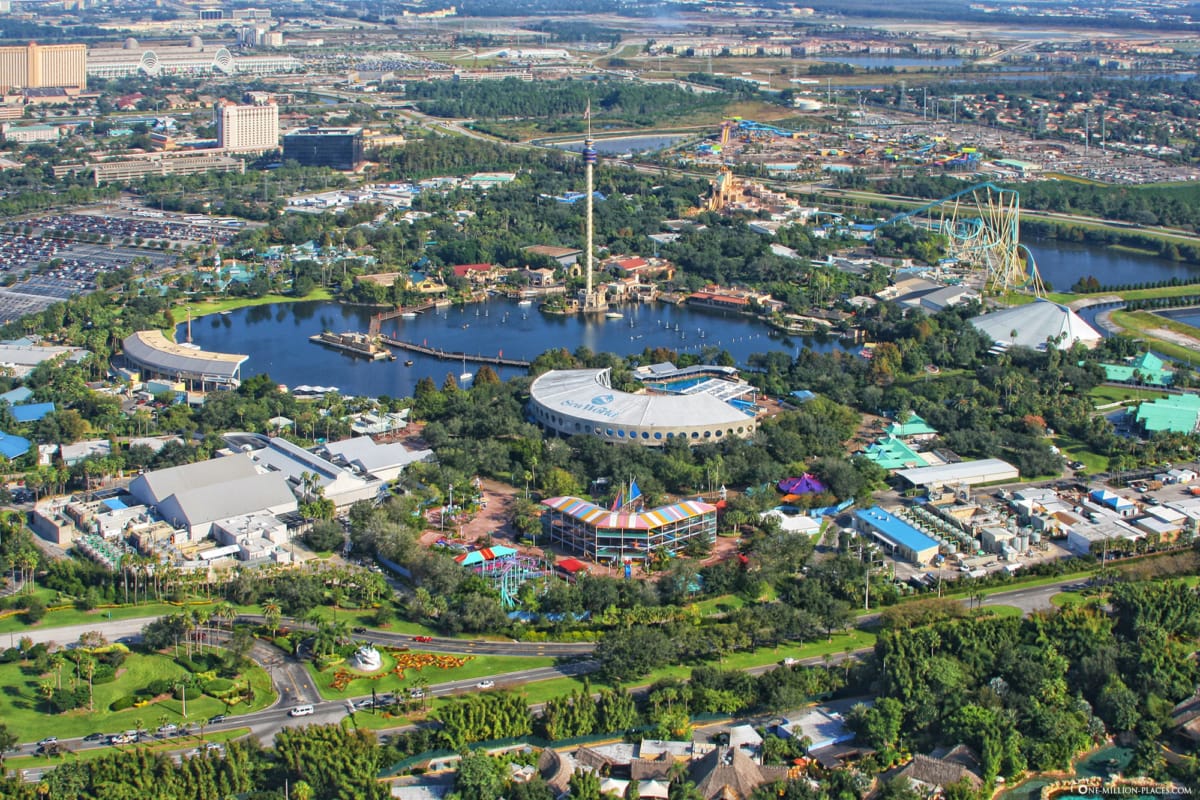 The SeaWorld theme park in Orlando

Daily admission to SeaWorld Orlando is currently just under $152 per person (including taxes & fees). This is insanely expensive, especially if you visit the park as a family with children, because children also pay full price from the age of 3! It is worth – as with all amusement parks – to look at the official website beforehand, because there are sometimes very good offers, eg. a combination offer for visiting two or three parks. Alternatively, you can also take a look at the offers at GetYourGuide.

Cheapest day tickets and offers “3 parks for the price of 2” at Attraction Tickets.

Due to an approaching thunderstorm, all rides were closed from early afternoon on the day we visited for safety reasons. But since SeaWorld has a “Sunny Day Guarantee“. In such a case you can simply go to the visitor center and get a free return ticket, which is valid for 1 year.

A map of the theme park

The park is very beautiful and spacious, but of course this also means that there is a lot of walking 😉 But we did not mind that. By the way, there is also a park app, so you can easily navigate through the park with it.

A full map of SeaWorld theme park in Orlando can be downloaded as a .pdf version here.

A map of SeaWorld Orlando

For more than 50 years, SeaWorld has worked to rescue and rehabilitate animals. From habitat protection to supporting ocean health initiatives to numerous rescue and rehabilitation efforts, SeaWorld is part of conservation projects around the world. In that time, SeaWorld’s rescue teams have helped more than 40,000 sick, injured and orphaned animals in need, giving them a second chance at life. In doing so, they are on duty around the clock, 365 days a year, working with various agencies to rescue and help animals.

SeaWorld Orlando currently has 4 roller coasters (Ice Breaker, Mako, Kraken, Manta); another new roller coaster has already been announced for 2023 (The Surf Coaster). With high speeds, backwards descents as well as vertical drops, they all provide a big dose of adrenaline and a thrill or two. In addition, there are two water rides (Infinity Falls, Journey to Atlantis) and the opportunity to rent paddle boats to paddle across Central Lake.

Not a roller coaster in the classic sense, but still highly recommended, is the 120-meter-high Sky Tower, which has been an icon in the park since it opened in the summer of 1974. From it you have a beautiful view of the park and the surrounding area. Unfortunately, a ride in the Sky Tower is not included in the ticket price.

Dolphin Cove at SeaWorld Orlando is one of the largest interactive dolphin pools in the world, where dolphins can be seen playing and jumping above the water or swimming in the underwater area. In addition, there is also the ‘Dolphin Nursery’, where mother dolphins and their calves are cared for.

SeaWorld Orlando has a dedicated 5-acre Rescue Center where sick, injured or orphaned wild animals are rehabilitated – including manatees, sea turtles, birds and other marine animals. While a guided ‘SeaWorld Rescue Tour’ of the entire facility has been available for years for about $20 per person, the park also recently opened up a portion of this area to all park visitors for free viewing.

The attraction “Antarctica: Empire of the Penguin” is very popular in the park, as here we actually had to wait longer in line to get in. First, you enter an anteroom where a short introductory video is played. After that you come to the actual penguin area (both above and below water), where you can observe 5 different species of penguins. We always totally like penguins, for example, how they waddle through the snowy surroundings or glide gracefully under water.

Our tip: It is very cold in the penguin enclosure, so it is worth taking a thin jacket or sweater.

Sesame Street Land is the kids area at SeaWorld Orlando. The backdrops are based on the TV series of the same name and we totally loved those too, as they are just cool photo spots. Sesame Street Land also has a few rides for kids, but unfortunately all the rides were closed in the afternoon due to the upcoming thunderstorm, so we couldn’t try any of the attractions.

At Shark Encounter you can walk through one of the largest underwater viewing tunnels in the world, observing various small and large shark species. In addition, you can learn all kinds of interesting facts about the animals on information signs.

Throughout the day, SeaWorld Orlando offers a variety of shows featuring animals. At Dolphin Stadium we watched a show with dolphins, where we learned more about their natural behaviors and traits – in addition to performing tricks. At another show we watched, the featured performers were California sea lions and Asian short-clawed otters. We were able to see the animals in action and also learn more about their characteristics, abilities and behaviors.

Furthermore, there is also an orca show, which we did not watch. SeaWorld had come under a lot of criticism in recent years due to some incidents with their orcas, so much so that in 2016 they announced that they were ending their killer whale breeding program and that the orcas currently still in their care would be the last generation in their parks.

Other animals and exhibitions

As we walked through the grounds of SeaWorld Orlando, we saw many more animals, including flamingos, seals, sea lions, alligators and belugas. The ‘Stingray Lagoon’, where more than 120 rays – some with a wingspan of up to one meter – glide through the waters, deserves special mention. There is also a touch pool here where you can carefully touch the animals.

We had a wonderful day at SeaWorld Orlando and left the park in the late afternoon with all kinds of impressions in our luggage.

The Aquatica Water Park in Orlando

On another day, we paid a visit to Aquatica Water Park, which is the third theme park of the SeaWorld group in Orlando, along with SeaWorld Orlando and Discovery Cove. The park opened in spring 2008 and is located directly across from SeaWorld on International Drive, 10 minutes south of downtown Orlando and 15 minutes from Orlando International Airport.

The Aquatica water park in Orlando

Day admission to Aquatica is currently just under $110 per person (including taxes & fees). This is insanely expensive, especially if you visit the park as a family with children, because children also pay full price from the age of 3! It is worth – as with all amusement parks – to look at the official website beforehand, because there are sometimes very good offers, eg. a combination offer for visiting two or three parks. As with most other theme parks, you pay a separate fee for parking, currently $30 for ‘General Parking’ or $40 for ‘Preferred Parking’ (closer to the entrance). Renting lockers or towels also costs extra. The opening hours of the water park vary depending on the day of the week and the season. Usually the park is open between 10.30 am and 5 pm.

Cheapest day tickets and offers “3 parks for the price of 2” at Attraction Tickets.

At Cutback Cove there is a very large artificial beach with countless sunbeds and umbrellas that can be used free of charge. If you like it a bit more exclusive and private, you can also rent a Beach Front Cabana with up to 4 persons, which costs 100 USD on weekdays and over 200 USD on weekends. For this, towels, a fridge with a few bottles of water, a locker and a fan are included.

We ate something in the park at lunchtime and unfortunately have to say – as in the other SeaWorld parks we visited – that the food is very expensive and unfortunately we did not like it. We find a small bottle of water for 4.50 EUR, a portion of strawberries (5 pieces) for 6 EUR and a portion of lunch (e.g. a cheeseburger with 10 potato chips) for 15 to 20 EUR simply overpriced – and that in a family theme park. It is therefore definitely worth taking some snacks and an empty bottle with you in advance, which you can fill with water for free at the refill stations.

For small children there are two recommended areas in Aquatica. One is Kata’s Kookaburra Cove, which also has smaller slides and water mushrooms for kids. And the other is the 15,000-square-foot Walkabout Waters Area – which is kind of like a giant climbing structure in a shallow pool with slides, ladders, hand water pumps and lots of water. Our little daughter totally loved it here.

The Aquatica water park features, among other things, more than 30 water slides (body, mat and tire slides), two current channels and several lagoons. The park was landscaped to resemble the landscapes of New Zealand, Australia and New Guinea. The main attraction are the two water slides ‘Reef Plunge’, where you slide through a tube through a crystal blue lagoon with black and white Commerson dolphins, leopard sharks and other fish.

Unfortunately, on the day we visited (a Saturday), it was very very crowded in the park: in the Lazy River, people were almost stuck to each other with their tires, and long lines form at the attractions. That’s why we were only on site for about three hours.

All travelogues of our Florida round trip (2022)

Sun, beaches, palm trees, sightseeing, beautiful hotels, pools and the fun of Sea World, Walt Disney & Co.... we were really looking forward to this vacation in Florida. We planed a beautiful itinerary for our almost 3 week trip through the Sunshine State, with places we mostly didn't know yet. In the following travel reports we will tell you about our experiences in Miami, Fort Lauderdale, Fort Myers Beach, Fort Myers, Tampa and Orlando.