In the early hours of the morning we set off from Lake Tahoe to drive along US-395 towards Yosemite National Park. On the way there we wanted to take another attraction that was on the route: the small “town” Bodie.

The history of today’s ghost town of Bodie

Bodie is located at an altitude of 2,554 meters in the Bodie Hills east of the Sierra Nevada and was once a gold mining settlement and western city. Today Bodie is a ghost town,the remains of which can still be visited. How exciting!

It was in 1859, when William S. Bodey came across gold at this point. Unfortunately, Bodey died in a snowstorm in the first winter. His descendants founded the village of Bodie (they changed the spelling to avoid the similarity of his last name to the word “body”) and began mining the first gold in 1861.

In 1876, the mining company discovered a very profitable gold vein, which caused the city to grow rapidly. More and more people and other mine operators settled here, so that already 10,000 people lived here in 1880. The city developed magnificently in its heyday and offered its inhabitants a lot: 65 saloons, 7 breweries, various churches, newspaper publishers, a railway, a Chinese quarter and brothels. This was also associated with a not indisputable number of crimes. Bodie was considered one of the most lawless cities in the Westat that time !

Body’s heyday, however, didn’t last long. From 1881 onwards, mining declined and the mines made little profit. Since gold was the city’s only source of income, homes and businesses were gradually abandoned.

Devastating fires in 1892 and later in 1932 destroyed many of the city’s buildings. In the following years, the mine was still operated by workers from neighbouring towns. In the sixties, however, gold mining was completely abandoned – the last inhabitants left the city.

Throughout the years, Body’s gold mines produced a total of about 100 million U.S. dollars worth of gold.

From Lake Tahoe it is about 170 kilometers to Bodie Town. It took us about 2 hours and 15 minutes to complete the route. From the eastern entrance of Yosemite National Park at Tioga Pass, it is only about 60 kilometers (1 hour) to Bodie. The last section of the line leads east from Highway 395 into the hinterland. This main road CA-270 E is the only connection to Bodie for visitors. There is really nothing to see on the 21 km long road. Most of the route is paved, but the last 5 kilometers are a dusty gravel road littered with potholes,which can only be passed slowly. This section of road takes you back in time and fits exactly what awaits you here in Bodie.

At the entrance of the park a nice ranger was waiting for us, who collected the 8 USD entrance fee per person and pressed an information brochure into our hand. From here you could drive the gravel path to a visitor parking lot. On the way there you could already take a look at the remnants of a cemetery, which can be seen somewhat offset from the village on the left hand on a meadow.

There weren’t that many cars in the visitor’s parking lot. However, the parking lot has clearly filled up during the day. The park is basically open all year round,but the road to Bodie is not passable in winter due to the snowfall. That is, from the first snowfall you can only reach Bodie with skis, snowshoes or snowmobiles 😉

As a rule, you walk through Bodie Town yourself and look at everything in peace. Until now, there were guided special tours on three days a year, for which tickets could be purchased. Most of the time the park was open until 10 p.m. and “Ghost Walks” and a “Ghost Mill Tour” were offered. The visit of the old mine is also possible on other days, but not always. It is best to inform yourself in advance on the official website and at the park ranger at the entrance.

A panoramic picture of the ghost town of Bodie

A map of Bodie

Bodie is a National Historic Landmark, a California Historical Landmark located in the California State Parks since 1962. Due to the low humidity, many buildings, appliances and cars are still in good condition, making Bodie the best-preserved ghost town in the United States today. On the following map you get a good overview of the location of the different, still preserved buildings. 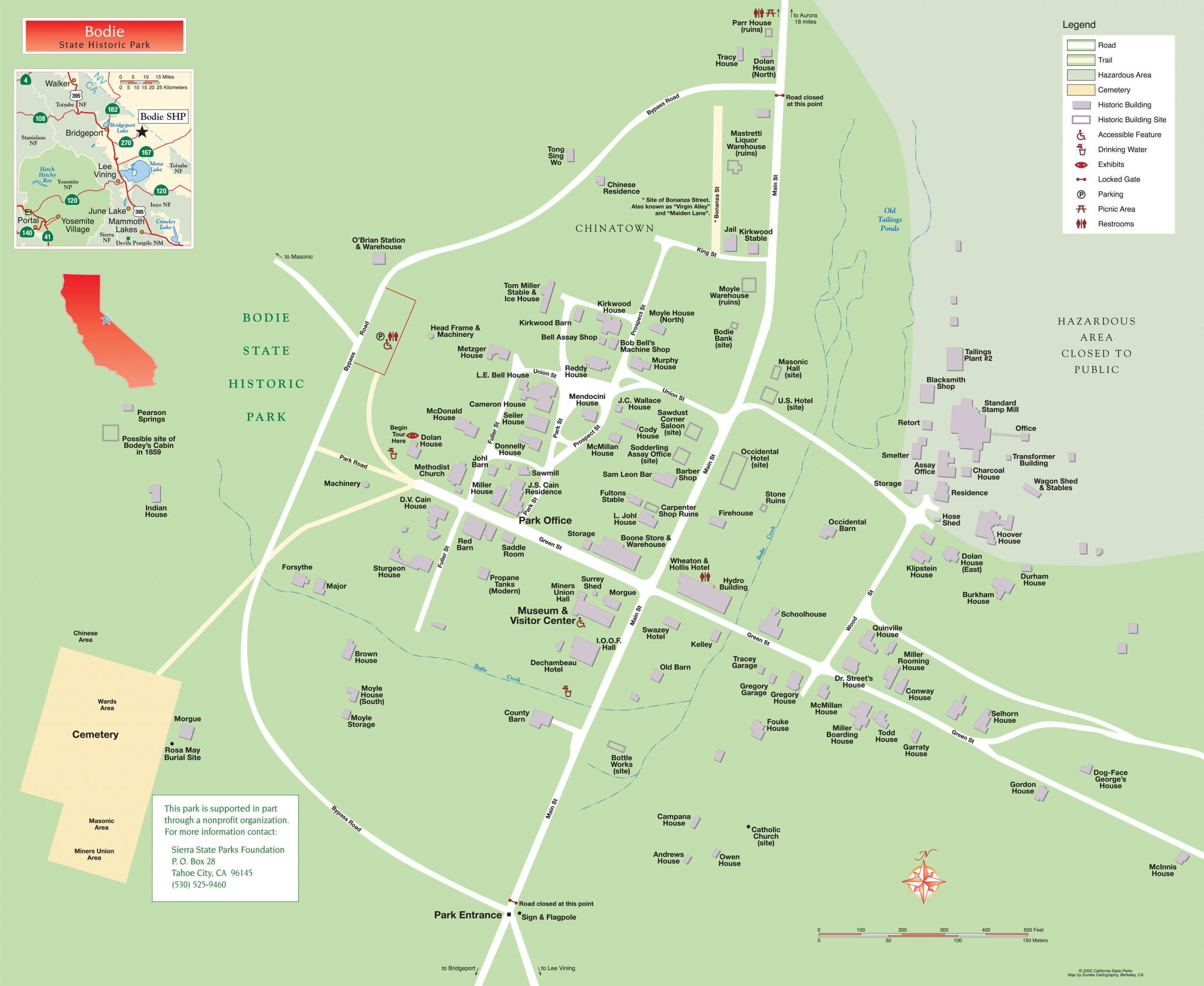 A map of the ghost town of Bodie in California

The different buildings in Bodie

We walked through the deserted streets and neighborhoods of Bodie for about two hours in the best weather and discovered great photo motifs again and again. There are still about 170 buildings,such as houses, a church, a school, an old bank building, the old fire brigade, a shop, a saloon, a hairdresser, various old hotels as well as the large mine area.

A look into the old houses

You can move freely in the old city. Most of the houses are not accessible, but in a few buildings you can actually take a look and walk in. You feel like time has stopped here. Everything still stands as if the city was still inhabited until a few years ago. Good, some dust and dirt has come 😉 The special thing here is that the buildings are not restored, but are only preserved and thus protected from decay.

The highlight of the terrain are certainly also the old rusting car wrecks (e.g. a Chevy Coupe from 1937), which we found here and which give super nice photo motifs. There is also an old Shell filling station,which is recognizable by its fuel pumps.

The Great Gold Mining Mine

We would also have liked to visit the large gold mining mine, but unfortunately it is closed by default and not accessible. But you can take part in guided 50-minute tours here, which are certainly totally exciting. Unfortunately, no guided tour was offered on the day we were in Bodie.

So that you can really enjoy the great atmosphere that prevails here in Bodie, there are no shops or stalls. So you should stock up on food and drinks beforehand when you come here. However, there is a small museumwhere you can get a lot of information and marvel at relics from ancient times. You can also buy books and a few souvenirs here. It is also best to find out about the daily mine tours offered here.

We really liked the tour through the dusty streets of Bodie. It was very interesting to be taken back in time and to imagine how the inhabitants lived here and how the city was once filled with life. The weather was also great: we had a bright blue sky and the sun shone again like anything else. A great day!