After our sightseeing stops in Northern Cyprus we wanted to explore the most important sights of Southern Cyprus, because also the south of the island has all sorts of interesting and interesting things to offer. It would have been almost impossible for us to look at all the main attractions of Cyprus in one week. So we just picked out a few things that we could easily reach by car from our Hotel Acapulco Beach Resort & SPA in Kyrenia. We would like to introduce you to you here.

Map of the Tourist Attractions in Southern Cyprus

In Google MyMaps we have put together a map and entered all the important sights in Southern Cyprus.

The Painted Churches in the Troodos Area

Ten of the more than 25 painted barn roof churcheslocated in the Troodos Mountains of southern Cyprus were included in the UNESCO World Heritage List in 1985. The barn roof churches, built in the typical Cypriot style, owe their name to their appearance: coarse stones, deep-drawn shingle roofs and the fact that there is no church tower make them look like barns. From the outside, they also look relatively inconspicuous. But as soon as you enter one of the churches, you can see the colourful and partly well-preserved frescoes on the walls. Very impressive.

On our tour of the Troodos Mountains we visited a total of four of the UNESCO barn roof churches: Panagia tis Asinou, Archangelos Michail (Pedoulas), Panagia tou Moutoulla and Agios Ioannis Lampadistis. 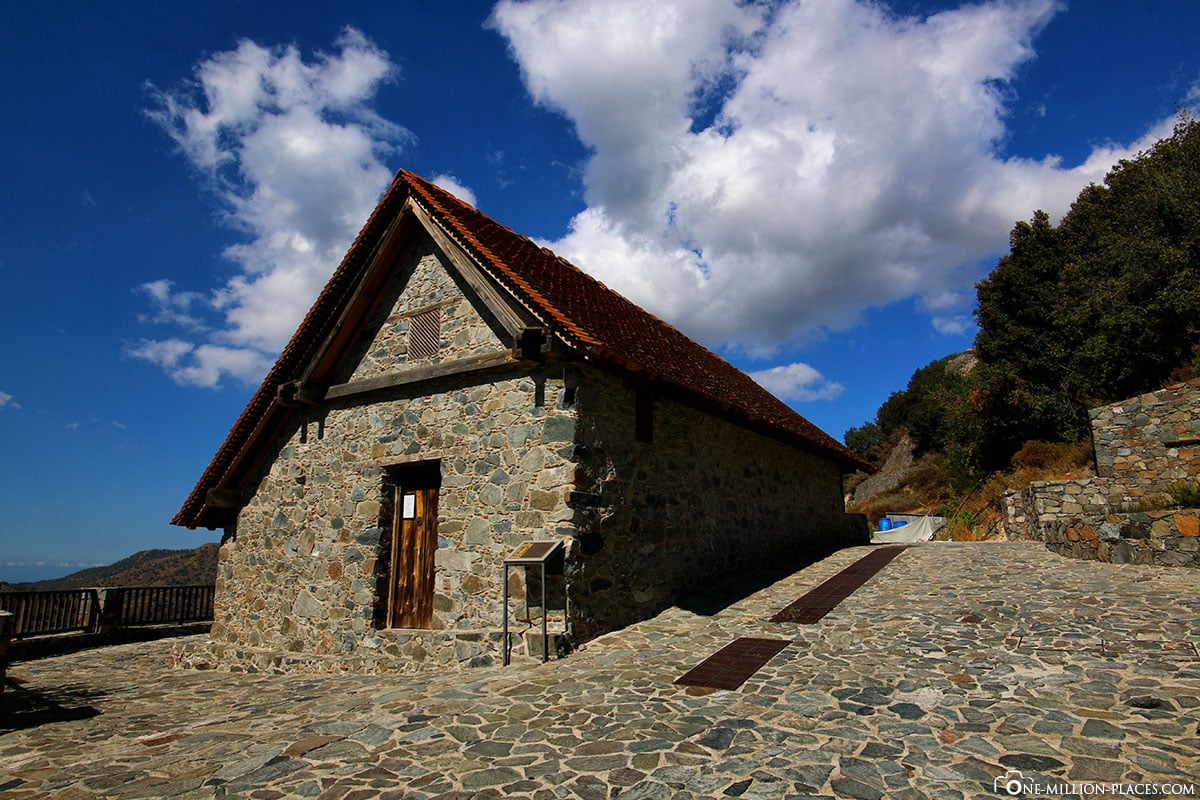 The first church we had visited (Panagia tis Asinou) was also best enjoyed, as the church was solitary and the wall malries were very well preserved inside. In addition, we were the only visitors here, so that we could see everything in peace.

The Kykkos Monastery & the Monument of Makario

Also in the Troodos Mountains, at an altitude of 1,140 metres on the slope of a ridge, is the monastery of Kykkos, which can only be reached via a serpentine but very well developed road. Parking is available right in front of the monastery and access is free for visitors. If you do not have the appropriate clothes for a monastery (knee-covering), you can borrow a corresponding cape at the entrance. The monastery was founded in the 12th century, but the buildings – i.e. a church, the courtyard, the museum buildings and the monastery passages – were destroyed due to earthquakes and fires in the 19th and completely rebuilt in the 20th century. We particularly liked the two courtyards of the monastery, which are surrounded by arches and magnificently decorated with frescoes and mosaics walkways and galleries.

About two kilometres from the monastery, the monument of Makario on Mount Throni is located on a hill already visible from a distance. Here is also the tomb of Archbishop Makarios III, which is always guarded by soldiers. The archbishop and former president of the Republic of Cyprus has spent several years in the monastery of Kykkos – for this reason his tomb is also not far from the monastery.

Stavrovouni Monastery is located about 40 minutes’ drive west of Larnaca and 40 minutes south of Nicosia on a rocky peak at an altitude of about 750 metres. After driving along a very winding road and arriving at the top, you will see a small church and will be rewarded with a great view of the surrounding area. A few meters further you stand at the gates of the actual monastery, from here you can also take a look at the monastery. We had already read in advance on the Internet that only men are allowed in here. But unfortunately we have read over that one can only enter the monastery with appropriate clothing, i.e. long top and long trousers. We didn’t have it. But since the monastery had closed for three hours anyway over noon, a visit was unnecessary anyway.

About 5 kilometers south of Larnaca is the mosque Hala-Sultan-Tekke. It was built in 648 A.D., renovated in 1816 and is considered one of the most important sanctuaries of Islam. The location of the mosque is particularly impressive: surrounded by palm trees on the edge of a large salt lake (which unfortunately had just dried up here), in which flamingos usually live.

On the south-eastern coast of south-eastern Cyprus is Agia Napa, a small place known for beach and party holidays and overpopulated by tourists in the summer months. On the eastern edge of the village is a 20,000 square metre sculpture park,which is accessible free of charge and offers an extensive collection of sculptures by more than 50 artists from all over the world.

The Starbucks Island Cup of Cyprus