After breakfast at our Hotel Park Inn by Radisson Cape Town Foreshore, our first visit to the famous Victoria & Alfred Waterfront in Cape Town and a visit to the Two Oceans Aquarium were our first on our agenda today.

Worth knowing about Cape Town

Cape Town is the second largest cityin South Africa after Johannesburg with a population of around 4 million. The city was named after the “Cape of Good Hope”, which is located about 45 kilometers to the south and posed a major danger to shipping by sea to India. The Cape Town skyline is dominated by the 1,087-metre-high Table Mountain,Signal Hill, Lion’s Head and Devil’s Peak.

The climate is influenced by the Atlantic: in the summer months of December to February, the monthly maximums are around 25° C and in the winter months of July and August 17° C. The University of Cape Town is one of the oldest universities on the African continent. To the In addition to Table Mountain, the most popular sights include the Victoria & Alfred Waterfront (built on the model of the Waterfront in San Francisco), the Castle of Good Hope, the Kirstenbosch Botanical Garden, Long Street, the Prison Island of Robben Island and the beaches of the tourist suburbs of Camps Bay and Clifton. 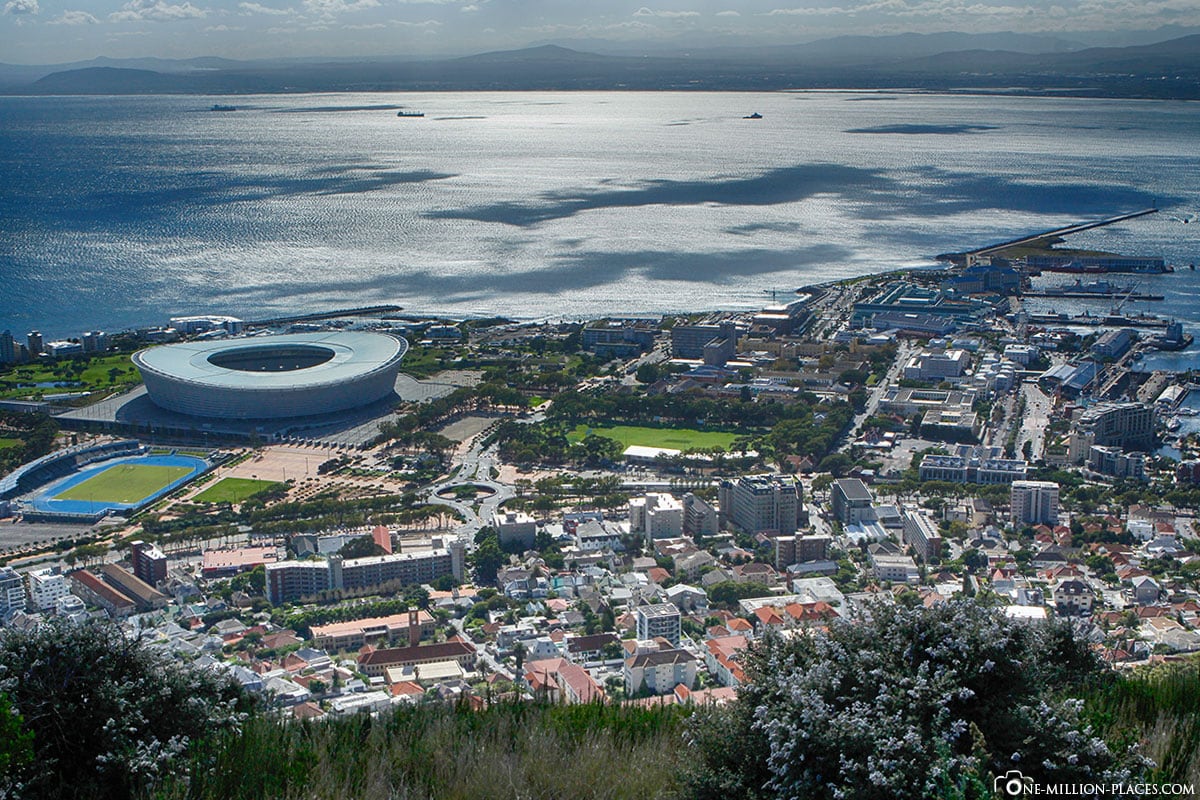 View of Cape Town, the Waterfront and the Olympic Stadium

The restored Victoria & Alfred Waterfront harbour and shipyard district around the port’s two historic basins is THE visitor magnet in Cape Town. The harbour district was named in honour of Queen Victoria and her son Prince Alfred and is well known for its diverse leisure and entertainment options. Be it the street musicians, the regularly inandling and departing excursion and fishing boats, the Ferris wheel, the countless bars and restaurants or the large malls King’s Wharehouse and Victoria Wharf – there is something for everyone here. 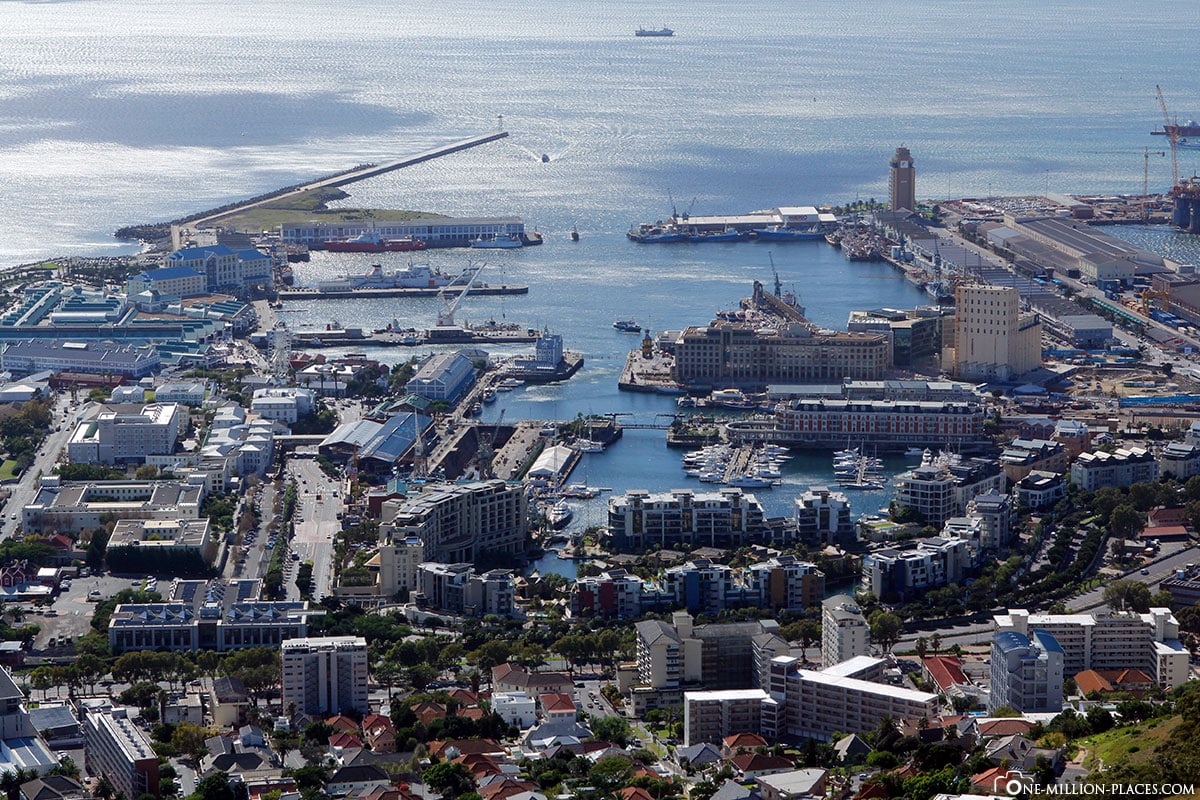 View of the Victoria & Alfred Waterfront

The Market Plaza is considered the center of the V&A Waterfront. There is a stage here, where events and performances take place regularly, as well as a public gallery. A beautiful photo motif is Nobel Square,where the bronze figures of four Nobel laureates of the country stand: Nelson Mandela, Frederik Willem de Klerk, Desmond Tutu and Albert John Luthuli. The figures are set up in such a way that they have the Table Mountain in the back.

A few minutes walk from here is another great photo motif: the yellow photo frame. On Google Maps you can find it by entering “MARC VISTAS TABLE MOUNTAIN”. The yellow frame frames the Table Mountain in the background and puts it perfectly in the scene. If you walk over the “Marina Swing Bridge” drawbridge, you will reach the yellow-black Clock Tower, which houses a modern visitor centre or tourist information centre. By the way, the boats go right next to it to Robben Island. If you take a close look around, you can also see some seals (Cape Fur Seals)that romp directly at the pier in the sun.

Since we are big fans of the underwater world, a visit to the aquarium could not be missing. The Two Oceans Aquarium shows visitors the diversity of marine life from the two oceans that meet in South Africa: the Indian Ocean and the Atlantic Ocean. The aquarium was opened in 1995 and houses 3,000 live marine animals, including sharks, fish, turtles and penguins. We particularly liked the public feeding times, for example with the penguins. It is best to inform yourself directly at the entrance about the exact times.

Our tip: If you already know that you want to go to the aquarium, you can also buy the tickets online and save something.

The city centre of Cape Town doesn’t have a lot to offer, so we strolled through it for a short time and then took a walk through the Company’s Garden. In the park in the centre of Cape Town there are countless plants, but also some monuments, fountains and lots of squirrels. You can’t get past the little cute park-dwellers, who are by the way very tame. 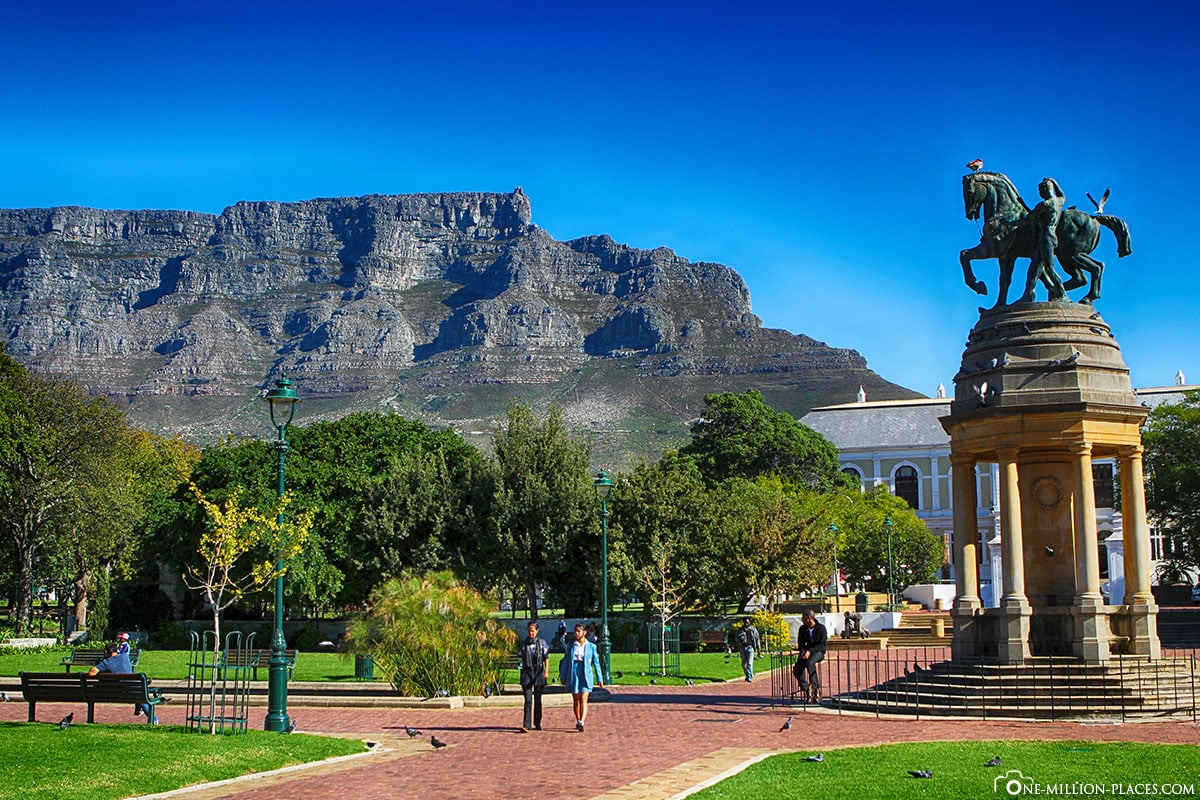 From the park we walked back to our hotel on the busiest street in the city, Long Street. Here you will find plenty of junk and antique shops, hotels, restaurants and bars. 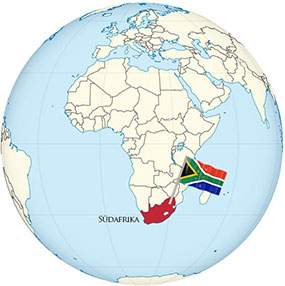