For the visit of the Cypriot capital Nicosia, which is located right in the center of the island, we had planned a whole day. Since our hotel Acapulco Beach Resort & SPA was located on the Turkish side of Cyprus in Kyrenia, we parked our car in the northern part of Nicosia, very close to the Kyrenia Gate. There is plenty of parking here in the middle of the city and for a whole day parking you pay just 5 lira (which is about 1.20 euros). From here we were able to start our city tour.

Things to know about Nicosia

Nicosia is divided into two halves: the northern part of Nicosia (also called Lefkoa) belongs to the Turkish Republic of Northern Cyprus and the southern part of Nicosia (also called Lefkosia) to the Republic of Cyprus. The city is divided by a “green line” overseen by United Nations peacekeepers. The history of Nicosia dates back to the 7th century BC. In the years 1567/1568 a nearly five kilometer long Venetian fortress wall was built, which encloses the old town with eleven bastions star-shaped. We have gathered even more on the history of Cyprus in this article. 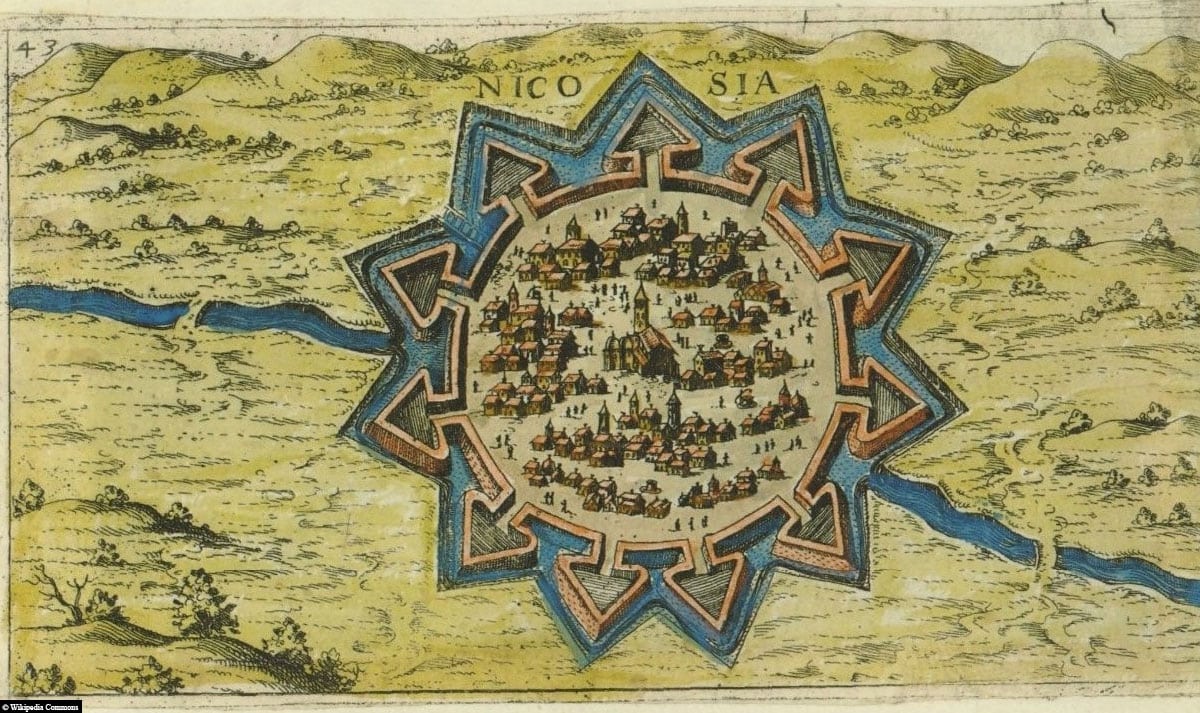 Especially from the air you can still see the course of the old city wall in Nicosia. 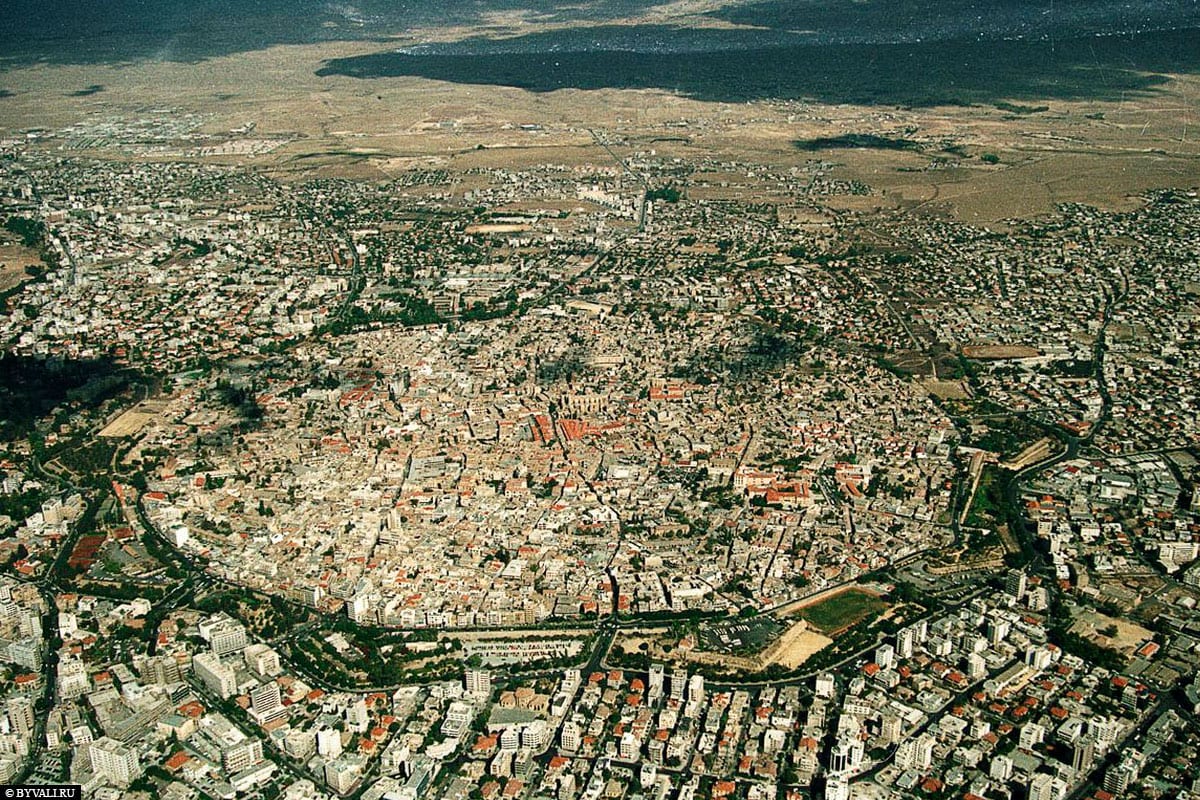 The sights in the north of Nicosia

The 18th century Arif Pasha aqueduct is located near Ercan Airport and was on our way to Nicosia, so we visited it. It was built at that time to transport water to a large farm nearby. This is said to have belonged to Arif Pasha, hence the name of the aqueduct.

Hala Sultan Camii Mosque is right next to a major highway just outside Nicosia. It was still under construction and therefore could not be visited. But we found that she looked very nice from the outside, so we also made a short photo stop here. 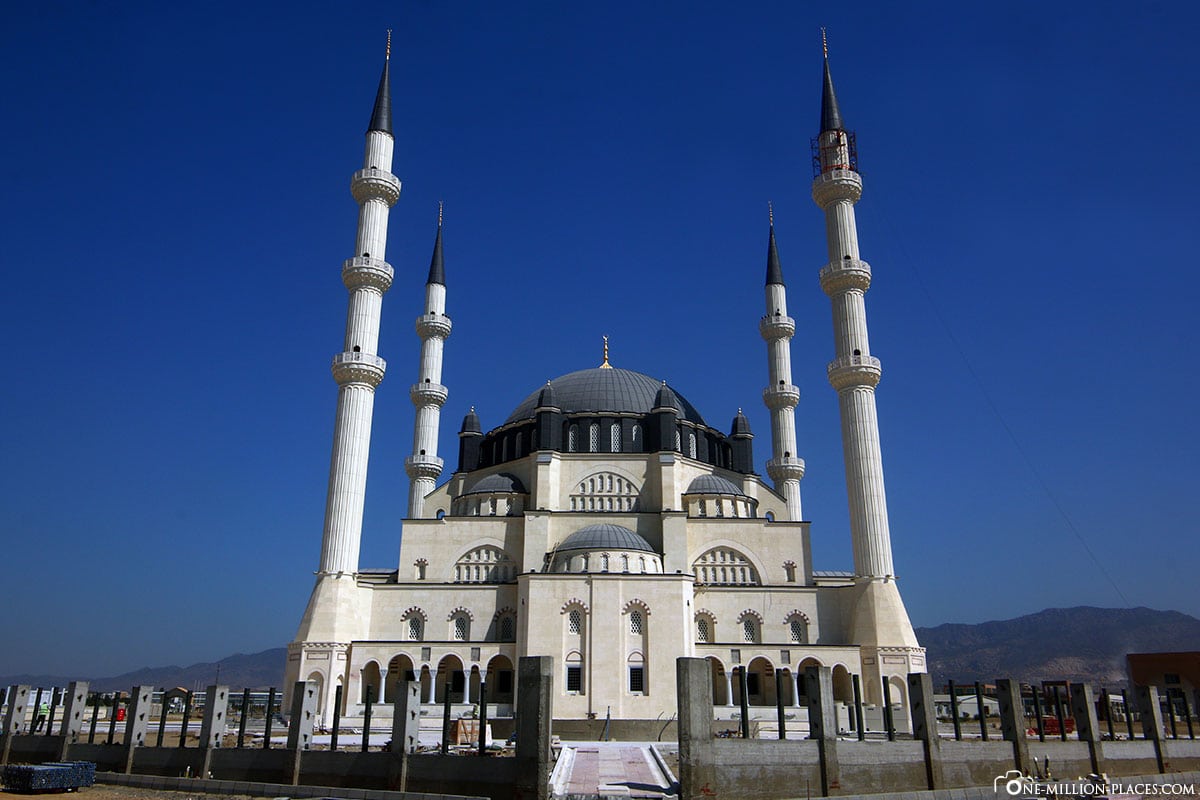 The city gate is one of several gates of the city wall that surrounds Nicosia. Kyrenia Gate is now located on a small traffic island and is home to the tourist information. Unfortunately, the information was closed when we were here at noon. 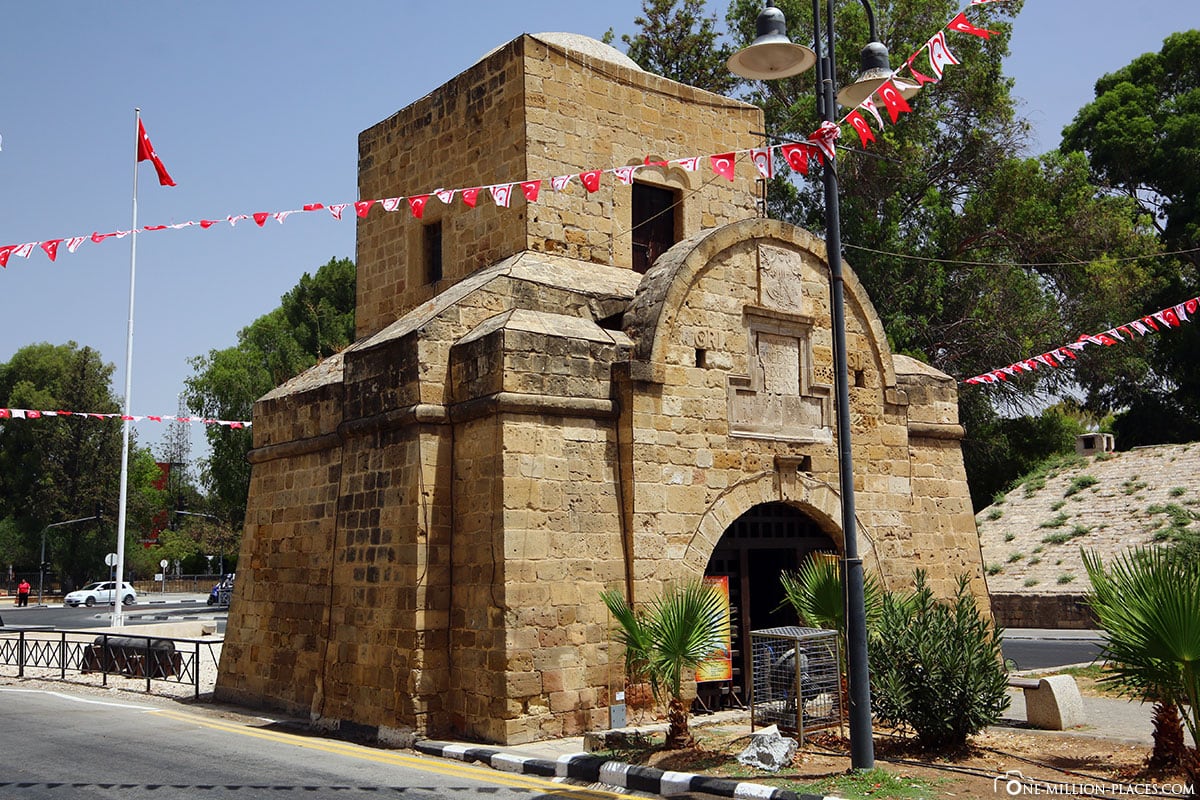 Continuing from Kyrenia Gate into the Old Town, you will automatically pass the historic building of the Court, which was built in colonial style. Directly opposite is a square with an obelisk, which invites you to linger. 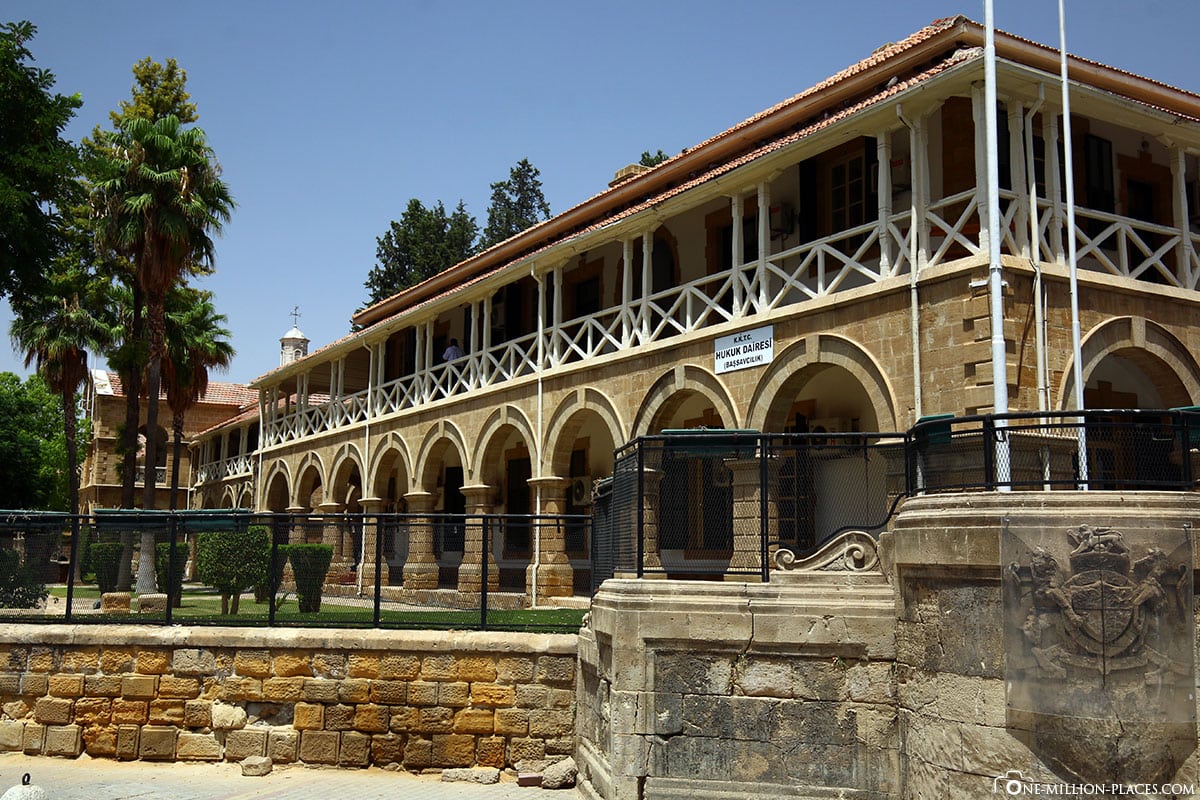 The next port of call was the old caravanserai Büyük Han, which was built in 1572 and used to offer travellers (caravans) a place to sleep and a food supply point. Today, in the square courtyard, surrounded by arcades, there is a small dome mosque. Restaurants and small local shops can be found all around. We really liked the atmosphere that prevailed in Büyük Han.

About 100 meters north of the border is the Selimiye Mosque, whichis already visible from afar and was built in the 13th century as the Gothic St. Sophia Cathedral. In 1571 it was converted into a mosque by the Ottomans by adding two minarets. Here, too, the interior is rather sober and unspectacular, since – according to Islamic guidelines – all pictorial jewellery has been removed.

A few meters walk from the Selimiye Mosque there is a market hall (Bandabuliya)where you can buy all kinds of meat, vegetables, fruits and souvenirs. We have definitely seen nicer market halls, but if you are here anyway, a short walk through the hall is worthwhile.

The Ledrastraße border crossing in Nicosia

After we had completed our sightseeing tour in the north, we wanted to use the border crossing at Ledrastraße (which is only open to pedestrians). As at all other border crossings in the country, you have to leave the Turkish Republic of Northern Cyprus at the first border post before you can enter the EU (Republic of Cyprus) a few meters further. In between is no man’s land – a wide section marked by barbed wire and walls. Small tip: At the border posts there are small information houses of the tourist associations, where you can get city maps and further information about the respective part of the island. 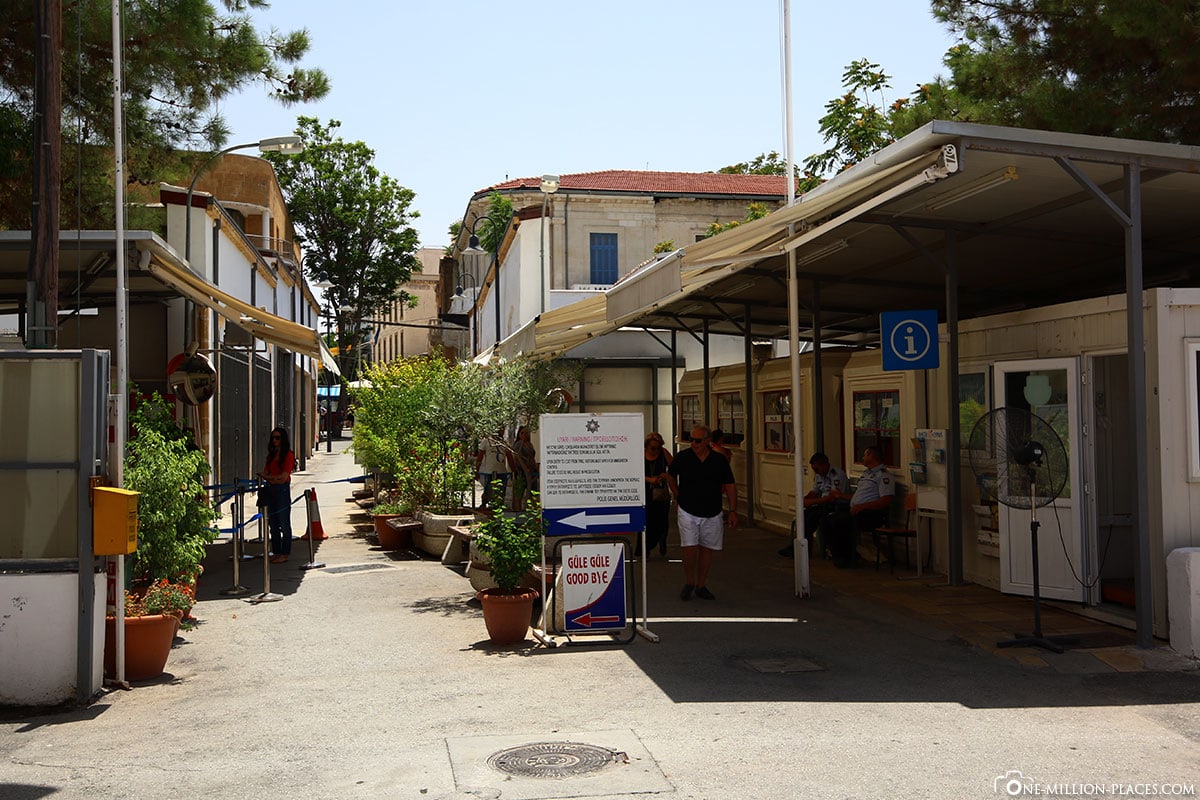 The sights in the south of Nicosia

Ledra Street in the southern part is a beautiful pedestrian street covered with yellow and white sun sails. Definitely a good thing in the heat that prevails here in the old town streets. Here on the street are also the large and modern, western shops, such as H&M, Starbucks, McDonald’s etc. In the side streets you will also find more traditional shops selling local products and many beautiful churches. At the end of Ledrastraße is the town hallon Freedom Square.

From the town hall you can easily explore the Venetian fortress wall, which was built in the 16th century. Over a distance of just over five kilometres, it encloses the old town with eleven heart-shaped bastions. On one of the bastions is the Freedom Monument,which is meant to commemorate the liberation from the British colonial power. The former main gate to the city centre was the Famagusta Gate, which is also part of the city wall. Today, it hosts various cultural events.

Other sights within the city walls include the single-nave St. John’s Cathedral (Agios Ioannis) and the archdiocese palacenext door, which is considered the headquarters of the Orthodox Church of Cyprus. Here lived, among other things, the first archbishop and at the same time the first president of Cyprus, Makarios III, whose tomb we had already seen in the Troodos Mountains. In front of the palace, a 7-metre-high statue of honour commemorates him. There is also an icon museum, a folklore museum, the National Struggle Museum and a cultural centre with a library.

At the end of our city tour in the southern part of the city we took a panoramic view of the city. On the tallest building in the city centre, the Shacolas Tower, you can view the city from the observation deck for 2.50 euros entrance fee. There is no possibility of going out here, but there is much more information about the division of Cyprus in the context of a short video.

Overall, we particularly liked the old town with its many colourful streets and small shops. However, it was also about 40 degrees hot on this day – and in such a heat a city exploration is only partly fun and is insanely exhausting. Nevertheless, we have gained a good overview of the city 🙂