After our exhausting hike on the Koko Crater Railway Trail in the morning, we were really looking forward to a cool refreshment in Hanauma Bay.

Hanauma Bay on the island of Oahu

Hanauma Bay is not a public, free beach, but is a bit reminiscent of a small amusement park. First of all, as a tourist or non-Hawaiian at the checkout you pay 7.50 US dollars entrance fee per person. The opening hours are every day from 6 a.m. to 7 a.m. Only on Tuesdays the bay is completely closed.

We had already parked our rental car in the morning before the hike to Koko Crater in the Hanauma Bay car park, where you can park all day for 1 US dollars. We just grabbed our bathing suits and then went directly to the entrance of Hanauma Bay. When we passed here in 2015 during our world tour, the parking lot was already closed in the early morning due to overcrowding. So it’s always worth being there quite early. 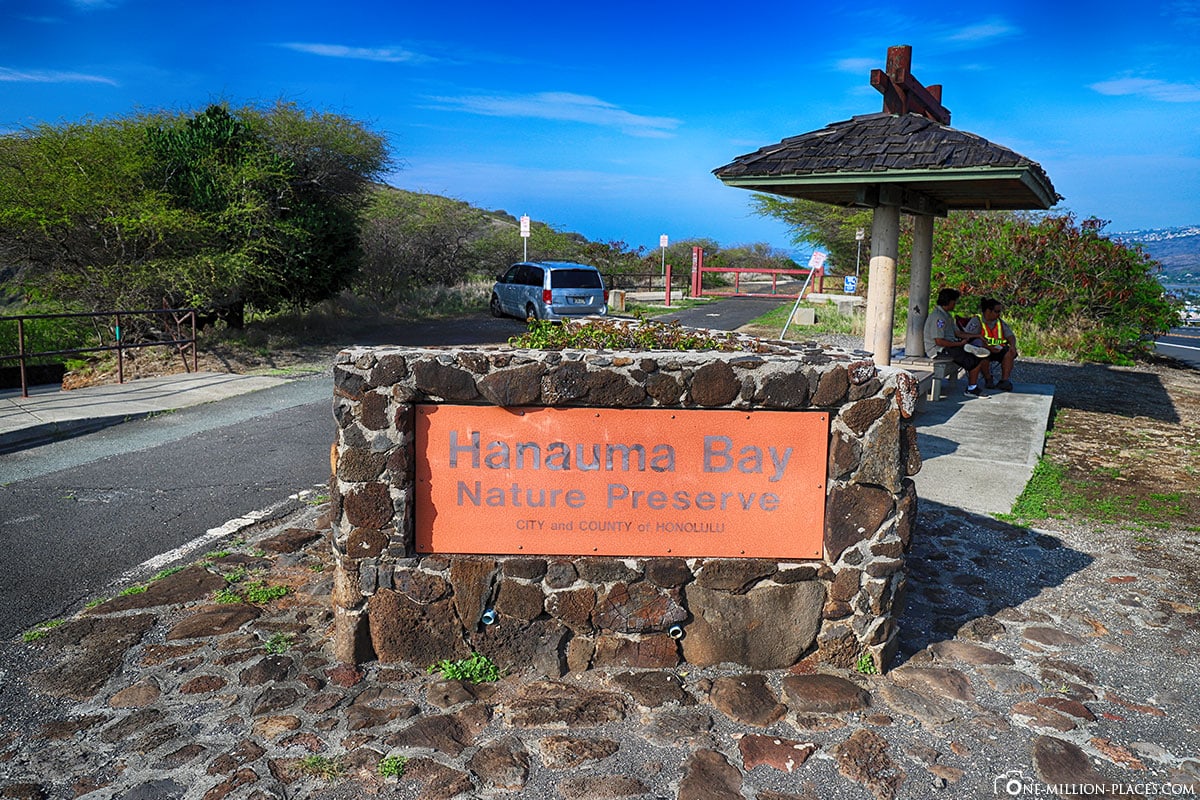 The entrance to Hanauma Bay

After the entrance you come to an area that looks like a small museum – here you can find out about the origin of the bay and its present existence as a nature reserve. Hanauma Bay was once a volcanic crater that has since been extinct and flooded by waves. Today, Hanauma Bay is one of the most popular tourist spots on the island, especially when it comes to snorkeling.

A mandatory part of the visit is to watch a video in your own theatre, which deals with the rules of conduct in the bay. Only when you have watched this film, you are allowed to go down to the beach. There are two ways to get down into the bay from above: you can walk the path yourself or take the 500 meters with a small express train. That costs 1 US dollar down and 1.25 US dollars up. You can’t believe how many people are actually taking advantage of this 🙂

We decided to run and were able to take some beautiful pictures of Hanauma Bay from above. 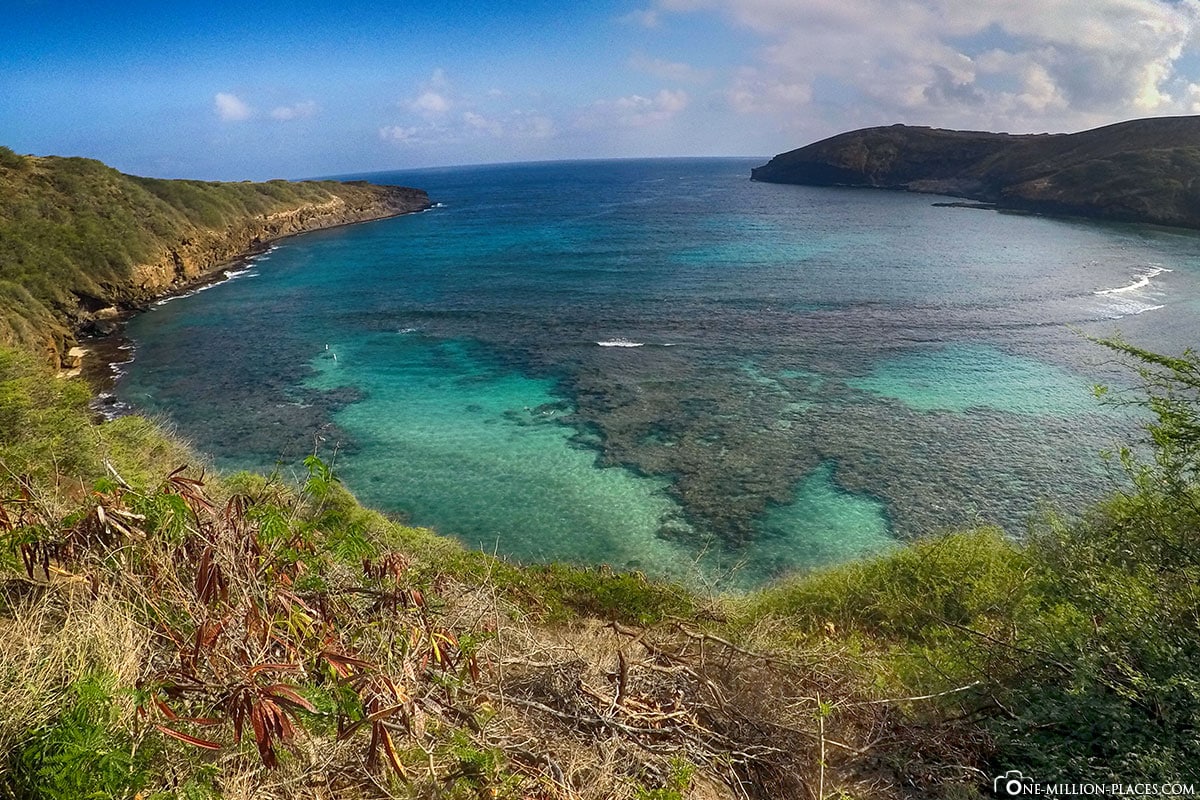 Once we have reached the bottom, we have tried to orientate ourselves: there are stations where you can rent snorkeling equipment, a small education center where you can find out about the biodiversity in Hanauma Bay and several cottages with toilets, showers etc. By the way, you are looking for a snack or kiosk at the bottom of the beach in vain; Food options are only available at the top of the entrance. Since the sun was already burning a lot around noon, we first secured a shady place on a large meadow and relaxed a bit.

However, it didn’t take us half an hour to get in the water 🙂 The curiosity was a bit too great: We read in advance all over the internet that Hanauma Bay should be the most beautiful snorkeling spot of all Oahu. So we were very excited about what we would see. We have already snorkeled in many places around the world, so we were disappointed by the snorkeling in Hanauma Bay: Many of the corals that were once there are now dead or broken and the water was also slightly cloudy. You can really see a lot of doctor fish, pusher fish, parrotfish, butterfly fish, yellow sailfin doctor fish and lots of other small fish. If you are lucky, you will also find moray eels and turtles here. However, we did not see them today. Nevertheless, we were safely in the water for 45 minutes and snorkeled around the bay. In between we were able to discover some beautiful swarms that slowly passed us. And the loud sounds of the parrotfish when they eat coral are also fascinating every time.

Our video of snorkeling

Here you will find a short video of snorkelling in Hanauma Bay.

After our snorkeling trip we relaxed on the meadow and after about three hours we went back to the car.

Is it worth a visit to Hanauma Bay?

A visit to Hanauma Bay is always worthwhile, because the bay itself is simply beautiful. The beach is beautifully landscaped with a large green meadow and many palm trees. You always find a spot where not dozens of other people lie next to you. On the beach itself it is of course already slightly overcrowded, which did not bother us. Snorkeling is definitely fun and is also very easy to do in the protected bay. A little further out there are of course also a few small waves, but especially the front area is ideal for those who may not yet have so much experience with snorkeling. Overall, you can definitely spend a nice day here. 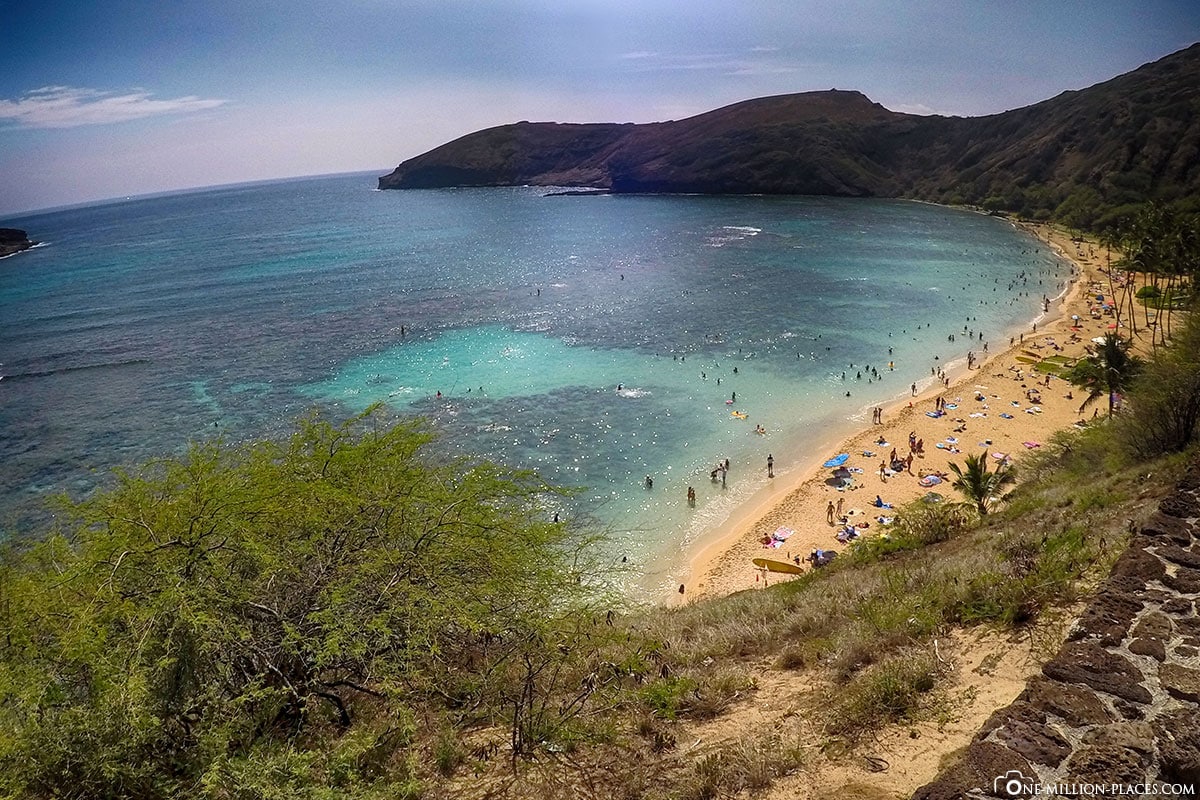 Hanauma Bay with the beach

Since the Halona Blowhole is not so far away from Hanauma Bay and we hadn’t made a sightseeing stop here before, we wanted to make up for it quickly. Within 5 minutes we had already reached the Halona Blowhole Lookout. As at many points on the island, there is also a large parking lot and a viewing platform.

The last time we were in Hawaii, we could even see humpback whales from here. However, they can only be seen in winter. Another interesting attraction is the Blowhole, which can be seen at the top of the observation deck. On days when the tide is high and the wind is strong, powerful waves are sent to the coast. Here the water then splashes through a cavernous rock formation and shoots – like a geyser – high into the air. A beautiful natural spectacle, which we have already seen in other places in the world. But it’s always very impressive. Today, however, the conditions for the blowhole were not good, so that very little water was always pushed up from the hole.

The Malasadas of Leonard’s Bakery

On the way back to Honolulu we made a stop at a small shopping center(link in Google Maps). The reason for the stopwasm was not the shopping center itself, but a red-and-white striped food truck that stood in the parking lot. This is the Malasada Mobile from Leonard’s Bakery. Die-hard Hawaii Five-O fans may be a household name, as the sweet particles have been around a few times in the series. The Malasadas are Portuguese doughnuts without a hole,baked in fat so that they are golden brown on the outside and light and fluffy inside. Finally, they are rolled in sugar. Malasadas has been around on Oahu since 1953 and the aim was to build on the Portuguese tradition of Christmas Tuesday. Although the Malasadas are also very greasy, they taste very tasty. They reminded us very much of the German quark 🙂 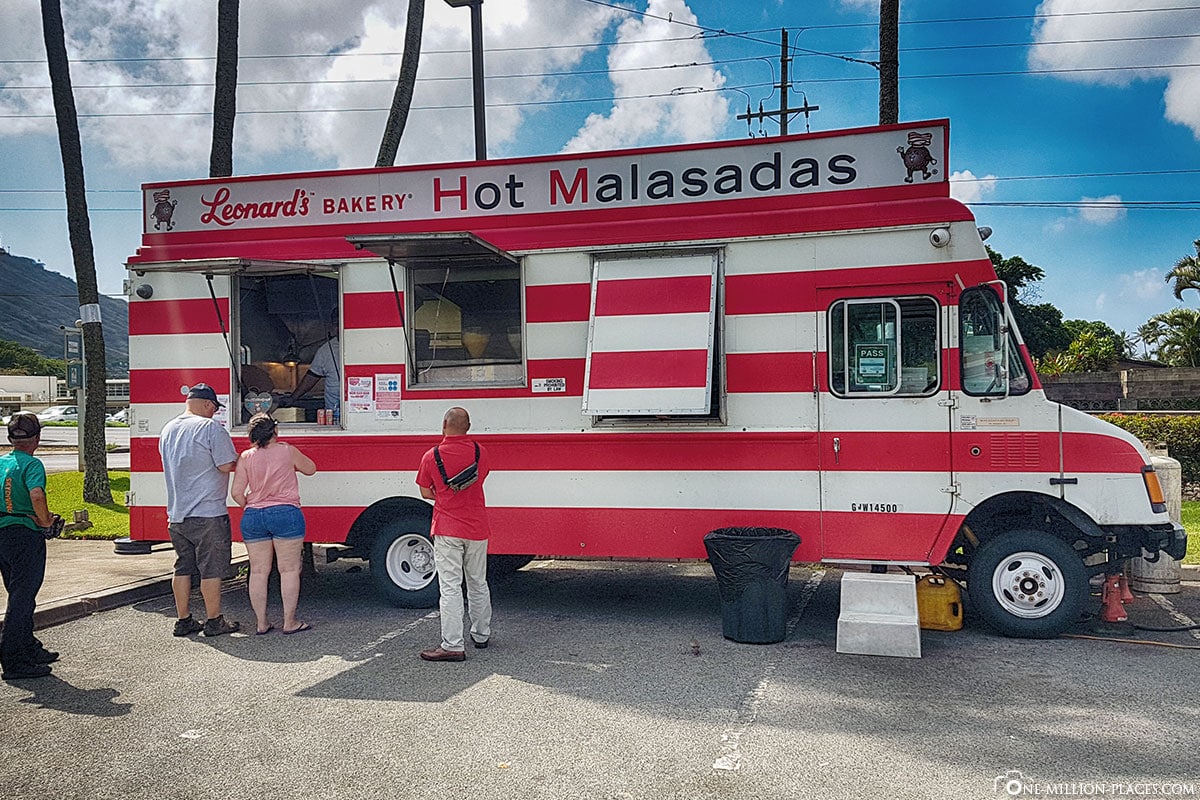 The Food Truck of Leonard’s Bakery