Today the Road to Hana was on our daily program. We drove along the panoramic road on the north coast of Maui on our world tour in 2015, but unfortunately we had to turn around halfway because the weather was so bad. Now there was a second chance and with definitely better weather 🙂

The Road to Hana & the Piilani Highway

If you want to drive around the entire island of Maui, you can do this on the Road to Hana and the Piilani Highway. This round trip around the island is a good 200 kilometers long and it takes a whole day to drive along this route with its 600 hairpin bends, 54 narrow bridges, countless waterfalls and viewpoints. The Road to Hana is the 103 km long Hana Highway that runs from Kahului to Kalepa Point in the southeast of the island. From there, the Hana Highway goes into Piilani Highway 31 until it finally arrives in Kahului.

The Turtles at Ho’okipa Beach Park

The first viewpoint on the Road to Hana is Ho’okipa Beach Park with the Hookipa Lookout (Google Maps). This is the best spot to watch the surfers on the north coast of Maui.

But the Ho’okipa Beach Park has another highlight, which is located at the bottom of the beach. Standing on the beach below and looking at the ocean, there is a place on the far right of the beach where sea turtles cometo rest. We hadn’t seen this place and the sea turtles on our last visit to Maui.

And we were really lucky. There were already a handful of turtles on the beach and every minute there were more. One by one came out of the water and lay down on the beach, others went back into the sea. At peak times we counted here 14 pieces, which were at the same time on the beach. Sometimes you couldn’t tell if you saw a grey rock or the armor of a turtle 😉

As with Punalu’u Black Sand Beach on Big Island, the area was also cordoned off and provided with signs to provide shelter and tranquility for the turtles. 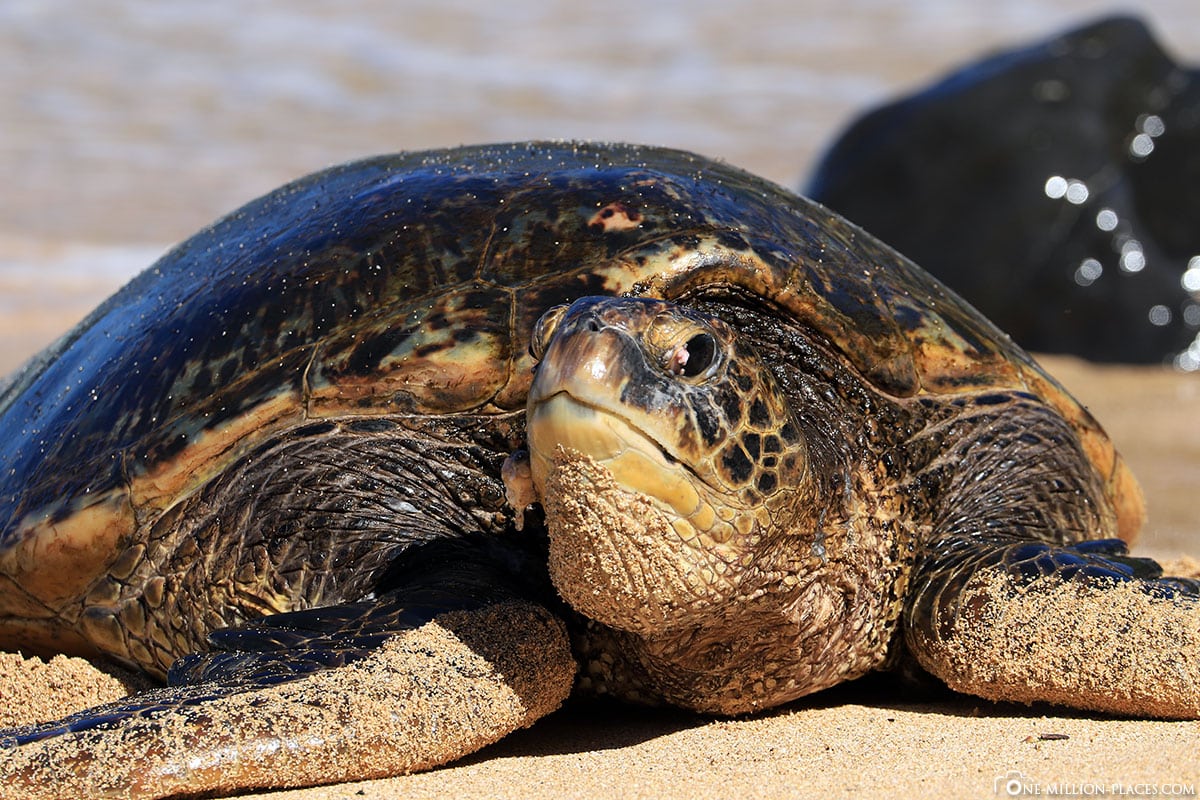 The panoramic road Road to Hana

After Ho’okipa Beach Park, the Road to Hana runs through lush green landscapes of the Haiku-Pauwela region before becoming more and more winding along the coast. Great views of the ocean followed by waterfalls. Nature is truly unique here. In the middle of the route you can also pass a bamboo forest. The place can be seen very well, because here on the right and left side are a lot of cars of tourists, all of whom have entered the bamboo forest on the right. We visited the bamboo forest already in 2015 on our world tour. The fact that after a few steps into the forest you stand in a sea of densely grown, meter-high bamboo is already very impressive.

The small town of Hana on the east coast of Maui

At some point you reach the small town of Hana. But one should not expect too much here, the place is really very scattered and with its approx. 1,200 inhabitants also very small. There is a public beach (Hana Bay Beach Park), a few restaurants and food trucks, fruit stalls on the street, a few small supermarkets and with the Travaasa Hana a larger hotel, whose room rates are about 500 € per night but are beyond good and evil. If you are looking for more accommodation, you will only find a few private apartments or cottages.

Since there is really not much to see here, we ate something (very tasty) at one of the many food trucks and then drove further south. At our lunch we made a nice acquaintance with a very nice Hawaiian who told us about his life. He has a farm here on Maui and lives from his plantation economy. And as chance would have it: He has German relatives and currently works on his farm a German who is doing his voluntary service here. He likes the punctuality and reliability of the Germans – these were the last words before we said goodbye to him. What a nice encounter.

The Seven Sacred Pools at Ohe’o

The next stop was the Seven Sacred Pools at Ohe’o, which are part of Haleakala National Park, which means you need your Hawaii Tri-Park Annual Pass, your 3-day ticket or you pay extra admission.

The Kipahulu Visitor Center is located right next to the car park. From there it is a short hike on the Kuloa Point Trail (800 meters round trail) to the pools of Ohe’o, which are terraced and fed by waterfalls. Basically you can go swimming in these pools. When we were there, however, the basins were closed for safety reasons.

We didn’t do the 3.2 kilometer hike (one-way) to the Waimoku Falls on the Pipiwai Trail, because it was just too late for that today and we still had about 90 kilometers of track in front of us. 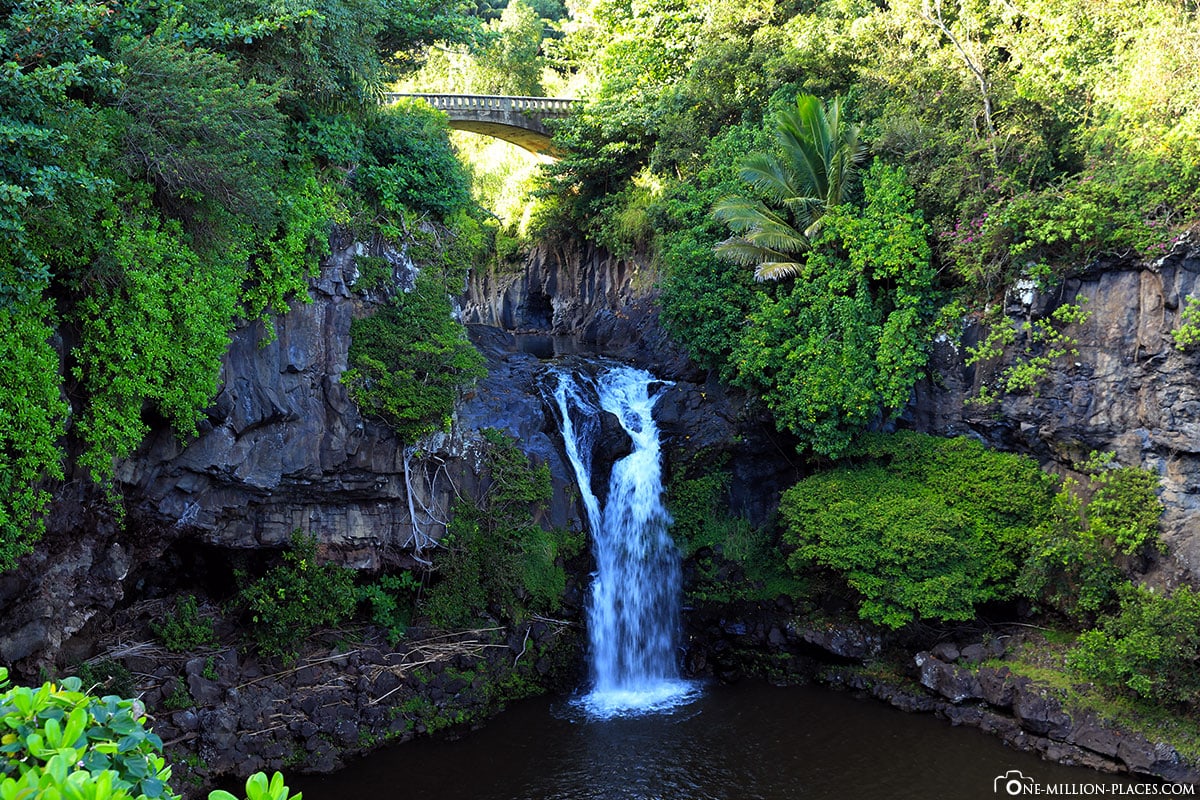 The Piilani Highway in the south of Maui

A few kilometers after the Pools of O’heo, Hana Highway 360 passes into Piilani Highway 31. This section of the island round trip is warned by most car rental companies, because the road is not continuously tarred. In the worst case, if an accident happens, you risk your insurance cover – at least that’s the rule with some car rental companies.

The name Piilani Highway is also somewhat misleading, because the road has absolutely nothing to do with a highway at this point 🙂 As already mentioned, the road is partly really poorly developed, in many places very narrow and also not asphalted. We were at least lucky that it hadn’t rained before, otherwise this section on the south coast of Maui is certainly a bit uncomfortable to drive.

In addition to the partly narrow road, the low sun can also cause problems if you drive the hilly Piilani Highway westwards in the late afternoon. On some hills you have the feeling of sitting in a roller coaster at the appropriate speed 🙂

But the route is still very interesting and always offers great views of the coast or the mountain landscape of Maui. Shortly before sunset we stopped at the road, got out and watched the sun set behind the uninhabited neighbouring island of Kaho’olawe.