The Bay of Kotor and the associated town on the Adriatic coast of Montenegro were the 2nd stop on our cruise with MSC Cruises. We had one day to discover the old port city in the bay of the same name. And even though we never really had Kotor on our bucket list before, we ended up absolutely loving it. Kotor was for us one of the highlights of our cruise through the Adriatic Sea ❤

The bay of Kotor

Early in the morning we entered the Bay of Kotor on our cruise ship MSC Fantasia. The bay, which is about 28 kilometers long and up to 60 meters deep, is bordered by steep mountains almost 1,900 meters high and consists of four separate basins connected by straits. The narrowest part of the bay is only 330 meters wide (Verige Strait). Due to its deep blue waters and impressive mountain scenery, the Bay of Kotor is often called the “southernmost fjord of Europe”.

On our previous trips we could already visit some fjords and were always impressed by the beautiful nature.

❖ Other fjords worth seeing:
The Geirangerfjord in Norway
Glacier Bay in Alaska
The College Fjord in Alaska
Milford Sound in New Zealand

The winding Bay of Kotor is located in the south of Montenegro on the southeastern coast of the Adriatic Sea. Thus, it is located not far from the southern border of Croatia and Bosnia and Herzegovina. Along the coastline, which is about 107 kilometers long, there are several smaller villages with a total population of about 60,000 people. The seaward access to the bay is “guarded” by the – today Croatian – fortress Punta Oštro.

The two inner bays of Risan and Kotor with the landscape ensemble enclosed by the plateaus of Orjen and Lovćen and the cultural-historical monuments of Kotor, Perast and Dobrota have been part of the UNESCO World Cultural and Natural Heritage since 1979.

Things to know about the city of Kotor

Kotor is an old port and trading town at the southeastern end of the bay of the same name. The town itself has only a few thousand inhabitants; together with the surrounding villages, the municipality has a total of about 24,000 inhabitants.

Kotor was severely damaged by an earthquake in 1979, but most of the buildings have been restored. Also this year, Kotor was declared a UNESCO World Cultural and Natural Heritage Site due to its significant cultural-historical monuments and location. The town of Kotor and the bay surrounded by mountains are considered the most famous and most visited tourist region of Montenegro. Not least because cruise ships stop here almost daily, bringing thousands of passengers ashore.

The city of Kotor in Montenegro

The pier of the MSC Fantasia

We docked with our cruise ship in the middle of the bay and were brought ashore from there by tender boats. For the tender boats, we had to pick up (free) tickets at the theater the morning of our shore leave, which were issued for a specific time. This way, everything was a bit more orderly and not all passengers streamed to the exit at the same time. The trip by tender boat to the “Port of Kotor” took about 15 minutes. From here it was only a few minutes walk to the old town of Kotor. Even though Montenegro is not part of the EU, we did not need a passport when entering Montenegro and also when returning to the ship we could simply identify ourselves with the ship’s card at the port authorities.

A map of the historic old town

The old town of Kotor is very compact and thus wonderful to explore on foot and on your own. There is no other way, because no cars are allowed in the old town. We found that totally nice, because so our little daughter could also run carefree through the area and explore everything. 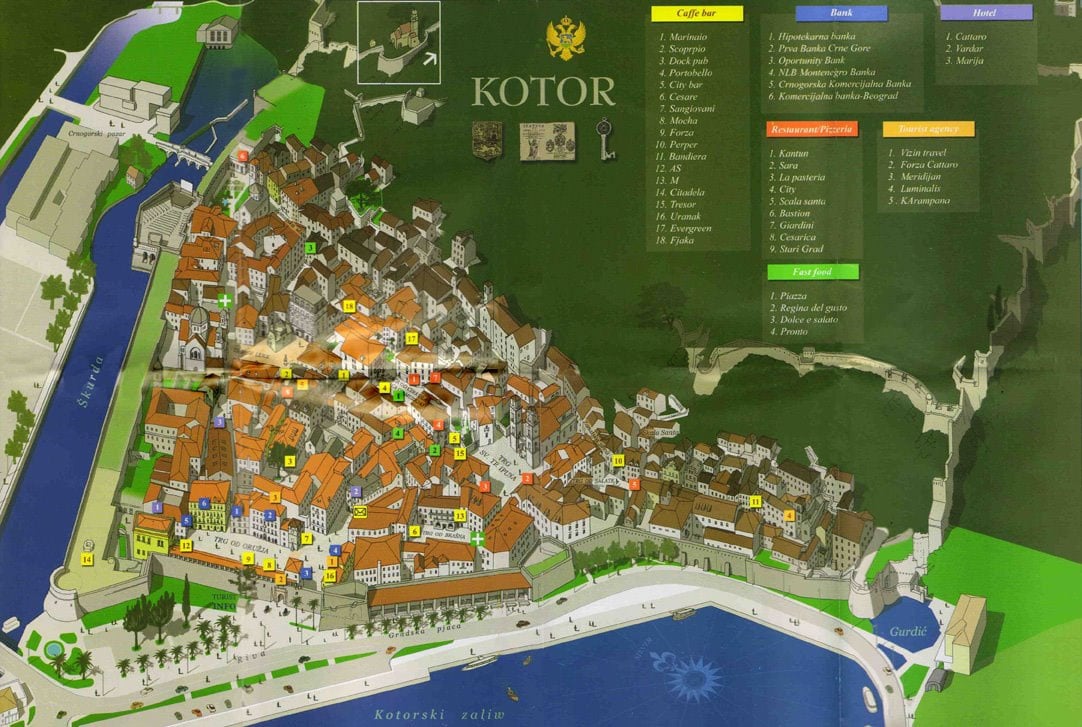 A map of Kotor

The Old Town of Kotor is a medieval, almost triangular part of the city, surrounded by an impressive 4.5 km long city wall. Through a total of three city gates you can access the old town, where there are narrow cobblestone streets and some beautiful squares with churches, cafes and restaurants.

The main gate, dating from the 16th century, today serves as the main access to the old town and is located on its western side overlooking the Bay of Kotor. Just outside the main gate, outside the city walls, there is a small pavilion of the tourist information.

The North Gate is located – as the name suggests – at the northern end of the old town, directly on the river Scurda. It was built in 1540 in the Renaissance style and looks quite small and inconspicuous. From the narrow stone bridge that connects the gate with the other side of the river, you have a great view of the defenses and the city walls.

The South Gate, built in the 9th century, is the oldest city gate of Kotor. Leaving the old town through the gate and looking back at the fortifications, one discovers the associated Gurdić bastion, built in the 15th century. By the way, this is also walkable on a small piece.

The alleys, squares & buildings of the historic old town

We walked through the main gate into the old town and ended up right in the main square of the city. The most prominent building here is the three-story Renaissance clock tower from 1602, around which many restaurants and cafes are located. With an ice cream in hand, we walked for 1 to 2 hours through the picturesque, winding streets of the old town. In the city today there are still some palaces built under Venetian rule in the 15th-18th centuries. We could have made a photo stop at every corner 🙂

While strolling through the city we noticed numerous cats. And indeed, the city is also known for its many street cats. There is even a cat museum dedicated to them here and many stores sell postcards and souvenirs with cat motifs.

During our tour of the old town, we noticed many beautiful churches and cathedrals, of which Saint Tryphon Cathedral is the most beautiful and largest. The Romanesque Catholic Cathedral, built in the 12th century, is one of the most important sights of Kotor and is considered the landmark of the city. It is located directly on a beautifully landscaped square, from which you have a good view of the church. In the cathedral there are valuable art collections and many relics and frescoes of gold and silver.

In the midst of the old town, we were able to discover other churches, such as the small St. Luke’s Church, which stands prominently directly on a square. Like the great Saint Tryphon Cathedral, it was built in the 12th century in the Romanesque style. In the immediate vicinity is the much larger St. Nicholas Church, which was built and completed much later – in 1909. It is famous for its extensive collection of icons.

If you walk from outside the city walls through the north gate into the old town of Kotor, your gaze falls directly on the church of St. Mary Collegiate with its high steeple. The Catholic church was built in 1221 on the site of a 6th-century basilica and features impressive bronze doors with 20th-century bas-reliefs, among other things.

The fortification of Kotor & the fortress Sveti Ivan

Kotor is surrounded by a total of 4.5 km long city wall: The fortifications, up to 15 meters wide and 20 meters high, encircle the entire old town and then extend to a height of 260 meters on San Giovanni Mountain, where the Sveti Ivan fortress is located. The defensive complex was built from the 9th to the 15th century and originally served to protect the city from invaders. 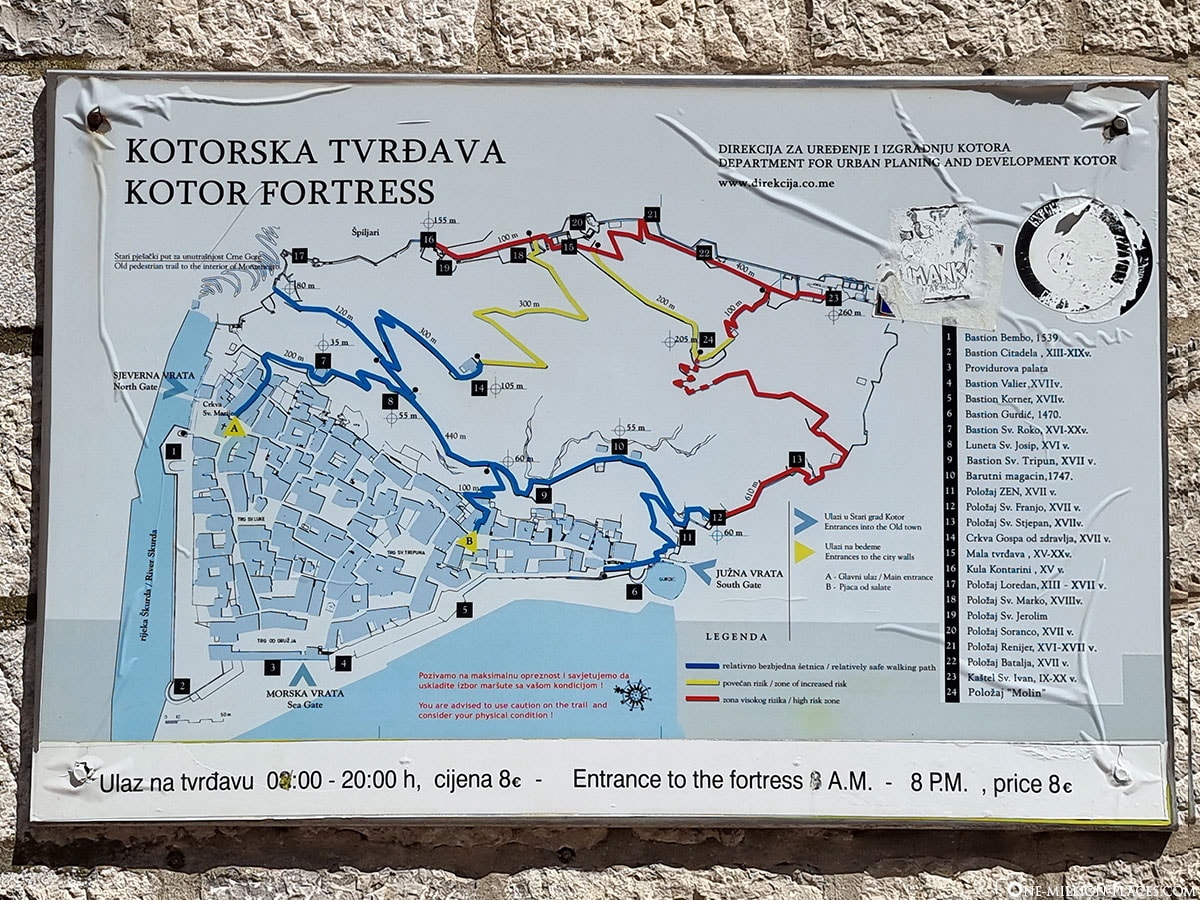 The fortification of the city of Kotor

The main entrance to climb the fortifications is behind the Church of St. Mary Collegiate at the end of the alley (location in Google Maps). And from there it goes directly steeply uphill. After a few meters you pass a small ticket booth where you pay 8 EUR entrance fee per person. The official opening hours are from 8 am to 8 pm. We have read that you can save the entrance fee if you arrive before 8 o’clock, but we suspect that the gates at the ticket booth are locked and you just can’t get in. Another access to the city wall is near the “Pjaca od Salate”.

We left about 11 o’clock to climb the mountain. Earlier is always better, of course, because it’s not so hot then. But due to the tender boat traffic from the ship to the city, we couldn’t be there that much earlier. Of course, we were then in the complete oppressive midday heat on the road, but have always sought shady places for a breather. Since the views were always gigantic anyway, this was not quite so bad, because so we could take enough photos 😉

Church of Our Lady of Remedy

We had a small milestone at the church of Our Lady of Remedy reached, which is located in the middle of the mountain and along the city wall. Here we could first take an extensive break, because all the time uphill to carry our little daughter was not so easy. From here we had a really great view of the bay for the first time and could even spot our cruise ship in the distance. But also the church itself is a great photo motif: For this you just have to walk up a few more meters and steps, so that you then see the bay in the background and the church in the foreground. Simply great! ❤

Ascent to the fortress

From the church it went really steeply upwards. This was really a small challenge in the sweltering midday heat, but we still managed it well – with lots of breaks, plenty of water and a portion of motivation! And then at some point we had made it: we climbed a total of 1,350 stairs – with a small sleeping child in our arms. Crazy 🙂 We were totally happy when we arrived at the top.

At the very top of San Giovanni Mountain, 260 meters above the sea, is the fortress of Sveti Ivan, from which there is a magnificent view of Kotor, the Bay of Kotor and the majestic mountain range. Simply breathtaking! We let the panorama work on us for quite a while and then explored the ruins of the fortress a bit. It’s kind of unbelievable how this fortress was once built here on the steep mountain slopes – and that with the rather modest technical aids of the time.

Climbing the fortifications of Kotor was our absolute highlight in the city. Even though the climb was very strenuous, it was worth the effort because the views were simply fantastic.

So that you are also well prepared for the hike, here are a few tips from us: Take enough water with you (at least 2 liters per person), wear comfortable and safe shoes (preferably no flip flops, because the stones can also sometimes be slippery), do not forget the sunscreen and a hat, start best early in the morning or late in the afternoon and take enough souvenir photos 🙂