Today the alarm clock rang again early, as our flight from Maui to Big Island with Hawaiian Airlines started already at 8.30 a.m. Big Island is the 4th Hawaiian Isel on our world tourafter Oahu, Kauai and Maui.

Our flight from Kahului to Hilo

The flight with Hawaiian Airlines was on time and only takes about 30 minutes. At the airport in Hilo we picked up our little rental car first. As always, we have booked this with all insurances via billiger-mietwagen.de.

As a tip: a good overview and description on which side of the plane you should sit on the flights between the islands of Hawaii, you can find here. 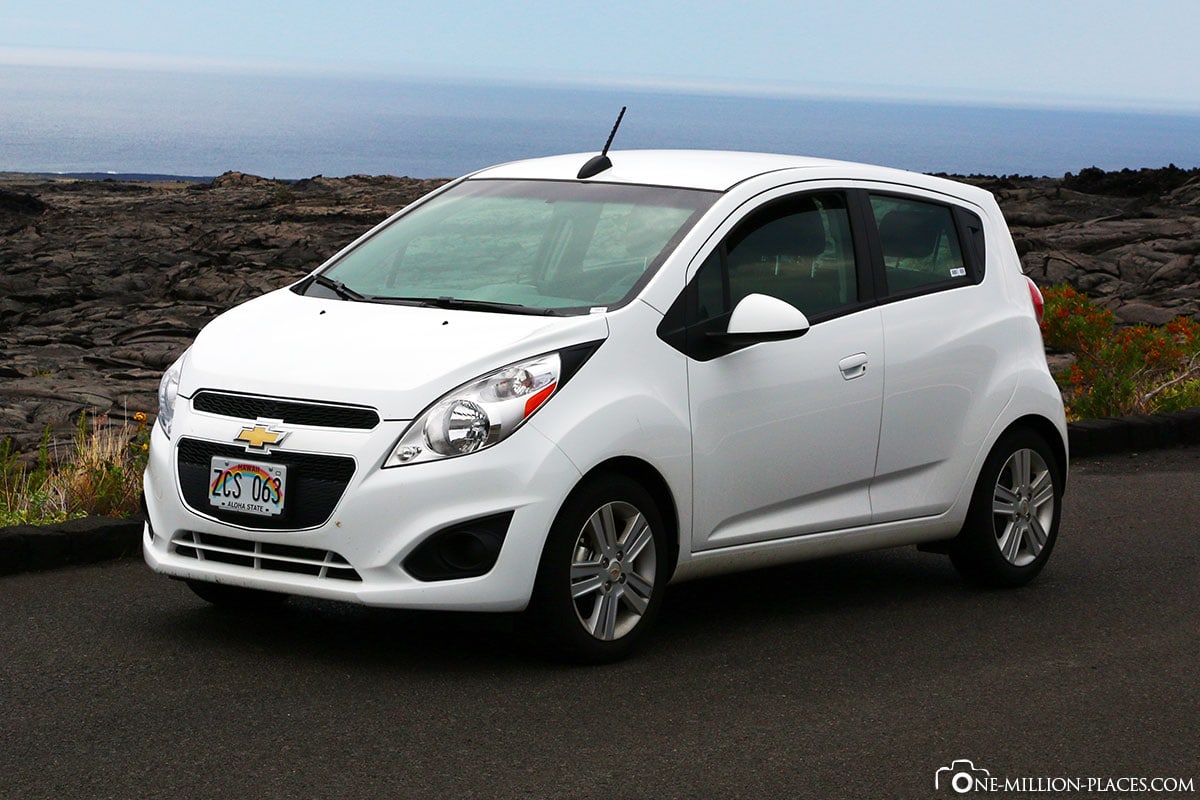 Our hotel in Hilo

Since it all went quite fast, we were already at our accommodation Aarons Cottage at 10.30 am and had some time until our today’s Volcano tour started.

The cottage consists of only three rooms. We arrived at noon and were able to check in, which was great. The hostess is very nice and gives you tips for the surroundings. The room is very clean and nicely decorated – there was nothing missing. There is a shared kitchen, which is well equipped. In the morning from 7 a.m. there is breakfast – but you can also have breakfast later. Here, too, you can see how much effort the hostess puts into it: homemade cakes, various types of bread, fresh fruit, etc. Really great! Behind the rooms is a large garden. There are seating and a weaver’s grill, which you can also use. Free parking is available directly on site. WIFI worked very well. We highly recommend Aarons Cottage! 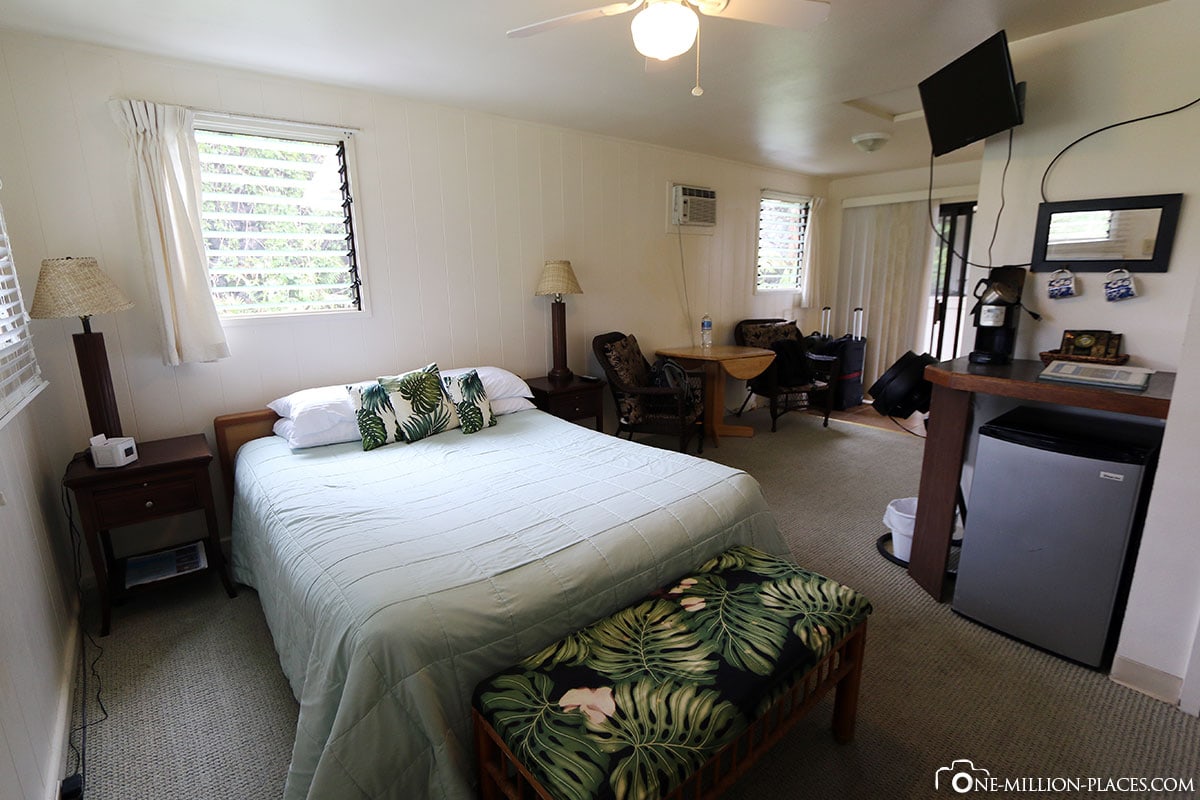 Our room at Aarons Cottage

Things to know about Big Island

Big Island, originally called Hawaii, is the youngest and largest island in the Hawaiian chain. The nickname “Big Island” comes on the one hand because the island is almost twice the size of all other Hawaiian islands combined. On the other hand, this avoids the fact that the island is not confused with the entire island chain. Big Island consists of five large volcanoes, of which Kilauea is the most active volcano in the world. Since 1983, it has been continuously spewing lava. At the highest mountain in the world, everyone always thinks of Mount Everest. The base of the sleeping volcano Mauna Kea reaches to a depth of 5,500 meters. Together with its summit, which is located at an altitude of 4,205 meters, the Mauna Kea has a total height of over 9,700 meters.

On Big Island, you can cross four different climate zones around the world – from the wet tropics to the cold steppe. The power of nature can be felt on Every corner of Big Island – be it the active volcanoes with flowing lava in Hawaii Volcanoes National Park, the snow-capped heights of Mauna Kea, the lush valleys of the Hamakua coast or the deep black sandy beaches of Punaluu. There is much to see, discover and experience here. Due to the size of the island, one should not underestimate the distances and bring enough time. Ka Lae (South Point) is the southernmost headland of Big Island. It is also the southernmost point of the 50 states of the United States of America.

The start of our volcano tour

A few weeks ago we had booked a tour to explore Big Island through Mauka Makai Adventures. At 1 p.m. we were picked up by our guide Josh and surprisingly found out that we are only two on the tour. A private tour – perfectly 🙂

The Rainbow Falls in Hilo

Our first stop was the Rainbow Falls in Hilo. In addition to the beautiful waterfall, we found the trees here really interesting.

Then we went on to Hawaii Volcanoes National Park, which is about 30 miles from Hilo. It was founded in 1916 and is a UNESCO World Heritage Site. In addition to extensive lava fields and craters, the area includes the active volcano Kilauea. The current eruption of Kilauea has been ongoing since January 1983. The lava flows flowed into the Pacific until mid-2014 and it was actually a wish of us to see this live. Here’s a photo of how impressive it can be.

Since June 2014, however, the lava flow has changed direction and now flows northeast to the village of Péhoa and is about to cross Highway 130. Unfortunately, the whole area is not open to the public for safety reasons, so there is currently no possibility to see flowing lava. So i think we’ll have to come back at some point.

Update July 2016: For the first time in 2 years, the lava is now flowing back into the sea on the coast of Big Island!

A hike in the crater of Kilauea Iki

Our first stop in the national park was the Kilauea Iki Crater, on which we had a great view from a parking lot. We descended on a hiking trail into the interior of the crater and walked over the still steaming surface of a cooling lava lake from the eruption in 1959.

The next stop was the 550-year-old Thurston Lava Tunnel, which can be explored via an 800m circular trail.

A hike over the lava fields of Mauna Ulu

Afterwards we drove past Hiiaka and Pauahi Crater to the Mauna Ulu car park. From here, a 4 km long hiking trail starts to the crater rim of the Mauna Ulu volcano, which leads over the lava flows of 1973 and 1974. The path went to a lookout point, which is located on a 65 m high slag cone. From up there you can actually look in Kilauea’s eastern fault zone. Unfortunately, however, it was very foggy. On the way you can see many different lava formations. A formation is called “Kitty Cat” – and in fact, it bears a resemblance to a seated cat 🙂

The glow of Halema’uma’u Crater

The last stop was the highlight of our tour: after dark we drove to the Kilauea viewpoint. From up there you can admire the glow of Halema’uma’u Crater. We spent about 45 minutes here, because the strength of the vapours changed the intensity of the glow – sometimes it was stronger, sometimes a little weaker. It is hard to imagine hot lava bubbling there at a depth of 60 to 150 metres.

Around 9 p.m. we were back in our accommodation. It was a really great and impressive day!