Having already explored the two Canary Islands of Tenerife and Gran Canaria, we were now looking forward to a week on the island of La Palma. La Palma is the geologically youngest island of the Canary Islands and is 40% covered with forest. This makes it the most densely wooded in comparison to the other Canary Islands and it is often called Isla Verde (“Green Island”). Among the most famous sights are the volcanoes on La Palma, the national park Caldera de Taburiente, the Roque de los Muchachos, the smuggler’s bay Poris de Candelaria and of course the capital Santa Cruz de La Plama.

For our week on La Palma, we opted for a package deal from Weg.de. From Frankfurt we took a direct flight with Condor to La Palma and back with Lufthansa. On the outbound flight, we had an upgrade to Business Class with Condor. a free seat in the middle row, which of course made the flight with our little mouse very pleasant.

For our rental car we first looked at the offers on billiger-mietwagen.de, because we have always had very good experiences here so far. Unfortunately, however, there was no suitable offer for our time, so we decided to use the local provider CICAR. For a 5-door Peugot 208, incl. Automatic and all kilometers, comprehensive insurance without deductible, additional driver and child seat we paid a total of 180 EUR for 6 days. The car was brought directly to our hotel free of charge and we were able to return it to the airport at the end. Overall, we can really recommend CICAR.

The Hotel H10 Taburiente Playa is located on the east coast of La Palma directly on the sea, only about 5 minutes by car from the airport or the main city of Santa Cruz. With its approximately 400 rooms and suites, it is certainly one of the largest hotels on the island.

Hotel H10 Taburiente Playa has 3 large and really nice outdoor pools, a children’s pool, several bars, a tennis court and free parking. Los Carcajos beach is about 300 meters away. We stayed in a 56m² duplex suite with 2 bedrooms and separate living room, which we liked very much. We had a half-board catering, which was completely sufficient, because we were always on the road during the day anyway and also in the immediate vicinity are many shopping opportunities (such as Lidl or Spar).

With a north-south extension of 45 kilometers and a west-east extension of 27 kilometers, the island of La Palma is the third smallest island of the Canary Islands after El Hierro and La Gomera – and yet you will find many beautiful sights here that you can easily explore in a week. For this it is recommended in any case to rent a car.

Santa Cruz de La Palma is the picturesque capital of the island of the same name La Palma, where about 16,000 inhabitants live. It is located on the eastern side of the island and is bordered by forested mountain slopes on one side and the Atlantic Ocean on the other. The old town boasts cobblestone streets, a Renaissance town hall, several old Canary and colonial-style houses with ornate wooden balconies, a long city beach, a small zoo, and an international cruise port. The best way to explore Santa Cruz de La Palma is with a leisurely stroll.

You can find our detailed blog post about the capital Santa Cruz de La Palma here.

The Caldera de Taburiente National Park is located in the center of La Palma and is one of the most important sights of the island with its crater-like depression open to the west. With a diameter of about 9 kilometers and a circumference of almost 30 kilometers, the Caldera de Taburiente is considered one of the largest craters in the world. Thanks to the fascinating landscape and its scientific importance, the area was declared a national park in 1954. Here visitors can expect countless rock formations, vast pine forests, deep & narrow gorges as well as picturesque streams, springs and waterfalls.

You can find our detailed blog post about the Caldera de Taburiente National Park here.

The Roque de los Muchachos is the highest elevation of the island with a height of 2,426 meters. The mountain belongs to the Parque Nacional de la Caldera de Taburiente and forms the northwestern edge of the caldera. You can drive by car directly to a parking lot located a few meters from the viewpoints. First, you pass a group of smaller rock pillars that have given the peak its name – translated into German, “Roque de los Muchachos” means “Rock of the Boys or Younglings”. All along the way, breathtaking views of the surrounding area and cloud cover opened up to us on all sides. On a clear day you can even see the neighboring islands of El Hierro, Tenerife and La Gomera. We definitely saw the Teide, Tenerife’s highest mountain, with its 3,715 meters height, flashing through the cloud cover.

You can find our detailed blog post about Roque de los Muchachos here.

Cloud waterfall over the Cumbre Nueva

Another sight to admire on the island of La Palma is the Cloud Waterfall over the Cumbre Nueva. At an altitude of 1,450 meters, trade wind clouds coming from the east roll over the ridge and dissipate on the west side. An insanely interesting natural spectacle!

That La Palma is an island of volcanic origin can be seen at every point when driving over the island. The south of La Palma contrasts scenically with the green, wooded north of the island. Due to the two volcanoes San Antonio and Teneguía, in the south you will find an extraordinary landscape of black solidified lava and a rather sparse vegetation. Here you can find, among others, the volcanoes San Antonio and Teneguía.

San Antonio Volcano has a small visitor center that houses an exhibit with exhibits and information about the 1677 volcanic eruption and the formation of the volcano. From the visitor center, a hiking trail leads along the crater rim. From up here you have a great view into the about 150 meters deep, round crater of the volcano, which lies at an altitude of 632 meters above sea level. NN. lies. At its base, it has an outer diameter of about 1 kilometer.

The volcano Teneguía is a 428 meters high cinder cone, which was formed in 1971. It forms the southern end of the volcanic chain that crosses La Palma from the Caldera de Taburiente to the south.

Our detailed blog post about the volcanoes & the south of the island can be found here.

If you are looking for a beautiful waterfall on La Palma, you should definitely check out the Los Tilos waterfall in the northeast of the island (location in Google Maps). The waterfall, which is about 22 high, is located in a loorbeer forest and can be reached quite easily by rental car. There are several free parking facilities, a small visitor center with public restrooms, and a small restaurant. Depending on which parking lot you are in, you will walk about 5 to 15 minutes to the waterfall. The trail leads directly from the road along a water channel and small tunnel directly to Los Tilos. By the way, the entrance and parking are free of charge.

You can find a very detailed blog post about Los Tilos waterfall here.

Lighthouse & the Salt Flats of Fuencaliente

Directly on the south coast of La Palma we discovered two lighthouses. The smaller, older tower has not been in operation since 1985. In return, the new red and white striped lighthouse was put into operation in the same year. From the lighthouse, a small path leads directly to the salt flats of La Palma, which can be visited free of charge. Due to the sun, the seawater condenses and the salt remains. The extraction of the salt is then done in the traditional way by hand. We really liked the contrast between the white salt, the black lava rock and the blue sea.

Our detailed blog post about the lighthouse & salt flats of Fuencaliente can be found here.

Breakwaters in the port of Tazacorte

If you’re looking for famous Instagram & photo spots on the island of La Palma, you’ll inevitably end up at the massive breakwaters in the small coastal town of Tazacorte, which is also the sunniest place on the island with 3,500 hours of sunshine a year. Since the waves of the Atlantic Ocean can reach several meters high, especially in winter on the west coast, two huge breakwaters (piers) made of concrete were built to protect the marina and the beach. The first breakwater is 176 meters long, the larger one even 400 meters.

You can find our detailed blog post about the breakwaters in the port of Tazacorte here.

A special highlight and another great photo motif on the west coast of La Palma is the smuggler’s bay Poris de Candelaria. The Pirate Bay is located near the Cueva Bonita near Tijarafe and was used in the past – when there were no roads on La Palma – by the locals as a small port for goods of all kinds. The well-protected bay is hidden under a huge rock overhang about 50 meters high on the steep coast of the island. In the bay, besides the turquoise waters, you will find mainly about 20 small white stone houses, either cut directly into the rock or somehow built in between. Pirate Bay is today mainly a tourist destination and the cottages are inhabited mainly on weekends by local fishermen, who then also sell their wares here.

You can find our detailed blog post about the smuggler’s cove Poris de Candelaria here.

The North of the island

A trip to the north of the island of La Palma is also worthwhile in any case. Besides the green vegetation and laurel forests, it is usually much quieter than other places on the island. One of these places is, for example, the “El Cubo de La Galga”.

The Cubo de la Galga is a laurel forest, also known as Laurisilva, located at an altitude between 500 and 1,000 meters above sea level. Due to the constant precipitation of fog in combination with the winds of the Atlantic Ocean, a unique flora and fauna developed here over time, which today can only be found on Tenerife, La Gomera, El Hierro and Gran Canaria. In the Cubo de la Galga there are about 20 different species of trees that can grow up to 30 meters high. In addition, there are many species of shrubs, which are often complemented by mosses and ferns. Unfortunately, it was raining heavily during our visit and it was also quite late, so we only checked out the first part of the trail through the jungle-like laurel forest.

In the north of La Palma you can also find the natural swimming pools La Fajana and Charco Azul. Here, protected from the waves of the Old Atlantic, you can swim carefree and safe. Unfortunately, the weather wasn’t quite as nice when we visited, so the natural pools didn’t glow beautifully in their colors as they usually do.

From the Charco Azul natural swimming pool, a beautifully landscaped coastal path leads to the small town of San Andrés with its Renaissance-style church of Nuestra Señora de Montserrat.

On the following map at Google MyMaps we have marked all known sights and photo spots. If there is an important point missing, feel free to send us a message on Instagram or by mail and we will be happy to add it. 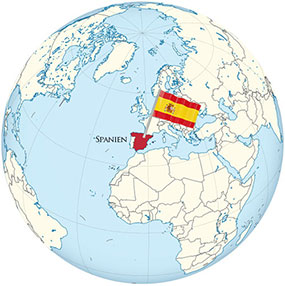