It takes just over 4 hours to get from Los Angeles to the gambling metropolis and casinos of Las Vegas by car. On the route of Interstate 15, one drives through the Southern California desert, which is characterized by various rock formations, sand dunes and encrusted salt lakes.

Our Arrival in Las Vegas

About 70 kilometers before Las Vegas you pass the state border between California and Nevada – you notice this among other things, that suddenly the first major game casions can be seen on the roadside. Here you can also find the fashion outlets – a stop is definitely worth it (Google Maps). The closer you can see from afar you can see the skyline of the Entertainment Capital of the World, as Las Vegas is also often called. At the entrance to the village you can also find the world-famous sign. 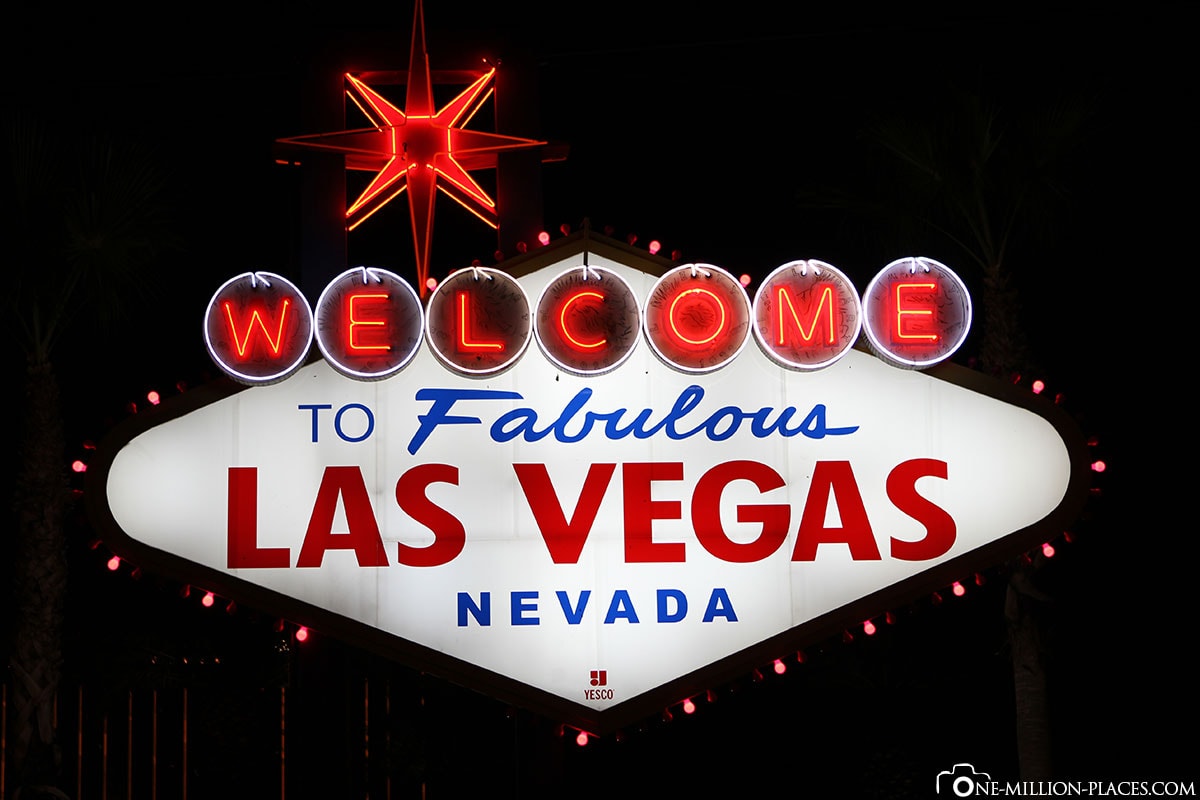 Our Hotel The Cosmopolitan

Our hotel The Cosmopolitan was located right on the famous Las Vegas Strip. After we had parked our car in the free hotel garage, we were able to check in immediately and move into our room. We would almost call it a suite, because there was a living room with a small kitchen, a dressing room and a large bathroom and bedroom with a breathtaking view of the Bellagio Fountains and the Strip. We stood on the balcony for a while to take a close look at everything. Really great!

The casinos on the Las Vegas Strip

The Las Vegas Strip is an amusement street with dozens of casinos, show theatres, bars, restaurants and some of the most impressive hotels in the world. Many of the hotels are adventure hotels whose exterior and interior design follow a central theme: be it the “Hotel Paris” with its Copy of the Eiffel Tower, the “Bellagio” with its large water fountains dancing to the music, the “Caesars Palace” in ancient Roman design, the pyramid hotel “Luxor” in front of which a sphinx watches, the “Venetian” reminiscent of Venice or the “Mirage” with its eruption. There is something to look at, discover and marvel at every few meters.

Of course, we couldn’t resist trying one or the other casino and trying our luck. Be it roulette or the one-armed bandits. The casinos are colorful & huge, always filled with people and of course open 24/7.

Also worth seeing is the “old” part of the city, i.e. the casino landscape on Fremont Street in Downtown. It was here that the city’s first casinos, such as the Golden Gate and the Golden Nugget, were built here at the beginning of the 20th century. To attract more tourists from the Strip to Downtown, the so-called Fremont Street Experience opened in the 1990s, a vaulted dome that shows on an LED scoreboard.

The most famous landmark of Las Vegas, however, is probably the “Welcome To Fabulous Las Vegas” sign, which stands on the median strip of Las Vegas Boulevard and in front of which always long tourist queues form.

The Starbucks Cup of Las Vegas

Las Vegas, of course, has several Starbucks stores and also its own cup 🙂