The Harz is characterized by dense deciduous, mixed and coniferous forests, steep mountain ranges, deep valleys, wild rivers, gentle mountain meadows, bogs, mountain streams and impressive rock formations. A variety of landscapes that enables unique nature experiences and excursions. We took a closer look at two of the most beautiful rock formations in the Harz – the Devil’s Wall and the Klusberge near Halberstadt.

Things to know about the Devil’s Wall

In the middle of green plains, meadows and fields rises – as if out of nowhere – the Devil’s Wall in the northern Harz foreland, a rock formation made of hard sandstones of the upper chalk, partly spectacular. It runs for about 20 km from Ballenstedt in the southeast via Rieder and Weddersleben to Blankenburg in the northwest. On this route, it comes to light in three places.

In order to honour this special place and prevent the sandstone from being dismantled, it was already protected by the district council in the 19th century. Since 1935, the rock formations near Weddersleben have been designated as a nature reserve “Teufelsmauer and Bode northeast Thale”. This makes it one of the oldest nature reserves in Germany.

In 2009, the Teufelsmauerstieg was opened – a 35 km long hiking trail that leads from Ballenstedt to Blankenburg along all visible rock elevations of the Devil’s Wall. These include the “Counterstones” near Ballenstedt, the “Königstein”, the “Papensteine” and the “Middle Stones” near Weddersleben, the “Hamburger Coat of Arms” near Timmenrode and the “Grandfather” near Blankenburg. However, the rock formations are not only popular with tourists and hikers, but also in the film industry. The Devil’s Wall has already been used as a backdrop in films such as The Pope, The Medicus or Bibi & Tina.

The Legend of the Devil’s Wall 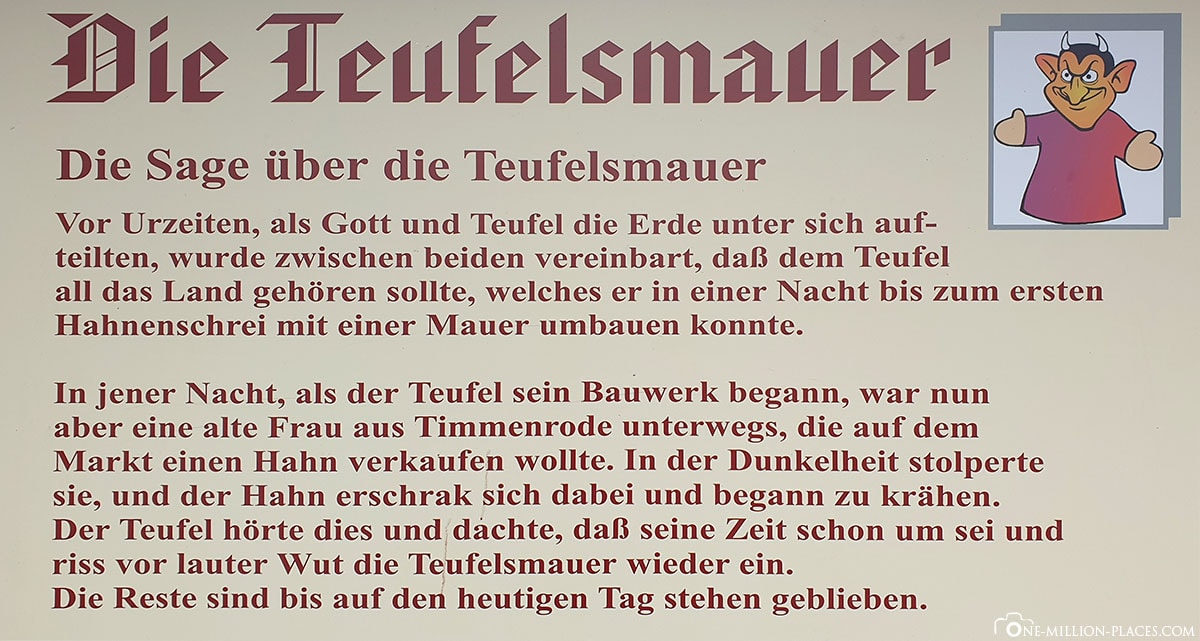 The Legend of the Devil’s Wall

The “Hamburger Coat of Arms” at Timmenrode

At Timmenrode there is a particularly striking single rock of the Devil’s Wall to admire: the “Hamburger Coat of Arms”. In order to reach this rock formation in the best possible way, it is best to use the free parking lot at the sports field in Timmenrode (corner Gehrenstraße/Lindestraße). From here it is a 15-minute easy walk to the Devil’s Wall.

The name of the rock formation “Hamburger Wappen” comes from this, because the three steeply towering rock needles are very similar to the coat of arms of the Hanseatic city of Hamburg with its three towers. We spent quite a while on the rocks to look at them from different perspectives and to photograph them.

The best starting point to explore the section of the rock formations at Weddersleben is a parking lot on the Alte Quedlinburger Straße near Weddersleben. From here you simply follow the sign “Devil’s Wall Rise”, runs along the Bode through a small section of forest until a stairway leads up to the Devil’s Wall.

Here, the part of the Königstein stretches over 500 m, which is considered the most impressive and popular part of the Devil’s Wall due to its steep sandstones protruding into the sky. Particularly striking is the Adlerfelsen, which with a height of 185 m above sea level is the highest point of the Königstein. A little further on, the so-called “middle stones” and “pap stones” line up, which can be easily reached via a hiking trail.

This section of the Devil’s Wall was best enjoyed by us due to the impressive rock formations. In addition, there was relatively little going on here, so we could look around in peace and take pictures.

In order to explore the two free-standing rock formations “Gegensteine” near Ballenstedt, it is best to park your car directly on the free parking lot behind the “Little Counterstones” (address: An den Gegensteinen 1, 06493 Ballenstedt). From here it is only a few meters on foot until you reach the “Little CounterStone”. If you follow the small hiking trail, you will reach the “Großer Gegenstein” 450 m away, 450 m away. You can climb it with the help of steps beaten into the rock and is rewarded at the summit cross with a wide view into the surroundings.