On our way to the Moselle we made a stopover for several hours in the spa town of Bad Kreuznach. We parked our car at the guest’s house, where the tourist information office is located. From here we were able to explore the main sights of Bad Kreuznach on foot.

Things to know about Bad Kreuznach

The history of Bad Kreuznach began 300 years before Christ with the establishment of a Celtic village on the banks of the Nahe. Today Bad Kreuznach is a town with about 51,000 inhabitants and lies in the romantic Nahetal in the state of Rhineland-Palatinate. As the oldest radon-sole bath in the world, Bad Kreuznach developed into a renowned spa town with elegant villas and green spaces at the beginning of the 20th century.

A walk along Via Historica

In the best summer weather, we explored Bad Kreuznach within 2 hours on foot along the 5.5 km long Via Historica, a cultural-historical city tour. The walk took us from the tourist information via the city centre, the old town and the castle park via the panorama path at Kauzenberg back to the spa centre. 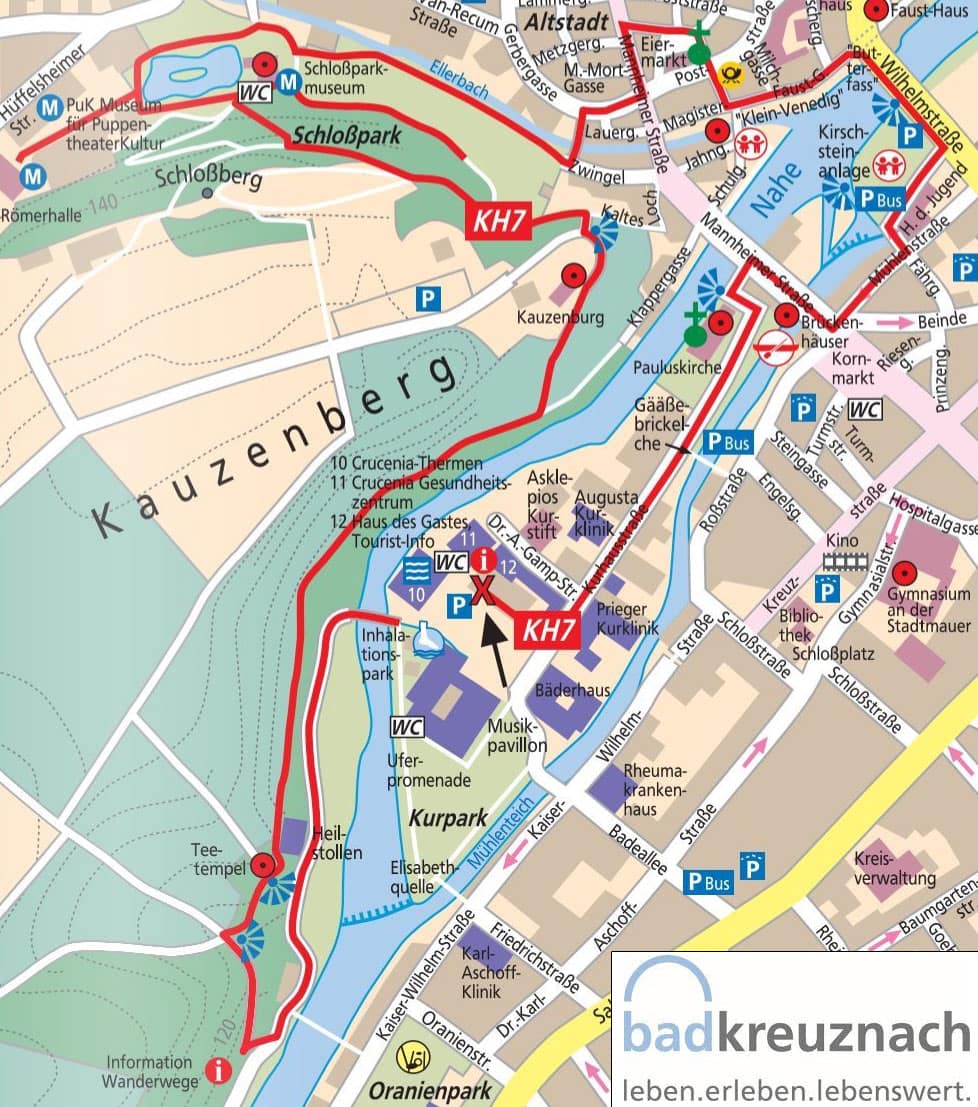 The hiking trail “Via Historica” through Bad Kreuznach

The bridge houses on the Old Nahe Bridge

Our first port of call was the Old Nahe Bridge with the historic bridge houses,which is the landmark of the spa town. It was built as a stone bridge around 1300 and bridges the Nahe river and the Mill Pond, a side arm of the Nahe, on eight pillars. The bridge used to be part of the city wall ring and the intersection of two highways. Originally it was not allowed to be built, but because it eventually became too narrow within the city wall, eager citizens built the wooden-framed bridge houses on the pillars of the bridge between 1480 and 1600. By the way, only the right part of the bridge has been preserved in the original. The left part was destroyed in the Second World War and later replaced by a new building.

Photo tip: The best way to photograph the bridge with the bridge houses from the banks of the Rossstraße or the Geißen Bridge, which is only a few steps away from St. Paul’s Church, is a photograph. 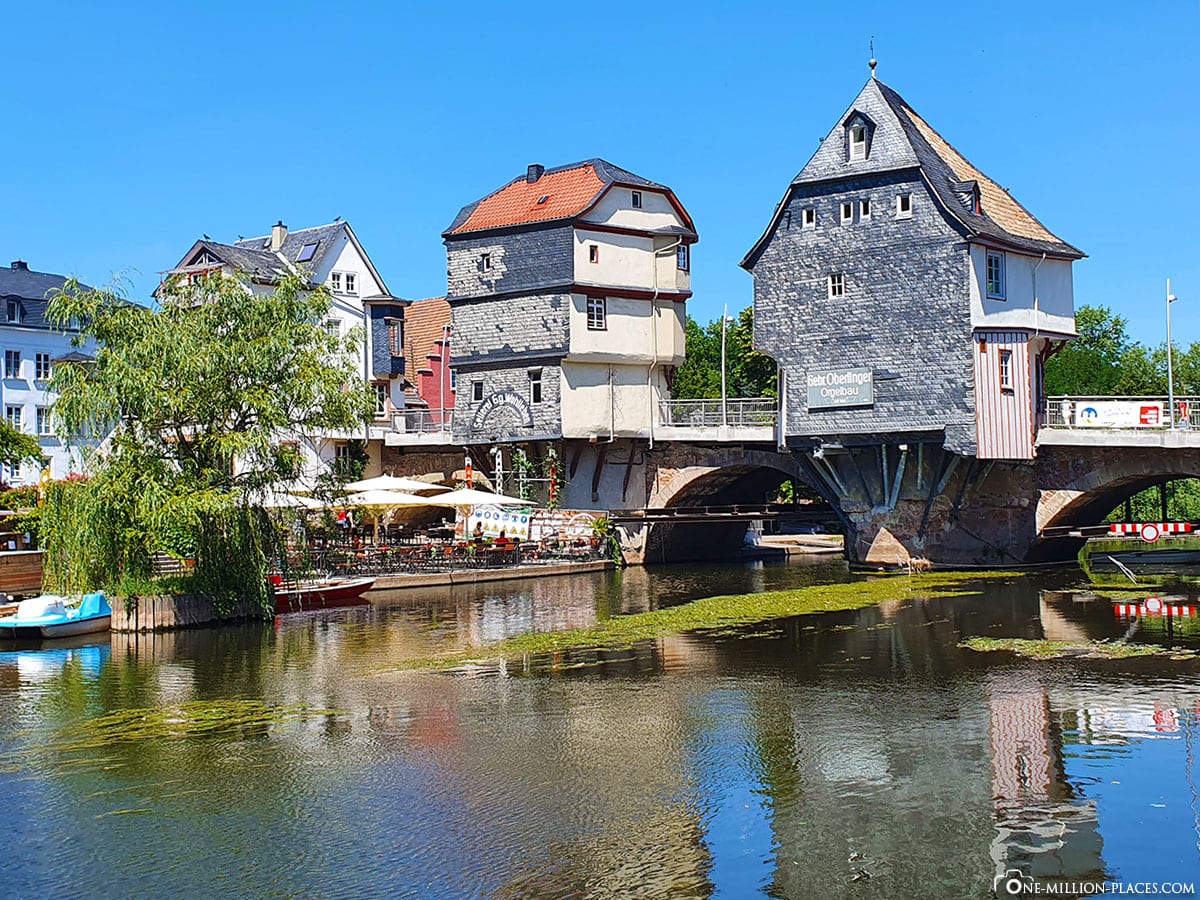 The bridge houses on the Old Nahe Bridge

Just a few metres from the Old Nahe Bridge, the Kornmarkt is the central urban market square, where a traditional market for fresh produce and regional food takes place twice a week. In the middle of the square is the Kornmarktbrunnen, which was completed in 1975. It is considered a “monument of the little people” and depicts unforgettable people from the history of the city. On the edge of the square, many restaurants and cafés have set up their tables and chairs and invite you to linger.

A third body of water flows through Bad Kreuznach next to the Nahe and the Mühlenteich: the Ellerbach, which flows through the historic Neustadt. From the Ellerbach Bridge you have a beautiful view of the rows of houses, which were built on this point on the medieval city walls and crowd with their buildings close to the canal. The Bad Kreuznachers christened this district “Little Venice” because of the picturesque development. Unfortunately, the Ellerbach had total low water during our visit, so we did not find the sight of “Little Venice” so picturesque.

Since the Middle Ages, the district between Nahe, Hochstraße, Schloßpark and Wilhelmstraße has been referred to as Neustadt. Actually somewhat curious that an old town is called “New Town”; however, this is historically justified. The heart of the historic New Town is the Eiermarkt, which used to be the central market place. Characteristic of the district are the many narrow streets and winding streets, in which today the oldest houses of the city are located. Worth seeing is the 13th-century St. Nicholas Church, which used to be part of a Carmelite monastery.

Over the “Zwingel”, part of the old fortifications, we walked from the historic New Town through a city wall gate into the castle park. It passed the Castle Park Museum and up to the Kauzenberg to Kauzenburg. Below the castle we followed the panoramic path that leads above the roofs of the city. From here we had a fantastic view of small wine slopes, the near, the city center and the surrounding area.

One of the main reasons for our stopover in Bad Kreuznach was the Salinental. Here are six graduation plants over a kilometre long, water wheels, engine ditches and other facilities, which together form Europe’s largest open-air inhalation and make the Salinental health park a kind of open-air museum in the history of salt works. In the Nahe Valley, salt was extracted 400 years ago due to the numerous salt springs. Today, the salty water is extracted from a 500-metre-deep spring in the Salinental. It “supplies” the graduation works, the open-air inhalation in the spa park, the thermal bath and a health centre.

A walk along the saline valley is a boon for the body: due to the pouring salt water at the graduation works, the air is just as refreshingly salty as it is on the sea and has a beneficial effect on the airways, bronchi and skin.