“Where Bavaria is only one step away from Swabia” – with this slogan the two-country city of Ulm/Neu-Ulm advertises itself. As a medium-sized city, Ulm, together with its young sister town Of Neu-Ulm on the Bavarian side of the Danube, is an attractive destination and a double city of superlatives: here stands the highest church tower in the world, the most crooked hotel in the world and one of the largest preserved fortifications in Germany.

Things to know about Ulm and Neu-Ulm

The university town of Ulm is located on the southeastern edge of the Swabian Alb on the border with Bavaria and has more than 125,000 inhabitants. The former Royal Palatinate and The Free Imperial City of Ulm was first mentioned in 854. From 1802 it belonged to Bavaria, from 1810 to Baden-Württemberg. Since then, Ulm has also been separated from its former urban area to the right of the Danube. This remained with Bavaria and it developed on this the city of Neu-Ulm, in which today live about 60,000 inhabitants. 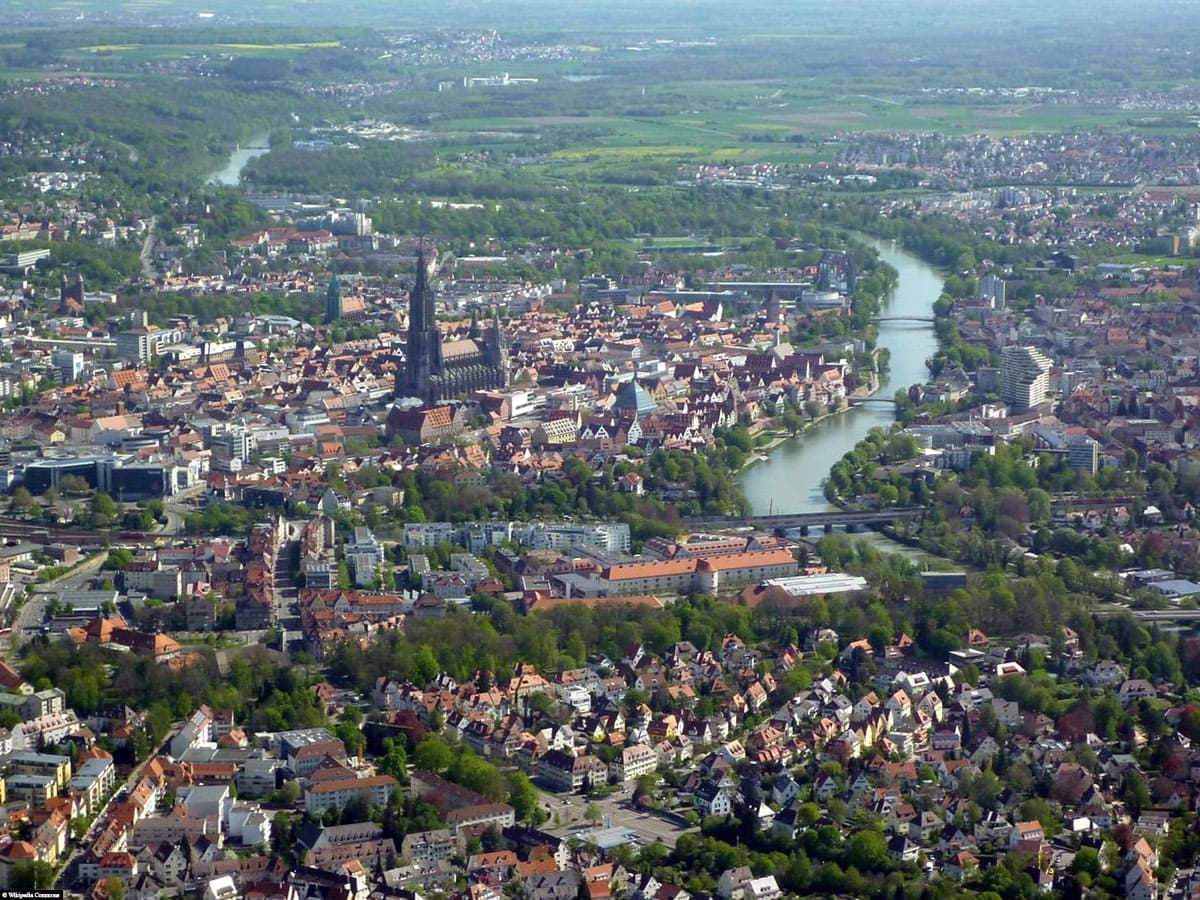 The two-country town of Ulm/Neu-Ulm on the Danube

What to see in Ulm?

In Ulm we searched for a central parking lot in the Fischerviertel and from there we explored the city on foot and on our own. In the end, a few kilometers came together, but we think that your own feet are still the best way to explore a city 🙂

We really liked the Fisherman’s quarter: winding alleys, old half-timbered houses, dripping mill wheels, quaint restaurants and in the middle of it the river Blau, which winds through the district and creates a special ambience.

In the 19th century, the Fisherman’s Quarter was still a quarter of the shipmen, tanners and Danube fishermen, whose houses were living and working places in one. When the traditional crafts disappeared, small businessmen tried in vain to earn a lot of money. The condition of many buildings deteriorated; some were even on the verge of decay. Due to a lack of commercial pressure, the fishing district was spared demolitionuntil of the 1970s, when many historic buildings were saved and renovated by a private person; many others followed his example. Gradually, the image of the neighborhood changed to its present appearance.

Particularly impressive is the “Schiefe Haus” from 1443, which is located on the banks of the river Blau in the Schwörhausgasse and has an angle of inclination of 9 to 10 degrees due to a foundation lowering. Today, the former fisherman’s house is managed as a hotel and is a popular attraction in the city.

The highlight in Ulm and the landmark of the city is the Ulm Minster,built in gothic style, the foundation stone of which was laid in 1377. When we stood on the Münsterplatz in front of the building, we were very impressed, because the 161.53 meter high tower, completed in 1890, is the tallest church tower in the world. If you want to climb it, you have to climb 768 steps up to the top viewing platform. You will then be rewarded with a fantastic panoramic view of Ulm and Neu-Ulm as well as in very good, clear weather even on the Alps.

It is very interesting that the church was financed exclusively by the citizens of the city. This means that due to a lack of money, construction was often halted, so that the cathedral was not completed until 1890 – 513 years after the start of the construction work.

Around the Town Hall

The historic town hall on the market square is a real feast for the eyes due to its elaborate exterior painting from the early Renaissance. The building’s construction history began in the 14th century and consists of three different components. The oldest part of the building was built in 1370 as a “new department store”; in 1419 it was first called the town hall. On the eastern facade of the building is an astronomical clock from 1520, whose mechanics were destroyed in World War II and renewed in 1952.

In the immediate vicinity of the historic town hall is the 35 m high glass pyramid of the Ulm Central Library. This is where the Middle Ages and modernity meet directly. Since its completion in 2004, there has been a constant controversy as to whether the extraordinary building fits into the historic cityscape of Ulm.

The Schwörhaus & the City Wall

The Schwörhaus is an imperial representation building built at the beginning of the 17th century. Today, the building is used by the Ulm City Archives as a house of city history. On the so-called Schwörmontag, the penultimate Monday in July, a big city festival takes place in Ulm. The official focus of this festival is the public account and the oath of the mayor of Ulm on the balcony of the Schwörhaus. A tradition that dates back to 1345.

On the banks of the Danube is the Ulm City Wall, which was built in 1480 and is now freely accessible and accessible at any time as a 600 m long promenade path. Further parts of the old city walls can be found in different places in the city, e.g. at the trench houses, the Adlerbastei or in the area of the fisherman’s quarter. Apart from the butcher’s tower, none of the former towers of the city walls have been preserved.

The trench houses in the Soul Trench

A popular photo motif in Ulm are the so-called trench houses in the Soul Trench. They were built in 1610 and 1633 as simple accommodations for the Ulm city soldiers. Today, the small terraced houses are still inhabited.

The BerblingEr Tower, tilted 10 degrees, is a 20 m high, walk-in artwork on the banks of the Danube, which was opened in June 2020. The red and white lookout tower is very unusual at first glance, but a great photo motif. It was built in memory of the “Schneider von Ulm” and aviation pioneer Albrecht Berblinger, who attempted the first gliding flight with self-made wings at this very place in 1811 – but failed.

Other sights in the surrounding area

In the Ulm area there are other sights, which we have taken a closer look at.

The Blue See in Blaubeuren

About 20 km west of Ulm is located on the eastern edge of the Swabian Alb of the Blautopf in the town of Blaubeuren. The Blautopf is the second-richest karst spring in Germany and a source of blue, which flows into the Danube after about 22 km in the city of Ulms.

When we arrived at the lake, we did not trust our eyes: because the water of the lake shines in a more or less intense but permanently striking shade of blue, depending on the light. The name “Blue Pot” does not come by chance 😉 the reason for this is the physical effect of the light radiation on nanoscale lime particles, which do not or hardly connect in the water. Due to their small size, the blue light is preferred to scatter, which then produces the blue glow.

Around the lake is a landscaped path, so that you can look at the blue pot from different angles. We took a lot of time for the visit and also waited until the sun came out behind the clouds, because then the water color shimmers more intensely. A beautiful photo motif directly on the lake is also the historic hammer work, which fits nicely into the surroundings. Adjacent to the Blautopf is the monastery Blaubeuren, founded around 1085.

If you are travelling in or around Ulm, you should definitely make a short detour to the Blautopf. There is no admission due and a visit is very worthwhile!

The Roggenburg Monastery – about 30 km southeast of Ulm and founded in 1126 – is a monastery of the Premonstratensian Order. Until secularization in 1802 (repeal as a monastery and nationalization of the property), this place filled the spiritual life of the Premonstratensians, who built the Baroque complex, which still exists today. 180 years later, a new convent has returned to the historic monastery. Since this recolonization, efforts have been made to renovate existing buildings and to create a concept for the use of the monastery grounds. Today there is an educational centre, a museum, a monastery shop and a monastery garden with an ivy labyrinth and herb garden. The centrepiece is the monastery church “Mariä Himmelfahrt”, one of the most important buildings of the Rococo in Swabia, which was completed in 1758. It is integrated into the monastery building and is entered from the side. The interior of the church is very magnificently decorated with many frescoes and figures as well as an imposing organ.

For one night we stayed in the Klostergasthof Roggenburg and were able to discover the culinary pleasure world of the inn with a 3-course menu in the evening. Delicious!

A map with all attractions in Ulm & Neu-Ulm

On the following Google MyMaps map we have mapped the most important sights of the two-country city Ulm/Neu-Ulm.