Today we had a visit to the island of Floreana, which is located south of Santa Cruz.

Day
52
of our trip around the world

The island of Floreana is the smallest of the four inhabited islands of the Galapagos archipelago, has just 100 inhabitants and a small base of the Ecuadorian navy.

We found this story of the island interesting: when Floreana became the port of call for the English whaling ships, the crews also used the island as a mail handling point. In what is now known as Post Office Bay, a large barrel was erected in which the ships arriving from Europe sent letters to their homeland. Returning ships emptied the barrel and took the letters with them for onward transport to Europe. Although no more whalers dock in Floreana today, the tradition has been preserved. A post barrel still exists, but now it is used by tourists in the same way as before. [Quelle Wikipedia]

The ferry to Floreana

Shortly after 8 o’clock our ferry departed with about 25 people on board. The speedboat crossing took just under two hours and we could even see a few dolphins. We had taken one tablet against seasickness in advance and fortunately had no problems on the trip… in contrast to many others on the boat 😉

The ferry ride on Galapagos can get quite rough from time to time. If you are not used to the movements, high swell can easily lead to seasickness. Until now, we as divers rarely had problems with it, but on the crossings between the Galapagos Islands it also caught us quite.

Our tip: In order not to become seasick, it is advisable to get a few tablets against seasickness beforehand! This can be found in every pharmacy on Galapagos (10 pieces = $1) or in advance already here at home e.g. from Ratiopharm or Aliud . After our horror trip we got “anautin” tablets with the active substance “dimenhydrinate” from our guide in Santa Cruz… and the little things help really amazingly well! We still take these tablets today with every trip on the water, where it can get a little more violent. And since then we have never again become seasick 🙂 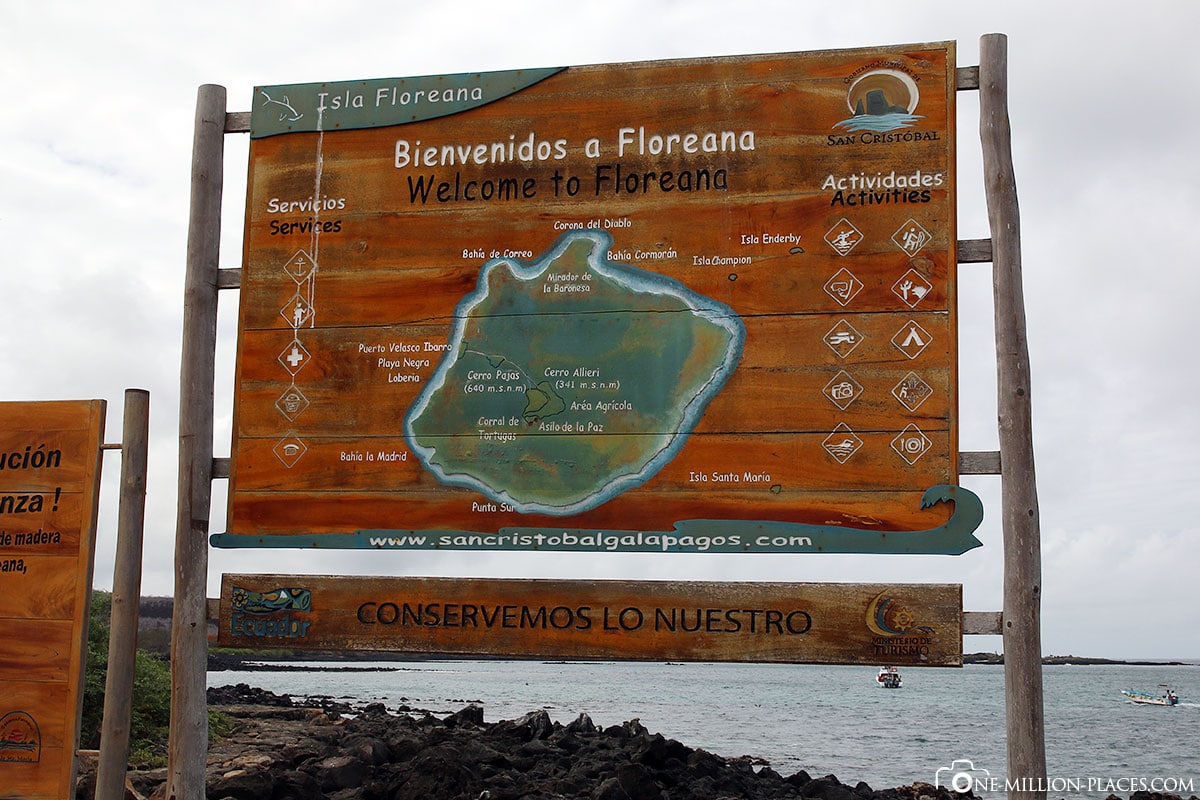 The giant tortoises on the island of Floreana

Arriving in Floreana, we took a small open-air bus to the “Asilo de la Paz”, a 450 meter high mountain in the interior of the island. Due to a natural source of fresh water, this place was first inhabited by the first settlers of the island – that was a Berlin dentist with his girlfriend in 1929. If you are interested in the history of German immigrants on Floreana, you can type “Galapagos Affair” on Google. On the site, as before, we could also observe some giant tortoises on the island of Santa Cruz.

The figures in stone

The vegetation is divided into two parts on Floreana: there are dry regions with bare trees, cacti and ground cover. On the other hand, on the slopes of the crater remains, one finds a lush rainforest vegetation. Near the fresh water spring you will also find a face carved in stone, which reminds a little of the figures on the Easter Islands.

Snorkeling on the beach Playa Negra

After lunch we had time to go to the beach “Playa Negra” and snorkel. In addition to many fish, we have also seen some sea turtles there. And of course you will also find sea lions, iguanas, pelicans and lots of cliff crabs everywhere.

The return trip to Santa Cruz

At half past three we walked back to the jetty. Here you can also find the marine iguanas and sea lions. Luckily, the sea had calmed down a bit and so the return trip to Santa Cruz was relatively relaxed.