After our day trip to the Hanseatic city of Stralsund, we had some time on the way back to Usedom to see the university and Hanseatic city of Greifswald. The city is not very large, so you can easily explore the main sights in two to three hours.

Things to know about Greifswald

The university and Hanseatic city of Greifswald is located on the Baltic Sea, between the two islands of Rügen and Usedom. The city has about 60,000 inhabitants is thus the fifth largest city in Mecklenburg-Vorpommern after Rostock, Schwerin, Neubrandenburg and Stralsund. Greifswald is one of the most popular university towns in Germany. About 20% of the total population are students of the university, whose history dates back to 1456. In addition, the city is also referred to as the “cradle of Romanticism”. The German painter Caspar David Friedrich was born here in 1774. Many of his paintings show that he was strongly inspired by Greifswald. Some original paintings of Friedrich can be seen in the Pomeranian State Museum.

A beautiful aerial view of Greifswald can be viewed here.

The history of the city of Greifswald in a brief and concise way:

The Hanseatic city of Greifswald in Mecklenburg-Western Pomerania

The historic old town of Greifswald

We started our walk through the city on the generously designed market square, which is the heart of the historic old town. With its size of 11,000 square meters and its rectangular design, it is outstanding in northern Germany. Particularly striking are the two medieval-Hanseatic townhouses Markt 11 and 13, which were built in the 14th/15th. It was built in the 19th century in the style of brick Gothic and are therefore the oldest buildings on the square.

The most beautiful photo motif on the market square for us is the Gothic-Baroque town hall, which dates back to the 13th century, with St. Nikolai Cathedral in the background. 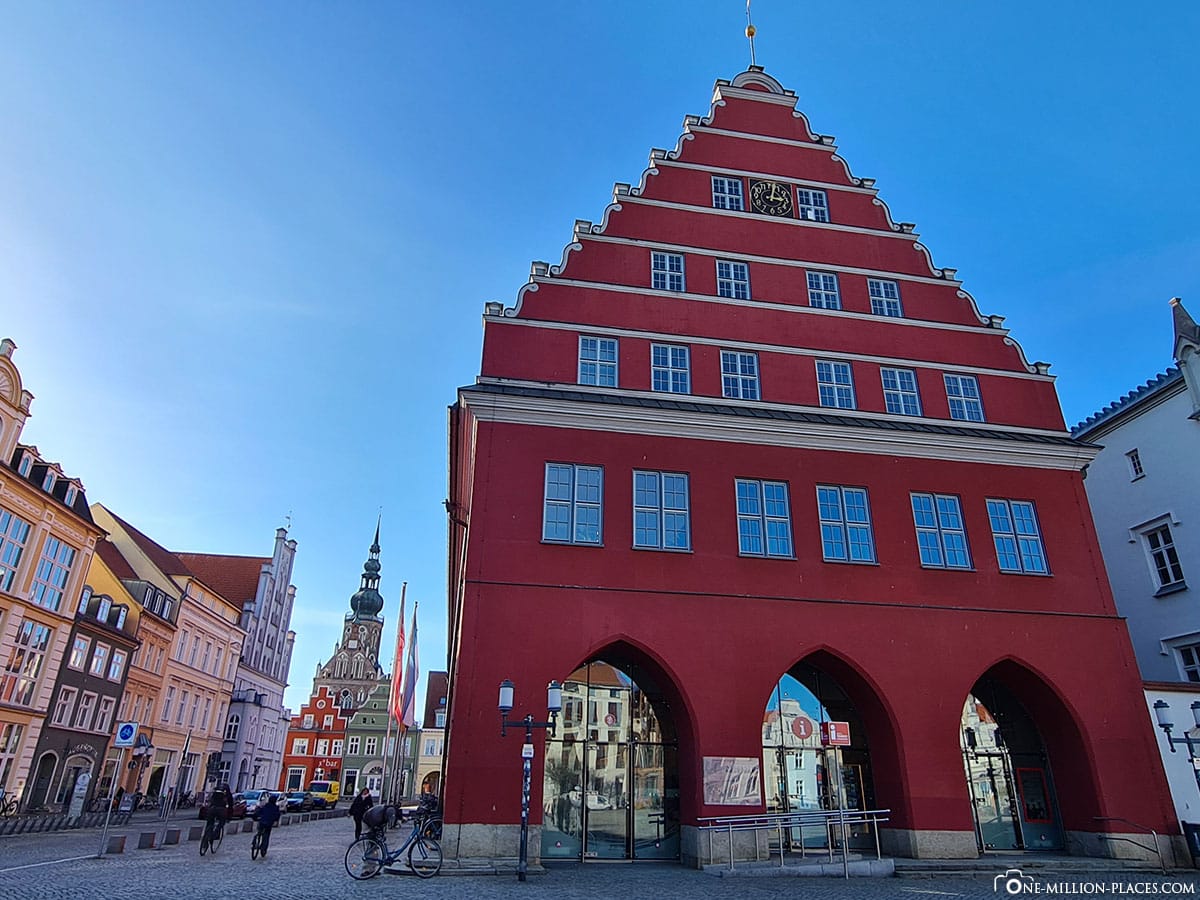 City administration of the university and Hanseatic city of Greifswald

The historic old town of Greifwald is characterized by its medieval brick Gothic, various university buildings and its three Gothic brick churches. Built around 1263, St. Nikolai Cathedral is a landmark of the city and is located in the western centre. In the immediate vicinity is the main building of the Greifswald University, which was founded in 1456 and is thus one of the oldest universities in Central Europe. The church of St. Mary, built around 1260, is the oldest of the three large city churches and is often referred to colloquially as “Dicke Marie”. St. Jacobi from 1280 is located on the western edge of the city center and is the smallest of the three main churches.

The museum harbour with the catch tower

From the historic old town we reached the Greifswald Museum Harbour, which is located directly on the river Ryck and with its more than 70 ships, is considered the largest museum harbour in Germany. Here, historic ships are restored, maintained and made accessible to the general public. In fine weather, a walk along the Ryck shore is worthwhile, because in front of the respective ships, signs inform about the type of ship, year of construction and history. The 13.5 metre high catch tower, which was built around 1270/80 and once belonged to the city wall, is very striking at the harbour. Later he acted as a powder tower and observatory; today it is used by the harbour master of the museum harbour.

The district of Eldena – monastery ruins and windmill

In the largest district of Greifwald there are two very beautiful sights, which we have reached by car due to the distance to the city center. On the one hand, there is an old windmill and an impressive monastery ruin.

Founded in 1199, Eldena Abbey is a former Cistercian abbey and was the most important monastery in the region in the Middle Ages. Once called Hilda Monastery, it was later named after the village of Eldena, from which the Hanseatic city of Greifswald began in the middle of the 13th century. Today, the monastery is only preserved as a ruin, which can be visited free of charge. The monastery gained national fame through the romantic painter Caspar David Friedrich, who made it the motif of his paintings.

About a 10-minute walk from the ruins of the monastery is the Bockwindmühle Eldena, which was built in the first half of the 18th century. Until 1932, grain was actually milled here, but the mill fell into disrepair in the following decades and finally collapsed in 1972. Thanks to a support society, a mill replica was inaugurated in 2002, which can still be visited today. 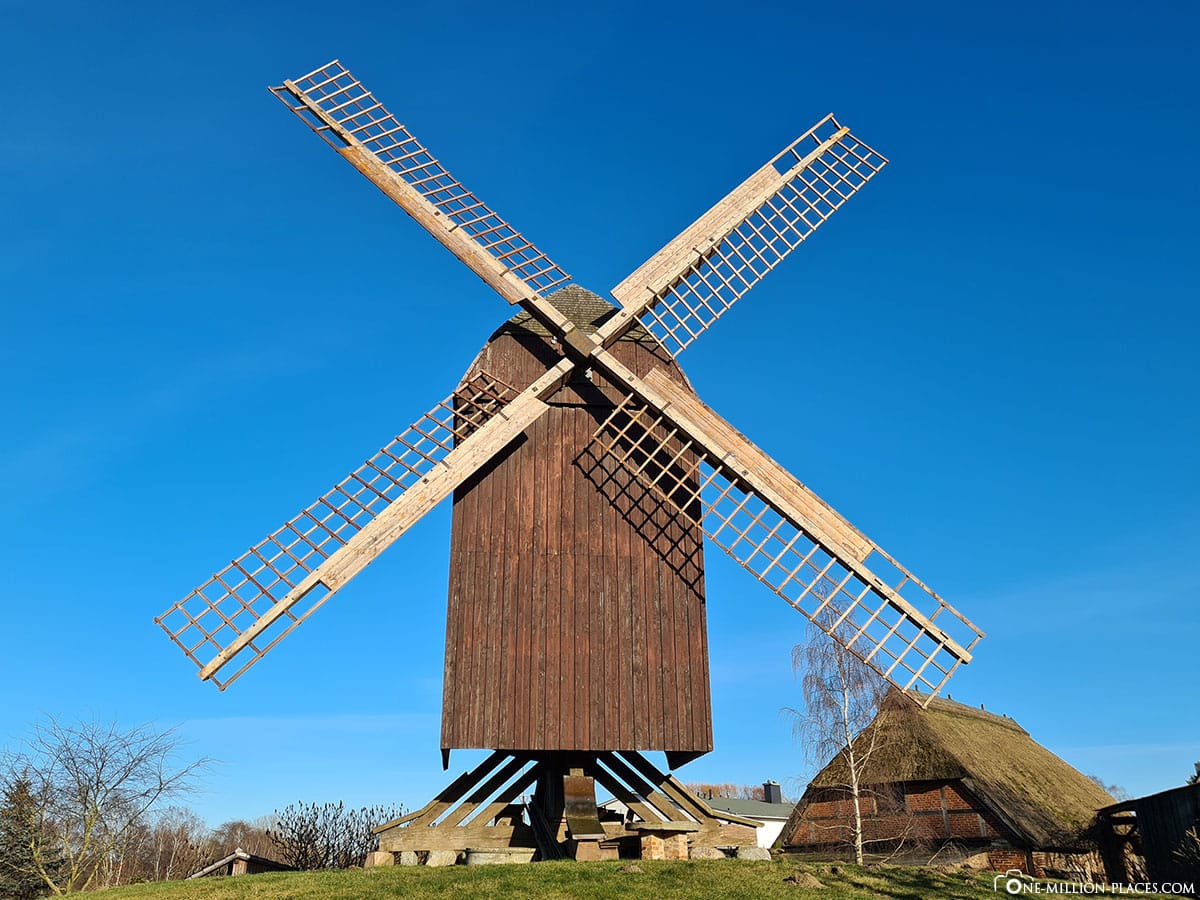 The 800-year-old district of Wieck has developed from a former fishing village. We could see and feel that Wieck was able to maintain this maritime flair to this day during our walk along the Ryck shore. The most famous landmark of the district is the Wiecker Holzklappbrücke, which was built in 1887 according to the Dutch model. It is considered one of the oldest, functional wooden folding bridges and is a great photo motif. Since 2001, the bridge has mainly served as a pedestrian bridge; only residents are allowed to cross the bridge with their cars.

Other sights in Wieck are the fishing port, the many thatched houses, the Bugenhagen church as well as numerous cafés, bars, restaurants and hotels.

A map of the sights of Greifswald

On the following Google MyMaps map we have mapped the most important sights of the Hanseatic city of Greifswald on the Baltic Sea.

Map of sights in the Hanseatic city of Greifswald