After 9 days of wonderful in Peru we went on to Guayaquil in Ecuadortoday. Guayaquil served only as a stopover for the onward flight to the Galapagos Islands.

Day
48
of our trip around the world

Our flight from Lima to Guayaquil

We started a little late today with LAN Airlines in Lima (Peru) and landed in Guayaquil (Ecuador) at about 12 o’clock.

Our hotel in Guayaquil

At the airport we were picked up by a shuttle bus from our hotel Courtyard Marriott. And we were lucky, because we could also check in right away and to our room.

Hotel Courtyard Guayaquil is modern and the rooms are spacious and clean. The free airport shuttle worked well. Simply write an email to the hotel in advance with the exact arrival time. The return trip to the airport is only at certain times. We were advised by hotel staff to take a taxi to the city centre only for security reasons. Since these cost only 5 USD each way, this is also ok. It was a pity that the hotel had no city maps of Guayaquil. In the immediate vicinity of the hotel are a shopping centre, a large supermarket and also a McDonald’s. This hotel is not very convenient for Guayaquil, but we liked our stay. 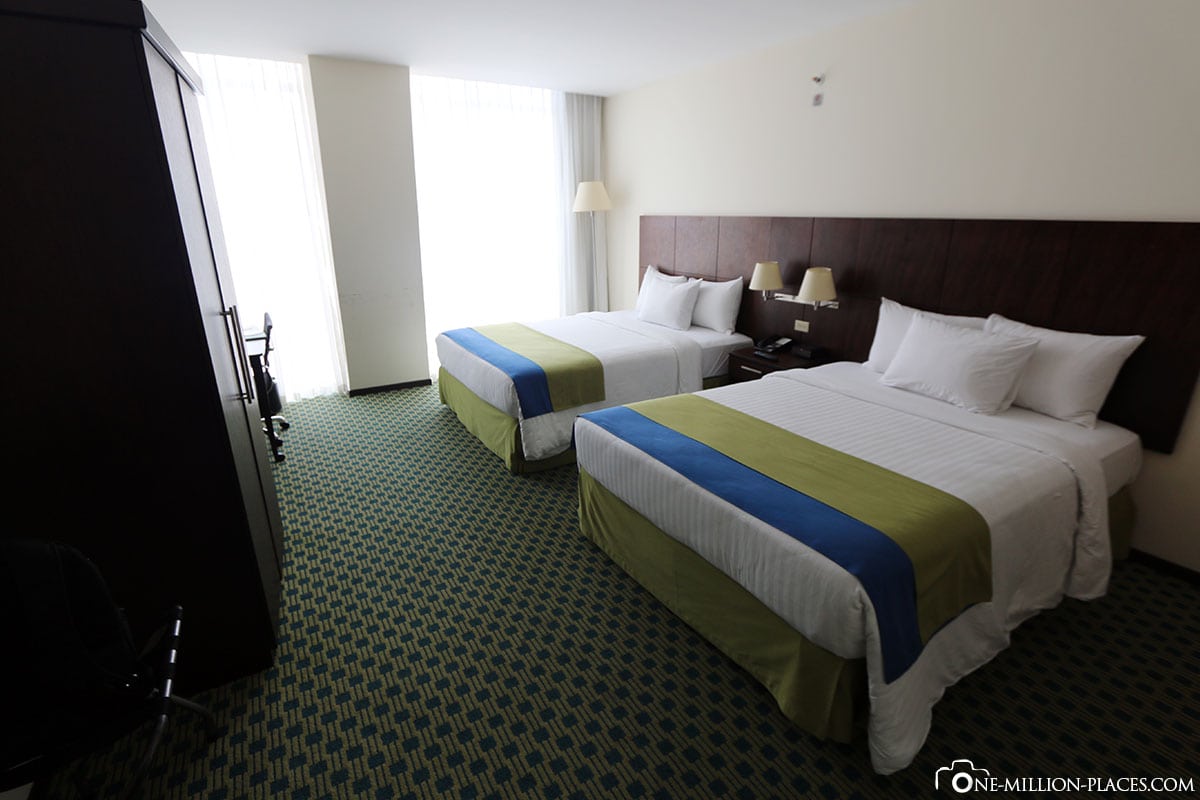 Our room at Courtyard Marriott Guayaquil

The Iguanas in the Park Seminario (Leguan Park)

We wanted to use the rest of the afternoon to take a look at the city. Guayaquil is Ecuador’s largest city with 2.5 million inhabitants and has the most important port for the country. The city is located on the west bank of the Guayas River, which flows into the Pacific Ocean.

We were advised by hotel staff to take a taxi to the city and not take a bus because they are too dangerous. When we googled shortly after the city and security, we also knew why: even the Foreign Office says the city is at increased risk of crime. This unsettled us a bit, so that for safety we simply left all valuables (the SLR camera, money, mobile phones) in the hotel and then let us be taken by taxi to Parque Seminario.

Park Seminario is listed on Tripadvisor as one of the few attractions in the city. The special thing about the park is that dozens live free of ciders here, which is why it is also referred to by many as “Iguana Parque”. It is not a zoo, but a normal small city park, which also costs no admission. The iguanas are really everywhere in the small park. They are all very trusting and accustomed to the people, so that you can touch them without any problems. Directly opposite the park is the Metropolitan Cathedral.

A video of the iguanas in the park

It is very interesting to see how the clouds and the fog move constantly above and between the individual mountain slopes and over the ruins.

That’s it with our little downtown visit of Guayaquil. There is not much to see here and the city seems anything but beautiful and welcoming. Since our hotel was really very good, we were able to end the rest of the day here quite comfortably, before we go to the Galapagos Islands tomorrow lunchtime.