After breakfast we left today at half past nine. The first stop on our way was the Hutt Lagoon after about 300 kilometers – a pink lake that gets its color from beta-carotene-producing algae.

The Hutt Lagoon at Port Gregory

We had seen a picture of the lake in a brochure, and it looks really great. From the street we could also guess the pink coloration, but we couldn’t really see anything.

So we drove relatively quickly towards Kalbarri National Park. However, the route is relatively unspectacular. There were few cars on the road (which was great) and there wasn’t much to see except for a lot of bushland. Kalbarri National Park starts below the town of Kalbarri. Along the up to 100 m high cliff there are some beautiful viewpoints of the so-called Costal Cliffs. We looked at the Natural Bridge, Island Rock and eagle gorge.

After a few kilometers you reach the coastal town of Kalbarri, which you have to pass if you want to go to the actual (chargeable) part of the national park. In the national park there are some viewpoints along the Murchison River, which runs through the landscape. The first points are reached via a 25 km long access road, which is initially asphalted, but then after 12 km becomes a sand and gravel road. 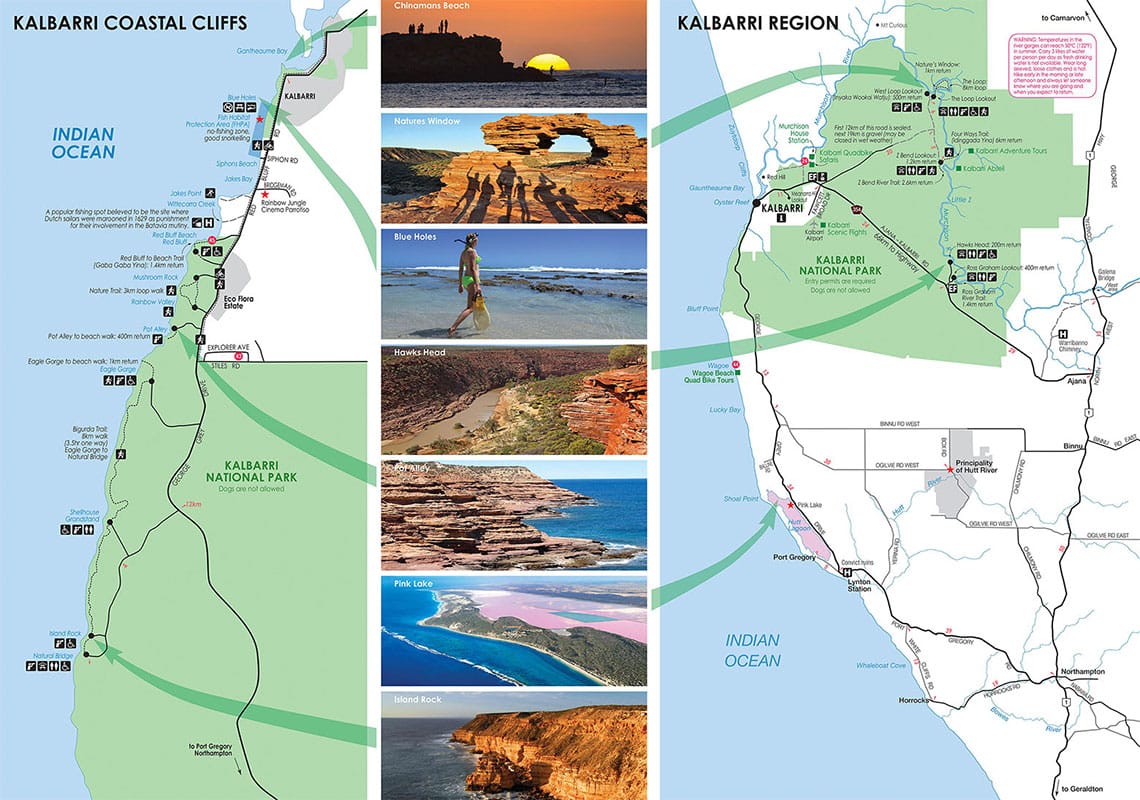 A map of Kalbarri National Park

The Natures Window & the Canyon

From the parking lot, a 500-metre walk leads to The Nature’s Window – probably the most photographed motif here in the park.

The canyon, on which you have a great view from above, unfortunately did not lead any water. Actually, there is also a nice hiking trail down along the river, but with a dried-up river this makes little sense.

The way to the observation deck and back reminded us a bit of our trip to Ayers Rock, because here too we were followed by insanely many flies, who wanted to go into our eyes, nose and ears. It wasn’t quite as violent as last year at Ayers Rock, but it was insanely annoying when you’re busy beating yourself all the time. We would have liked to sit down to enjoy the view of the canyon, but unfortunately that was impossible. Australia really has a flying problem.

Every second person runs around here with a net around their heads, which we hadnot bought separately. But it’s certainly not the worst investment against the bush flies, especially if you want to go on longer hikes. In hindsight, we would have liked to have had that. These can be purchased here at Amazon relatively cheaply in advance.

So there were quick some photos and then back in the car and to the next point, the Z Bend Lookout. Here, a 600 m long walk leads to a viewing platform,from which you have a beautiful view of the river – and we were lucky, because there was a bit of water in the river bed. After that we looked at the Ross Graham Lookout. But since at the moment there is almost no water in the river, everything seemed very dry and rather bleak. Since we still had 160 kilometers to our next accommodation in front of us and it is getting dark at about 6 pm, we had to hurry up a bit. Driving in the dark is not recommended due to wildlife. We have already seen an infinite number of dead kangaroos on the side of the road during the day, so we didn’t want to run into the car and we see it too late because of the darkness.

Around 7 p.m., we reached the Billabong Homestead Motel, which is located in the middle of nowhere, halfway between Geraldton and Carnarvon. The motel is very simple and functional, but we were actually positively surprised. The room was simple but good. One even had a bathroom ensuite with hot shower. However, the air conditioning in the room is very noisy. A fridge and TV are provided in the room. In the evening we ate in the restaurant. The food was very tasty and really ok in terms of prices. Highly recommended for passers-by who can no longer make it to the next place.