We were already looking forward to today, because we have booked a tour where you can swim with whale sharks on Ningaloo Reef.

Start of our “Swim with Whalesharks Tour”

We already experienced swimming with whale sharks on the island of Cebu (Philippines) in 2013 and were so enthusiastic about it that even then it was clear to us that we would repeat this experience at some point. And today it was time. Around half past eight in the morning we were picked up from our hotel by a small bus from the Exmouth Diving Center and drove about 30 minutes to the boat ramp. From there we went directly on the boat with a small tender boat. Seven other people came with us. First we made a small snorkel stop, which was located not far from the shore. Here we could even observe a turtle.

A briefing for swimming with whale sharks

In the meantime, the so-called Spotter Plane could go into the air and look out for the whale sharks from above. We also had an attentive skipper who always kept his eyes open, but so the chances were greater to see whale sharks. After snorkeling we got a short briefing on how to behave towards the whale sharks (at least 3 meters distance, do not touch, etc.)

As soon as the briefing was finished, it was already said: “Get ready, a whale shark“. 5 minutes later we all jumped into the water, with us a guide and a photographer. And then came the whale shark swam directly towards us – a approx. 8 meter big animalthat swam peacefully through the ocean and didn’t even pay attention to us. Every year from mid-March, the whale sharks are here in the Ningaloo Reef as they move north on Australia’s west coast in search of fodder (mostly plankton). We followed the animal for quite a while, took hundreds of photos and videos and then went back on the boat. As soon as we dried up, it was called again ‘A whale shark‘. So right back into the water 🙂 And again a whale shark slowly swam towardsus. We followed this for quite a while and snorkeled next to him. The sight was just great. The whale sharks seem to glide quite leisurely through the water and we had to paddle quite nicely with our finsto keep up. Luckily the sea was almost without waves and we could have done it for hours, but at some point you leave the forces. Some really nice pictures have been created. Our tour price included the photographer’s photos and video, so we got them as a reminder afterwards. Here, too, great pictures have been created. Especially the image from below against the sun looks just magnificent!

After this great experience there was a nice lunch on board and we could relax a bit, sunbathe and let the wind blow around our noses.

Swimming with a giant manta

But it didn’t take long, and the crew discovered a manta in the water. So it was time to put on the snorkeling things again and get into the water! And in fact, in front of us “floated” a manta with a wingspan of about 4 meters through the sea – a great sight. WOW – so today we were lucky enough to swim side by side with 2 of the greatest creatures in the water 🙂

In the early afternoon we were back in the hotel – what a great, eventful and exciting day!

Our conclusion to today’s tour

There are really many of the “Swim with Whalesharks” tours in Exmouth and these are not exactly cheap with about AUD 400 (approx. 260 €). But we think it’s definitely worth it! What you get to see there is incredibly impressive and you can only experience this up close in a few places in the world! In the Diving Magazine (5/2016) there is a great report about “snorkeling with giants“. Here you will also find a great overview of where to find the world’s best spots for whale sharks: 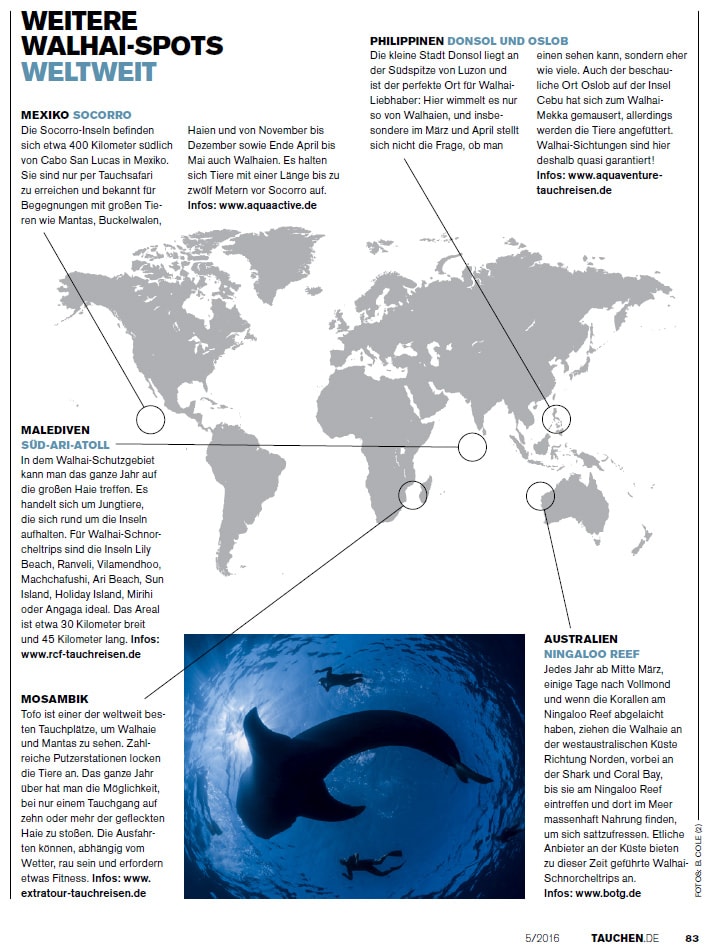 The Diving Journal of May 2016

We can only recommend our selected agency Exmouth Diving Center here. The guides were all super nice and you realized that they really enjoyed their great job – who can say that the ocean is his office 🙂

Our video of swimming with whale sharks & mantas

Here is our video for swimming with whale sharks and mantas in Exmouth.