Our goal today was Shark Bay, a protected area of the UNESCO World Heritage Site on the west coast of Australia about 800 kilometres north of Perth.

Our drive along the World Heritage Drive

From our Accommodation Billabong Homestead Motel, you will leave the North West Coastal Highway after about 50 kilometres and drive along the 150 km long World Heritage Drive. It has been a UNESCO World Heritage Sitesince 1991, 70 of the area is water and 30 land.

Shark Bay is a bay on the west coast of Australia. William Dampier named the area “Shark Bay” in 1699 because of the many sharks that occur there (28 different shark species). The most famous sights are the Hamelin Pool Marine Nature Reserve in the south of the bay, the white Shell Beach, the viewpoint Eagle Bluff, the small town of Denham, Monkey Mia with its dolphins and the Francois Peron National Park at the tip of the peninsula. Shark Bay is an area of high zoological importance. Since 1991 it has therefore been part of the UNESCO World Heritage site of mankind. The bay is home to dolphins, about 10,000 fork-tailed sea cows (dugongs), sea turtles, rays, sea snakes, whales and many sharks. 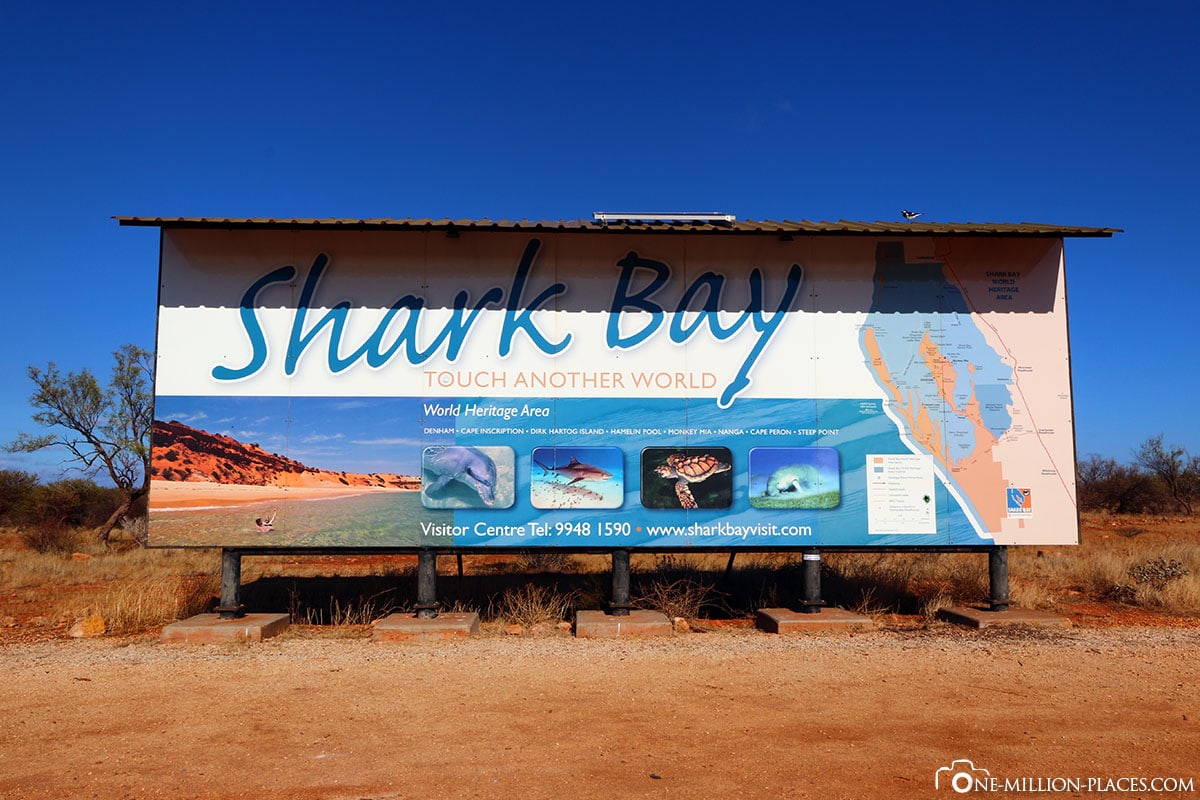 The Hamelin Pool in Shark Bay

The first stop for us was the Hamelin Pool, in which the today very rare stromatolites – one of the oldest life forms on earth (about 3.5 billion years old) – live. It is named after Jacques Félix Emmanuel Hamelin, who passed by in 1801 as part of an expedition. Here in Shark Bay, they still live and grow today, as the salinity is twice as high as in the open ocean. This is also the reason why they have no natural enemies. The growth is about 1 cm in 30 years. Thus, formations of about 1 m height are almost 3000 years old! For the viewer (like us) it all looks very unspectacular – it looks like stones in the water. If you know the background, it’s different 😉

Next stop was after 50 km the Shell Beach. As the name suggests, Shell Beach is a beach made entirely of shells. From a distance it looks like an ordinary white long sandy beach. But when you walk barefoot and look closer, you quickly realize that they are billions of small white (heart) shells. Simply unimaginable.

The last stop off the coastal village of Denham was the eagle bluff viewpoint. A small gravel road leads to a parking lot from which you can enter the boardwalk. From up here you have a great view of the bay in front of you. The water is so crystal clear that you even have the chance to see sharks and turtles.

After a few kilometres we arrived in Denham. Here we have booked a room at the Hotel Heritage Resort for the next two nights. The receptionist received the receptionist was very nice. She also gave us tips for the surroundings on request. We were able to check in as early as 1 p.m. Our two-bed room had (a small) view of the pool. Unfortunately it smelled very musty, was dark and there are people running past it on the window side, because there the stairs go long. It is very generously designed with a table, 2 chairs and a sofa. When you come in there is a kind of kitchenette, but without appliances or other dishes. Only a fridge and an electric kettle (with tea and coffee ingredients) are provided. The wifi works very well and is free. Shaded free parking is available on site. In the immediate vicinity of the hotel is a small supermarket (IGA), where you can get all the things you need every day – but (as expected) at overpriced prices. Unfortunately, housekeeping did not work as it should. When we returned to the room at 2 p.m. in the afternoon, the bed was not made, the towels had not changed etc. When asked, we were told that according to the list, the room had already been cleaned in the morning. Basically, the room price for the ‘counter-performance’ is far too high. But the place is far away from everything, so unfortunately you have to accept it.

Since it was only 2 p.m. and we had some time until sunset, we asked the receptionist for tips for the surroundings. She highly recommended a trip to the nearby Francois Peron National Park, but also pointed out that we absolutely need a 4×4 car (we have) and experience of driving such a car in a sandy terrain (we don’t really have).

The pictures she showed us from the park were really beautiful. But we didn’t dare to drive our car into the park on our own. We have read many testimonials on the Internet, where people got stuck and then had to be towed for an insane amount of money. We didn’twant to risk that. It is strongly discouraged from driving into the park in a normal SUV. The decisive factor here is not the four-wheel drive function (which we would have had), but the ground clearance. Another option would have been to book a tour with an experienced guide, but it would have cost about 150 euros per person. It was just too expensive for us.

So we drove only briefly to the park entrance, which is still accessible with normal cars. Here there is an old (no longer in operation) sheep farm,which can be seen. Otherwise, however, there is not really much to see here. On the way to Francois Peron National Park is the Little Lagoon. There we then soned a little bit and at least let our feet hang in the cold water.

Denham has a population of just 600 and boasts of being the westernmost place in mainland Australia. The most important things, such as accommodation, two small supermarkets and petrol stations as well as restaurants are located directly on the waterfront that leads through the village. If you want to shop in Denham, you should know that food prices are really high. From our point of view, Australia is not in itself favourable when it comes to staple foods such as milk, fruit & vegetables, water or sausage & cheese. But in Denham, it’s all a lot more expensive than in the big cities. An ice cream or a bottle of Coke costs 3 euros, a white bread 4 euros and Not to mention Nutella (7 euros). Welcome to nowhere.