After our trip to Denham and Monkey Mia in Shark Bay, our journey continued up the west coast to the small village of Coral Bay.

The total distance from Denham via the North West Coastal Highway to Coral Bay is 560 kilometers. Along the way, we bought some drinks and food for the next few days in the town of Carnarvon in the last big supermarket (Woolworths). Food prices here are similar to those in Perth. But when it comes to petrol, you can tell you’re a long way from everything: that’s now a good 35 cents per litre more expensive than in Perth. But good, everything doesn’t help, without gasoline you just can’t get far 🙂

The track is not really exciting… some bushland, lots of sand and endless roads…

Our hostel in Coral Bay

In the afternoon we arrived in the small village of Coral Bay after a good 5 1/2 hours drive. Coral Bay consists of a few houses, a hotel, two restaurants, two caravan parks, smaller shops (e.g. supermarket, bakery, diving school) and a backpacker hostel. That’s it. In the latter we had booked a room with shared bathroom.

If you drive into the village, the hostel directly to the right is the first house. So you can’t miss it. Behind the house there is a large car park where you can park your car free of charge. We had booked a twin room with shared shower. The room is furnished in spartan style (2 beds and a medium-high wardrobe). The air conditioning in the room is super and insanely quiet. Bedding is available. Towels can be borrowed at the reception for a deposit of 10 AUD. At check-in you get a small basket with basic dishes (4 plates, 2 cups, cutlery). There is a shared kitchen with 5 large refrigerators (don’t forget to make food labels!) and plenty of cooking facilities. 2 microwaves are also available. The cooking equipment can be easily rented at the bar/reception (a deposit is not required). The shower rooms and toilets are fine. There are enough and they were reasonably clean. There is a swimming pool in the hostel’s courtyard. Wifi does not exist (more). There is a note at the reception that the cost of the provider was too high. Big minus point, as the internet advertises with free wifi. From the hostel you can reach everything on foot, including the beach. The place is very manageable. But besides the hostel there is a small supermarket, a bakery and a few other small shops.

Even if you can run the small “place” within two minutes, it was insanely crowded. Each room was occupied, every caravan place occupied. It’s still school holidays – well, we booked two months in advance. After we checked in, we grabbed our bathing and snorkeling clothes and ran to the beach. Here we snorkeled a little round and then relaxed until sunset on the beach. In the evening we cooked a bit in the hostel communal kitchen.

The Ningaloo Reef on the west coast of Australia

The Ningaloo Reef stretches over a length of 250 km on the west coast of Australia and is a UNESCO World Heritage Site. Unlike its famous big sister, the Great Barrier Reef, it is unusually close to the coast. In some places it is only 100 meters from the mainland. The practical thing is that you don’t have a long way to get there, but you’re already at the dive site in a few minutes. Our travelogue to diving on the Great Barrier Reef can be found here. 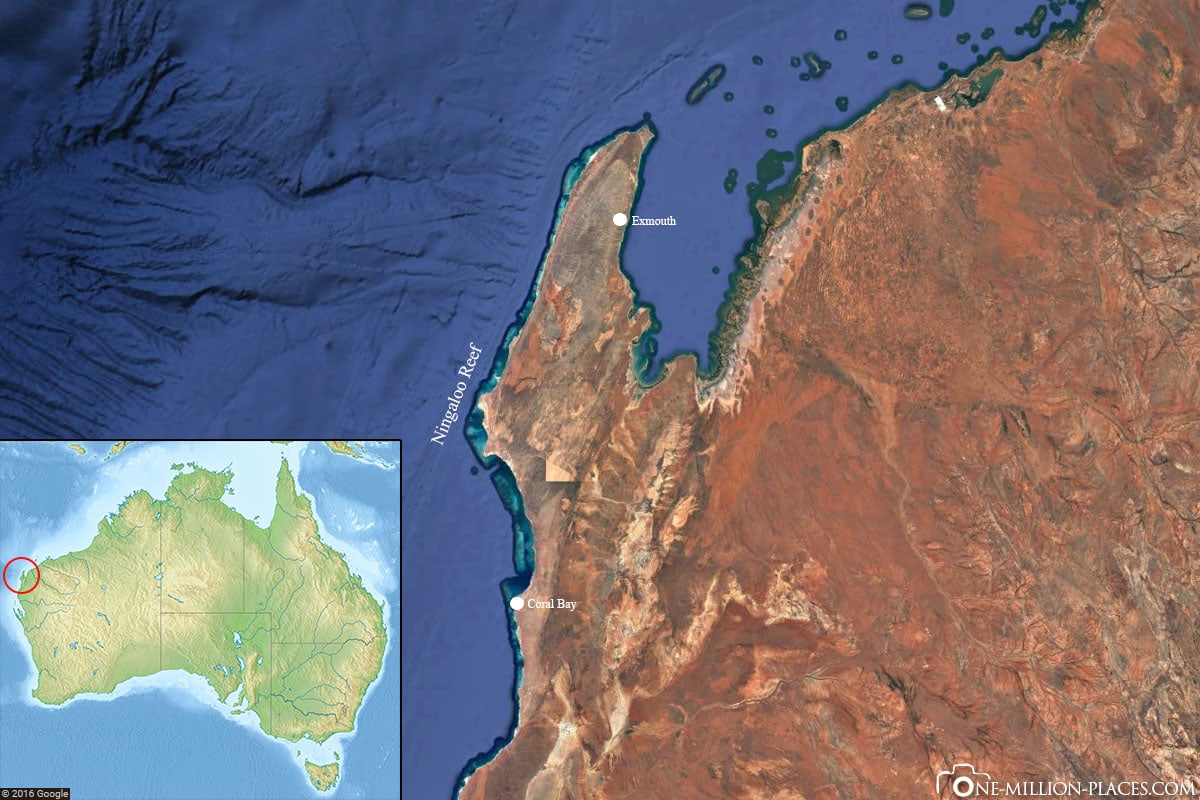 The Ningaloo Reef in Australia

We were a group of 9 divers, two diving instructors and a few snorkelers on board. Our first dive site was the Blue Maze, where we saw a turtle, parrotfish, blue dot rays and nudibranchs.

We used the surface time of about one hour between two dives for snorkeling with mantas. The skipper had been looking out and drove us to the places where he spotted a manta. We have seen several times the manta female Woopy, who calmly made her rounds. Unfortunately the view was really bad, so the pictures did not get good … At lunchtime there was also something delicious to eat on the boat.

The second dive spot was called Asho’s Gap, a natural cleaning station for sharks, where we saw 5 grey reef sharks, blue-spotted rays and a large swarm of barracudas. The cleaning station with the many sharks was really very cool – but otherwise the visibility was often not so good. Especially when snorkelling with mantas this was very annoying, because we were of course especially looking forward to it.

A video of our two dives in Coral Bay

Here is the video of our two dives and the swim with the manta.

After a nice day on the boat and in the water we were back in the hostel in the afternoon, filled out our logbook (in the meantime we have already 60 dives) and cooked something to eat.