After getting to know the islands of Mykonos, Santorini, Milos and Crete on a Cyclades cruise last year, we also wanted to explore the mainland of Greece this year. So it turned out that with Discover Greece we have put together a beautiful round trip that connects Athens, the island of Kefalonia and the monasteries of Meteora. Since Athens and the monasteries of Meteora have been on our bucket list for a very long time, we were looking forward to this journey 🙂

Our travel plans for Greece 2019

From Frankfurt we went with Aegean Airlines first to (1) Athens, where we had two days to discover the city with all its sights and attractions. From there we flew on to the (2) island of Kefalonia, where we stayed for three nights. Here we have roared across the island by car, visited romantic fishing villages, seen breathtaking bays and beaches and marvelled at the island from above from Mount Ainos. By ferry we went from Kefalonia back to the mainland to Killini and from here on by car to (3) Meteora. Finally we drove from Meteora to (4) Thessaloniki, from where our return flight went to Frankfurt.

Overall a wonderful trip through Greece and a great combination of city, island holiday, nature and culture 🙂

Our flight with Aegean Airlines

On a sunny Sunday evening we went with Aegan Airlines from Frankfurt Airport to Athens at 6 p.m. Aegean Airlines we already knew well from our last trip to Greece. The airline is a member of the Star Alliance association and has been named the best regional airline in Europe for the ninth time. Aegean offers direct flights from several German cities (e.g. Berlin-Tegel, Düsseldorf, Frankfurt am Main, Hamburg, Hannover, Munich, Stuttgart) to 5 Greek destinations (Athens, Heraklion, Kalamata, Rhodes, Thessaloniki) as well as other connections to 31 domestic destinations.

Our flight from Frankfurt to Athens was fully booked. Despite the short flight time of just under 2.5 hours, we were positively surprised that Aegean Airlines still offers a completely free beverage and food service. Other airlines have long since abolished these amenities and are demanding money for them, with Aegean this is still included in the ticket price. So there was a good selection of different alcoholic and non-alcoholic drinks as well as a hot pasta dish with side dishes (bread, butter, chocolate, crackers).

If you want a bit of entertainment on board, it makes sense to download the Aegean app before flying. With this you have access to games, music, newspapers, magazines and travel videos. Unfortunately, there are no movies, but this is completely ok with a 2.5 hour flight.

Just in time at 9.45 pm we landed at Athens airport – with an hour’s time difference. Unfortunately, the suitcases were a bit long in coming, but we were able to spend the time taking a look at the map of Athens. In the case of baggage claim, there are several stands with the city maps, one of which should be packed.

A taxi in Athens? Use the Beat app

From the airport you have several ways to get to the city center of Athens, about 35 kilometers away:

(1) Book a taxi via the Beat app
We drove from the airport to our hotel in a taxi booked in advance via the Beat app. Beat is a local app that was founded a few years ago in Athens as a start-up. This is a mediation service between licensed taxis and the passenger. In Germany, this is comparable to the myTaxi app (or from summer 2019: FREE NOW). Beat is now part of BMW and Daimler and expanded to Latin America (Lima, Santiago de Chile, Bogota, Mexico City). We were welcomed directly in the arrivals hall by our taxi driver Venediktos Kotzialis and already knew which car we would be driving. In the app you can also choose a specific driver in advance and even choose whether he can speak English etc.

With Venediktos we had our best taxi driver on all our previous trips: he was sympathetic, could speak very good English (since he lived in the USA for a long time), gave us information about country & people and of course brought us safely to our destination.

By the way, there is a standardized rate for taxis from the airport to the city center (or vice versa), which is currently 38 EUR during the day.

(2) Travelling by metro
It is best to follow the signs at the airport with the words “Train”. Before going to the tracks of metro lines 3, you buy the corresponding ticket at the vending machine or a counter. Line 3 connects the airport with the city centre of Sontagma and Monastirki Square. From there you can also reach other corners of the city very well.

(3) Use one of the express buses
From the airport, express buses also run to the city centre of Athens 24/7. More information can be found here. 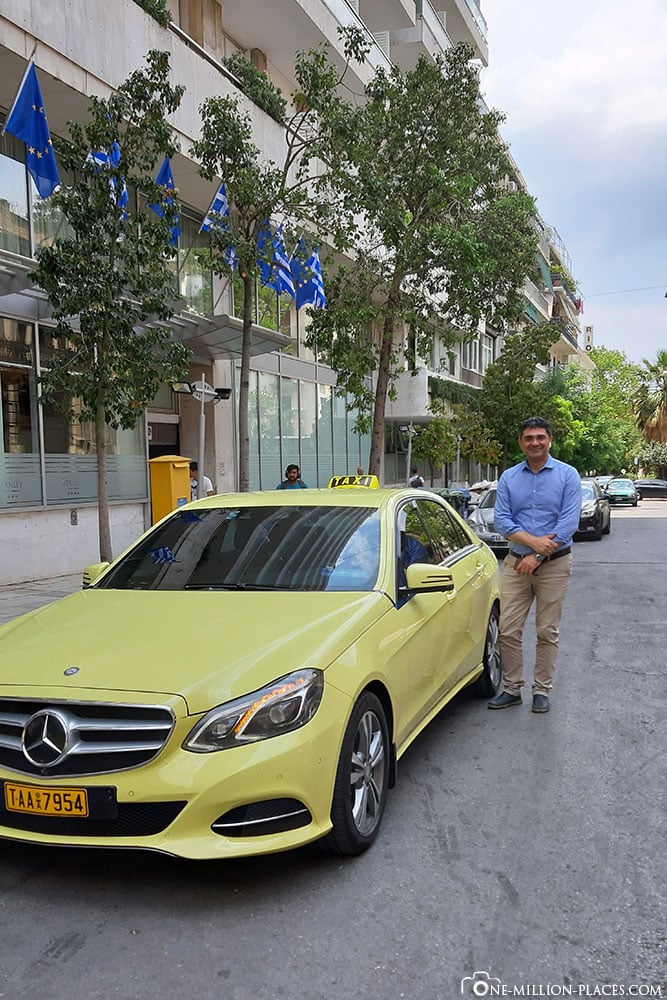 Our driver Venediktos in Athens

Our hotel in Athens

When looking for a suitable hotel in Athens, it was important to us, on the one hand, to pay for money and, on the other hand, to ensure that the connection to public transport is very good. After reading some reviews on TripAdvisor, we decided to stay 2 nights at Hotel Stanley, which we booked for 238 EUR including breakfast. The hotel is located right in Karaiskaki Square. The nearest metro station “Metaxourghio” on the red line 2 is only a 1 minute walk away and the hop-on hop-off buses stop right in front of the hotel.

The hotel makes a very clean impression, but we found our room to be a bit sterile and not very comfortable. The small TV, on which there were also German TV programmes, hung on the side of the wall and not in the middle in front of the bed, which was a bit strange. The bathroom was unfortunately very small and especially the shower very cramped. Breakfast was served daily from 6.30am, which was great if you want to start your sightseeing program in Athens early. At this time there was always a lot going on in the breakfast room. The buffet was very varied and there was everything your heart desires, from hot dishes to baguettes and cold cuts to lots of fresh fruit and muesli/conflakes. We have always been fed up here and tasted it too.

The hotel has a beautiful roof terrace, which also has the swimming pool. And the best thing is that you have a wonderful view of the Acropolis from here. You need a relatively large zoom lens like the Tamron SP 150-600mm F/5-6.3 Di VC USD telephoto lens,but even so the view is really great 🙂 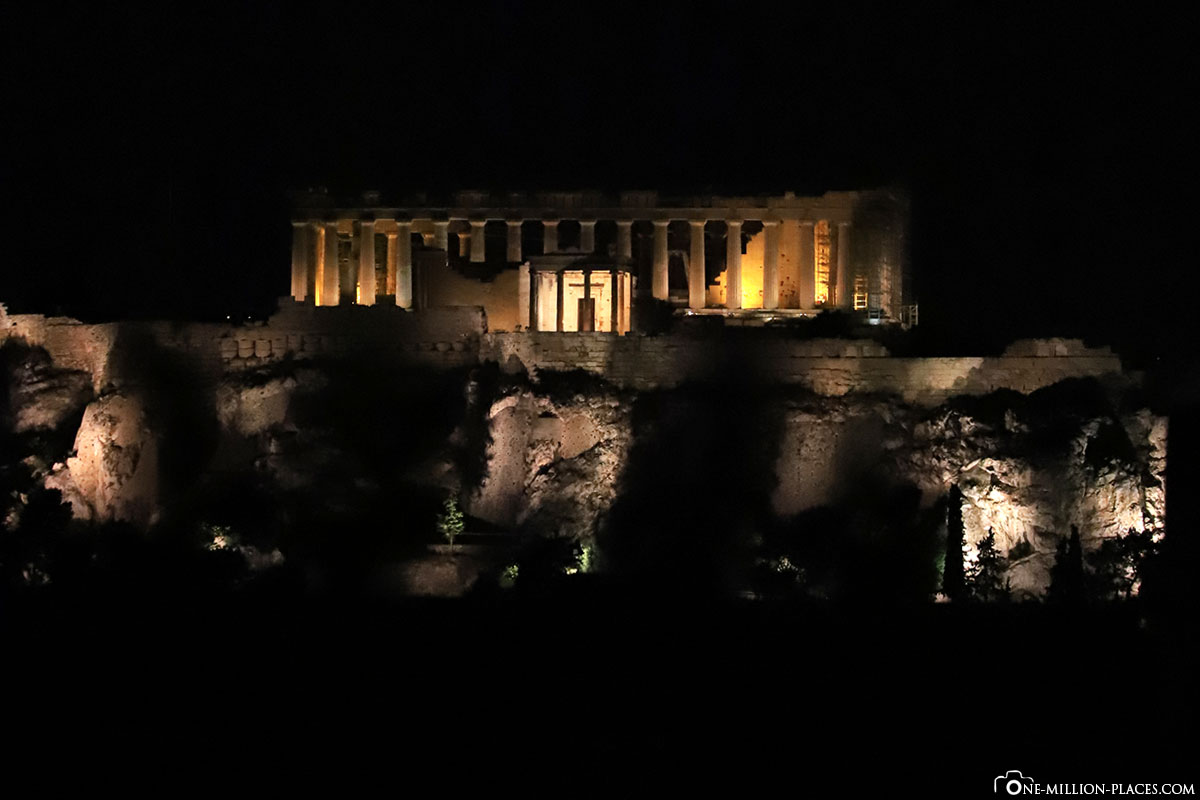 The illuminated Acropolis from the roof terrace of our hotel