She has been on our bucket list for a long time and we have been looking forward to the moment when we would finally see it: the Acropolis of Athens.

Things to know about the Acropolis

The Acropolis is actually the castle hill belonging to an ancient Greek city. The Athens Acropolis is probably the best known example of an acropolis, which is why the entire terrain is often referred to only as “The Acropolis” for simplicity. The Acropolis has dominated the cityscape of Athens for about 3,000 years and has been a UNESCO World Heritage Sitesince 1986.

The history of the Acropolis

The castle hill of Athens has a very long history, because it was already inhabited in the Stone Age. In the Mycenaean period, there was a palace of lords, around 500 B. Chr. temples were built here, the gods replaced the earthly rulers. A few years later, the Persians conquered Athens and destroyed the seat of these gods. With the debris, among others the perimeter walls were fortified, other pieces were used in the newly built temples.

The most important construction phase of the Acropolis was between 467 and 406 BC, when the Propylae, the Parthenon Temple, the Erechtheion and the Nike Temple were built on a flat, 156-metre-high rock. In the following years, monuments were mainly added. After Christianity had established itself, the Parthenon was converted into a church, smaller temples became chapels and on the Acropolis bishops resided instead of Greek priests. After the conquest by the Turks came the next change: the Parthenon became a mosque, the Erechtheion became the harem.

In 1687 everything changed: in order to expel the Ottomans, a Venetian commander had the Acropolis shelled, which led to an explosion of a powder magazine in the Parthenon and severely damaged the temple and other buildings. Further destruction occurred around 1800, when the Englishman Lord Elgin robbed numerous sculptures and brought them to England. It is thanks to the Greek King Otto that the Acropolis was placed under the protection of the state as an archaeological site and that it was to appear again as a national monument in its old form. Therefore, the Byzantine and Ottoman buildings were demolished.

Due to incorrect renovations in the first years, corrosion and pollution, the ancient buildings have suffered greatly and are being restored almost permanently. Therefore, the Acropolis today resembles a large construction site rather than a temple complex – it is almost impossible to see the castle hill without a crane. We were very lucky because we were on a holiday on the Acropolis and the construction work on that day stood still 🙂 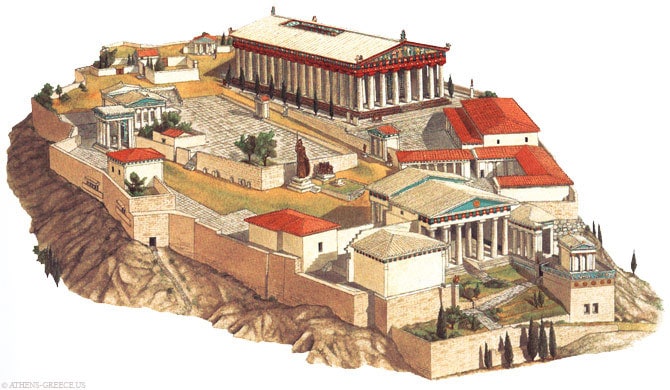 Reconstruction of the Acropolis of Athens

The best view of the Acropolis in Athens

Due to the elevated location of the Acropolis 156 meters above the city,one actually has a great view of the world heritage from almost everywhere. Nevertheless, there are some special viewpoints that we would like to introduce to you.

City mountain Lykavittos: The 277-metre-high mountain is the highest peak in the centre of Athens and offers magnificent views of the Acropolis and the Parthenon. The mountain can be reached either on foot or by a funicular, the station of which is located in the street of Od’s Aristoppou.

Rooftop Bars: Many hotels in Athens have a Rooftop Bar from where you can see the Acropolis. We haven’t visited a Rooftop Bar ourselves, but one of the best views is from the Hotel A for Athens, as you still have the great scenery of Monastiraki Square in the foreground. Even from our hotel The Stanley we had a very good view of the Acropolis, albeit a little further away. We have found more recommendations for beautiful Rooftop Bars at Lonely Planet.

Philopapposmonument: Another viewpoint is located on the 147 meter high MusenHill (Philopappos Hill) southwest of the Acropolis of Athens. The hill was named after a monument erected at the top of the hill in honor of the Roman senator Philopappos.

The Acropolis is visited by thousands of people every day. So if you want to have beautiful photos of the Acropolis and its buildings, where there are not hundreds of people on it, you have to get up very early. We were about 30 minutes before the opening at 8 o’clock at the entrance gate on Dionysiou Areopagitou street.

There are three different accesses to the Acropolis:

Here at the entrance gate two different snakes formed early on. On the left were those who already had tickets (like us) and on the right in front of the cashier’s house the people who still needed tickets. We recommend that you get tickets in advance. For example, this can be easily done online via the official ticket page.

A ticket for the Acropolis costs 20 EUR per person. We recommend buying a combined ticket directly for 30 EUR, which is valid for 5 days. This combined ticket includes several other cultural sites in Athens, such as Ancient Agora, Hadrian’s Library, North slope of the Acropolis, Olympieion, Roman Agora and South Slope of Acropolis.

For Athens there are several tourist maps,with which you get free, preferred or discounted admission to the attractions or museums.

For the city exploration of Athens we had the 1 Day Athens Unlimited Attractions Pass from iVenture. This one-day ticket costs around 71 EUR online. However, it should be noted that this is only worthwhile if you also use several offers of the card. And you have to keep in mind that the card is only valid on the day you buy it or use it for the first time!

We had used our card for admission to the Acropolis (20 EUR), the Panathinaiko Stadium (5 EUR), the Hop-On-Hop-Off Bus from Athens Open Tour (26 EUR) and a full dinner at Hard Rock Café Athens (28 EUR). We would have liked to have visited the Acropolis Museum (10 EUR), but unfortunately we did not manage this in time. In total, we used the day ticket to charge 79 euros. Unfortunately, some attractions, such as the Agora with the Temple of Hephaistos or the Temple of Zeus (Olympieion), are not allowed on the card and have to pay extra for these entrance fees. So you should calculate carefully whether such a card is really worth it. 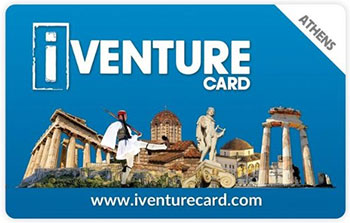 A Plan of the Acropolis

The following image illustrates the original reconstruction of the Acropolis with all its structures. We couldn’t find a plan from today’s point of view and we didn’t get one when we visited the Acropolis. But since everything is very centrally located, you can find your way around quite well even without a map. Otherwise you can look at the side of Wikivoyage.com again. There is also a detailed plan with the individual buildings. 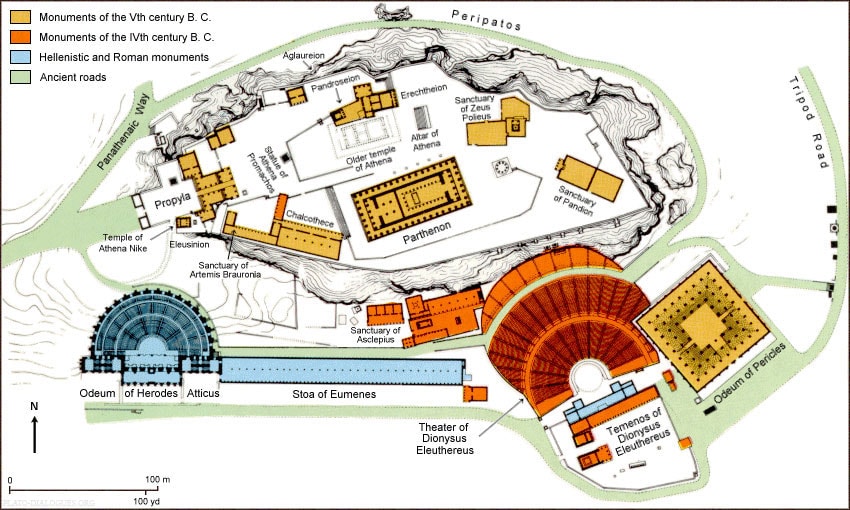 A tour of the Acropolis

After the entrance gates of the Acropolis had opened at 8 o’clock in the morning, we quickly walked up to the rocky plateau in a hurry to be able to take pictures without other tourists. This was actually possible for a few minutes, but within a very short time the temple complex was full. We have really rarely seen sooo many tourists in a spot at a sight. Really crazy!

As we walked up the way from the cash register, we first reached the Propyläen at the western entrance. These form the main entrance or gate to the Acropolis of Athens. A marble staircase leads up to the gatehouse of the Propylae, whose entrance is adorned by six columns. On the right side of the Propyläen is a rock with the Athena Nike Temple. You have to walk through the Propylaeto to get to the plateau of the Acropolis and explore the wider terrain.

And then we finally stood in front of it – in front of THE landmark of Athens, which is certainly one of the most famous buildings in the world 🙂 If we always had a picture of the Acropolis in our minds, it was usually the Parthenon that was emblematic of the Acropolis for us. And yet it is only part of the whole facility.

The Parthenon, about 70 metres long and 30 metres wide, is dedicated to the goddess of protection of the city of Athens, Pallas Athena Parthenos. It is certainly one of the most famous still existing monuments of ancient Greece, which has dominated the Athens Castle Hill for almost 2,500 years. 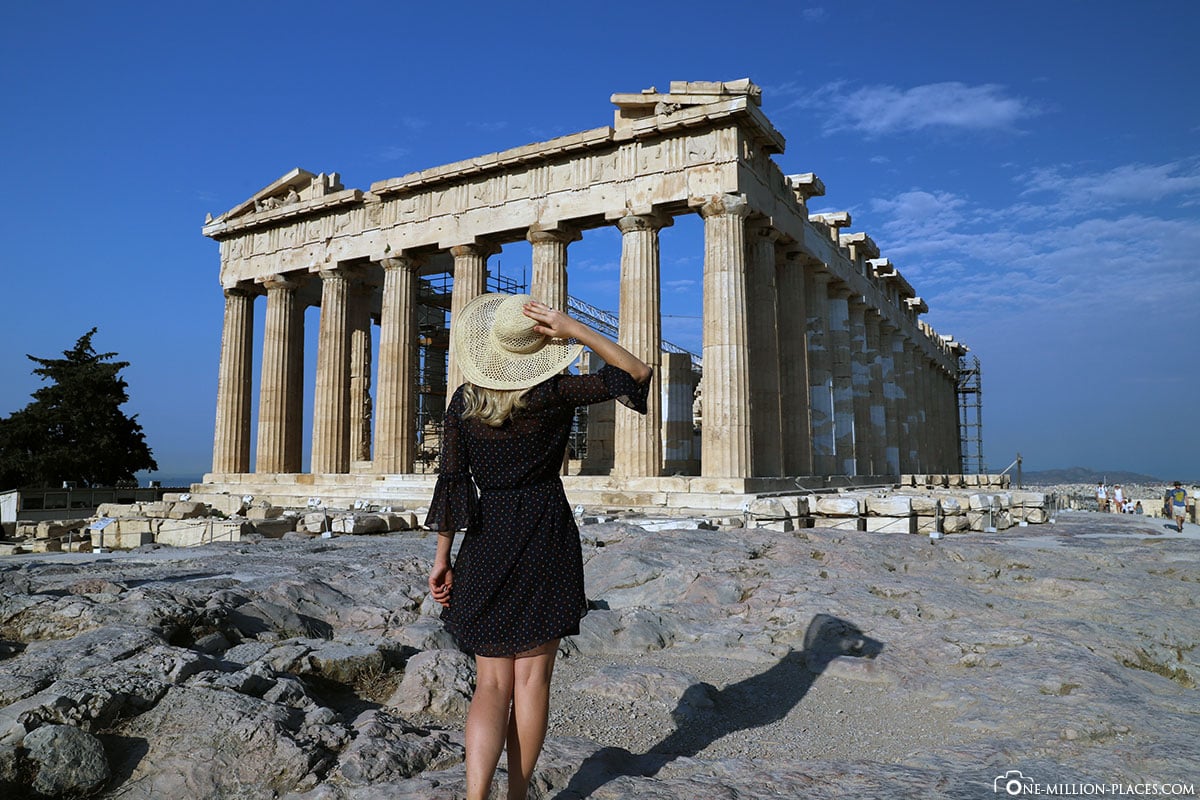 The Parthenon on the Athens Acropolis

Also on the upper plateau is the Erechtheion, which is mainly known for its small porch, which is carried by six larger-than-life girl figures (also known as caryatides). In order to protect the figures from weather influences, they were replaced by replicas at the end of the 20th century. The originals are now on display in the Acropolis Museum.

More impressions of the Acropolis

On the grounds of the Acropolis you will also find the Odeon of Herod Atticus – an ancient theatre with space for up to 5,000 spectators. Also great are the views from the Acropolis over the city, which you have in all directions. A little in the distance you can still see on the Muse Hill the Philopapposmonument, which was erected in honor of Gaius Iulius Antiochus Epiphanes Philopappus as well as the viewpoint Areopagus Hill.

Panoramic view of the Acropolis and the city of Athens

Our tip: To visit the Acropolis without crowds, it is worth a visit very early in the morning! We were about 30 minutes before the opening time at the lower main entrance in the city and were therefore the first to walk up the mountain that day. We really had the opportunity to photograph the Parthenon completely without any other visitors 🙂

Just 30 minutes later, things looked very different. Then slowly come the guided tours, especially from the cruise ships. Then it gets very crowded up here and on the paths very quickly! We had read that this relaxed a bit in the late afternoon. But here are a few pictures to get an impression of how full it can get up there.

Athens has several Starbucks stores and also its own cup 🙂

The Starbucks City Cup of Athens