Did you know that Greece consists of over 3,000 islands? 😲 That’s 82 percent of all the islands in the Mediterranean! These include islands, but also rocky islands, rocks and reefs, of which only a little more than 100 are inhabited. After 2 days to explore the sights of the capital Athens, our journey continued to Argostoli on the island of Kefalonia.

The fastest way to get from Athens to the island of Kefalonia, 280 kilometres away, is by plane. The flight with Olympic Air, a subsidiary of Aegean Airlines, takes just over 50 minutes. Kefalonia Airport “Anna Pollatou” is quite small and is served directly from Europe by several airlines and low-cost airlines, especially in the summer months.

Tip: Take an island map directly with you at the airport in the arrivals hall for better orientation. In the folding map you will also find city maps as well as sightseeing tips. Directly at the airport you will find many large car rental companies such as Hertz, Thrifty, Avis, Budget, Enterprise, Alamo or National. We had rented our car, a Seat Ibiza, via Hertz.

Over billiger-mietwagen.de, we’ve found offers for a rental car per day starting at 21 EUR. If, as we usually do, you want to have the “all-round carefree package” with all the important insurance sanbals, then – depending on the season – you usually get prices of about 50 EUR per day.

The roads on Kefalonia are all very well developed and we found that there wasn’t really a lot of traffic. So we got through it all over the place. The island is not very large overall – nevertheless, one should not underestimate the routes from one place to another. Through the many mountains, serpentines and small villages along the route, a trip from the north of the island (Fiskardo) to the south (scale) takes about 2 hours, although that is only about 75 kilometers.

Kefalonia Things to know about

– Kefalonia is the largest of the Ionian Islands and the sixth largest Greek island with 734.014 km2
– The island extends over a length of 48 kilometers and is a maximum of 30 kilometers wide
– Kefalonia has a population of about 40,000
– The most important place on the island is Argostoli, followed by Lixouri
– The highest elevation is Mount Enos at 1,628 meters above sea level
– The underground lake Melissani is one of the main attractions of the island
– Ferry connections to the islands of Ithaca, Zakynthos, Lefkada, Killini and Patras as well as to the Greek mainland
– In 1953 the island was hit by a major earthquake, which destroyed about 70 of the buildings
– The 1 km long, unspoilt white pebble beach of Myrtos Beach is one of the most beautiful beaches in Greece
– People live mainly from wine, olive growing, sheep farming, fishing and increasingly from (cruise) tourism 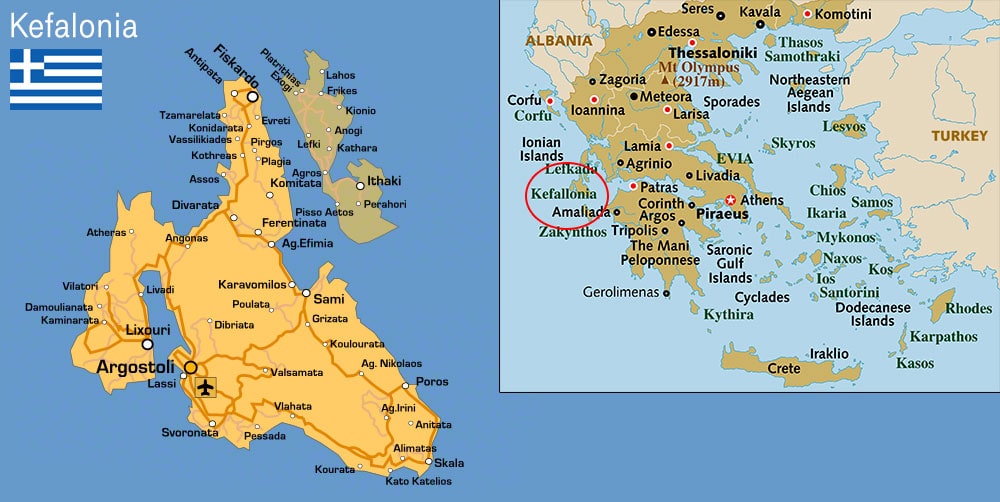 The island of Kefalonia in Greece

Our accommodation on Kefalonia was the Lassi Hotel, which is only about 10 minutes by car from the airport. The capital Argostoli is only 5 minutes away by car, so you can also walk here.

Just a few metres from the sea, this family-run hotel features a swimming pool, an indoor bar, a main building with hotel rooms and two outbuildings with apartments and studios. We stayed in the main building in a twin room and had a great view of the sea from our balcony. The room is very simply furnished, but there is a TV, air conditioning and a refrigerator. The bathroom was a bit small for our taste and also the shower was tiny and only separated with a curtain, so you had to be careful that you don’t put half the bath under water when showering. The WiFi is free of charge, but the connection was often very bad. Fortunately, in Greece – as the EU country – roaming is free of charge, so that you can also use the data volume of your mobile phone.

We really enjoyed the morning breakfast buffet. There was freshly squeezed orange juice, fresh fruit (watermelon, apples, bananas, grapes, etc.), cakes, muffins & doughnuts, hot things, cold cuts (sausage, cheese, feta cheese), cornflakes & muesli, bread and much more. And best of all, thanks to the huge terrace you can have breakfast outside. A perfect start to the day!

The sights of Argostoli

Argostoli has about 10,000 inhabitants and is the island capital of Kefalonia. The town is located on a promontory in the southwest of the island and is only about ten kilometers from Kefalonia airport. The city centre is quite compact and therefore easy to explore on your own. The cruise ships dock at the northern end of the city. When we were on Kefalonia, two ships were laid in one day: a Tui Mein Schiff 6 and an MSC. Cruise Ship Terminal is only about a 15-minute walk to the city centre.

The city centre of Argostoli is very compact. We explored the city in the late afternoon hours, so there was very little going on here. Our starting point was the city park “Napier Gardens”, which is however quite manageable. From here we continued to Vallianou Square, past the town hall to the beginning of the Lithostroto promenade, a small pedestrian and shopping street with cafes, restaurants, souvenir shops, small shops and the famous clock tower.

The turtles on the waterfront

Parallel to the pedestrian and shopping street Lithostroto is the newly created waterfront promenade. Also here you will find some restaurants and bars. The special thing here, however, are the sea turtles,which can often be observed directly on the waterfront. They eat here the seaweed and the corals that are located on the stones of the shore. The Wildlife Sense Kefalonia project protects the turtles on Kefalonia and examines the behaviour and nesting habits of the animals in eleven places. To do this, three morning surveyteams patrol daily and collect extensive data.

The De Bosset Bridge & the Obelisk

The De Bosset Stone Bridge, built in 1813, crosses the bay of Argostoli and is now only accessible to pedestrians. At 690 metres, it is one of the longest stone sea bridges and rises only a few metres out of the water. Around the middle of the bridge there is an obelisk on a small offshore island, which is supposed to remind of british patronage.

Passing from the city north of the cruise port, you will reach another attraction: the natural phenomenon Katavothres. The special thing about this place is that the sea water crosses the island “uphill” on about 17 kilometers underground and only appears after about 2 weeks at the other end of the island. Austrian researchers had discovered this in 1963 with the help of a dye that they poured into the water and which reappeared many days later as colored water at the other end of the island. The openings into which the seawater flows are called katavothres (slünde). The flow of water was formerly used to drive the water mill used to grind grain.

A few meters further on, at a headland, there is the classicist lighthouse Agios Theodoros, built in 1829 and destroyed in the severe earthquake in 1953. The lighthouse looks slightly different from the usual lighthouses due to its size alone. It is placed on rugged rocks and always has the entrance to the bay of Argostoli in view.

If you want to discover Kefalonia culinary, you should definitely visit the Chez Vassiliki cooking school. Chez Vassiliki is located on the lower slopes of Mount Aenos, in the small village of Karavados, which is only about 20 minutes away by car from Argostoli.

Our hosts Vassiliki and George welcomed us very warmly on the terrace of the property, from which one has a spectacular panoramic view over the Ionian Sea. As a welcome, there was first homemade lemonade before the preparations for dinner started.

We kneaded dough, cleaned vegetables, baked a cake, fried shrimpuntil we ended up with an excellent menu consisting of freshly baked bread, a Kefalonian Meat Pie, shrimps with Kefalonia feta cheese and lots of garlic, vegetables and an almond cake. It was very tasty! Two Airbnb guests from Vassiliki came to the table for the meal, so it was a very entertaining evening.

If you want to immerse yourself in the cuisine of Kefalonia and experience authentic, warm hospitality, Vassiliki is in the right place 🙂

Dinner at the Restaurant Sto Psito

On another evening we ended the day with a dinner at the restaurant Sto Psito. The restaurant is located only 10 minutes walk from our Hotel Lassi and offers a beautiful view of the sea from the restaurant terrace. Typical Greek we ordered as a starter homemade Zaziki with pita, for the main course there was fresh local fish and a kebab skewer.

A map with all the sights on Kefalonia

On the following Google Maps map we have mapped all the main sights on Kefalonia (Myrtos Beach, Melissani Cave, Drogarati Cave, Assos, Fiskardo, Ainos National Park and much more). The island is really great to explore with a rental car in two days.