After 3 wonderful days on the island of Kefalonia, our journey went back to the Greek mainland, because our destination was the town of Kalambaka in Thessaly. Here are the Meteora monasteries, a UNESCO World Heritage Sitethat we have always wanted to see 🙂

The ferry from Kefalonia to Kyllini

Around 7.30 in the morning we left our Hotel Lassi near Argostoli to be on the ferry in Poros on time at 9 a.m. Poros is located in the south-east of Kefalonia and offers a ferry connection to the Greek mainland for both travellers with and without a car. Arriving in Poros, we have already seen our ferry from Levante Ferries at the port, which should take us to Kyllini within 1.5 hours. In summer, the ferry commutes back and forth between Kefalonia and the mainland up to 5 times a day, making it the perfect means of transport.

On the ferry there are enough lounges where you can sit down and spend the time, shops for drinks and small snacks as well as outdoor areas. So the journey passed like in flight and we had already arrived in Kyllini at about 10.45 a.m.

The route from Kyllini to Meteora

When we went down from the ferry, after a short stop at the gas station we went straight on, because there was a 400 kilometer long route in front of us as far as Kalambaka. The journey initially went along the north coast of Peloponnese to the port city of Patras. Here we have crossed the majestic Rio Andirrio Bridge, which spans the Strait of Rio-Andirrio. Sometimes the bridge is also referred to as the Charilaos-Trikoupis Bridge. The cable-stayed bridge, supported by four pylons, is a total of 2,883 meters long and a really great photo motif. Unfortunately, the toll is a bit hefty and currently amounts to EUR 13.50 per car.

After the bridge we walked 260 kilometers along the relatively newly built highways 5 (Ionia Odos) and 2 (Egnatia Odos). Fortunately, there was very little traffic here, so we made very good progress. However, the motorway is subject to a toll, so that every few kilometres there are toll stations where you have to pay a toll. This is usually 2 to 3 EUR per section. The last part of our route went along the Greek national road 6 through the mountains of Thessaly until we finally arrived in Kalambaka. In total, it took us about 4.5 hours to complete the route.

Our Hotel Monastiri Guesthouse in Kalambaka

For two nights we stayed at Monastiri Guesthouse, which is located in the city of Kalambaka. The city has only about 12,000 inhabitants and is located at the foot of the Meteora monasteries. Together with the neighbouring village of Kastraki, it is considered a gateway to Meteora. There are countless restaurants, cafés and hotels and Meteora tourism is a huge source of income for the city.

Monastiri Guesthouse is a small owner-managed guest house located in a quiet area near Kalambaka Train Station, with great views of the Meteora Rocks. Dita, the owner and hostess, has always been very friendly and has always taken care of the needs of her guests. Free parking is available either in small numbers on the grounds of the guest house or directly on the street. The guest house consists of an old and new building complex and a beautiful pool behind the building. We stayed in the new building and therefore had a very new, modernly furnished twin room with air conditioning, refrigerator and balcony. In the older part of the building, however, the rooms are rather classically and typically furnished.

We enjoyed the breakfast, which is offered daily from 8 a.m. to 10 a.m. in the lobby. In addition to the usual breakfast items such as toast, cornflakes, etc., there are also many local and even homemade products, such as cakes or stuffed puff pastry. Just delicious 🙂

A map of Meteora

Now we had a good 2 days to explore the Meteora monasteries. For this we had 2 guided tours (Sunset Tour & Meteora Photo Tour) and of course we also went on our own with our rental car. To get a bit better in the area around Meteora, we have created a map with all the monasteries, the best viewpoints and other sights in Google Maps.

Our Sunset Tour with Visit Meteora

In the afternoon of our arrival in Kalambaka, the first thing we wanted was a Sunset Tour with Visit Meteora, which we had been looking forward to in advance.

For our Meteora Sunset Tour we were picked up by a minibus at our guesthouse around 4 p.m. About 20 guests were with us on the tour. Since Meteora is very crowded by tourists from all over the world during the day, the time before sunset is certainly one of the best to explore Meteora. While most tourists are already on their way back to the hotel, this tour is only just beginning. Perfect for us, because we don’t like crowded sights so much.

The tour promises the following highlights:

– You can see all 6 still inhabited monasteries, one of which can be visited from the inside
– You can see the renovated hermit monasteries of Badova
– Visit to the Byzantine Church Virgin Mary
– Learn about local history, myths and traditions
– The sunset can be seen from a beautiful viewpoint

The tour costs 35 EUR per person and takes about 4.5 hours.

A photo stop at all 6 monasteries

When we had collected all the guests at the accommodations in Kalambaka and Kastraki, we drove towards Meteora Rocks. The road winds further and further up between the rocks until you can see the first monasteries on the right and left. We drove off the road once completely to be able to see all the monasteries from viewpoints. Just great to finally see this live after Meteora was on our destination list for so long.

Incidentally, no entrance fee for Meteora is required. So you can look at all the monasteries – at least from the outside – completely free of charge and enjoy the insane views.

A visit to the monastery of St. Stephen

Since all monasteries have their closing days on different days and also have different opening hours on their open days, you should inform yourself in advance which monastery is open on which day and for how long. The monastery of St. Stephen is open the longest with a closing time of 5.30 p.m., so that the whole afternoon excursions stop here – as well as us. We were able to enter the monastery for an entrance fee of 3 EUR to look at it from the inside.

The monastery, founded in 1312, was initially a monastic monastery and until the 19th century more than 30 monks lived here. In 1960 it was almost deserted and was converted into a women’s monastery a year later. Today the monastery is inhabited by nuns, so you do not have access to all areas. However, you can visit a beautiful courtyard as well as a church and have a great view of the surroundings from a viewing platform.

Our next stop was remote, about 1,000-year-old hermit caves,located in the small valley of the Panagia on a less busy side of the Meteora monasteries. The valley stretches between two large rocks called Pixari and Amparia and other smaller rocks.

Our bus dropped us off on a gravel road, which we then continued on foot. On the right hand of the way we saw the monastery of St. Nicholas (Badovas), which was built into a cave. Crazy! The monastery is no longer open to the public, just like the monastery of Gios Andonus, just a few metres away. In the middle of the valley there is still an old chapel of the Panagia.

After we were back on the bus, our tour continued to Kalambaka to the Byzantine Church of the Assumption of the Virgin Mary, which took place between the 10. and 11th century was built on the ruins of an ancient Christian basilica. The church is worth a visit, because there are valuable Byzantine frescoes from the 11th century, but also due to the building material of their walls. Here, for example, relics of an ancient Greek temple are processed in the walls. Entrance to the church costs EUR 2 per person. Unfortunately, it is not allowed to take pictures indoors.

The photo spot at sunset

Shortly before sunset we made our way back to the Meteora Rocks. If you drive up Meteora Street and turn right at the 1st junction, you will pass two viewpoints on the right (“Sunset Rocks”). We stopped by bus at the second point to wait for the moment of the setting sun on the rocks in front. The sky slowly discolored and shrouded the landscape and monasteries in a beautiful light until the sun set behind Meteora. A nice conclusion to a great excursion! 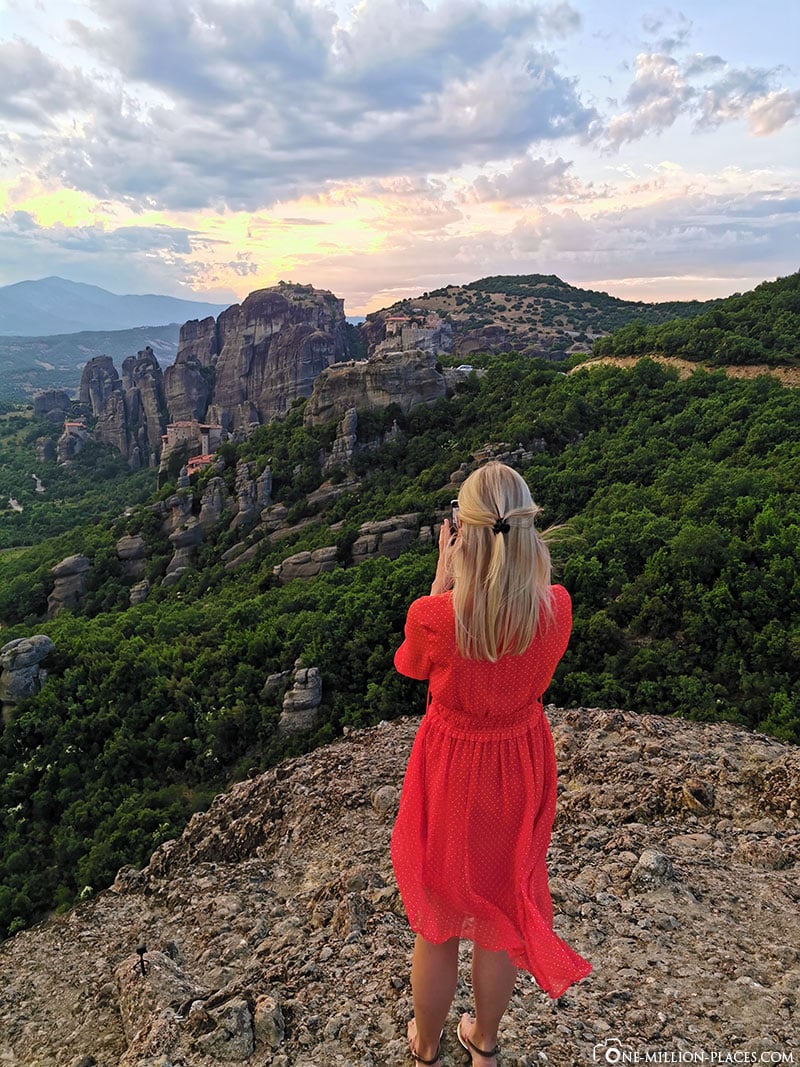 A great sunset over Meteora

Dinner at the Restaurant Valia Calda

Valia Calda is located on the lively Trikalon Street in the heart of Kalambaka, offering modern and creative Greek cuisine. At a delicious dinner in the open air we ended our first day in Meteora, which was full of experiences and new impressions.