After visiting the city of Bergen yesterday, our journey with AIDAsol tonight went further north along the Norwegian coast and then into the beautiful fjord landscape. On this day, a highlight of our Norway trip awaited us: the journey through the Geirangerfjord 🙂

The drive through the Sunnylvsfjord to Hellesylt

Around 8 o’clock in the morning we first arrived in Hellesylt, a small village with about 650 inhabitants, which is located at the beginning of the Sunnylvsfjord. AIDAsol has only moored at the pier for an hour in order to let a few excursion groups disembark, which were later “collected” again in Geiranger. We made ourselves comfortable in the time on the upper deck and enjoyed the view. From board you could see very well the most popular attraction of the small village: the waterfall Hellesyltfossen, which divides the place in half and is crossed by two bridges.

The journey through the Geirangerfjord (UNESCO World Heritage Site)

Just in time at 9 o’clock it was called “Leinen los” after the short stop. We had 20 kilometres of driving distance in front of us until we were to reach our second stop for today – Geiranger. After the first 5 kilometers we turn right into the Geirangerfjord, which is certainly one of the highlights of the route.

The Geirangerfjord is one of the most famous fjords in Norway and has been on the list of UNESCO World Heritage Sitessince 14 July 2005. The reason for the inclusion is, on the one hand, the symbiosis between the sea and the mountains and the associated unique natural diversity of the area, as well as the fact that the landscape is largely unaffected by human intervention.

The Geirangerfjord is about 15 kilometers long, in some places up to 1,300 meters wide, but sometimes narrowed to only a few hundred meters. In a zigzag, it winds its way between the sometimes extremely steeply sloping rocky slopes. On the steep slopes we have seen again and again individual farms that remind of earlier times. Meanwhile, many of the farms are deserted, the last farm was abandoned here in the 1960s. The farms used to be built in places that were safe from rock and snow avalanches. And there was another advantage: due to the mild climate, there was enough sunlight in the summer to maintain a high-yielding agriculture, in which even southern fruits could be harvested. Today, a great deal is being done to restore the farms and thus preserve them.

On the route along the Geirangerfjord we saw countless waterfalls, which sometimes had more and sometimes less water. The most famous waterfalls are “The Seven Sisters”, which unfortunately were not so well recognizable with us, because the waterfalls now in September simply don’t get enough water from the glacier. So it happens that in some cases you only see four sisters, i.e. four small waterfalls at the place. Directly opposite is the waterfall “Freier”. There is a beautiful legend about both waterfalls: each of the seven sisters was asked by a freeman if she wanted to marry him, which they all refused. He then grabbed the bottle and became an alcoholic. And if you look closely at the waterfall “Freier”, you can see that it has taken the form of a bottle 😉

At the end of the Geirangerfjord is the village of Geiranger, which we reached around 11 a.m. AIDAsol moored here on Reede and we were brought to the shore by tender boats.

Our private tour in Geiranger

Geiranger is the only place on the fjord of the same name and is therefore particularly frequented in the summer months. Thousands of tourists visit the small town with just 250 inhabitants every year – be it by motorhome, car or boat. It used to look a bit different here when there was no road and the ferry service didn’t exist yet – the residents lived very isolated. From 1858 there were first weekly connections with a steamship, from 1861 a road and in 1885 the first hotels, so that tourism slowly but steadily developed.

For today we had a private tour with a taxito be able to see the beauties of the landscape in peace. This private tour was organized for us by AIDA, has GEIPC4_DBL the code, and can be booked or requested here. And you don’t believe how big our eyes got when suddenly a Tesla with a driver stood in front of us. How cool, we’ve never sat in a Tesla 🙂 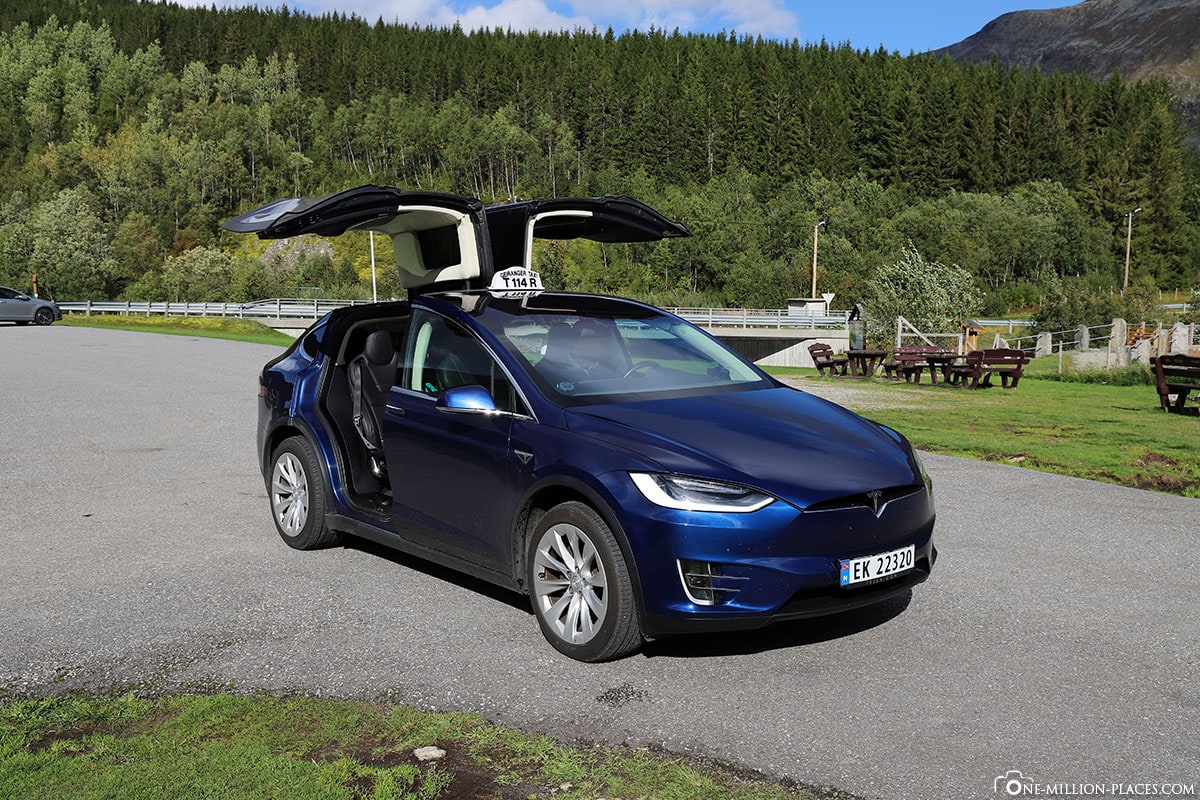 A Tesla Taxi, our car for a private tour in the Geirangerfjord

However, it is not so surprising that an electric car is picking up us here in Norway, because Norway is definitely leading the way in terms of electromobility. About one in three new cars sold here is an electric vehicle! Why is this so? Norway provides many financial advantages for the drivers of an electric car: VAT, import tax and part of the car tax are eliminated, so an electric car is usually cheaper to buy than a car with an internal combustion engine. Furthermore, the network of charging stations in Norway is very well developed. And there are even communities where you can park for free with an electric car, charge it for free and also don’t have to pay tolls. There is, of course, also a reason for the massive support of the Norwegian state: only in this way can the ambitious target of no more cars with internal combustion engines be registered by 2025.

So we quietly set off with our Tesla for our trip today. From the car we always had great views of the landscape, some streams, abandoned farms or even the mountains with the imposing glaciers. Here on the main road 63 there is also an old part of the original road through the mountains. The road construction that can be found here is called “Knuten”,which still stands exactly as it was built in 1882. Here, the road makes a 270-degree loop to soften the slope of the road. You can still drive this piece of road for a long time, as it was left standing as a kind of attraction – even after the construction of the new road.

Our first stop was the flydalsjuvet observation deck, which can be reached via the serpentine road from the village within about 4 kilometres. The viewpoint is divided into two areas: an upper plateau and a lower plateau. On the upper plateau all the excursion buses stop, on the lower one only cars are allowed to park. This of course had a huge advantage, because the lower parking lot was completely empty when we arrived here. Upstairs, on the other hand, was the first excursion bus with about 50 people. Lucky! So we had time to enjoy the view – on Geiranger, the Geirangerfjord and of course our cruise ship AIDAsol. By the way, on the day we were here in Geiranger, AIDA was the only cruise ship that docked here. And only because it was just before the end of the season. In the high phase, four to five cruise ships often dock here. You can’t imagine what the viewing platforms here look like when suddenly 10,000 people disembark.

A beautiful photo motif is also the installation “Fjordsetet”, a wooden seat, which was inaugurated by Queen Sonja in 2003. At first glance, it is not completely visible when you are standing in the parking lot. You just have to walk right down a path and then get to the seat. That kind of looks cool. The perfect place for a little break. Who would like to sit here? 🙂

The scenery and the view is simply magnificent❤ 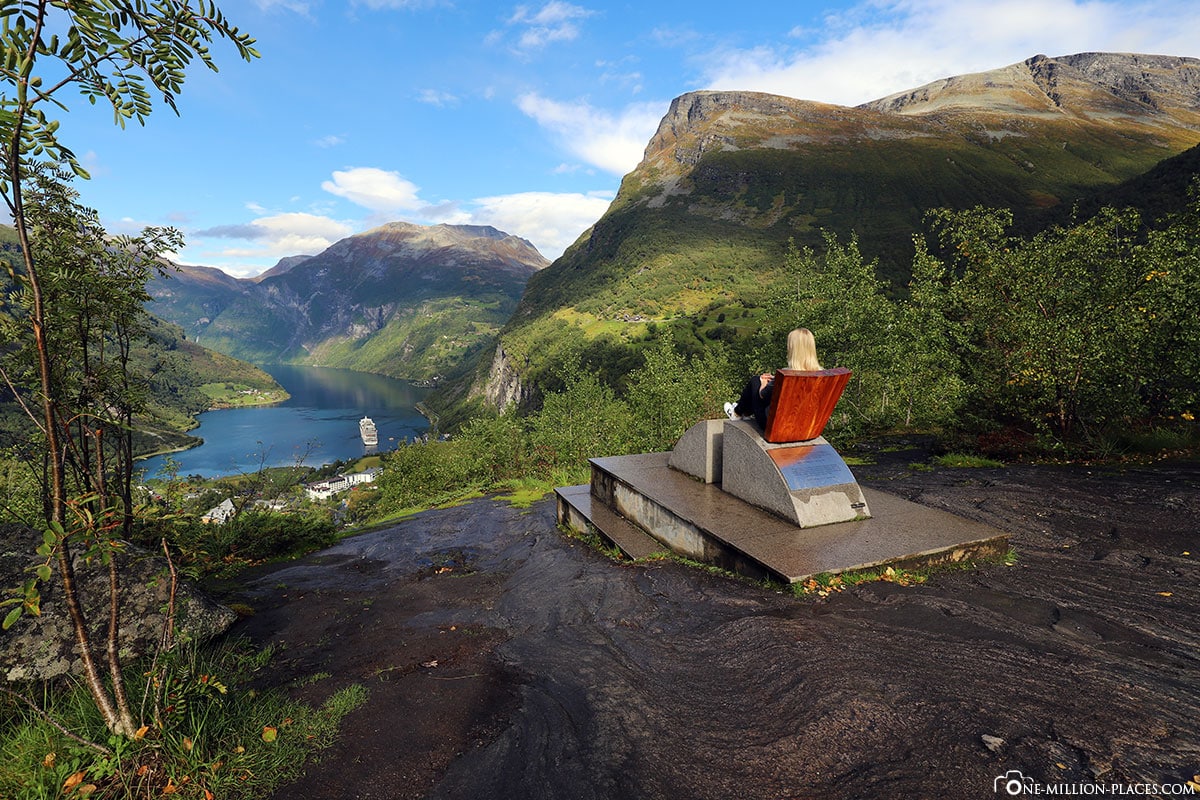 The view from Flydalsjuvet to the Geirangerfjord

On the way up along the panoramic road we passed the lake Djupvatnet, which is located at an altitude of 1,016 meters. The blue green shimmering mountain lake is fed by another lake as well as numerous meltwater streams. In the surrounding mountains you can also see some many glaciers, whose “eternal” ice shimmers partly blue in the sun.

On the north shore of the lake, the private nibbevegen toll road branches off, which leads up to the Dalsnibba. The road is usually only open in the months from June to October and completely closed in winter. After driving the 4.5 km long toll road, we arrived at the top of a large parking lot on the summit of Dalsnibba. The “Geiranger Skywalk” viewpoint is located at an altitude of 1,476 meters and is the highest point in Norway that can be reached by road. At cold 5 degrees outside temperature but with bright sun we enjoyed the view of the mountains, the valley and the Geirangerfjord 7 km away. Simply beautiful!

Another attraction of the day was the trip on the 8 km long Adlerstraße, on which you have to overcome eleven hairpin bends with up to 10 inclines, until you arrive at the top serpentine – the eagle turn. From the observation deck you have a fantastic panoramic view of the surrounding mountains, the Geirangerfjord, the village of Geiranger and the waterfalls. And the weather was great – it was cool, but the sun showed its best side.

After a short stop we drove a little further down the road to Lake Eidsvatnet.

We had some time until we dropped off, so that our driver dropped us off after about 4 hours at the Fjordcenter, which is located above the village in Geiranger. From here we walked along the hiking trail “Fossevandring” directly at the storfossen waterfall. The path consists mainly of a steel staircase with 327 steps and always offers beautiful viewpoints. The trail comes out at the campsite, where only five campers stood today. In the high season you don’t find a single empty spot here, we let ourselves be told.

The swing in Geiranger

A highlight is a little away from the waterfall – a totally cool swinghanging from a tree. We dared and had a great view of the fjord and our cruise ship from the swing. A really unique perspective and it was also incredibly fun. And here is a tip for the path, because the swing is not signposted: If you start from the fjord center, you automatically cross a road before continuing the stairway. On this road you just walk left and then after about 200 meters on the right side you can see the swing 😉

We have drawn the way to the swing in Geiranger here on a map. Update 2020: We have already read in several reports that the swing is probably sometimes pulled up and therefore not reachable. Unfortunately, we do not know why this is the case. If someone has an update on this, please write it to us in the comments below.

It was a really great day in Geiranger. Our next destination tomorrow morning is the 🙂 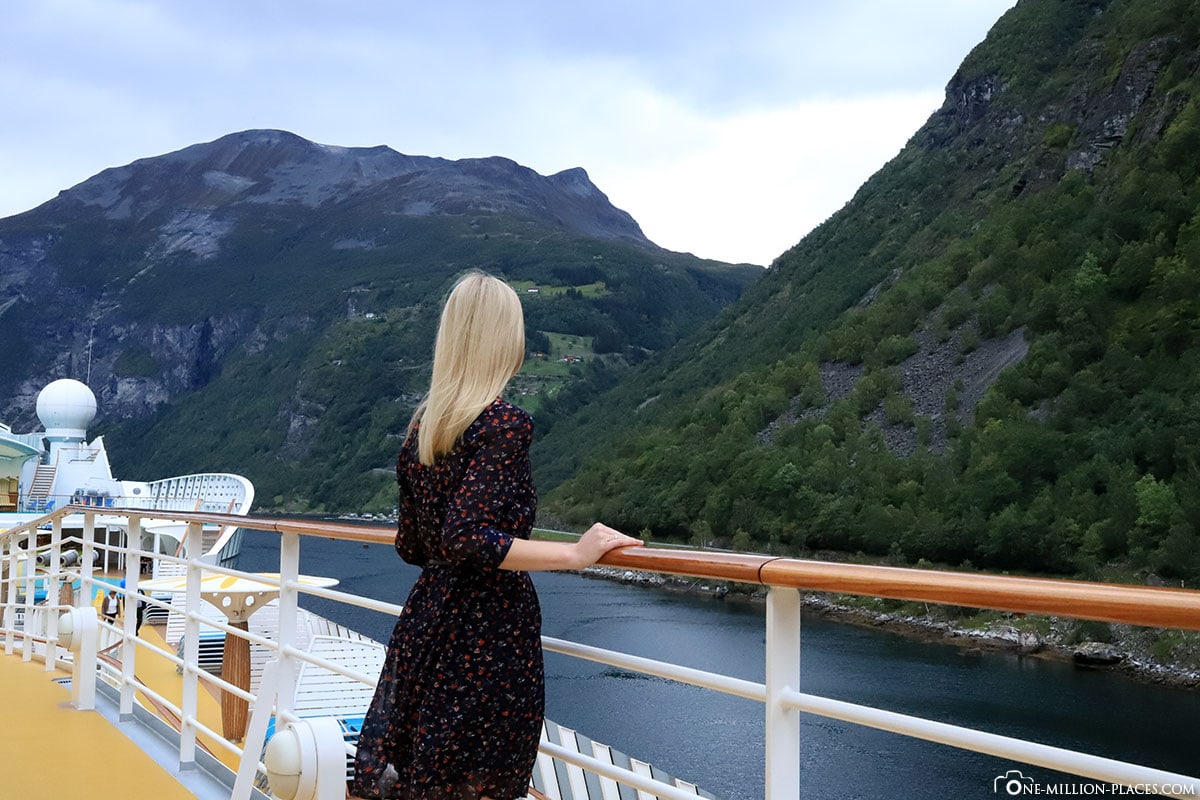 View from the ship to the Geirangerfjord