After we had explored the city of Trondheim yesterday in really great weather by kayak and also on foot on our own, our trip with AIDAsol went today to Alesund.

Things to know about Alesund

Alesund is a town in the province of Mére og Romsdal on the European North Sea in Norway. The urban area is spread over several islands, such as Hessa in the west, Aspy in the middle and Nérvéy in the east.

In 1904, almost the entire city centre of Alesund was destroyed by a fire and then rebuilt in Art Nouveau style. The buildings with their colourful facades, the many turrets and spires date from this period. During the reconstruction of the city, new houses could only be built of stone, because wooden houses could be set on fire too quickly. The city also has a lot to offer culturally: the city has several museums such as the Art Nouveau Centre in the Swan Pharmacy, the Museum of Urban History, the Sunnmére Open Air Museum, a large aquarium and a fishing museum. Fishing is an important trade for Alesund, not least because of the port’s favourable location. The city is also known for its dry fish, which is exported worldwide and is a very popular snack among Norwegians.

The AIDA Port Info of Alesund

With the cable car to the mountain Stranda

For today’s day in Alesund we decided for the excursion “ALE12: With the cable car to the mountain Stranda” by AIDA. By bus we went from the port first a little bit through ilesund and then on the road 60 to the ferry pier “Sykkylven – Magerholm”. Here we took the complete bus to the ferry, which took us to the other side of the fjord in just over 15 minutes. From here we went a little further towards Stranda to the valley station of the mountain railway Strandafjellet.

Stranda is the largest ski area in the Sunnmérs Alps and only in a few places in Europe more snow falls than here: on average eight meters per year. The mountains of Sunnmére, often referred to as “the Alps of Sunnmére”, are famous for the great powder snow and the steep slopes that often reach down to the fjords.

With the cable car (Stranda Fjord Gondola), which opened in 2012, we went up to the mountain station, which is located at an altitude of 1,067 meters.

“The 360-degree views of the fjords and the magnificent peaks of the alps is enough to take anyone’s breath away”
( strandafjellet.no

Arriving at the top, the area around the mountain station looked relatively barren. But, and this was also the reason for our visit, you have a magnificent view of the surrounding mountains and the fjord landscape from up here. Just below the mountain station is also the small “Fjord Panorama Restaurant”. However, it was also very cold up here, rainy and very windy. So you should definitely pack yourself warm. 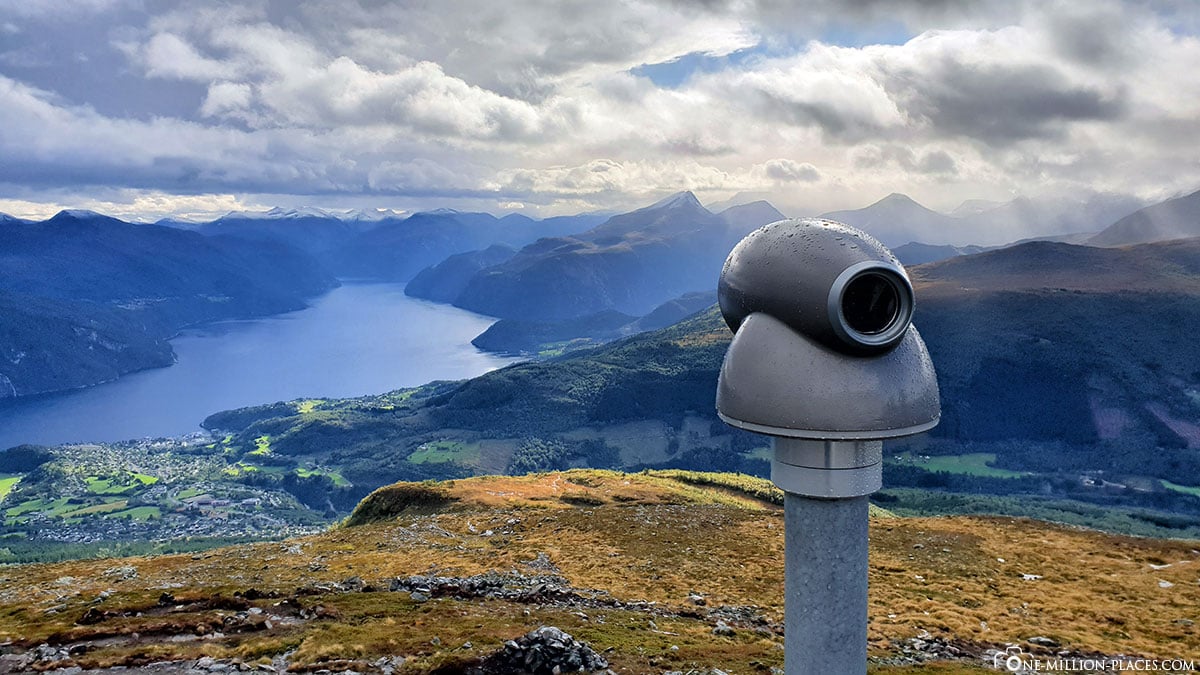 The view from Mount Stranda

After about 30 minutes of stay on the mountain, we took the cable car back on the way back and took the bus back to the town of Ilesund.

Panoramic view of Mount Stranda on the Storfjord

But before we went back to the ship, we made a short stop at the local mountain of Ilesund. From Mount Aksla, with its Fjellstua and Kniven viewpoints, you have a fantastic panoramic view of the port city, which stretches over three islands, the sea and the Sunnmére Alps. If you want to climb the Stadtberg on foot, you can do so from the city park: Here 418 steps lead to the top.