After we had a rather rainy day yesterday in Molde, Today Trondheim awaited us with a really great weather for mid-September: Blue sky, few clouds, lots of sun and pleasant temperatures 🙂

Things to know about Trondheim

Trondheim is the third largest city in Norway after Oslo and Bergen. In 997, the town was founded under the name of the town of Nisaress (‘estuary’). The name refers to the location of the town on the River Nidelva and its confluence with the Trondheimfjord. Trondheim is historically the most important city in Norway, was the first capital of the Norwegian Empire and the seat of the archbishop.

Trondheim is the centre for retail and public administration throughout central Norway. With the international airport, with rail connections to Oslo, Bodo and Sweden and as a pier for the hurtigruten ships, the city is also an important transport hub for the whole northern part of Norway. Today, more than 30,000 students live in the city alone. The university, several universities and research institutes make Trondheim one of the most important research and study locations in Scandinavia.

The AIDA Port Info of Trondheim

Kayaking on the Nidelva River through Trondheim

For our morning in Trondheim we decided for the AIDA excursion “THM10: Kayak tour on the river Nidelva”. We have been kayaking several times in the past, e.g. in Halong Bay in Vietnam, in the Amazon or in the Spreewald. First there was a short briefing by the AIDA tour guide and then we could practice paddling a little in the small harbour basin. In total our group consisted of 10 people plus guide, so we were on the way with 6 kayaks.

After leaving the small canal basin we went under a bridge to the river Nidelva, past the old canal harbour towards the city center.

On the following map we have drawn the route of our kayak tour: 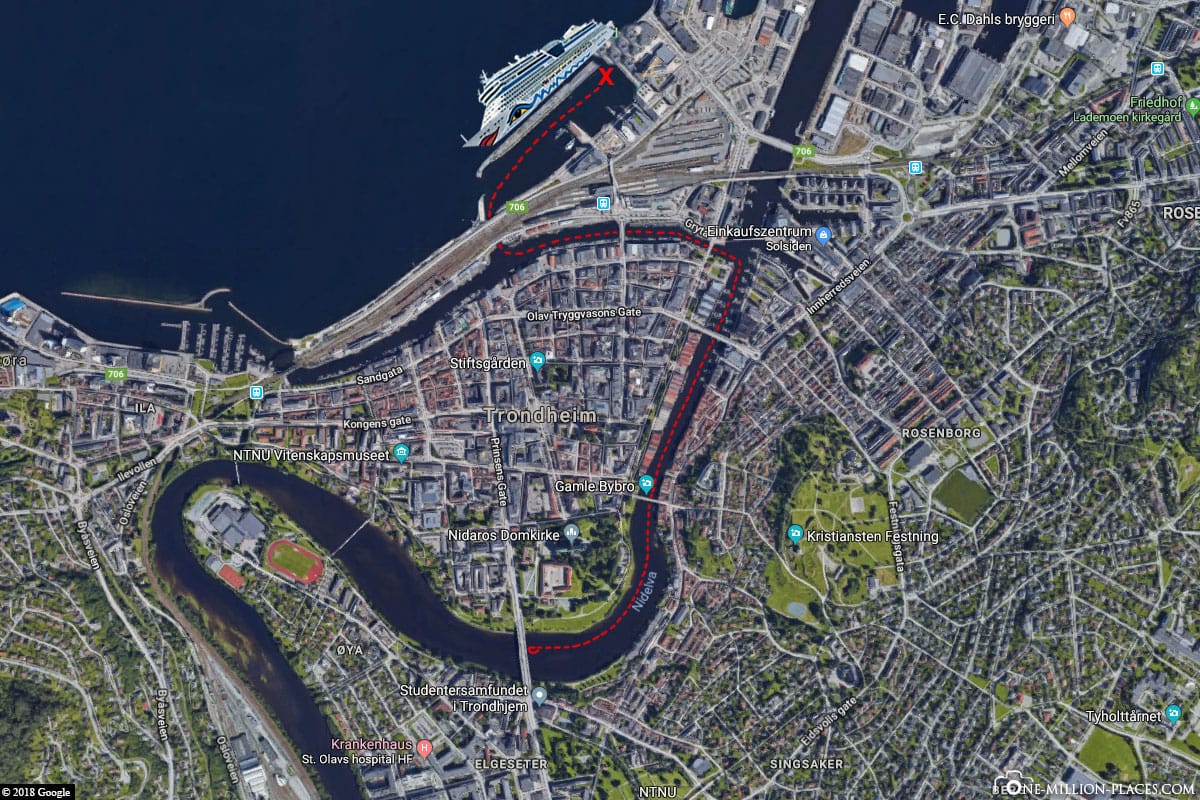 The route of the kayak tour with AIDA in Trondheim

Since we first drove upstream, we had to fight with some counter-current, but overall this is a very quiet and safe ride without waves. It was also great that there was no heavy traffic on the river despite the weekend. Apart from another group of kayakers, an excursion boat and 3 standup paddlers, we were the only ones who were on the road here 🙂

The highlight on the route are certainly the many colorful storage houses,which are located to the left and right of the river Nidelva, as well as the underpass of the old city bridge Gamle Bybro, where we had many spectators. From here we went a little further upstream, past the Nidaros Dom and the archbishop’s palace up to the Elgeseter Bridge. Here we took a short rest before we slowly made our way back. And now also with the current 🙂

We were really lucky with the weather this morning. Shortly after we were back on the ship with our kayaks, a short but violent storm was brought up. So we quickly brought all the kayaks to safety and then we got back on board AIDAsol, moved and had lunch in the market restaurant. This short break was great, because a short time later Trondheim was waiting for us again with great weather… perfect for our subsequent walk through the city 🙂

Explore Trondheim on your own

You can explore Trondheim really ideal and very easy on your own,as all sights are very centrally located and therefore within walking distance.

One of the most important sacred buildings in Norway is the Nidaros Cathedral, which is considered a national sanctuary in Norway. Until 1906, all coronation ceremonies of the kings took place here. After the Norwegian Parliament abolished the coronation ceremony in 1908, the blessing of the king has been taking place in NidarosDom.

The history of the church dates back to the 11th century. At that time, a small wooden chapel was built above the tomb of King Olav Haraldsson, which was later replaced by a stone church. In 1152, a large cathedral modelled on Western Europe began to be built, which was essentially completed in 1320. Although the main facade was not yet fully decorated and the towers lacked the top structure, the church was protected from weather conditions in the state. Since that time, the Nidarosdom survived several fires and storms, and has been extensively restored and expanded several times. The reconstruction of the Nidaros Cathedral was not officially completed until 2001.

The building looks very powerful from the outside. We really had trouble getting the whole structure in one photo – only the wide angle lens helped 😉 We would have liked to have looked at the cathedral from the inside. But since an entrance fee is demanded for this and we had forgotten our purse on the ship, we could not go to the cathedral church.

According to history, the picturesque wooden bridge is supposed to bring happiness to visitors and is therefore also called the ‘portal of happiness’.

The colourful storage houses in Trondheim

Between the old city bridge and the Bakke Bridge, on the eastern side of the river, is one of Trondheim’s most beautiful neighbourhoods: the storage town of Bakklandet. On the banks of the Nidelva, colourfully painted pile wooden houses from the 18th and 19th century, which used to serve as storage and storage houses. The first storage facilities were built here 1,000 years ago.

In addition to narrow streets and a few sweet cafés and bars, there is also a small promenade right on the river, from which you have a beautiful view of the storage houses on the opposite side of the river.

The Kristiansten Fortress is located on a hill in the eastern part of the city and offers spectacular views of Trondheim, the fjord and the mountains. It was built after a fire in the years 1681 to 1685 to protect the city from attacks from the east. The fortress saved the city when Swedish forces besieged Trondheim in 1718. Nearly a hundred years later, the fortress was decommissioned by King Charles XIV John and now serves as a fortress monument and museum. Until May 2019, a sculpture exhibition by the artist Laura Ford will be located on the outside of the fortress.

South of the Nidaros Cathedral is the archdiocese palace, a medieval stone building where the archbishops once lived. One of the largest wooden buildings in Scandinavia is Stiftsgérden, which is located in the centre of Trondheim. This is where the royal family resides when they visit the city. The canal port is located near the station and borders the inner city peninsula to the north. Here, too, you will find a lot of colourful wooden warehouses right on the water, which give a beautiful photo motif.

Unfortunately, we could not see much of Trondheim’s market square and the statue of the city’s founder Olav I Tryggvason during our visit, as the square is being redesigned and was a total construction site. Next to the old drawbridge Gamle Bybro is the first bicycle lift in the world, which was opened here in 1993. We have watched for a while how the cyclists can be pulled up the hill here. This is apparently not so easy and needs some practice. Still somehow a very cool invention.

A map of the sights in Trondheim

A map with all the sights of Trondheim we have created here on Google Maps.

With a total of eight different restaurants, AIDAsol has a really great variety for culinary catering. Tonight we decided to have dinner at Buffalo Steak House. As the name suggests, you have a wide selection of first-class meat: American Beef, American Bison or Dry-Aged Irish Hereford. But of course you also get a selection of salads or fish dishes. The food has tasted incredibly good and we can definitely recommend a visit.

After Trondheim was the northernmost point of our cruise with AIDAsol through Norway’s fjords, from now on it goes south again along the coast. Next stop tomorrow is then the port city of Ilesund.

The Starbucks City Cup of Trondheim