For today we had planned to explore Casela Park. When we arrived at the airport in Mauritius, we saw a beautiful display from the park directly on the baggage belt, which had aroused our interest 🙂

Things to know about the park

Casela Park was opened at the end of 1979 as a pure bird park or bird sanctuary. Over the years, the park has evolved into a nature reserve, which today offers its visitors not only the animal encounters but also a lot of other leisure activities. The 4,500-hectare park is home to two of the island’s longest rivers, the Rempart River and the Tamarin River, and a home for both native and exotic species. The focus is still on the birds – at least 1,500 live here. Among the 140 different bird species, one also finds very rare species, such as the Mauritius pigeon or the Mauritius kestrel.

In addition, you can also do some adventurous things on the extensive grounds, such as safaris, interactions with animals, ziplining, Segway and quad tours or a ride on the summer toboggan run. The zoo is an accredited member of the Pan-African Association of Zoos and Aquaria (PAAZA) and is committed to the protection and conservation of endangered species. Exchanges with other parks and zoos around the world are also regularly held. In 2015, for example, two hippos from the Czech Republic and Greece came to the park, as well as two white rhinos from South Africa.

Casela Park is located in the west of Mauritius, about 30 minutes south of Port Luis and 30 minutes north of the Le Morne Peninsula. The park is located directly on the main road A3, so that it is not to be missed.

The zoo is open daily from 9 a.m. to 5 p.m. We were there just early in the morning shortly after opening to go to the park before the tourist rush and take full advantage of the day. Directly in front of the entrance building there is a large car park where you can park your car free of charge. When we entered the entrance building, there wasn’t that much going on. Initially, a bag check took place, as normally no drinks or food are allowed in the park. The exception is a bottle of water. We had them with us, but also Cola and a few snacks. Since no one noticed it during the inspection, we got away with it 😉

At the checkout you can choose between different activities. It depends a little bit on what you want to experience and how high the adrenaline kick should be. By the way, it is worth buying the tickets online on the homepage of the park in advance, as you get 10 discount here. The normal ticket costs 850 rupees (about 22 euros) and includes a safari bus tour (to see zebras, ostriches, rhinos, impalas and wildebeest), a petting zoo, sighting of giraffes, hippos, camel sands, llamas, predatory cats, monkeys and turtles, and trips to the Tulawaka Gold Coaster.

You can then purchase various interactions or activities to your ticket:

If you are interested in several activities, it may also be worth booking a package in which the entrance fee and various interactions are already included.

We had the normal ticket and also the giraffe feeding, which we were especially looking forward to.

A map of Casela Park

Here you can see a nice overview map of the park. The park is very spacious and it is recommended that you take all day to explore the park in peace. If you are there directly at 9 o’clock in the morning, you have 8 hours until the park closes its doors at 5 p.m. 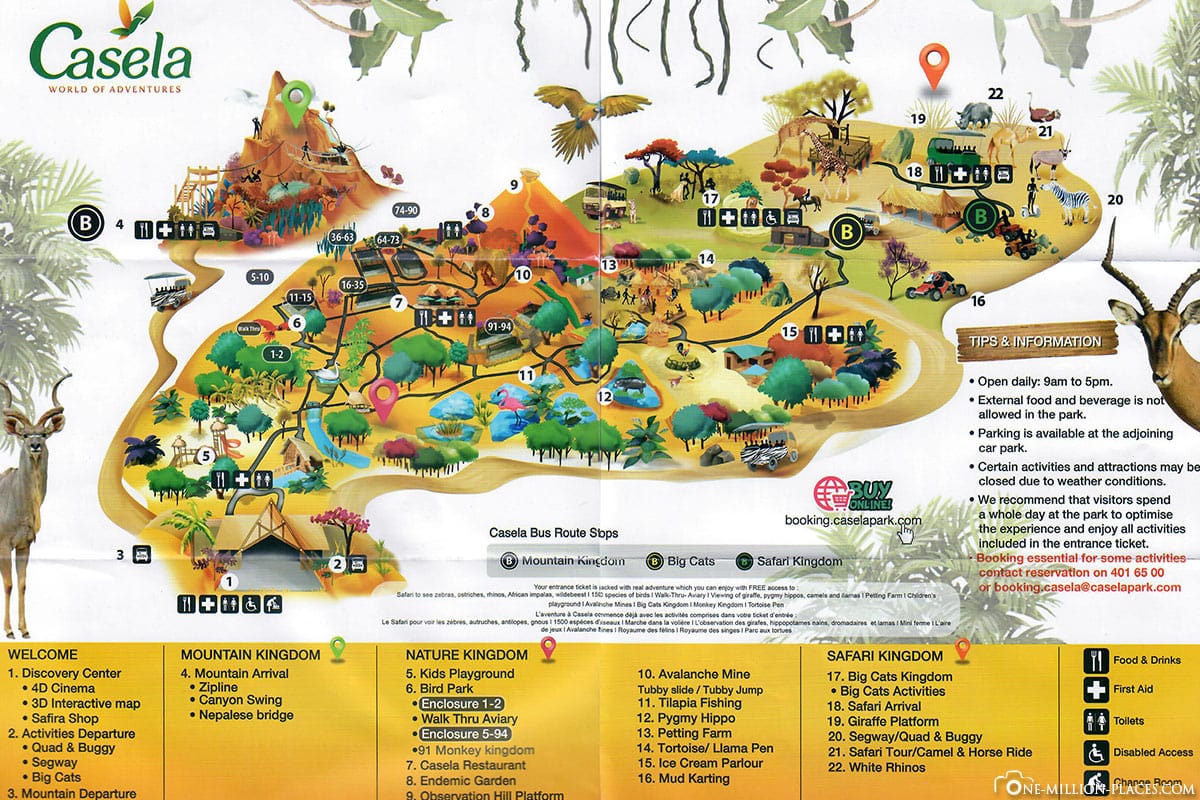 An overview map of Casela Park

A large map can be downloaded here or visit the interactive map on the Casela Park website.

The area at the entrance of the park is called Nature Kingdom. If you walk the first meters inside the park, you will pass a children’s playground. Then comes a large area with several bird aviaries and a bird enclosure through which you can pass through and the birds fly around you. Most interesting ly we found the bats that “hung out” in their cage:) The park is beautifully landscaped here, very natural and green with many endemic plant species. Next to the Casela restaurant we walked down the hill a little bit and passed the monkey enclosure.

Next you come to the Middle Kingdom. Here we wanted to look at the hippos first, but we couldn’t see any. Totally a pity. We were at the enclosure a little later, but couldn’t find one again. The petting zoo was our little highlight in the park. Here you could really get to grips with different animals: be it with the little sweet goats, rabbits, guinea pigs, horses, pigs, roe deer and others. Touching and caressing is absolutely allowed here 🙂

The enclosure of giant tortoises

The open and spacious grounds of the Aldabra giant tortoises are located directly after the petting zoo. It is a great experience to be able to see these animals up close and to be able to touch them. We really liked that and we could have stayed here forever.

In Casela Park, the Tulawaka Gold Coaster is a kind of summer toboggan run, the use of which is included in every ticket – and as often as you like. So there was also a small queue, which quickly disintegrated. We rode in a sleigh together, which was incredibly fun. 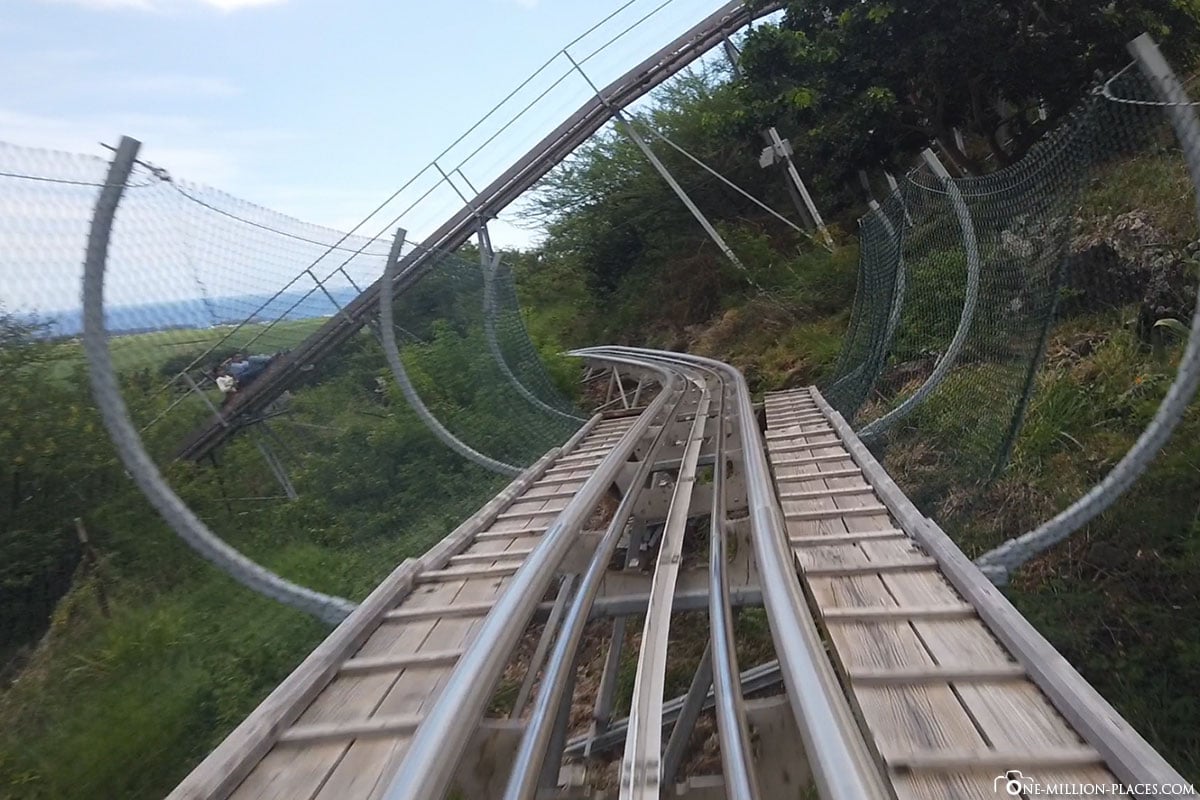 In the Big Cats Kingdom you will find the big, elegant predatory cats … from lions to cheetahs to caracals. Really beautiful animals, but we have to admit that we didn’t like the enclosures at all. If you stand outside the enclosure, you can only see fence – sometimes even a double fence, which has made the view of the animals very difficult. Well again we found the viewing platforms, from which one could then look down on the respective enclosures and thus could see a bit more of the animals.

We went to the Safari Kingdom with a shuttle bus, which left right in front of the Big Cats Kingdom. When we got there, we ran straight to the giraffes, because we really wanted to redeem our interaction here. So nothing like up on the platform. Here you can also buy small food packages directly on site, with which you can feed the giraffes in a separately defined area. We already had the ticket, so we could go directly into the feeding area with our feed bag. Two giraffes stood here and waited for our little treats. We each had a bag so we could feed and caress the two giraffes for a while. This was a really cool experience and with 200 rupees (about 5 euros) is not so expensive and highly recommended.

One of the highlights at Casela Park is the safari. Here you can take a safari bus for about 30 minutes through an otherwise inaccessible, very wide area, in which different animals are located. So you go on a game drive and try to find and observe animals. After the bus has slowly driven along the gravel roads, we have already seen the first impalas on the left and on the right. A little later we saw the first ostriches, some of which were also really close to our bus. The highlight was the zebras, who had initially stayed at some quad squads that had stopped for the animals. Later they also came to us on the bus and we could observe them really close. Totally cool 🙂

The journey continued through another gate into another, cordoned-off enclosure. Here we could observe from afar the two rhinos that live here. Unfortunately, they were very far away, so it was very difficult to see them.

Our conclusion to Casela Park

Casela Park is a very spacious park where you can easily spend a whole day, as there is a lot to see and do. We really liked the petting enclosure, the area of the turtles and the feeding of the giraffes. On the other hand, we did not find the bleak aviary of the birds and the cage for the monkeys very nice. The enclosures of the predatory cats are somewhat wide, but the view of the lions is “barricaded” by a double fence. There are viewing platforms, but these double-fenced open-air enclosures somehow look like a prison. Here we would have found it more beautiful if there were natural boundaries of the enclosures, as has been implemented in many zoos by now. This would also fit better into this magnificent landscape of the park.