We love waterfalls ♥ Whether very small, really high or the breathtakingly large waterfalls of Iguazu in South America or the Victoria Falls in Africa. But do you already know the “waterfall” that is in the sea? There is something like that only in Mauritius and that is really spectacular!

Where is the underwater waterfall in Mauritius?

The underwater waterfall of Mauritius is located about 800 meters from the southwestern tip of the island, just below the famous mountain Le Morne Brabant. If you don’t trust the pictures, you can even admire this natural phenomenon on the satellite images of Google Maps.

What is an underwater waterfall anyway?

According to Wikipedia, a waterfall is the section of a flowing water (river, stream) where the current passes at least partially into free fall due to the formation of the rock subsoil. So far, so good. But how can there be a waterfall in the sea?

Off the coast of Mauritius, however, this seems to be the case. Here you will find an incredible and worldwide unique natural phenomenon – the mysterious underwater waterfall. Viewed from the air, it appears as if masses of water in the sea are falling into the depths. But all this is a perfect illusion,an optical illusion.

Mauritius is geographically located on a rocky base that abruptly descends to greater sea depths. On the one hand, this gives the beautiful contrasting view of a bright turquoise sea, which later turns into a deep blue. On the other hand, powerful currents are resulting, which are so strong especially off the southwest coast of Mauritius that they wash away the bright sand from the coast and pull down beyond the edge of the base into the deeper regions of the ocean. This downward flowing sand created from the air looks at the deceptively real – and breathtakingly beautiful – illusion of a waterfall under the sea surface. Contrary to what it looks like for the human eye, here off Mauritius, not masses of water, but sand masses plunge into the depths. So it’s actually more of an underwater sandfall 🙂

The Le Morne Peninsula of Mauritius with the underwater waterfall

What is the best way to see the natural phenomenon?

The underwater waterfall of Mauritius can unfortunately only be admired from the air. From the beach we could only see the gently breaking waves, and thus guess where the reef and the waterfall are located. Unfortunately, you can’t see the illusion of the beach. Even from the 500-metre-high summit of the mountain Le Morne Brabant, on which we made a hike, one can see the reef, the lagoon and the location of the underwater waterfall, but here too one sees very little of the optical illusion. 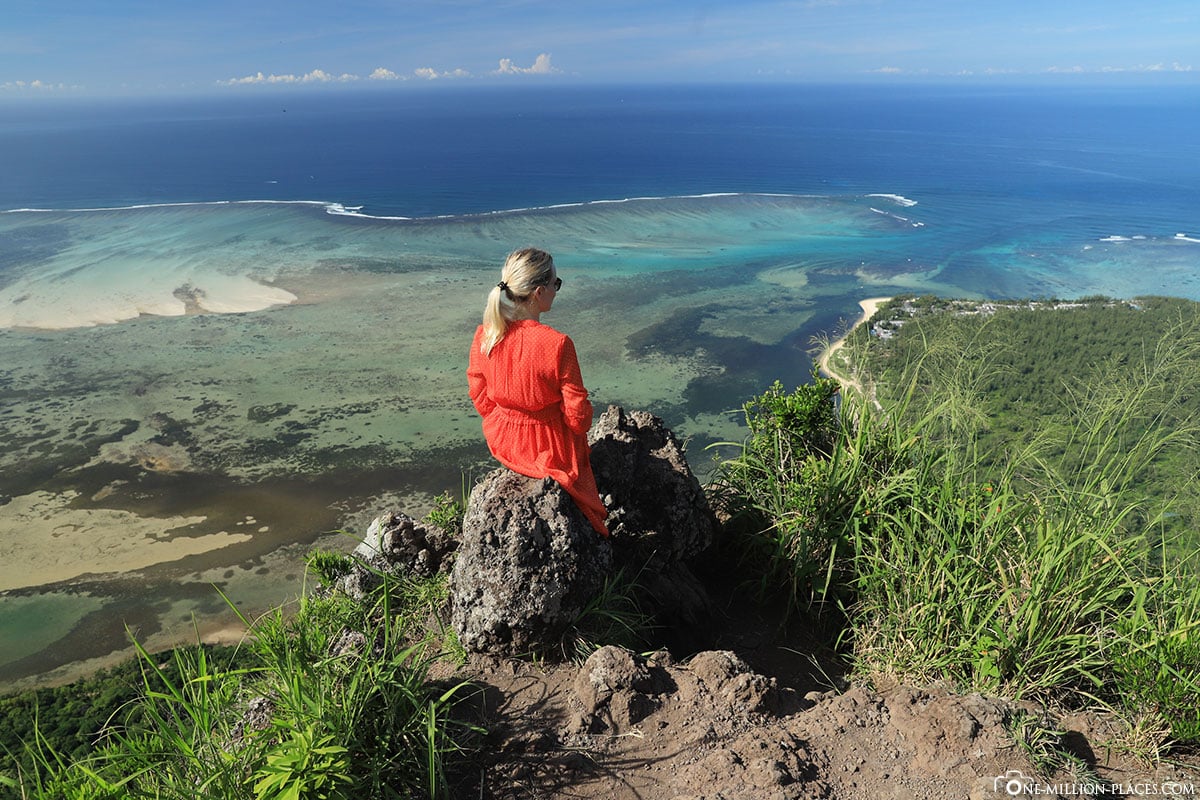 The view from Le Morne to the underwater waterfall

If you want to see this unique sight with your own eyes, you have to take a sightseeing flight over Mauritius. For this purpose, there are various providers, which offer different exploration tours either by helicopter or by seaplane.

A sightseeing flight by helicopter

Most of the sightseeing flights over Mauritius are certainly made by helicopter. For example, there is the provider Air Mauritius, where a flight over the waterfall for 2 people costs 16,000 Mauritius Rupee (MUR), i.e. just over 400 €. However, this price only applies to departures from a southern point of the island. If you want to start your sightseeing flight from the international airport, you pay 27,000 MUR (approx. 685 €) because of the longer flight time. It gets really expensive, who wants to fly from the north of the island to the underwater waterfall – here the price is then a proud 38,000 MUR – just under 960 €!

A 30-minute heli tour with helicopters Mauritius currently costs €630 and can be customized (if we understand correctly) for this.

The cheapest way is to fly from the south of the island, as the path to the underwater waterfall is very short. The problem, however, is that the helicopter obviously needs a landing pad. Many hotels offer such a landing site free of charge to their guests as a service! As a non-guest of the hotel, however, you can not use this service or have to pay between 40-160 € extra. A current list of costs and in which hotels a landing for the helicopter is possible, we have you here.

A sightseeing flight by seaplane

A much cheaper option to admire the underwater waterfall from the air is a seaplane flight (model SIRIUS TL ULTRALIGHT). Here, a 10 minute sightseeing flight with Lagoonflights costs just 1000 MUR (approx. 100 €) per person. The departures start at “La Prairie Beach” in the south of the island. The only drawback is that only one person can fly with you at a time.

Our pictures of the underwater waterfall in Mauritius

Since we were only in Mauritius for a week and had booked everything quite spontaneously, unfortunately no flight was available at our desired times. Timely reservation is therefore never wrong.

Nevertheless, we also wanted to have some impressions of the underwater waterfall. And so we went very early in the morning shortly after sunrise to the still deserted beach in the south of the Le Morne peninsula and let our drone Fly Mavic 2 Pro. Luckily it was absolutely windless and a beautiful morning. Even though we have already seen pictures where the illusion of the waterfall is even stronger, we are glad to have taken these pictures 🙂

Panoramic view of the sunrise over Mauritius

We hope you are as enthusiastic about this illusion as we are? 🙂