After diving on the west coast of Mauritius this morning, we used the afternoon to look at a beautiful church and make a detour to the capital Port Louis.

The church Cap Malheureux with the red roof

We parked our rental car directly on the main road that passes the church, otherwise there were no more free parking spaces. On foot we walked a few meters to the church of Notre-Dame-Auxiliatrice. There were not so many tourists here, but all the more local fishermen with their families who sat on the shore. We walked around the church and took a lot of photos. Here we had the opportunity to take some nice drone pictures with our DJI Mavic Pro 2. The church against the backdrop of the turquoise blue water looked really beautiful. A real postcard motif 🙂

Afterwards we took a short look into the interior of the church, which is very simply furnished with simple wooden benches and an altar. 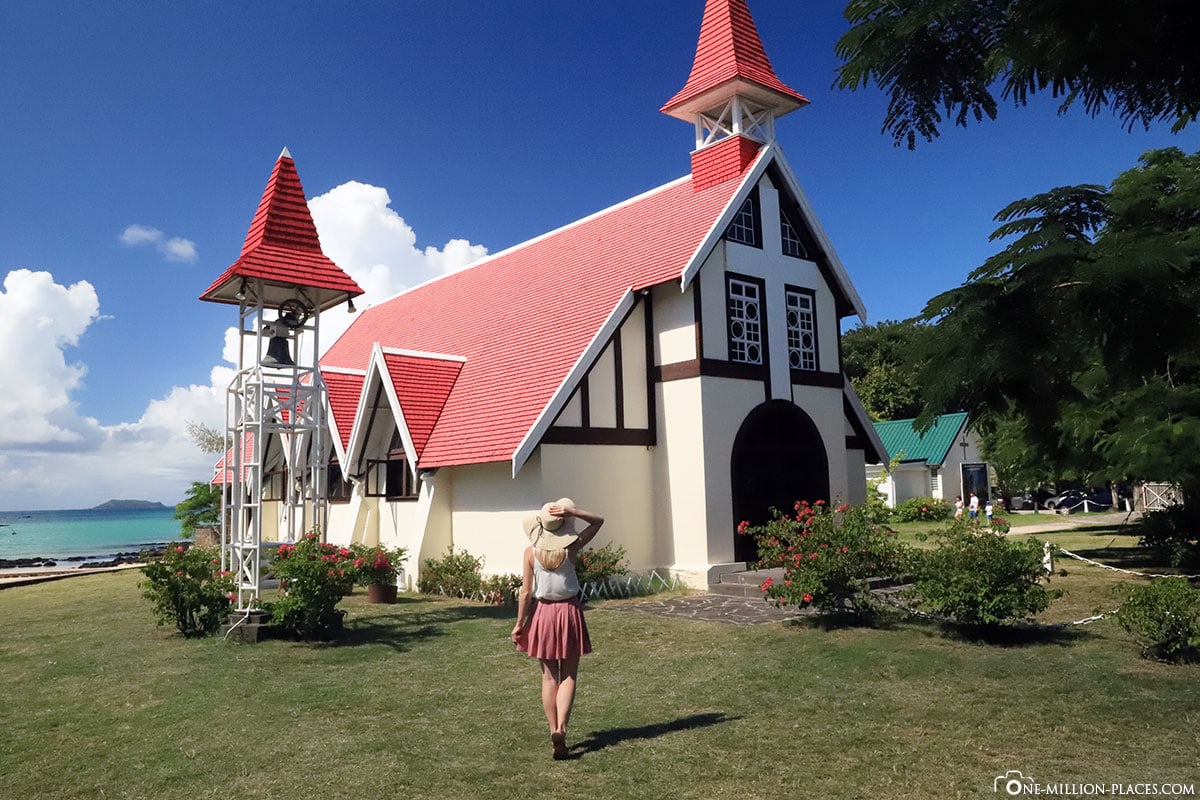 The Church of Cap Malheureux

The sights of Port Louis

From Cap Malheureux we drove over the A4 to the island capital Port Louis. It was already late afternoon, so we expected a total traffic chaos in the city. After we found a central parking lot, we took a closer look at the city.

The alley with the colorful umbrellas in the Caudan Waterfront

The Waterfront is a kind of shopping street and the tourist hotspot in Port Louis. Here you will find many shops, banks, restaurants & cafés, a marina and a five-star hotel. The highlight for us was an alley decorated with brightly colored umbrellas. A great idea that already exists in other cities around the world. We had only seen this in the artist village of Szentendre in Hungary. The umbrellas are replaced monthly here in Port Louis, so that they shine in different colors. Luckily there wasn’t so much going on here, so we could take some nice photos in peace.

In the Le Caudan Waterfront there is also the Blue Penny Museum, where the Red and Blue Mauritius are exhibited. The stamps are among the rarest stamps in the world and each have a value of around 600,000 euros. To protect the brands, they are only illuminated every hour for about 10 minutes. Outside this time, only copies of the stamps can be seen. Le Caudan Waterfront offers its visitors free parking at the following times: weekdays from 4 pm, Saturdays from 12.30 pm, Sundays and holidays. 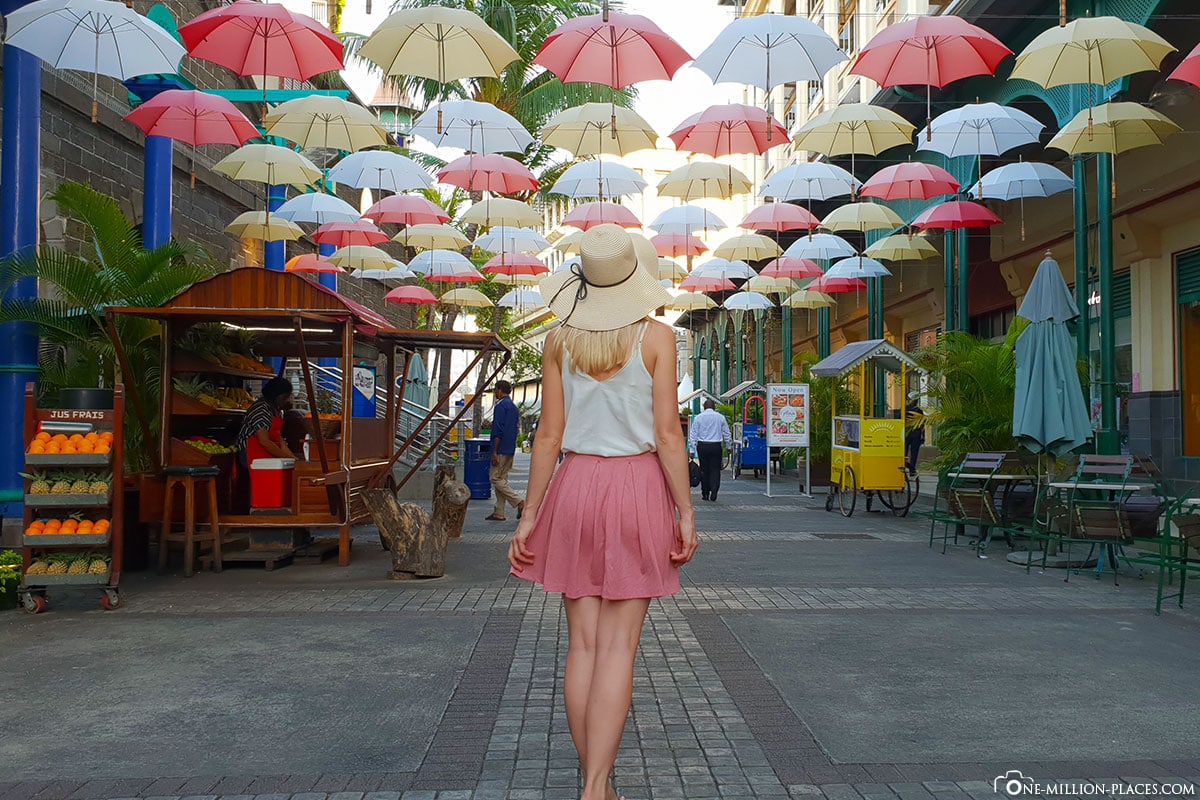 The colorful umbrellas in the Caudan Waterfront

Our second sightseeing stop in Port Louis was the Citadel or Fort Adelaide, which is located on a small hill about 100 meters above the city. Admission to the tour is free of charge. Unfortunately, the fort was closed today. But we could get at least a glimpse of the city and the ‘Champ de Mars’, the oldest horse racing track in the southern hemisphere. We have to admit, however, that we unfortunately did not like the city from above.

The fort was named after Queen Adelaide and built between 1834 and 1840 under the direction of William IV. The fortress was originally built to protect the port from a possible enemy attack, but also to tame any possible uprising of the local population after the racial tensions of the time. The citadel once housed accommodation for officers and a barracks that could house 200 people and vital supplies for three months. Over the years, the fortress changed its purpose and became a place for cultural events such as concerts or shows. Today, in addition to guided tours, the fort also offers a small museum and a souvenir shop.

Port Louis is home to a UNESCO World Heritage Site, the Aapravasi Ghat. This refers to a camp for Indian immigrantswho came to Mauritius in 1834 to be employed as contract workers on the many sugar cane plantations. The camp, which accommodated a total of 450,000 people, served as a stopover before moving on to the plantations. In 2006, Aapravasi Ghat was added to the UNESCO World Heritage List. In addition, the building complex is also protected as a monument.

Unfortunately we could not visit this building anymore, because we were too late. Today there are only a few remnants of the former walls: an entrance gate, the infirmary, the wall of a living hut, the remains of a bath and toilet house and a quay wall with a 14-step staircase. All the new arrivals who had arrived at the camp had to walk up the stairs – so today the steps stand as a symbol of the way to a new life.

After a stop for immigrant contract workers to Mauritius was imposed in 1871 and only migrants who wanted to leave Mauritius were accommodated in the camp, it was closed in 1923. 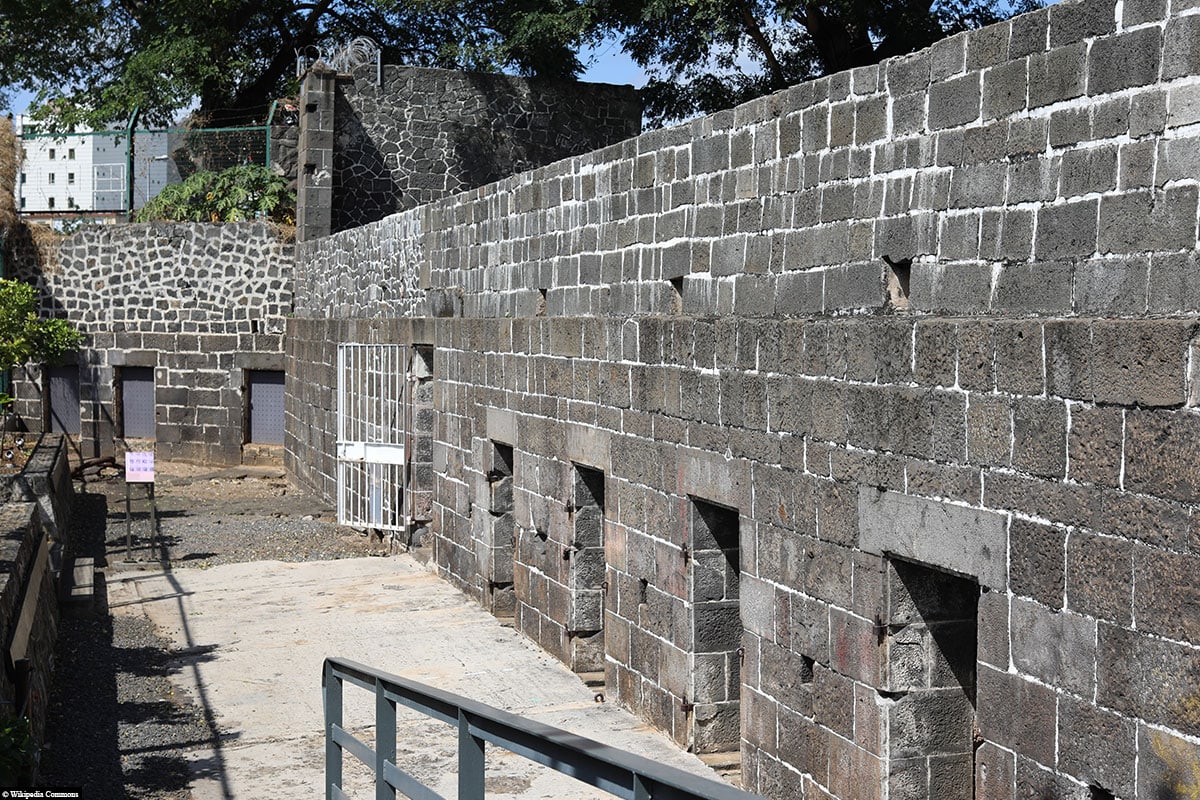 Other attractions in Port Louis include the Mauritius Postal Museum, the heritage-listed former main post office, which now has a postal museum. The Cathédrale Saint-Louis de Port-Louis is located in the centre of the city. A few hundred meters further is the Place d’Armes, a palm-planted, busy place. In Port Louis there is even a small Chinatown district with a beautiful archway at the beginning of the road.