Today we set off at the bridgetown cruise terminal in Barbados at around 6.30am. With us there were three other ships in the port: the TUI Discovery, a ship of the Costa shipping company and the Christina O., originally a ship of the rich shipping family Onassis. Our captain told us in his morning address (usually around 8 o’clock) that Christina O. is now a charter yacht and can be rented for up to 450,000 € PER WEEK. So if you have some small money left over, always to … 😉

The port info of the AIDAdiva in Barbados

Things to know about Barbados

Barbados is an island in the Caribbean and part of the Lesser Antilles. The island now has a population of about 280,000 and the capital is Bridgetown, home to a third of the population. Until 1966, Barbados was a British colony, so the official language is still English today. The highest mountain on the island is Mount Hillaby, which is 336 metres high. Barbados is sometimes referred to as the “land of flying fish” because you see them very often around the island and they are also the national dish. Barbados has a mild, tropical climate. The fact that it is not so hot is due to the constantly blowing winds. From the beginning of June to the end of November, the island is in the catchment area of the Atlantic hurricanes. The most famous sights include The Animal Flower Cave, Mount Gay Rum Refinery, Farley Hill National Park, Cherry Tree Hill, Morgan Lewis Mill Windmill, Turners Hall Woods Gardens, Harrison’s Cave and the capital Bridgetown.

The cruise ships dock at the Bridgetown cruise terminal in the southwest of the island. The harbour area is left by the harbour building, which is home to numerous shops as well as a tourist information office. From the harbour building, a 1.5 km long footpath (Princess Alice Hwy), some of which runs directly along the shore, leads to the city and to The city centre of Bridgetown. 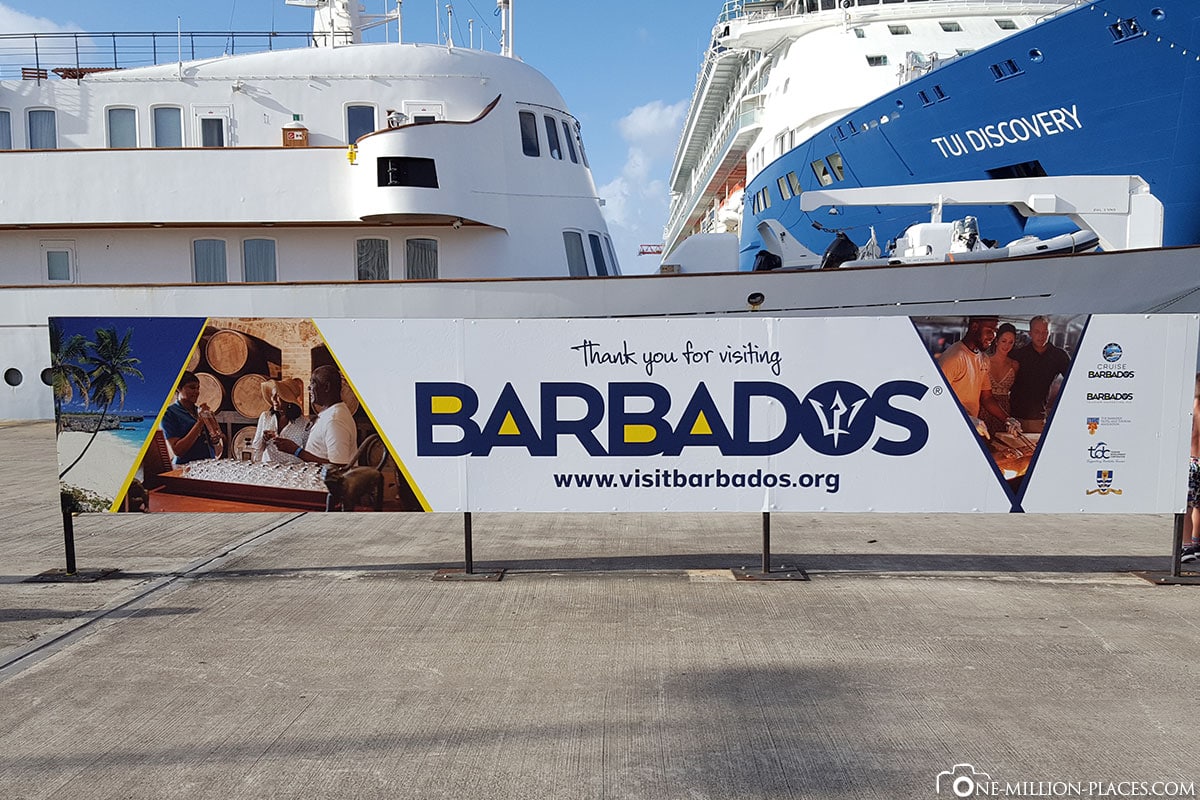 Barbados is not new to us. We were already two years ago on our world tour with the Carnival Valor in Barbados and made a catamaran excursion including snorkeling with turtles (see travel report). Since we have not discovered any other spectacular sights during our Barbados research, we decided this time to go diving again with the AIDA.

At 8.30am the divers of the excursion met on deck 11 at the Activity Counter. Together we went out of the harbour terminal to the bus, which was to take us to a diving school. 10 minutes later we have already arrived at the diving school Roger’s Shack, which is located directly on the beach of Carlisle Bay – the well-known turtle beach south of the port of Bridgetown. From here, other AIDA excursions have also started, such as a snorkeling tour or a bicycle excursion.

After we had finished all our diving equipment, we were ready. With our diving suit and our complete equipment we had to walk at a hot 30 degrees over the beach to the boat, which started directly from here. We really counted the minutes and seconds until we can finally jump into the cool water 😉

The 1st dive at Accra Reef

Our first dive site was the Accra Reef, which we reached within 10 minutes. In addition to the captain, a local diving instructor and a diving instructor from the AIDA were on board, who supervised our six-person diving group.

Since the AIDA diving instructors already knew that we would like to take time to take beautiful photos and videos underwater, Annika – the AIDA diving instructor – accompanied us. The other divers swam with the local diving guide. And we actually saw some things that the others hadn’t seen at all, because they were far too fast: a small black-and-white moray eels that slid out of a stone, a perfectly camouflaged stone fish, a big lobster, lots of small cleaning shrimp and a majestic firefish. A really nice, relaxed dive with a bit of flow in between.

For the surface break we went back to the diving school, where we exchanged our bottles and were able to strengthen ourselves a bit.

When we left after a good hour by boat again on the beach to get to our 2nd dive site, the boat had just picked up some speed before it stopped again. Everyone was laughing and we just thought we could have been swimming here 😉

So we were still in Carlisle Bay – more specifically, Carlisle Bay Marine Park. Why it is so suitable for diving is due to the six different wrecks,which lie here at a depth of 7 to 15 meters on sandy ground. The wrecks were beautifully covered with corals and sponges, which you couldn’t see enough of. Everywhere it was teeming with small and larger fish; whole schools of fish were in the wrecks.

On the way between two wrecks, we were able to discover an area where tube eels were lurking from the ground. As soon as they approached something, they disappeared back into the ground. So it wasn’t that easy to get a good photo.

The stone fish, which lay on the ground by a wreck, did not let us and the cleaning shrimp behind him get out of his way. Quiet and relaxed, he let himself be photographed and filmed by us. Its camouflage and the perfect adaptation to its surroundings is always fascinating for us. In one of the wrecks we also encountered a moray eels, which with its open mouth and looking at the teeth really looks a bit scary.

Our dive video of Barbados

Here is the video of our two dives in Barbados:

All travelogues from our AIDA Cruise (Caribbean Sea)

If you read the list of islands that AIDA is heading for on the route Caribbean Islands, you might think it was a dream for a moment: Dominican Republic, Aruba, Curaçao, Bonaire, Grenada, St. Vincent & the Grenadines, Barbados, St. Lucia, Dominica, Guadeloupe, Antigua. To reach eleven islands in 14 days is already a house number. But that was also the reason for us to choose this route. A cruise is predestined to get to know the Caribbean with its thousands of dream islands in a relaxed way. Here you can find all travel reports of our 14-day Caribbean cruise with AIDAdiva.