Our destination today was the Caribbean island of St. Vincent, a small island with just 117,000 inhabitants. The AIDA docked at the port terminal in the capital Kingstown at around 8am, having travelled about 84 nautical miles since our last stop at St George’s.

The port info of the AIDA of St. Vincent

For the day on St. Vincent we had planned a trip ABOUT water for a change and not under water. After a little research on what you can do on the island, the choice quickly fell on a volcanic hike.

Things to know about the volcano

The volcano La Soufriére on St. Vincent is an active volcano. With its peak height of 1,220 meters, it is the highest elevation of the northern part of the island and has a small crater lake. The last eruption with huge ash clouds was in April 1979. Since then, the volcano has been “sleeping.”

There are two ways to reach the crater rim via the La Soufriere Cross Country Trail:

(1) You start in the west of the island at the Richmond Vale Hiking Center and it takes a total of about 6 to 8 hours to get back and forth, depending on whether you still descend into the crater or not.

(2) Start in the east of the island at Rabacca Trail Head near Georgetown. Before reaching the visitor centre, you pass through numerous banana plantations on an unpaved path. It takes about 1.5 to 2 hours to get to the crater rim. Many say that this path should be the easier one.

There weren’t many options for us. Since we wouldn’t start with the AIDA until about 8 a.m., we wouldn’t have been able to get to the Richmond Center on time, as the tours usually start around 7:30 a.m. For this reason, we decided on the agency Sailor’s Wilderness Tours, which offers exactly such a tour to the volcano La Soufriére from the east side. After a short mail contact with the provider we had booked the tour together with another couple from the AIDA. 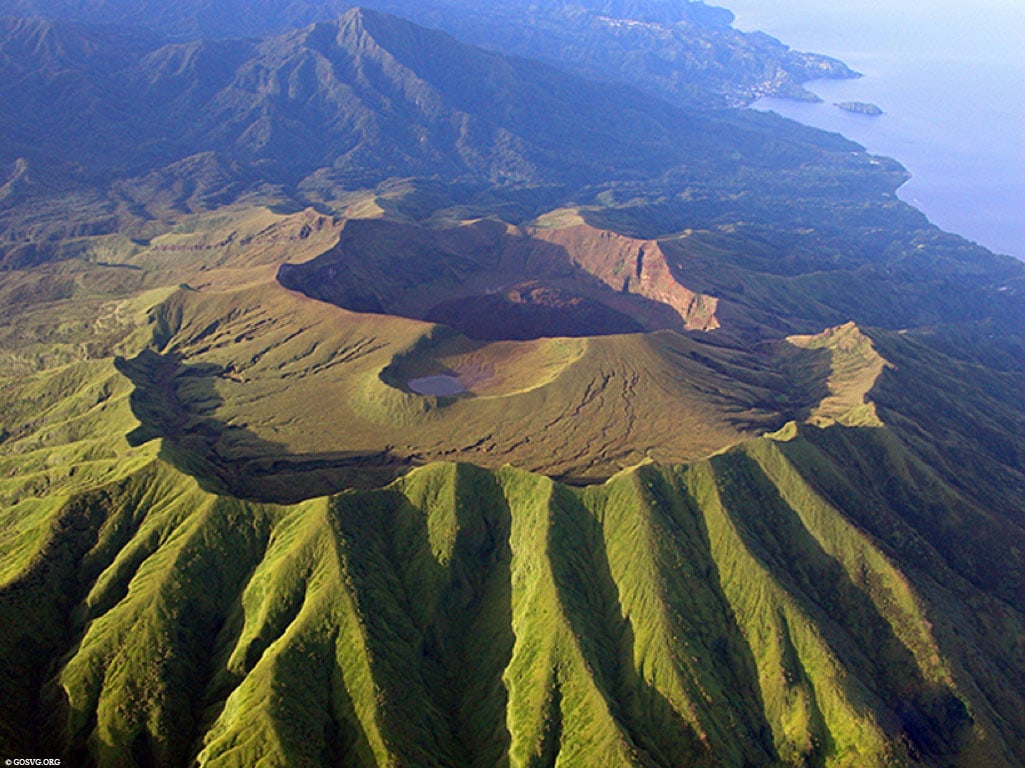 The journey along the rugged Atlantic coast

We had identified ourselves as a meeting point at 8.30 a.m. in front of the harbour entrance and were immediately surprised, because we were actually the only ones for today’s tour. So we got a private tour for four. Cool! 🙂

So get in the huge bus and off we went. The journey to the volcano took about 1 hour. From the harbour we went east through Kingstown until we reached the rugged east coast of the island. Here the waves romp in the sea until they hit the coastline. White sandy beaches can be found here in vain, because St. Vincent is an island of volcanic origin, so the beaches here are dark. On the way to the north we stopped on the Windward Highway from time to time to enjoy the view on the coast and take some photos.

The ascent to the volcano La Soufriére

At the starting point of the hiking trail there is an information room, an open pavilion, toilets and parking.

Our guide knew that two more EXCURSION buses from the AIDA would come, so we set off quickly. The 6 km long, ascending path towards the crater rim leads through the tropical rainforest and dense bamboo forests. The higher we got, the more foggy and colder it became. We have seen next to nothing from the surrounding area. The mountain slopes were foggy and obscured. In between, a few drops came from the sky. Not the best hiking conditions, but we knew what the goal was, so: teeth bite 🙂

On the way up, three locals each came to meet us with a backpack. Since there were no tourists, we asked our guide what they were doing up here. Maybe it’s their daily fitness program? No, wrongly thought. These were drug farmers and couriers! There are some marijuana plantations on the slopes of the volcano and the young men regularly walk there to care for the plants and pick up the crops.

Arrival at the crater rim

Shortly before reaching the crater rim, another group of hikers came to meet us and told us that we would not see anything today. Well, they were great prospects. When we finally arrived at the crater rim after about 1 hour and 45 minutes, we were curious to see what we would see. And it was also: NOTHING. Nothing at all. A white wall lay in front of us, everything was misted and covered. How annoying. Of course, we took some photos.

Shortly before we wanted to make our way back, we took another look at the crater. And behold… the fog wall slowly pushed aside and the interior of the crater appeared bit by bit: a large, green rock hill in the middle, a small crater lake, safrig green slopes and in the background the ocean. What a sight. The crater was larger than we had imagined. What luck we could still see him, because 15 minutes later everything was foggy again. Great! 🙂

The descent & a local lunch

After about 30 minutes at the crater rim we slowly made our way back to the descent into the valley. After taking just under 1 hour and 45 minutes to get back, we drove back towards Kingstown. In the small village of Georgetown we had lunch in a local restaurant with our guide. It is really always exciting what there is to eat in national specialties in the individual countries.

Around 5 p.m. we were back on the ship, quickly parked our things in the cabins and got out again. After all, we wanted to take a quick look at the city of Kingstown. Unfortunately, the sunset caught up with us faster than we thought, so we only managed a small tour. The port info of the AIDA helped us a lot with a map and the most important points drawn. So we visited the Carnegie Build, which once housed the library, and is said to be one of the most beautiful buildings in the city (let’s leave it uncommented), the Court House and a monument to the old market.

All travelogues from our AIDA Cruise (Caribbean Sea)

If you read the list of islands that AIDA is heading for on the route Caribbean Islands, you might think it was a dream for a moment: Dominican Republic, Aruba, Curaçao, Bonaire, Grenada, St. Vincent & the Grenadines, Barbados, St. Lucia, Dominica, Guadeloupe, Antigua. To reach eleven islands in 14 days is already a house number. But that was also the reason for us to choose this route. A cruise is predestined to get to know the Caribbean with its thousands of dream islands in a relaxed way. Here you can find all travel reports of our 14-day Caribbean cruise with AIDAdiva.