In the centre of Vienna, i.e. the Inner City or the 1st district, are many of the top sights of the 1.8 million large Austrian capital. The historic centre of Vienna has been a UNESCO World Heritage Site since 2001, as it is a special 3 key periods of European political and cultural development (medieval, baroque and founding period).

The pier of the A-ROSA in Vienna

Today was the first stop of our river cruise on the Danube with A-ROSA. In the best summer weather, we arrived in Vienna around 1 p.m. – an hour ahead of schedule. The pier of the A-ROSA Bella was the ship station Reichsbrücke, directly opposite the Danube Island. From here you can reach the Prater in about 15 minutes on foot. Only about 5 minutes away from the pier is the underground station “Vorgartenstraße” (U1), which takes you directly to the city centre.

Most of Vienna’s attractions are all very good and easy to explore on foot. During our sightseeing walk, we first explored the following landmarks in the city centre. 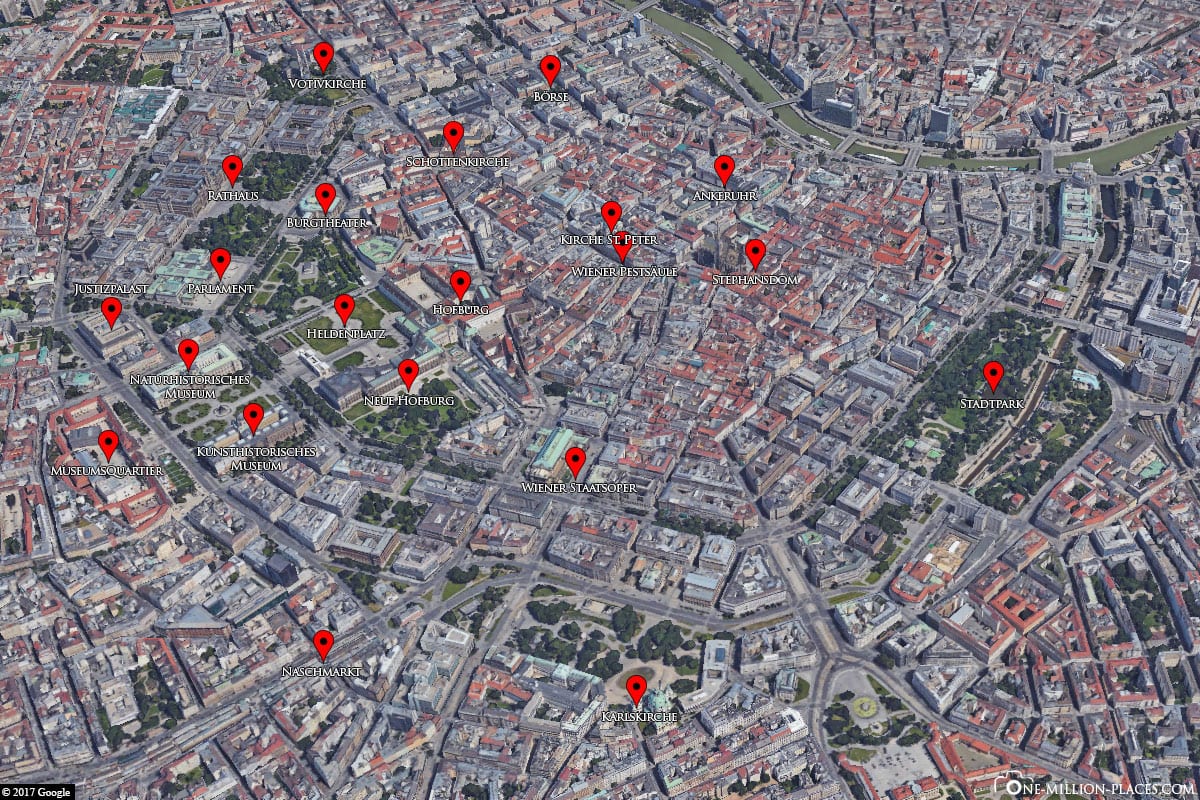 A map of the sights in downtown Vienna

On the left side of St. Stephen’s Cathedral, the many Viennese fiakers are waiting to show the city to the tourists in a cosy way. For a 15 to 20-minute tour you get 55 euros. At 35 to 40 minutes it is 80 euros per fiaker (max. 4 people).

The Hofburg with the Heroes’ Square

The Vienna Hofburg is the former imperial residence of the Habsburgs (13th century to 1918). Today it houses the Austrian National Library, numerous museums, the Spanish Riding School, a congress centre and the official residence of the Austrian President. There is also the Heldenplatz, the Hofburg Chapel and the Augustinian Church, where Sissi and Franz married.

The National Library with the State Hall

Right next to the Hofburg is the State Hall, which is part of the Austrian National Library. We had seen pictures of this on a small flyer and were very enthusiastic, so we definitely wanted to look at the hall. The Vienna State Hall is rightly one of the most beautiful historical library halls in the world. The walnut shelves contain an incredible 200,000 books from 1501 to 1850. You really can’t get out of your amazement. And also the frescoes on the ceilings of the hall, the sculptures as well as the four globes fit wonderfully here. If you are close anyway, you should definitely take a look at the former court library. Admission is 7 euros per person.

In the northwestern part of the 1st district – directly at the university ring – there are other beautiful buildings, such as the mighty Votive Church. Unfortunately, it was equipped during our visit; we were still able to take a quick look. The foundation stone for the church was laid in 1856 and the entire construction took more than 20 years to complete.

A few minutes walk south is the majestic town hall. We were there in the middle of the film festival, which usually takes place in the summer months of July/August. That means a huge screen including a public gallery and dining stalls was set up on the town hall square. For lovers of classical music a really great (free) attraction for warm summer evenings. Just across the street is the magnificent Burgtheater,opened in 1888, which is considered to be the largest German theatre and one of the most important stages in Europe. If you continue on Vienna’s Ringstrasse southwards, you will automatically pass the Parliament building. Again, we did not have a perfect view of the building, as television recordings had barriers in front of it and the building has also been undergoing a general renovation since July 2017. At the nearby Grete-Rehor-Park you can find the Palace of Justice, on whose roof there is the Judicial Café. We have heard from acquaintances that the view of the city from up here is supposed to be really great – but unfortunately we didn’t have time to try it out.

The Vienna State Opera (“The First House on the Ring”) was opened in 1869 and is considered one of the most famous opera houses in the world. The front of the building is still the only historical part, because the rest was completely destroyed in the Second World War and had to be rebuilt. The famous Hotel & Café Sacher can be found right behind the State Opera. When you see a long queue of visitors in front of a shop front, you already know that you are right 😉 It’s really incredible what hype is being made around the chocolate cake with apricot jam and chocolate glaze. The Hotel Sacher alone, who are allowed to sell the cake under the name “Original Sacher-Torte”, produce 360,000 cakes per year – of which 1/3 is consumed at the Hotel Sacher alone, 1/3 is sold in the various shops and 1/3 is shipped worldwide.

On the southeastern edge of the 1st district is the 65,000 m2 city park, which is the largest park in the center of the city. Particularly worth seeing here are the gilded statue of the musical waltz king Johann Strauss (son), the beautifully planted and colourful flower clock as well as the Kursalon.

Opposite the Hofburg – directly on the other side of the Ringstrasse – are the two sister museums, the Natural History and the Kunsthistorisches Museum. Both are among the largest and most important museums in the world. Separated only by a symmetrical park, the two museums are located directly opposite maria Theresien Square and look at each other. In the middle is the Maria Theresien monument, a monument of the Habsburgs. The small park was used by many for relaxing and picnics, because when we were there was the most beautiful weather.

At the upper end of the square is the entrance to the MuseumsQuartier, which is considered one of the world’s largest art and cultural areas. Here you will find about 60 cultural institutions and museums as well as many cafés and shops.

Many travel guides strongly recommend a visit to the Well-known Naschmarktbeyond the borders of Vienna. We also wanted to follow this recommendation, but we have to admit that we were very disappointed with the market. We find that there are now too many restaurants, restaurants, cafés, bars, etc. Really nice market stalls we only saw two, which were full of fruits and vegetables and were a real eye-catcher. Otherwise, antipasti dealers, spice sellers, stalls selling clothes, souvenir shops line up. Unfortunately, we did not feel the right atmosphere of a market here.

During our “foray” through the center we saw other beautiful buildings, such as The St. Charles Church at Resselpark, St. Peter’s Church, which is located in a side street of the pedestrian zone, the Plague Column, which was built in 1679 after a major plague epidemic, or the anchor clock atthe Hohen Markt , which was put into operation in 1914 by the then life and pension insurance company “Der Anker”. Over the course of 12 hours, 12 figures pass through the watch once with the help of a chain drive. They come from different eras and have their appropriate music accompaniment every hour. Above the respective figure you can see the Roman number, which indicates the hour and the minutes can be read from a scale.

The Starbucks City Cup of Vienna 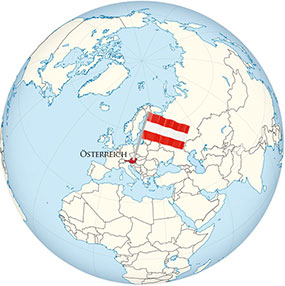