Bratislava was completely new to both of us, because we were not both here before – neither together nor separately from each other. So we were very excited about what the city is like and what sights we would expect here.

Things to know about Bratislava

Bratislava has about 420,000 inhabitants and is the capital of Slovakia. Its special geographical location on the border triangle with Austria and Hungary makes Bratislava the only capital in the world that borders on more than one neighbouring state. Bratislava is the political, cultural and economic centre of the country, the seat of government of Slovakia and the location of several universities, museums, theatres and other economic, cultural and scientific institutions. The city is located on both sides of the Danube and the most famous sights are the Old Town Hall with its main square, the Michaelertor, the Palais Grassalkovich, the Elisabeth Church, St. Martin’s Cathedral and Bratislava Castle.

The A-ROSA port info for Bratislava

The A-ROSA Bella has laid out at the passenger port, which is located between the bridges SNP and Staro most on the left bank of the Danube. From here it is a stone’s throw to the historic center of the city. Since we only had until the afternoon to explore the city, we stood in front of the ship at 9.30 a.m. and left. At that time there was still a yawning emptiness in the city. But for sightseeing this is actually perfect 😉

Pier: Passenger port between the bridges SNP and Staro most, on the left bank of the Danube
Arrival: 9.00 a.m.
Departure: 4 p.m.
Port Info: Download

In contrast to the millions of metropolises Vienna and Budapest,which we have already visited on our route with A-ROSA, Bratislava is comparatively small. Nevertheless, the Slovak capital has a lot to offer. Our first port of call was the white, four-tower castle Bratislava, which is perched high above the city on an 85 meter high hill and is THE landmark of the city. You walk over cobbled alleys from the town to the castle. Here you can also automatically pass the house to the Good Shepherd, a Rococo-style house that now houses a clock museum. The castle hill itself has been inhabited since the Stone Age, but the castle Bratislava was first mentioned in 805. After a devastating fire in May 1811, only the ruins of the castle remained for 150 years. After the Second World War, the castle was rebuilt and completed in 1968. Today there is a history museum and a beautifully landscaped park in the walls of the castle. 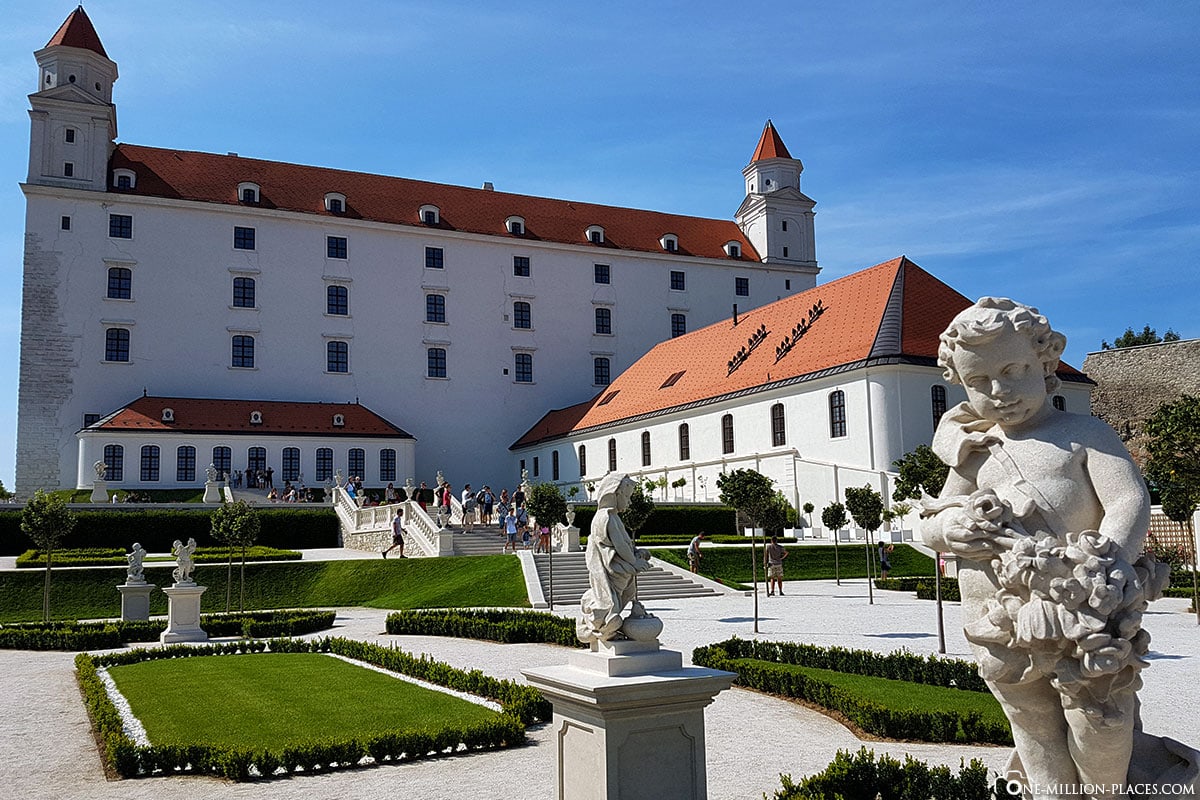 From the castle grounds you have a very good view of the old town of Bratislava and the Danube. From here you can also see very well the SNP bridge (bridge of the Slovak National Uprising) with the UFO, a restaurant at 85 meters height.

The old city wall and the Michaelertor

On the way to the city centre, it is best to cross staromestska street via a small pedestrian bridge, so that you can get out right next to the old city walls. Of the former city wall with 4 city gates, only the Michaelertor, which is located at the northern end of the old town, as well as a part of the walls together with two towers, the bird tower and the northwest tower have been preserved. Unfortunately, an area of the city wall was equipped with us, so that we could only visit a small part. Interestingly, this area was only discovered during demolition work in the 1970s, when the SNP bridge was built.

At the southern end of the city wall is the Gothic-style St. Martin’s Cathedral (or “Cathedral of St. Martin”) from the 13th century. The largest church in the city has a height of 87 meters due to the cathedral tower. Between 1563 and 1830, St. Martin’s Cathedral was the coronation church of the monarchs of the Kingdom of Hungary. During this period, 19 kings and queens were crowned here.

The sights in the old town

There are some historic buildings around the central square in the old town, the Hlavné n’mestie. The Old Town Hall is probably the most important of these. The Gothic building was first mentioned in 1370 and served as the town hall for the first time from 1434. In the interiors there is an exhibition about the history of Bratislava from prehistoric times to the end of the 1930s. An archway leads to the very interesting Renaissance courtyard of the Town Hall, which leads one side to the Primatial Palace on the other. The pink building is considered to be the largest neoclassical building in Slovakia and was built at the end of the 18th century as a city palace for the archbishop of Esztergom. Today there are exhibitions of the municipal gallery in the walls. On the northern edge of the old town is the Trinitarian Church, a Catholic Baroque church, which is located directly on the county square. In the southern part of the old town you will find the Philharmonie and the National Theatre. From the National Theatre there is a very nice avenue with fountains and many seating areas, on which you can relax in between nicely and treat yourself to an ice cream at one of the many ice cream parlours.

The figures in Bratislava

Everywhere in the city you will find figures,be it the famous canal-gazer sumil, a soldier of Napoleon leaning on the bench, the “Beautiful Naci” with a cylinder hat, a courageous rope dancer with spectators in the shopping center Eurovea or even two young people at a letterbox. Very close to the main square there was until 2 years ago also a paparazzo figure, which is unfortunately no longer there. 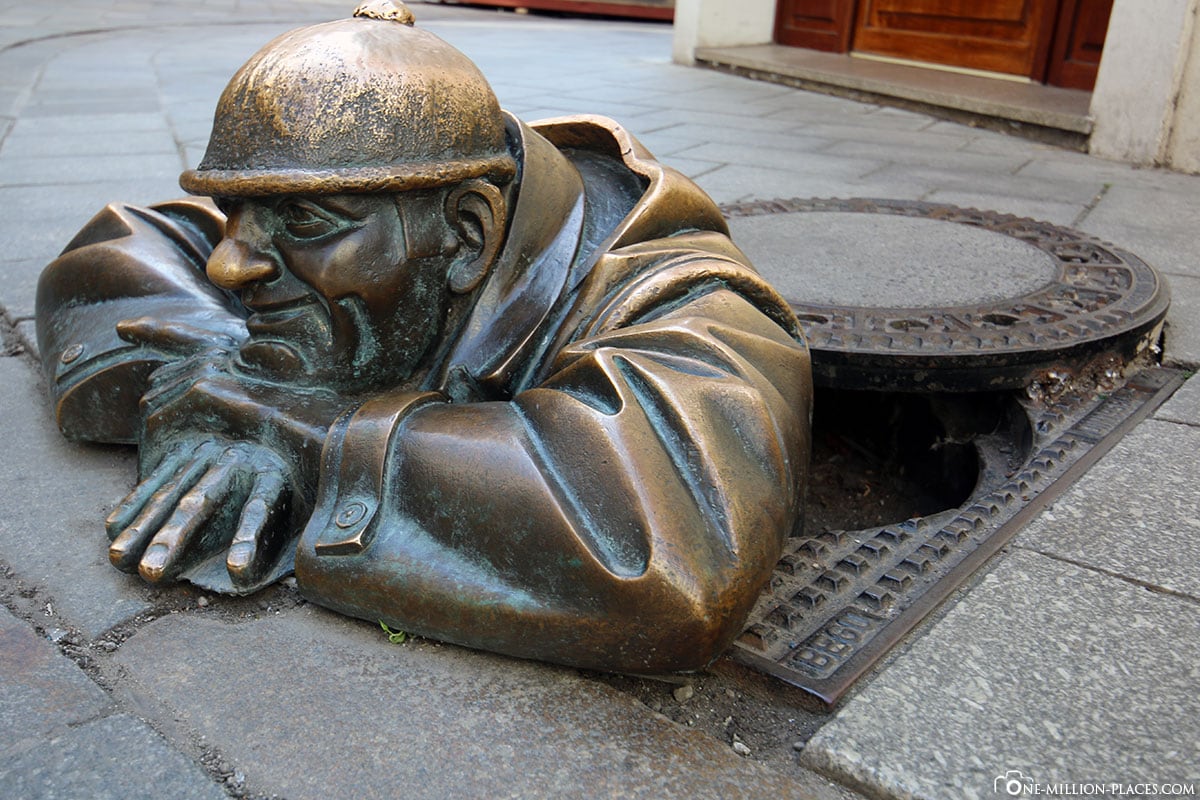 North of the old town is the Palais Grassalkovich, where unfortunately it was just built, so we couldn’t see too much of it. The Rococo-style palace has been the seat of the President of the Slovak Republic since 1996 and is not open to the public. However, you can enter the park, which is behind the palace.
If you pass the palace on the right and follow the road, you will reach a really very original building after about 900 meters. It is a (rather ugly and dreary) steel structure in the form of an inverted pyramid, which has been the home of Slovak radio since 1983 (Slovenska rozhlas). Beautiful is different, but definitely an eye-catcher. From here we went back to the city centre, where we wanted to visit the Roman Catholic Church of St. Elisabeth. We really couldn’t decide what was bluer: the sky or the church 😉 We hadn’t seen such a bright blue church before – definitely something else. Unfortunately, the church was closed. However, we were able to take a look through the glass entrance door into the interior. On our way back to the ship we went briefly to the Eurovea Galleria, the largest shopping center in the city.

Just before the A-ROSA departed, we were back on the ship and were able to let the backdrop of Bratislava take over us again from the sun deck while we set off towards Melk. Our conclusion: Bratislava is a beautiful little town that you can easily visit in half a day ❤ 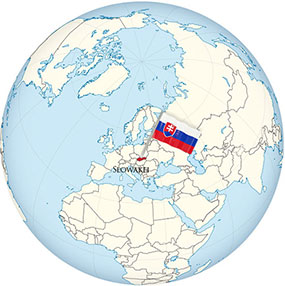