After our visit this morning to the Sepilok Orangutan Rehabilitation Centre we went to the Proboscis Monkey Labuk Bay Sanctuary.

The Proboscis Monkey Labuk Bay Sanctuary is a station where you can observe the nasal monkeys found exclusively on Borneo. The site is surrounded by green palm plantations.

When we got there at noon, there were hardly any other people, which of course was great. We first played with the little “Silver Leaf Monkeys” (german: “Silver Hood Langur”) that run around the grounds. The special thing is that the monkeys were not shy at all. There were many little baby monkeys and even the monkey mothers seemed happy to give their little ones to us for a short time. The little curious monkey babies loved to climb up to everything that gets in their way. A highlight at the end was a rhinoceros (“Hornbill”), which made itself comfortable right in front of us on the railing.

But then came the actual stars of the facility: at different times feeding singeritis of the Proboscis Monkeys takes place and at this time some 30 to 40 nasal monkeys emerge from the jungle and come up to a few meters to the visitor platform. It’s great to see the animals in interaction. But you have to be careful not to get too close to the animals or to let them get to themselves, because they can sometimes become very aggressive. After the food was empty, it didn’t take long for the nasal monkeys to go back to the jungle… with partly impressive jumps over several meters from tree to tree.

Our video of the nose monkeys

Here is a little film in which you can also hear the funny sounds that the nose monkeys constantly make of themselves:

In total we certainly spent two hours in the Sanctuary and we really liked it. Afterwards, our tour went even further to the Rainforest Discovery Center at sunset. We walked here 17 meters above the earth through the rainforest and let nature and the many sounds affect us. And here again we have seen an orangutan. 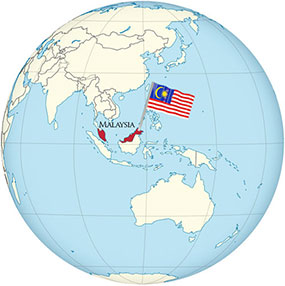