That La Palma is an island of volcanic origin can be seen at every point when driving over the island: because volcanoes, bizarre lava landscapes and black beaches characterize its special appearance. On one day we explored the south of the island with our rental car and were able to find some sights and natural spectacles.

The sights in the south of La Palma

From our hotel H10 Taburiente Playa a little south of the capital Santa Cruz de La Palma we could reach the southern tip of La Palma with our rental car in about 45 minutes. The south of La Palma is not as touristy as other parts of the island, so everything here is a little quieter and less hectic. The most important sights can thus be easily explored in one day. There are few, small towns and beyond that a lot of nature. The south of La Palma contrasts scenically with the green, wooded north of the island. Due to the two volcanoes San Antonio and Teneguía, in the south you will find an extraordinary landscape of black solidified lava and a rather sparse vegetation. 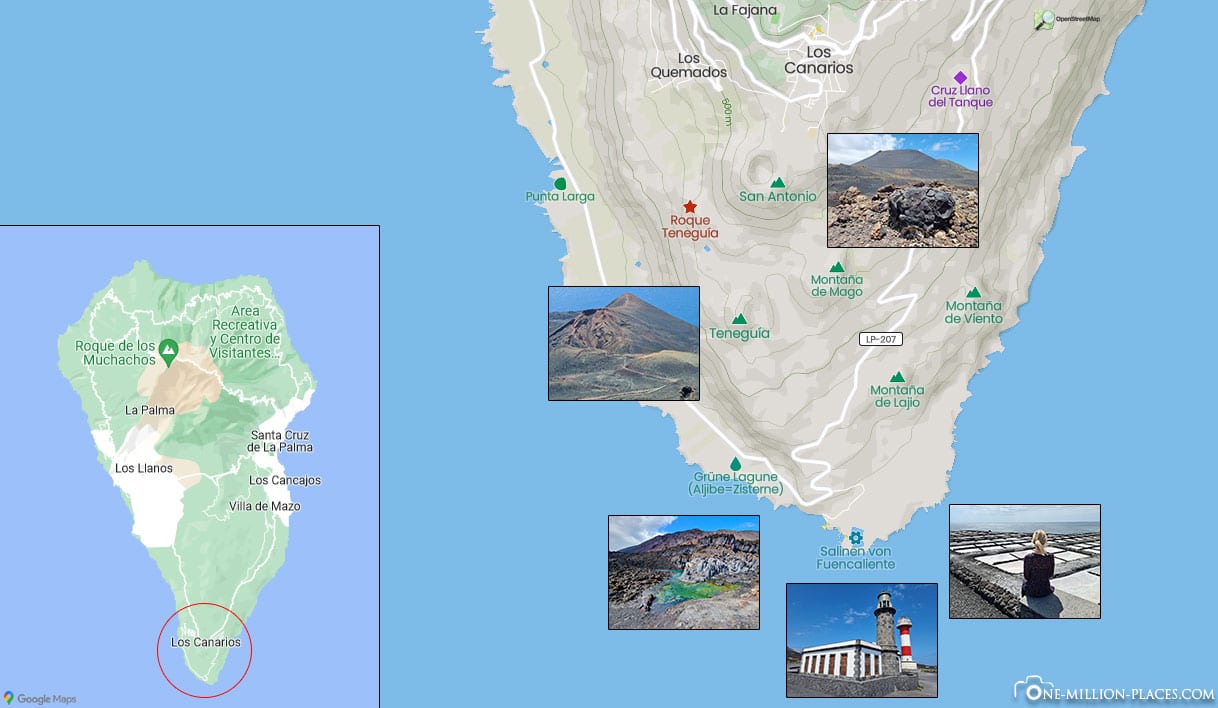 The sights in the south of La Palma

Our first port of call in the morning was a visitor center that houses an exhibit with exhibits and information about the 1677 volcanic eruption and the formation of the San Antonio Volcano. The entrance fee for the visitor center incl. Parking and the possibility to walk on the crater rim is 5 EUR per person.

From the visitor center, a hiking trail leads along the crater rim. From up here you have a great view into the round crater of the volcano San Antonio, which is about 150 meters deep and lies at an altitude of 632 meters above sea level. NN. lies. At its base, it has an outer diameter of about 1 kilometer. From here you can also see the volcano Teneguía, located further south, which erupted in 1971.

Note & Tip: When we were on top of the crater rim, a fierce, almost hurricane-like wind was blowing. So be sure to take some warmer clothes and a hat. With our little mouse we could not walk the whole way, because the wind was much too violent – partly we could keep ourselves only with difficulty on the legs. Therefore, one of us quickly walked back to the visitor center with her and the other was able to explore the crater rim.

Since we didn’t want to walk all the way from San Antonio Volcano to Teneguía Volcano, we got a tip at the visitor center that there should be a few parking options a little closer to Teneguía Volcano. We have marked the location of the parking lot for you here in Google Maps. From there we started walking with the stroller. Unfortunately, this was not so easy, because the road was flat, but very sandy – and accordingly, pushing the cart was very difficult. So after about 30 minutes we decided that one would walk back to the starting point with our daughter and the other would explore Teneguía Volcano. In the end, this was the best solution for everyone involved 🙂

The volcano Teneguía is a 428 meters high cinder cone that was formed in 1971. It forms the southern end of the volcanic chain that crosses La Palma from the Caldera de Taburiente to the south.

Lava landscapes & Route of the Volcanoes

The way down to the sea along the road LP-207 leads again and again through the bizarre and very impressive lava and volcano landscape, which totally reminded us of Hawaii and here especially of the Big Island 🙂

The south of the island is also the starting point or end point of the strong>Route of the Volcanoes (“Ruta de los Volcanes”), an almost 18-kilometer trail that runs along medium to high elevations – from a minimum elevation of 725 meters in Fuencaliente to a maximum elevation of 1,932 meters at the summit. The very demanding trail runs between the municipal districts of the north and south of La Palma. During the well-maintained and signposted hike, you can view both the north and south sides of the island and, with a little luck, observe endemic animal species. You can see an overview of the volcano route here.

La Palma offers an incredible number of beautiful hiking trails of varying lengths and difficulty. A good map with all hiking trails over the island can be downloaded here as a PDF version.

The Faro & the Salt Flats of Fuencaliente

Directly on the south coast of La Palma we discovered two lighthouses. The smaller, older tower has not been in operation since 1985. In return, the new red and white striped lighthouse was put into operation in the same year. From the lighthouse, a small path leads directly to the salt flats of La Palma, which can be visited free of charge. Due to the sun, the seawater condenses and the salt remains. The extraction of the salt is then done in the traditional way by hand. We really liked the contrast between the white salt, the black lava rock and the blue sea.

About 3 minutes drive from the lighthouses, there is a very cool lagoon. The Green Lagoon lives up to its name, because the water shimmers in the most beautiful shades of green – especially when the sun is shining. With the surrounding rock formations, it looks totally spectacular. If it had been a little warmer, we certainly would have taken the chance and cooled off in the lagoon. Right next to the lagoon is the black sand beach Playa de Echentive, which was created in 1971 after the eruption of the Teneguia volcano. There was actually super little going on here, so we had the beach almost to ourselves.

We would have liked to drive from here further north along the coast towards Puerto Naos, but unfortunately the road was still closed due to the 2021 volcanic eruption.