Rain, rain and rain again… Today, unfortunately, the weather has made a dent in our route planning on our way to Wellington… 🙁

Actually we wanted to do the Tongariro Alpine Crossing in Tongariro National Park today. This trail through an active volcanic landscape with its Red Crater and the blue Emerald Lakes is in one direction 19.4 kilometers long and can be walked in one day. But when we got up, it was already raining in torrents and so a lot of the whole thing unfortunately into the water. Very bad!

Tongariro National Park is the fourth oldest national park in the world. In the centre of the park there are three active volcanic mountains: the Tongariro (1968 m), the Ngauruhoe (2291 m) and the Ruapehu (2797 m). The National Park is one of only 35 sites to be a UNESCO World Heritage Site. The Tongariro Alpine Crossing is really the first activity in 117 days on a world tour that we couldn’t do as we had planned in advance. But since we had already booked the next hotel and especially the ferry to the South Island, we had nothing more than to skip this hike and continue to Wellington. But we have found some nice photos of other hikers, which we do not want to withhold from you.

So we made our way from Turangi on the four-hour journey to Wellington, New Zealand’s capital, where we arrived in the afternoon. Since it rained quite heavily here, we simply postponed the sightseeing until the next day. We chose The Setup on Dixon hotel right in downtown Wellington.

We had a room out to the street and it was terribly noisy because the window wasn’t properly locked. Unfortunately we could not change to another room, as everything was fully booked. The room itself is simply furnished, but everything is there (water cooker, heating, fan). Everything was clean. Wi-Fi is free up to 500 MB, in addition you have to pay something. The Internet worked, but it wasn’t the fastest. The location of the property is great. Restaurants, bars and shops in the immediate vicinity. The hotel does not have its own parking. There are several public car parks within walking distance. On the road you can max. 2 hours parking for a fee.

Our room at The Setup on Dixon

Wellington’s place in the world’s place

Wellington, or Wellington City, has almost 200,000 inhabitants and is the capital of New Zealand. The town is located at the southern end of the North Island on the Tasman Sea and is named after Arthur Wellesley, 1st Duke of Wellington. The western part of the city is characterized by a mountain landscape, which culminates with the 537 meter high Outlook Hill at the southern tip. Despite all the adversity such as earthquakes, large fires and the winds that regularly blow in storm strength, the sparse settlement has developed into a thriving centre for imports and exports with a significant port since the 19th century. In 1865, Wellington officially became New Zealand’s capital and is now the country’s cultural centre. The city centre of Wellington is not very large and so everything is relatively close to each other and is easy to reach on foot. The most famous sights include the older New Zealand Parliament Building, the new Government Building (Beehive), the historic Wellington Cable Car, the Botanical Garden, the Old Government Building, the Museum of New Zealand Te Papa Tongarewa, the National Library of New Zealand and Mount Victoria as one of the best vantage points in the city. 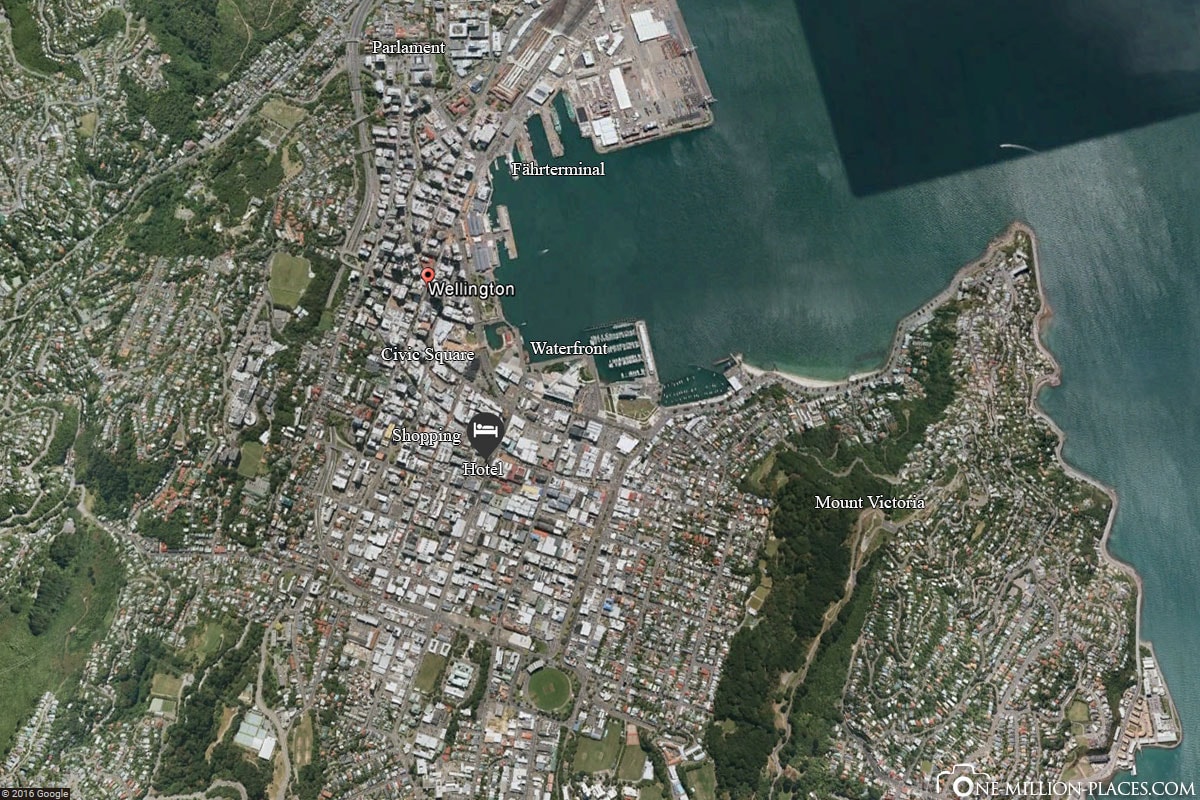 The view from Mount Victoria

The next morning we went first to Mount Victoria, from where you have a wonderful view of Wellington, the harbour and the bay.

The view from Mount Victoria

A walk through the city centre

Afterwards we went to the ferry terminal to drop off our rental car (see travel report car rental for New Zealand).

Since we are travelling to the North and South Islands of New Zealand, we should have taken the car on the ferry between Wellington and Picton. Of course, this would have been possible, but it would have cost an additional EUR 100. Most major car rental companies in New Zealand have rental stations right at the ferry terminals. As a rule, you then drop off your car in a port and get a new car on the other side. The huge advantage is that you save the cost of the car on the crossing! Motorhomes, on the other hand, are usually taken on board. After a rental car booking, you should not forget to arrange the car exchange in advance with the car rental company or in our case DerTour (day of crossing and tell times) so that a car is actually available. At Europcar we were able to drop off our car at the ferry in Wellington (North Island) and get a new car at the ferry station in Picton (South Island). We had booked our car online in advance via DERTOUR.

Since we still had some time until our ferry departed, we looked at the New Zealand Parliament building and government building. We also had a bit of time to walk across Civic Square and along the promenade.

In the afternoon we took the ferry from Wellington to the South Island to Picton.

The Starbucks Cup of Wellington

Wellington has a Starbucks store and also its own cup 🙂

The Starbucks Cup of Wellington 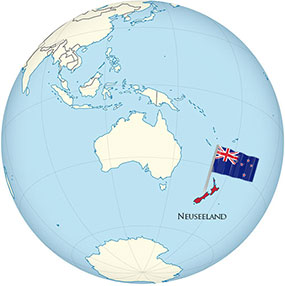