This morning we flew from Hilo with Hawaiian Airlines to Kahului and thus drove to the third Hawaiian island on our journey: Maui. After arriving at the airport we picked up our rental car (booked via billiger-mietwagen.de) and went to the hotel.

Our hotel on Maui

Kahului is one of the economic centre of the island, along with the adjacent town of Wailuku. This is where we were looking for a hotel for the next three nights. As with our last Maui stay, we stayed at the Maui Seaside Hotel. The hotel itself is well located as it is only a few minutes from the airport. Opposite the hotel there are various shopping facilities, supermarkets and fast food shops. The rooms are very spacious and clean. The hotel is still a bit reminiscent of a motel. Parking is unfortunately not in vain on the premises, we had to pay 7 US dollars per day for this. What we liked: There is a room where you can take a shower/change on your day of departure – and at no extra cost. Really a good service, especially if you were on the island all day and only flew away in the evening.

From our hotel we started our sightseeing tour today: to West Maui. You can basically circumnavigate the whole of West Maui by car, because it leads a well-developed highway all around. From Wailuku, Honoapiilani Highway 30 winds along the coast and offers beautiful views of the ocean.

However, Honoapiilani Highway 30 eventually stops and passes into Kahekili Highway 340 at the northern tip of West Maui. Some car rental companies warn against driving this section of the road as it could be dangerous. This is the second time we have driven Highway 340 and we cannot confirm that it is dangerous. Yes, sometimes it gets a bit tight on the road when a car comes towards you, but we didn’t feel unsafe for a second. Unfortunately, Highway 340 was partially closed because maintenance work was carried out. But we simply drove from both sides to the barrier, so that we could still see all the viewpoints.

The small town of L’haina

Theformer capital of the Kingdom of Hawaii is a historic whaling and plantation town and is now a small tourist town (Google Maps). The historic center of the village was listed as a National Historic Landmark in 1962. On the bustling Front Street, many of the old shops of that time were converted into art galleries, restaurants and souvenir shops. The eye-catcher here is a huge banyan tree, which was planted in 1873 and now dominates Lahaina Banyan Court.

The history of the town can be followed on the signposted Lahaina Historic Trail, which passes various historic buildings, such as the old courthouse.

Our tip: Free parking is available on the corner of Front Street / Prison Street.

A little further north, near Baby Beach, is the Lahaina Jodo Mission, a replica of a Japanese Buddhist temple. It is home to one of the largest Buddha statues outside Asia (3.6 meters high and 3.5 tons) erected in 1968 in memory of the first Japanese immigrants in Hawaii.

The Nakalele Blowhole and the Heart Shaped Rock

Nakalele Point is located at the northernmost tip of West Maui (mile marker 38.5) and is known for the Nakalele Blowhole. From the parking lot, a sandy and stony footpath goes down to the ocean. On the way you will find some signs to warn of the dangers of the blowhole and the dangerous surf. We have also read that there has been a death here before. So caution was required.

When we were downstairs, we were looking for a good and safe position to watch the blowhole and not get wet. The ocean was very rough on the day, so the waves hit the cliffs and the stones with full force. The best conditions for a beautiful blowhole 🙂 And we were not disappointed: Geyser-like, the water came out of the blowhole and rose to a height of meters. Madness, what violence is behind it. 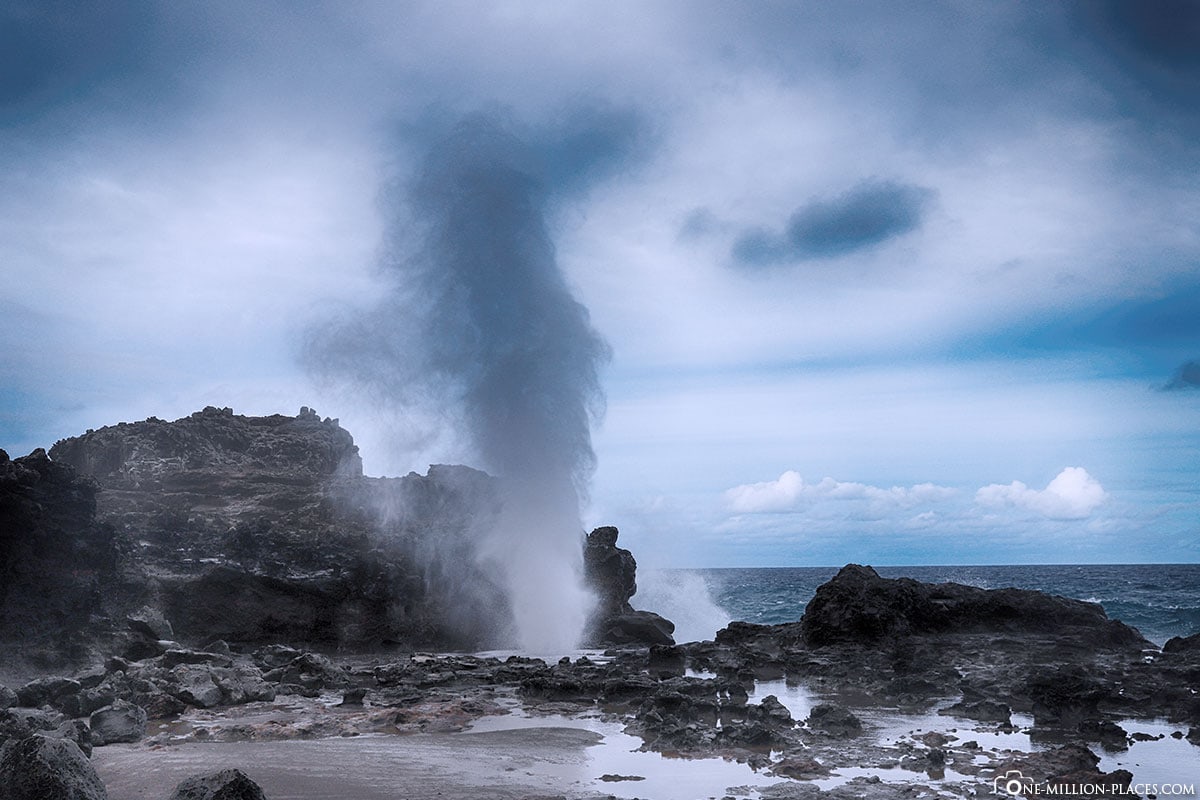 When you see the blowhole in front of you and the view turns right along the coast, you will discover a small hole in a rock that has the shape of a heart. Many call this rock Heart Shaped Rock – a great photo motif!

Our video of Nakalele Blowhole

Here is a short video of Nakalele Blowhole.

Iao Valley State Park can be reached in a few minutes via Iao Valley Road directly from Wailuku. The park is surrounded by the steep slopes of West Maui Montain and houses the famous Iao Needle, a leafy volcanic monolith. Unfortunately, the park was closed in September 2016 due to heavy rains and flooding, causing severe damage to the road, a park and residential buildings. The park was still closed during our visit in November 2017. But now we have seen online that the park has been open again since 22 December 2017.

At the gates of Iao Valley State Park is Kepaniwai Park. The publicly accessible garden was created in 1952 to commemorate the different cultures that have played a role in the history of Hawaii. For example, there is a Japanese garden, a Chinese garden, a temple and a tea house. 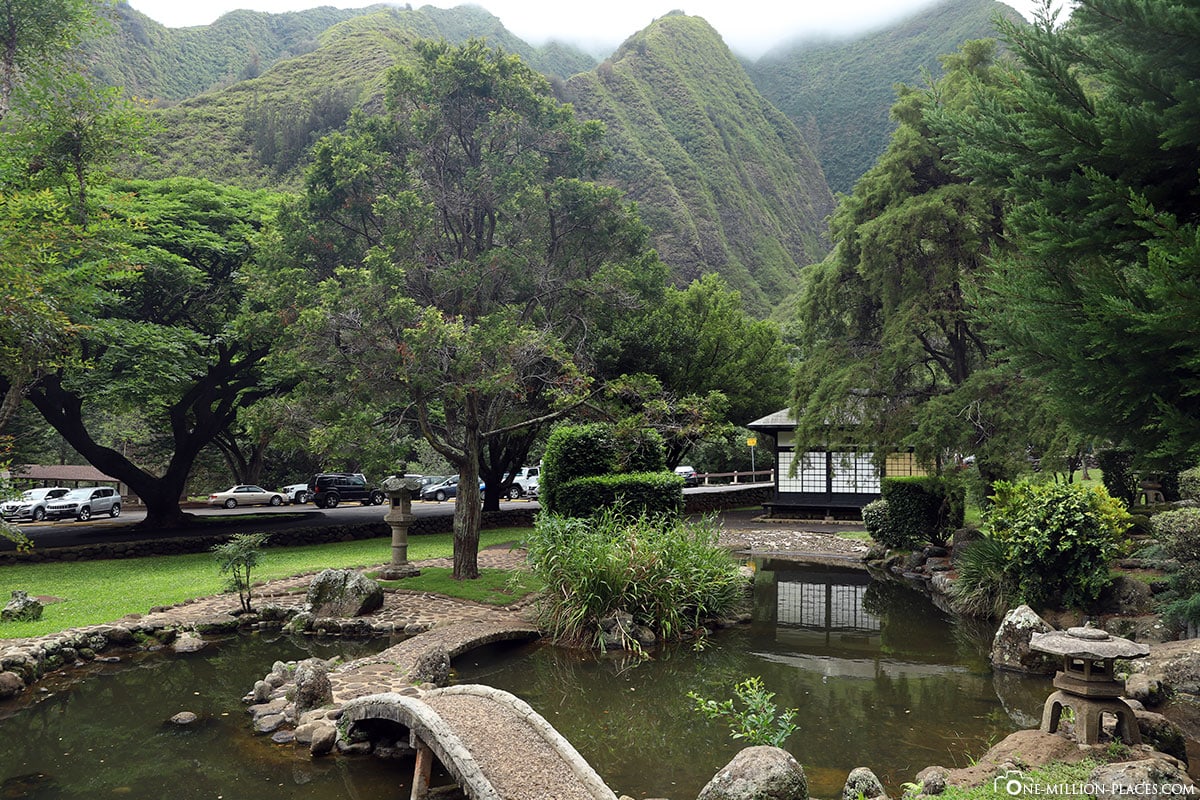