Today we were already sitting at 8 o’clock in the morning in our rental car,because we wanted to climb the Koko Crater Railway Trail, which is located on the southeast side of the island of Oahu, just in the early hours of the morning. And since it gets very hot in the morning, we wanted to use the early morning hours so as not to sweat completely immediately after ten meters.

The Koko Crater is a 368 meter high tuff cone. During World War II, the military built several bunkers on the top of Koko Crater. To move personnel and supplies up and down, they built railroad tracks on the mountain. The railway tracks have been preserved to this day, even if no more supplies are transported here. For this, the trail has become a popular tourist attraction. 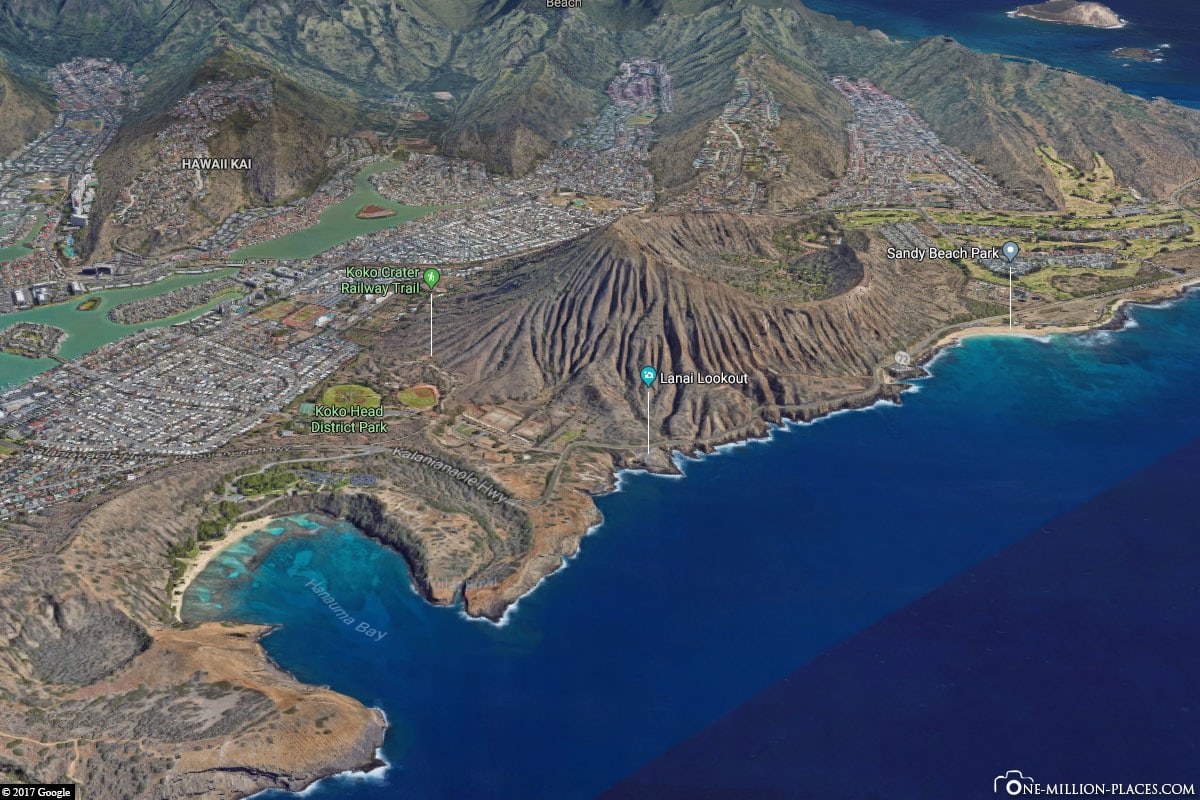 Actually we wanted to park directly in the parking lot of the Koko Crater Trail, but unfortunately the access from the Kalanianaole Highway was closed. To get to the parking lot, you should drive right over Anapalau Street. Since we didn’t have a sat nav with us and didn’t know, we drove to the parking lot of Hanauma Bay, where you can park all day for 1 US dollar. Since we wanted to refresh ourselves in the bay anyway after the hike, we have already secured our parking space, because it can happen that the parking lot is simply closed at some point due to overcrowding. That’s what happened two years ago, when we were here.

The way from the parking lot to the trail

Within five minutes we had equipped ourselves with hiking boots, sunscreen and enough drinks and our hike could start. From the Hanauma Bay car park it took about 15 minutes to get to the foot of the Koko Crater Railway Trail. Here you will also find two trees with lots of sports shoes hanging on them – probably from the many tourists who left their sneakers here as souvenirs 🙂

Although it was only 9 o’clock, there were already many tourists on the way here, but also locals who just wanted to complete their daily fitness program.

The hike on the old railway tracks

Full of motivation, we walked the first steps on the way up. To get to the viewpoint of Koko Crater, you have to climb 1,048 railway sleepers. 1.048! It’s good that we didn’t know the number before. Then we could probably have found our motivation under the sofa 😉 The first steps were still relatively normal, even if the sun was already burning. But the more steps one had taken, the closer came the last steep section of the path. But in front of it, about halfway up, there is a kind of bridge. This is a small section on the way up, where the ground disappears below the railway thresholds. It’s kind of a queasy feeling when you’re running over it. There is a small alternative path on the right side, which we also used on the way back – so you can make a small detour around the “bridge” and have solid ground under it.

And after this section it got really steep. We had to stop every few meters, take a breather and have a drink. The sun was shining more and more and leaching one. The railway sleepers are not all at the same distance or height, so it is difficult to find a rhythm when going up. During the small forced breaks, you had enough time to look down again – on the way, the city and the ocean. Really a dream place.

The view from Koko Crater

And at some point, after about 45 minutes, we made it and got to the top. The feeling of happiness could not have been greater. We sat down here at an old bunker and enjoyed the view from above. What a beautiful view of the surroundings, the blue water and Hanauma Bay. From the bunker, a small path leads a little further up – to the actual summit of the mountain. Here is a metal lattice platform,which also invites you to relax once again. 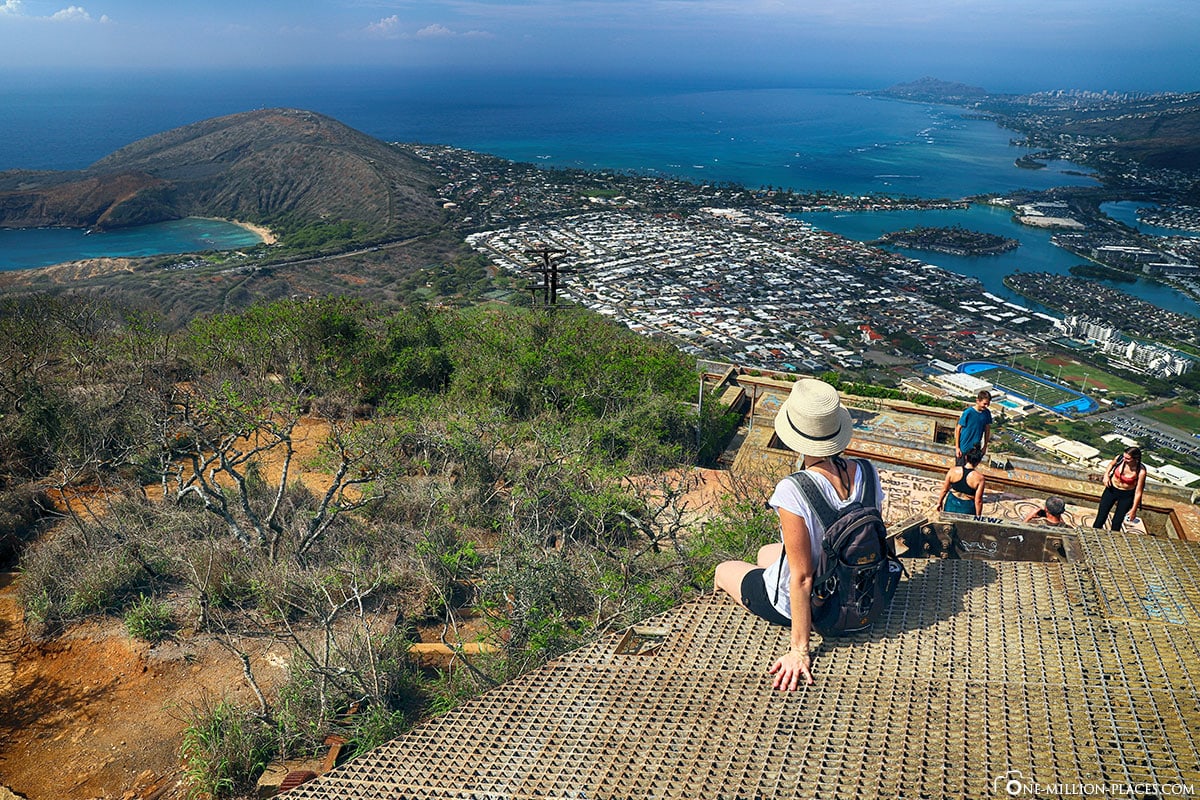 The great view from Koko Crater

The way back to the parking lot

After about 20 minutes we made our way down again. The way back went faster than expected. Of course, you always have to be careful where you go with the different height of the railway thresholds, so that you do not fall or slip. But since we were well equipped in terms of shoes, this was not a problem. 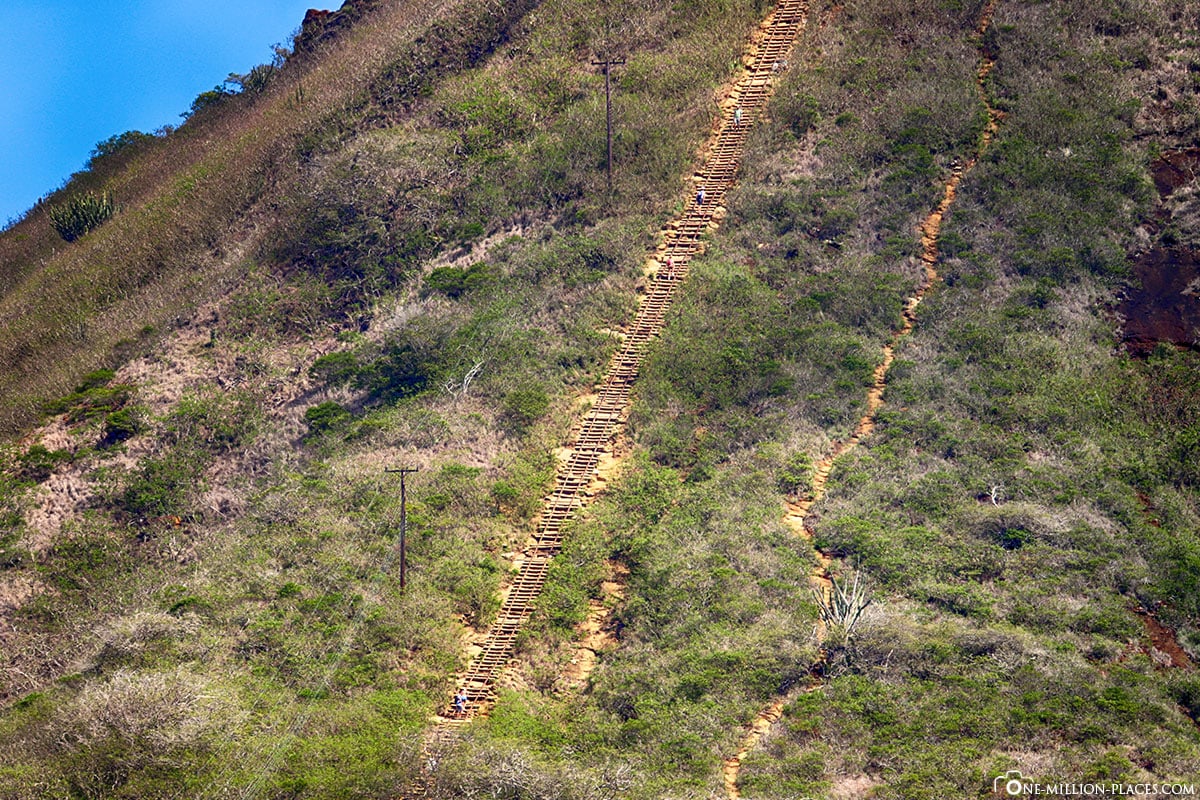 Once we arrived at the bottom we looked back again and couldn’t believe that we really managed the hike with the slope. Anyone who has walked this trail knows what we are talking about… a great feeling! 🙂