A visit to the Brocken, the highest mountain in the Harz,is simply part of a holiday in the Harz. On the one hand, this can be done on foot via one of the many hiking trails, on the other hand you can also choose the slightly more comfortable option and “climb” the chunk with the nostalgic Brockenbahn. Many also opt for a combination of both, e.g. hiking high and driving down. We decided for the comfortable variant and drove from Wernigerode with the Harzquerbahn or Brockenbahn to Brocken, which was a great experience!

Things to know about the “Harzer Schmalspurbahnen”

The Harzquer-, Selketal- and Brockenbahn are operated by Harzer Schmalspurbahnen GmbH, based in Wernigerode. The railway company has a 140 km long network of mostly steam-powered narrow gauge lines in the Harz, which is now considered to be the largest connected network in Europe under steam. The railway lines, especially the Brocken Bahn, are now mostly used by tourists and hikers; actual commuting plays a rather minor role. In addition, the railways are also active in freight transport. 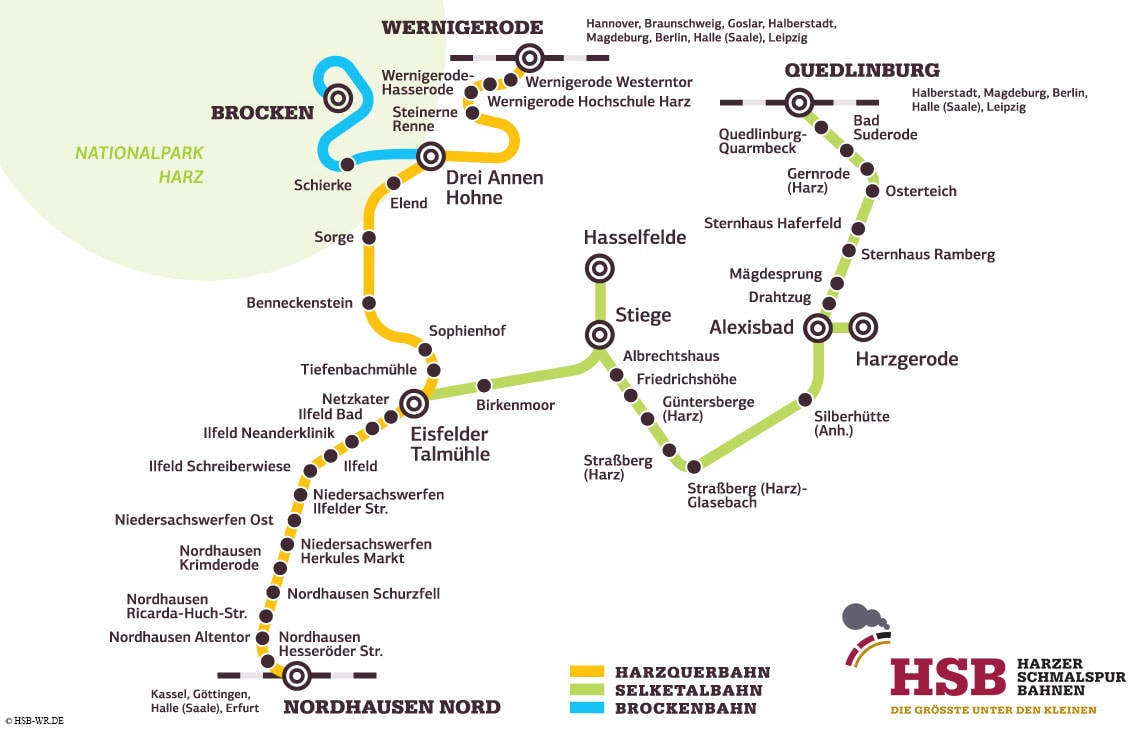 The route network of the Harz narrow gauge railways

With the steam locomotive from Wernigerode on the Brocken

The first steam locomotive to run from Wernigerode to Brocken is at 9.10 in the morning. Since we wanted to take advantage of the day and hoped that there were not so many tourists on the way at this time, we decided to use this connection. If you want to drive with a steam locomotive, you should thoroughly check the connection overview, as a steam locomotive does not go up the chunk at any time.

Train tickets can be purchased either online or on site at the station. The so-called “Brockentarif” always applies to the trip to the Brocken, which costs 47 EUR per person (as of July 2020). It is also important to know that this is a uniform fare, i.e. it does not matter where you enter – the price is not reduced. There are also special afternoon rates at a discounted rate of 41 EUR. If you want to hike up or down to broken and only need one ride, it costs 31 EUROS.

The train station in Wernigerode

We parked our car in the parking lot Feldstraße behind the train station (link in Google Maps) free of charge. We got this tip from our hotel and it saved us the parking costs that accrue in the parking lots in front of the train station. We were about 30 minutes before departure at Wernigerode station, because we wanted to go to the visitor platform before the departure to take a look at the station area of the Harz narrow gauge railways. And it was really worth it, because the employees were already busy cleaning “their” 700 hp steam locomotives and bringing them to a high gloss. In addition, we were able to observe the entry of our train.

The section of the train route in Wernigerode

Just in time at 9.10 a.m., our steam locomotive started to move and tug through Wernigerode. We first looked for a quiet place on the train, but later we were actually out on the intermediate platforms all the time, to get the right steam locomotive feeling with all the noises and to take photos and videos. That was really great and we can only recommend it.

On the way to the Brocken, the steam locomotive from Wernigerode travels a distance of 34 km and passes through various stations. After a short stop at Wernigerode-Westerntor station, the journey goes through a long piece of forest to the station in Drei Annen Hohne. Only from the station “Drei Annen Hohne”, the penultimate station before the Brocken, is it also called “Brockenbahn”. Before, it was called the “Harzquerbahn”.

The railway station in Schierke

From Drei-Annen-Hohne station, the Brockenbahn, with 585 metres of altitude, manages its steepest stretch over a distance of 19 kilometres. The higher we went by train, the more the cloud cover was ripped open and the sun came out. We were already a bit worried that we would catch bad weather because the forecasts were nuptit good, but that was not the case. But before we go to the last section to the Brocken, there is another longer stop at Schierke station.

If you want to photograph the Brockenbahn in beautiful surroundings, it is worth a longer stop in Schierke. Just get off and take one of the next trains to continue 🙂 To take a nice photo with the Brockenbahn in the forest, you simply have to walk about 400 meters along the tracks from Schierke station and wait for the next train. Both directions offer great photo motifs! 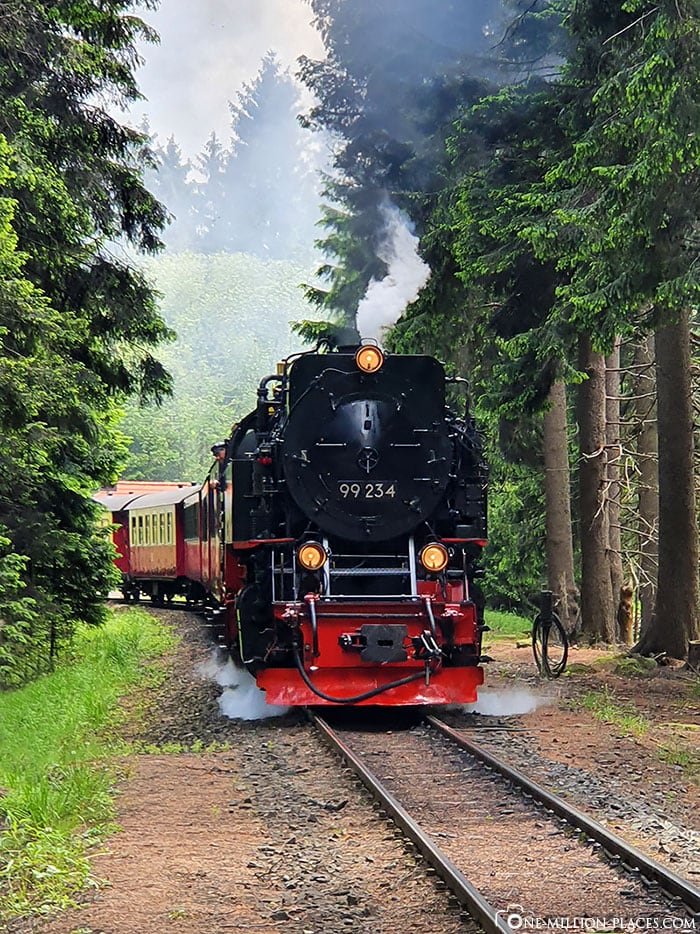 The Brockenbahn in the Harz National Park

The train route to the summit of the Brocken

On the trip we always had fantastic views into the Harz National Park. However, we were somewhat frightened by the many dead trees on the left and right of the railway line, some of which stretch over larger areas. These are fallen trees due to storm damage, but also broken trees due to drought, heat and lack of rainfall. The perfect breeding ground for a mass propagation of bark beetles, which then infest the pre-damaged spruce trees and damage them.

After 1 h 48 min we reached our destination: the Brockenbahnhof, which with its 1,125 meters of altitude is the highest station of all German adhesion narrow gauge railways. What an eventful ride!

The 1,142-metre-high mountain in the Harz

After we had reached the top with the Brockenbahn, we used the time until the departure of our train to explore the area around the Brocken summit. And this in the best weather, although the Brocken – which is popularly referred to as “Blocksberg” – is a place of extreme weather conditions due to its exposed location in the north of Germany. What luck we have! 🙂

The history of the Brocken 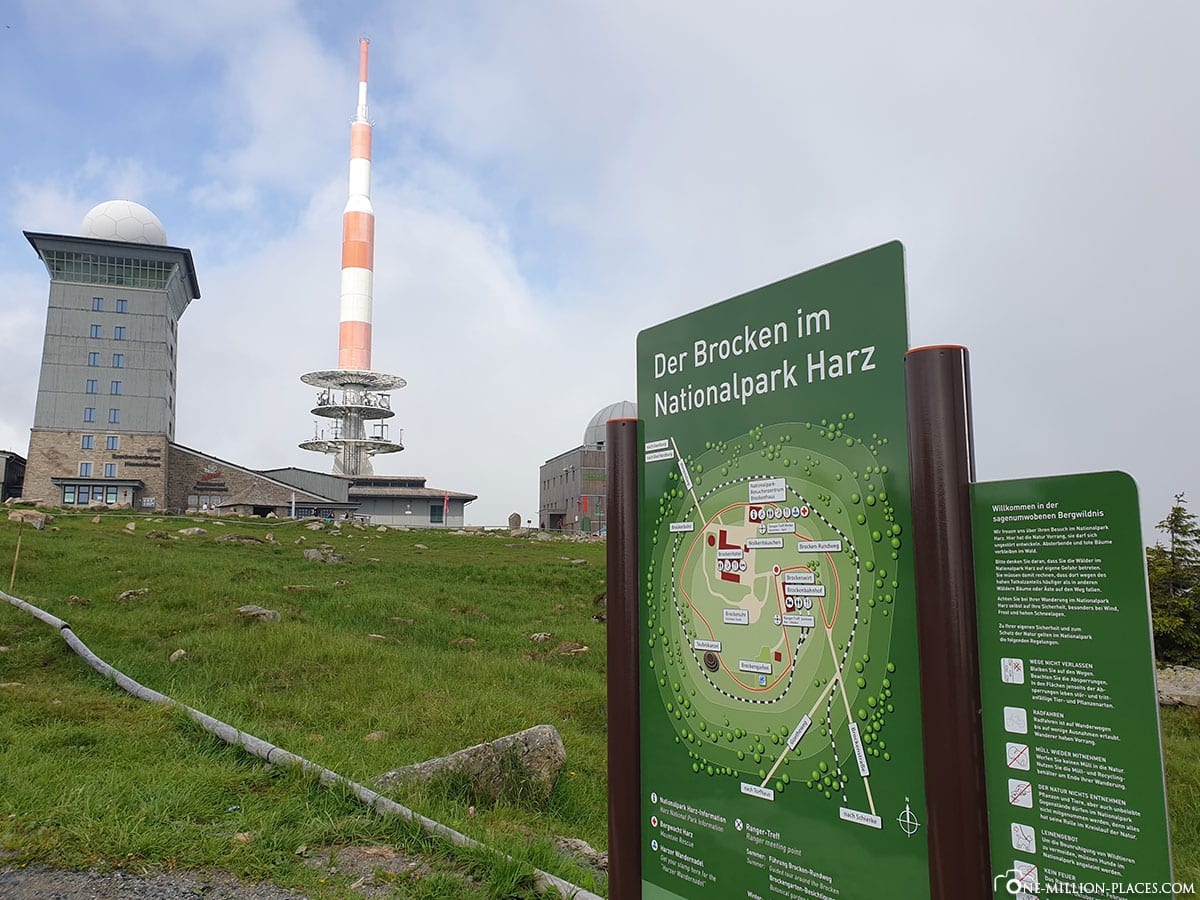 The Brocken in the Harz National Park

The first point of contact on the highest mountain of the Harz was for us the summit stone,on which the height of the chunk is indicated (1,142 m). A perfect motif for a beautiful souvenir photo! The summit stone is at the center of a circular Brockenuhrsurrounding it. In this, there are 48 bronze plates embedded in the ground, bearing the names and distances of surrounding and distant places. On the summit there is also the Brockenhaus with a visitor centre of the Harz National Park, which provides information on the history of the Brocken in an exhibition, the Brockenhotel and a restaurant.

We first walked along a part of the summit circuit and enjoyed the great view of the surroundings. With very good visibility, you can even look up to the Rothaargebirge (164 km distance) or the Rhön (152 km distance). The visibility was not so good with us, but there was a great panorama 😊 Shortly before the arrival of the next steam locomotive we were looking for a nice place near the Brockengarten, from which we can take some photos of the rolling locomotive. And that worked great! 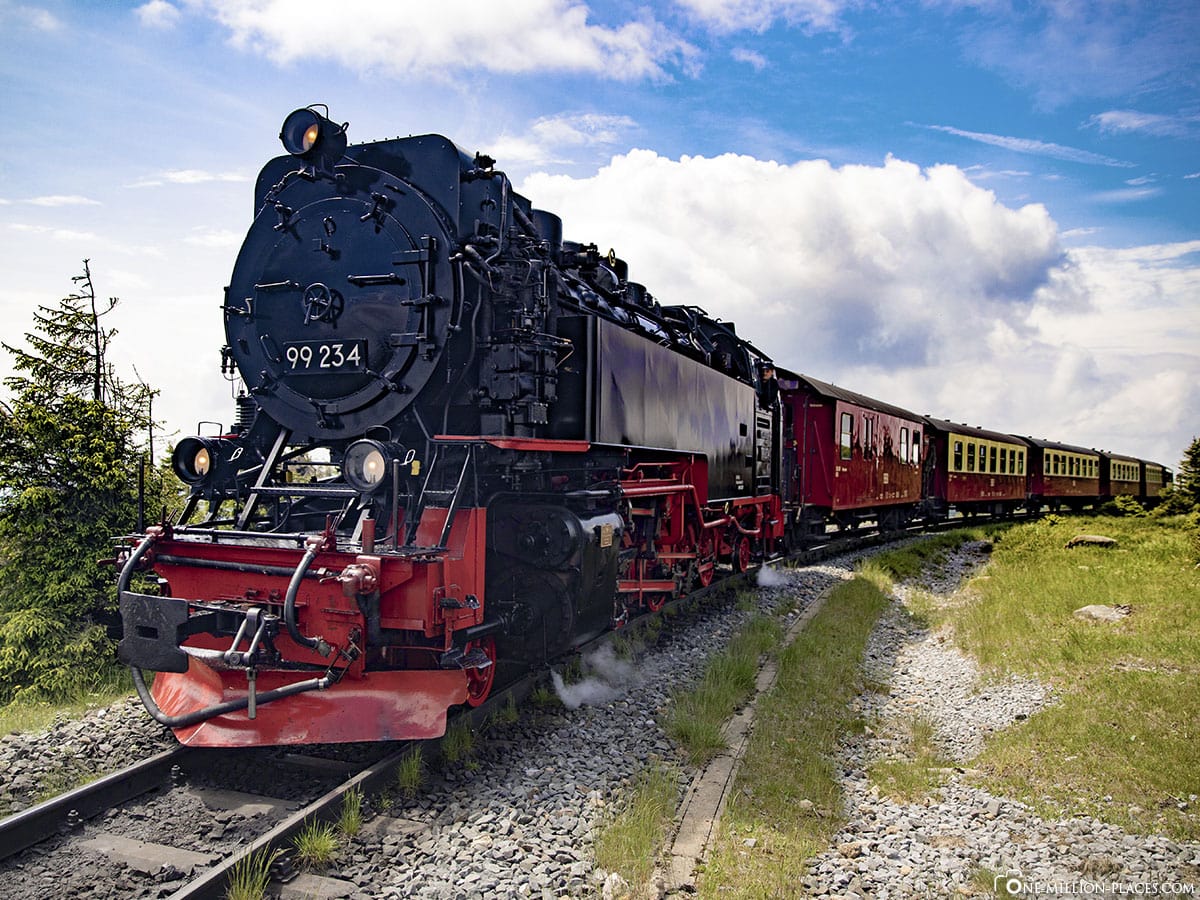 The Brocken railway in the Harz

As soon as the train arrives at the Brockenstation, one can watch beautifully how the steam locomotive is placed from the front to the other end of the train.

After a relaxing time on the summit, we made our way back to Wernigerode – with many new experiences & impressions.