We were especially looking forward to our trip today. Because on the one hand we went high up on the Suspension rope bridge Titan-RT, and in the Hermannshöhle deep down into the Harz mountains.

Our first port of call was the Rappbode Dam, which is located in the city of Oberharz am Brocken. The dam was built between 1952 and 1959 and consists of a dam, a waterworks, a hydroelectric power station and the 3.9 km2 Rappbode Reservoir. At 106 m high, it has the highest dam in Germany and is one of the two largest drinking water dams in Germany.

Both a country road and a pedestrian path lead through the dam. The crossing on foot is worthwhile because on the one hand you have a fantastic view of the Rappbode reservoir and on the other side to the suspension bridge Titan-RT and the reservoir of the dam Wendefurth.

About 50 m parallel to the Rappbode Dam, the Pedestrian Suspension Bridge Titan-RT, which opened in 2017, is located. The bridge spans the Rappbode Valley with an incredible 458 m and hangs at a height of 100 m above the reservoir of the Wendefurth Dam. This makes it the longest suspension rope bridge in Germany and one of the largest of its kind in the world. Adrenaline guaranteed! But you should also be free of dizziness 😉

We parked our car in the parking lot P1 behind the tunnel of the dam (link in Google Maps). This car park is the direct car park at the Rappbode Dam and from here the suspension bridge is accessible on the shortest route. Parking charges for up to 3 hours are EUR 2 and a day ticket costs EUR 4. Entrance tickets for the suspension bridge can be obtained either at the ticket machines at the bridge portals or simply at the visitor centre, which is located at the P1 car park. Admission costs EUR 6 per person (as of July 2020).

Since we were at Titan RT at the time of the Corona pandemic, there were certain requirements – this is the only way to ensure that the visits take place in compliance with protection and hygiene rules. On the one hand, the opening hours have been reduced from 8 a.m. to 10 p.m. to “only” 9 a.m. to 6 p.m. On the other hand, a one-way street system has been introduced, i.e. the bridge is entered via the north portal and left via the south portal. Before Corona, both portals could be used as input and exit.

After we got our tickets in the visitor center, we walked to the north portal – from the parking lot it takes less than 5 minutes. Since we were at the bridge in the late afternoon, luckily there wasn’t that much going on, so we could walk slowly over the bridge and take many photos in peace.

In between we had to hold on again and again, because it was a bit shaky. Fortunately, we don’t mind that at all. It is also worth to stop from time to time and enjoy the view into the surroundings: on the right you can see the majestic dam of the Rappbode Dam and on the left the reservoir of the Wendefurth Dam. A great panoroma – especially with the perfect weather we had!

After leaving the bridge over the south portal, we walked relaxed over the dam of the Rappbode Dam back to the parking lot. It is best to turn right before the tunnel onto the small hiking trail and do not walk back through the tunnel, because from the hiking trail there is once again a great view of the Rappbodetal. 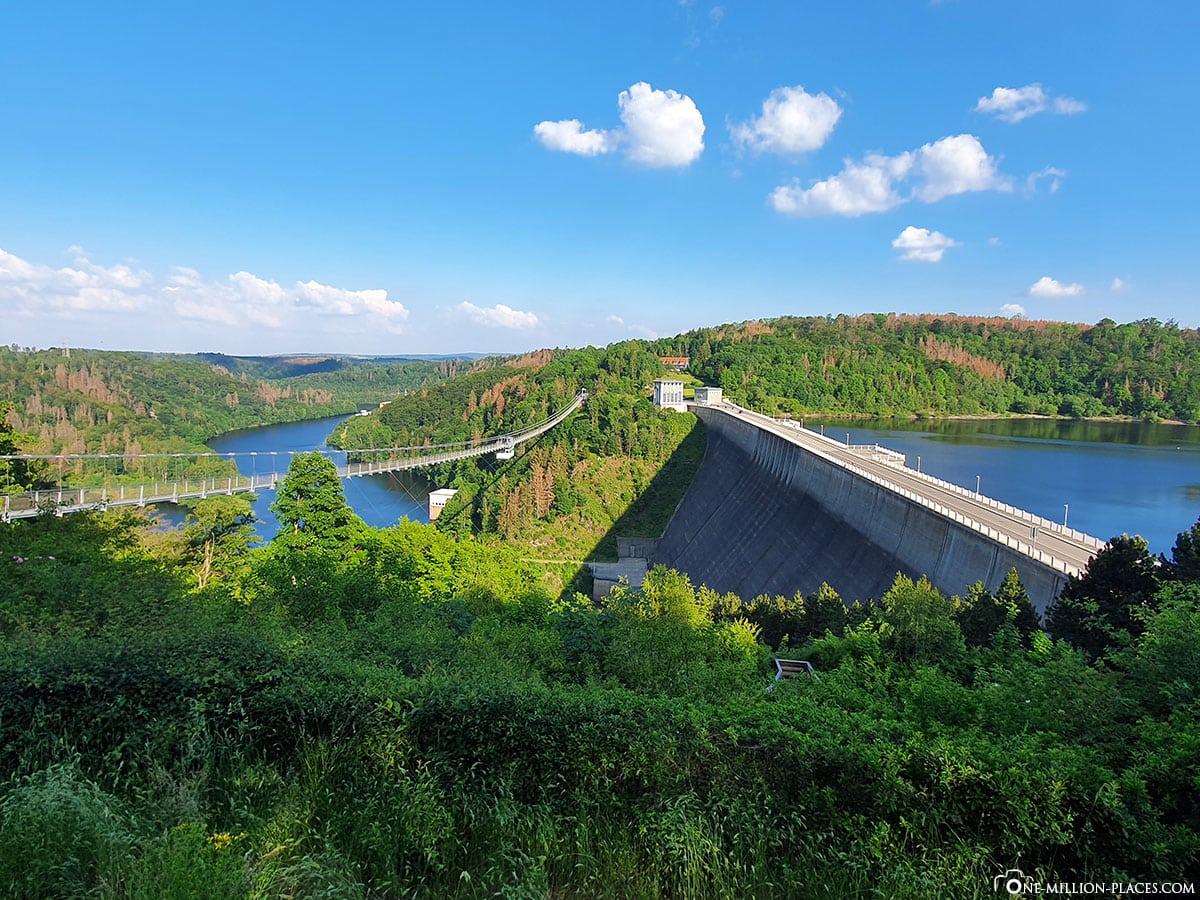 If the footpath over the Titan-RT is not enough and if you are still looking for the extra adrenaline rush, there are several other ways to push your pulse up a bit:

In the middle of the bridge there is the possibility to experience a 75 meter deep pendulum jump by gigaswing alone or in pairs in tandem. During wall running, one walks 43 m upside down at the dam of the Wendefurth Dam into the depth. With the 1,000 m long megazipline, the Rappbode Dam is the longest double-rope slide in Europe. With a speed of up to 85 kmh, you can swarm here about 120 m over the abyss to the finish point.
No matter what activity you choose, fun is guaranteed by everyone!

Only 5 km from the Titan-RT are the two Rübeland stalactite caves, which we really wanted to look at.

Things to know about stalactite caves

The stalactite caves Rübeland, consisting of the Baumannshöhle and the Hermannshöhle, are located in the village of Rübeland, about 15 km from Wernigerode. Both caves are among the oldest and most famous show caves in Germany and are unique as geological natural monuments.

With its accidental discovery in the 16th century, the Baumannshöhle is considered to be the oldest show cave in Germany and has been offering organized cave tours since 1646. With the imposing Goethesaal – named after its most famous visitor Johann Wolfgang von Goethe – it has Germany’s most beautiful underground natural stage, where concerts and theatre performances take place regularly. The Hermannshöhle is only about 300 m from the Baumannshöhle and was discovered by chance during road works in the 19th century. It impresses with its crystal chamber, cavities up to 50 m high and Germany’s only grotto nooses.

Actually we wanted to visit both caves, but unfortunately the Baumanns cave was still closed due to the Corona pandemic. We were all the more pleased that the Hermannshöhle was again accessible to visitors. 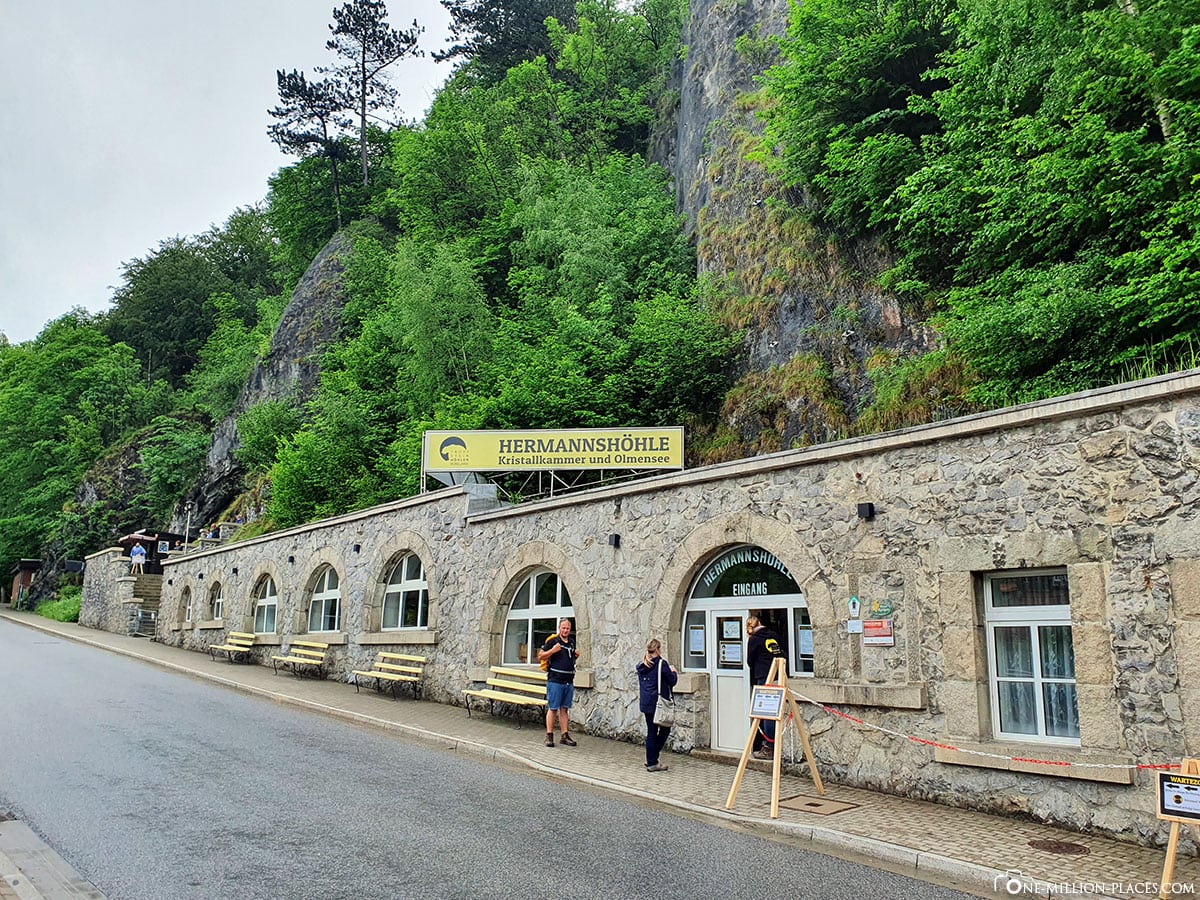 We parked in a paid parking lot near the cave. There was a 2.5-hour cave ticket at the ticket machine, which is also quite sufficient in time. The entrance to the cave is located directly on Blankenburger Straße. When we had our tickets, we read through the most important information for access to the cave before we started our tour. Due to the Corona pandemic, the operators of the Hermannshöhle have considered a new concept for access to the cave in order to be able to comply with all distance and hygiene regulations in the best possible way:

The cave can only be visited without a guide, i.e. you walk through it alone. Before Corona, the cave could only be entered by a guided tour. A reduced ticket price of EUR 6 per person is offered for a visit to the cave. Tickets can be purchased at the box office or online. Entering the cave is only allowed with a mouth-nose protection, which you have to wear all the time. For the first time, there are two photo points in the cave where photography is permitted. Otherwise there is a ban on photo and video in the entire cave! At regular intervals, employees are placed in the cave, who pay attention to the distance rules and, if necessary, give clues.

When we entered the cave, we noticed the temperature difference compared to outside: in the cave there is a temperature of between 8° and 9°C all year round, so warm clothes are highly recommended. Since you also walk several steps in the cave and the floor is partly wet, sturdy footwear (instead of sandals or flip-flops) is advisable.

We liked our individual tour through the Hermannshöhle very much. We were able to discover many dripstones, both stalactites and stalagmites as well as stalagates. Some of the cavities were up to 50 m high, which was very impressive. The absolute highlight for us was the sparkling crystal chamber,which was created due to the calcite crystals that occur at this point. Over a narrow corridor you could see crystal-like dripstones on the left and right hand, which have taken on quirky shapes and figures. For example, a formation looked like the lime sinter terraces in Pamukkale. Another “attraction” in the Hermannshöhle is the Olmensee, in which Germany’s only grottonolme live. Since they were during our visit just in the mating and breeding season and one did not want to disturb the animals, the lake was not illuminated, so unfortunately we could not see any grottoes. It took us about 45 minutes to tour.

We would have liked to have taken more time at one point or another, but were then informed by employees that we should go further quickly – due to the distance regulation.

From the Hermannshöhle it is worth a short detour to the Königshütter waterfall,which was artificially created in connection with a former quarry in 1994. The waterfall plunges from a height of about 12 m into the depths via a rocky edge – usually with a rather small amount of water. Since it had rained a lot on the day of our visit, there was a little more water. Directly below the waterfall there is a small green area with a rest and barbecue area. 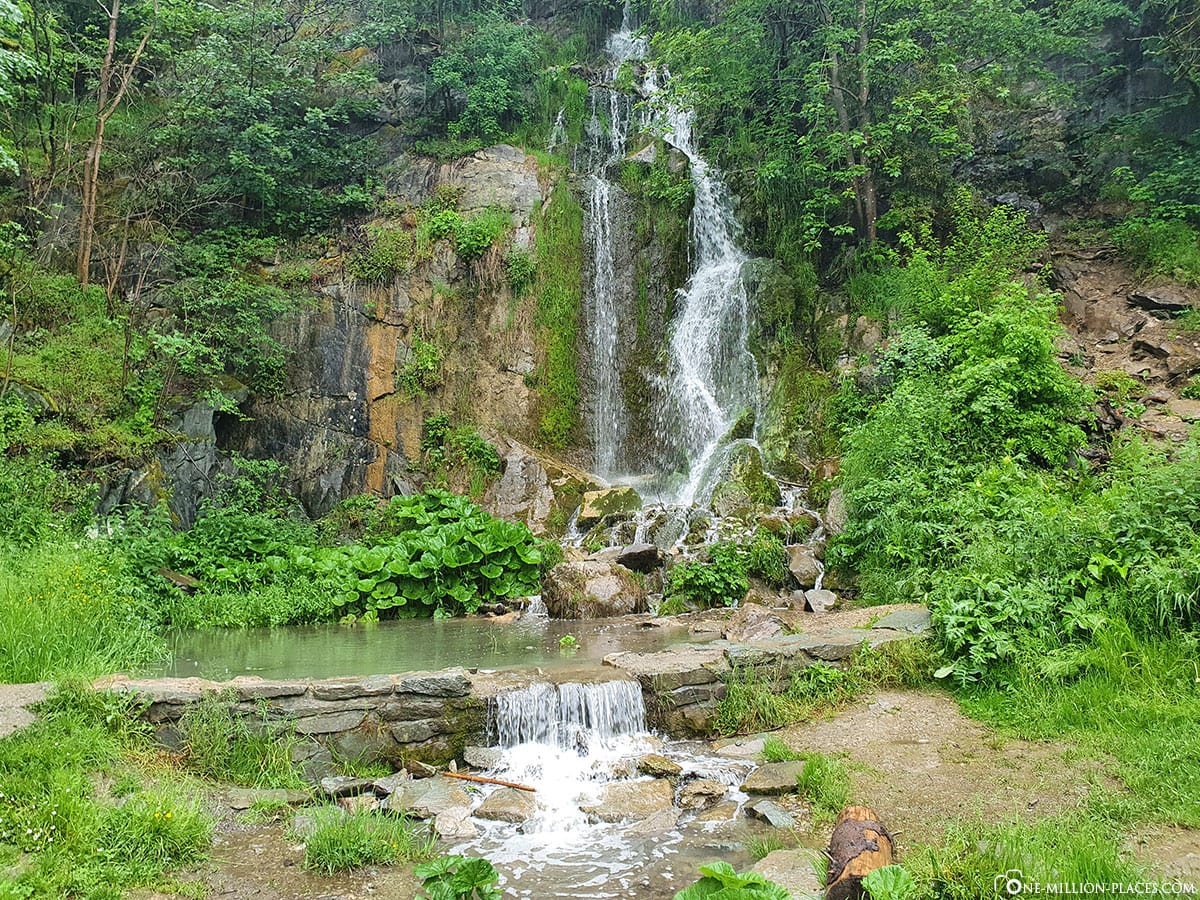 Königshütter Waterfall in the Harz

We had been really looking forward to the visit of the Blue Lake, which is only 3 km away from the Rübeland stalactite caves, because we had already seen many pictures of the bright blue lake on the Internet, which was artificially created due to the closure of a quarry.

When we arrived at the lake, however, we were very disappointed: the lake resembled a pool with extremely little water and no blue color at all. What a pity!

We then researched the reason for this and found out the following: The lake is fed by several karst springs and is saturated with calcium, which causes suspended matter and algae to sink to the ground. Due to this natural phenomenon and the clean water, the lake glows azure in spring. But unfortunately only at this time! Because in summer the water turns green, because the suspended matter and algae increase again – due, among other things, to bathers. In late summer and autumn the water seeps in and in winter it can even dry out before the cycle starts again in spring.

Hence our tip: Visit the lake best in spring, everything else unfortunately makes little sense.