Wernigerode, one of the most popular cities in the Harz, has all sorts of attractions to offer visitors: a historic town centre, elaborately restored and colourful half-timbered houses as well as an impressive castle. On a walk through the city we were able to discover the most beautiful sights.

Things to know about Wernigerode

Wernigerode is a state-recognized resort on the northeastern flank of the Harz and has about 33,000 inhabitants. The German writer Hermann Löns coined her nickname ” Die Bunte Stadt am Harz “(The Colorful City onthe Harz), which is still the city’s motto, towards the end of the 19th century because of the many colourful houses.

Tourists staying in Wernigerode must pay a tourist tax of EUR 2.80 per person/day to cover the expenses used for tourism. In return, you get the booklet “Wernigerode Ticket” as a guest, in which you will find lots of coupons and discounts for attractions and sights. Buses and trams in the district of Harz can also be used free of charge.

What to see in Wernigerode

For exploring Wernigerode and the surrounding area, we took a few days and stayed at the Regiohotel Schanzenhaus for three nights. Although the hotel is not located in the centre of Wernigerode, it is quietly located, offers free parking and great value for money. The starting point of our city walk through Wernigerode was the parking lot Anger/Schloß (link in Google Maps), where we parked our car. From here it is only a few minutes walk until you reach the Breite Straße and thus the city center.

The centre of the old town is the historic market square with the picturesque town hall, which was first mentioned in 1277 as a playhouse and courthouse. Since the old town hall was destroyed in 1528 due to a fire, the former playhouse was converted into the present town hall and moved in 1544 with the city administration. It is also worth a look behind the town hall, because here is a very nice flower clock.

Another eye-catcher on the market square is the beautifully decorated Benefactor Fountain, which found its place here in 1848. If you look closely, you will see golden coat of arms signs at the upper and middle edge of the basin with names of people who have made a living for the good of the city. The listed Gothic House is located on the west side of the market square. The half-timbered house was first mentioned in 1360 and now houses a hotel.

A few meters from the market square is the Schiefe Haus on Klintgasse. Wernigerode was founded about 1,000 years ago on this small hill (“Klint”). Once a cloth factory, you can experience a piece of local history in today’s museum for just 1 EUR per person. On the site of an old mill, the house was built in 1680 as a walk mill for the cloth makers. Later, the building was used as a flour mill and residential building.

The special feature of the house is its very visible angle of inclination. With a slope of 7 degrees, the house is twice as crooked as the famous tower in Pisa. The background to the inclination is the current of the then still open moat, which washed over the foundations of the building and then lowered the east facade.

The colourful half-timbered houses in the Heideviertel

In the old town of Wernigerode there are an unbelievable number of beautiful half-timbered houses. Especially in the Heideviertel, which is located around the Hinterstraße, Mittelstraße and Heidestraße, some of the oldest half-timbered houses of Wernigerode, such as the “Oldest House” in Hinterstraße 48, which was built around 1400 and – like other houses in this district – were largely spared from the great fire in 1847. In front of the “Old House” there is a small square with a more than 500-year-old fountain, which was uncovered and reframed in 1998.

A walk through the Heideviertel is very worthwhile, because the old half-timbered facades and the cobbled streets exude a very special charm.

A steam locomotive paradise at the railway station in Wernigerode

At the train station in Wernigerode, the “steam locomotive paradise” awaits you. Here there is a great visitor platform from which you can take a look at the station area of the Harz narrow gauge railways. If you are lucky, you can see how the employees diligently clean “their” 700 hp steam locomotives and bring them to a high gloss before they leave the station with a foolish sound and a lot of steam.

From the old town you can reach the neo-Gothic Wernigeröder Castle by a walk or by the Wernigeröder Schlossbahn. We opted for the active variant and walked up to the castle via the small park on the city wall, which is located on the castle hill. It took us about 25 minutes to climb.

The Wernigeröder Castle towers high above the city and is very easily recognizable from a distance.

In 1213, the castle was first mentioned as “castrum”. Originally, the present castle was a medieval castlethat has undergone profound changes over the centuries. The Thirty Years’ War devastated the castle, so that in the 17th century the remaining remains of the castle were converted into a romantic residence castle. In the years between 1862 and 1885 a great historical reconstruction of the castle took place, which led to the castle becoming a guiding building of North German historicism. 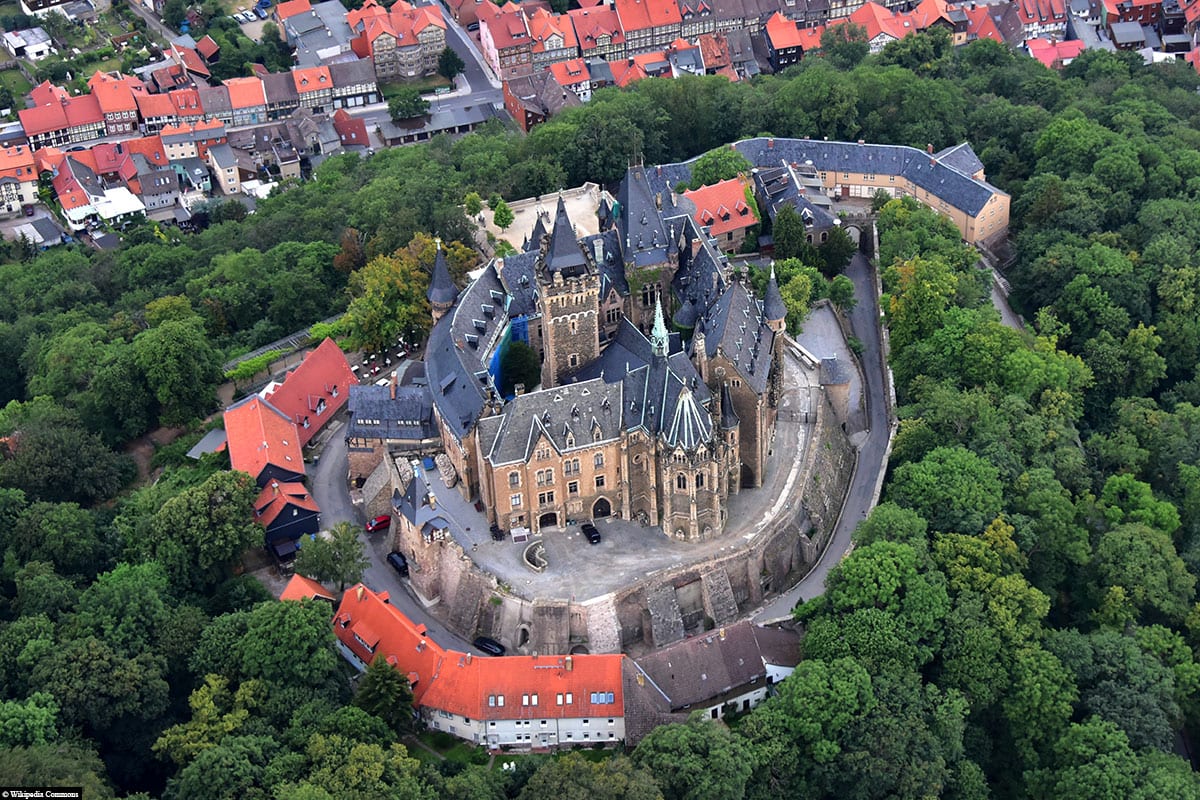 The grounds of the castle are freely accessible and very beautifully laid out. In front of the main facade there is a large square with lovingly laid out flower beds, seating and a fountain (including the Frog King 😉). From here you have a fantastic view of Wernigerode and the surrounding area.

Since we also wanted to look at the interior of the castle, we bought two tickets for 7 EUR per person. There are a total of two tours through almost 50 rooms, which give interesting insights into the home décor of the German high nobility in the second half of the 19th century.

In addition to the market square, the Heideviertel and the castle, Wernigerode has many other sights to offer:

The Krummelsche Haus is an impressive, listed merchant’s house in Breiten Straße with an ornately carved wooden facade. The baroque half-timbered house was built in 1674 and was named after its builder, the grain merchant Henricus Krummel.

Absolutely worth seeing is the “Smallest House” in Kochstraße 43, which can be viewed for 1 EUR per person. The house dates back to 1792 and was built in baroque half-timbered style. The builders at the time forced the house into a 2.95 m wide gap between two existing houses and thus saved themselves the side gables. When you enter the house, you first have to pull your head in, because the front door has only a height of 1.70 m. During the tour of the nearly 30 m2 house we were able to get a small insight into the former living conditions. It is inconceivable that the house served as a residential house until 1976 and that up to 11 people are said to have lived in it at the same time.

If you love tree cakes, don’t miss a visit to the Harzer Baumkuchenhaus. On the one hand, the building is already a real feast for the eyes and on the other hand you can enjoy coffee and tree cake specialities here.

Around Wernigerode there are other activities or places worth seeing, which we unfortunately did not manage in time. These include, for example, the Wernigeröder Fairytale Trail, the Christianental Wildlife Park or the Miniature Park, where more than 60 Harz sights can be seen.

A map of Wernigerode with all the sights

On the following Google MyMaps map we have mapped the most important sights of Wernigerode.