In search of beautiful old towns in Germany, we became aware of an article on the Internet in which Dinkelsbühl was named “Most Beautiful Old Town of Germany” by Focus Magazine due to the exceptionally well-preserved late medieval cityscape. A good reason for us to get in the car and visit the former imperial city.

Things to know about Dinkelsbühl

Dinkelsbühl is a town in central Franconia with about 12,000 inhabitants. It is an important tourist resort on the Romantic Road, the now internationally known German holiday route. The road stretches over 29 villages and 460 km – starting on the Main in Würzburg over the west of Franconia to Bayerisch-Schwaben, through a piece of Upper Bavarian territory to the Ostallgäu to Füssen.

The Old Town of Dinkelsbühl has been awarded the European Cultural Heritage Heritage By the EU’s European Heritage Label initiative. This state award is given to cultural monuments, cultural landscapes or memorials that are considered significant at European level. The special thing about Dinkelsbühl is that of the 780-house old town, almost 75% of the houses are older than 350 years.

The sights in Dinkelsbühl

We started our walk through the old town of Dinkelsbühl at the free parking lot P2 “Stadtmühle” (link in Google Maps), which is located outside the city wall directly at the Nördlinger Tor. There is even a free public toilet and the way to the old town is not far away. In the old town, by the way, you can park free of charge in designated parking spaces for 60 minutes with a parking disc. Since this was not enough for us to explore the city, we preferred to put ourselves on the other parking lot, where there is no time limit. 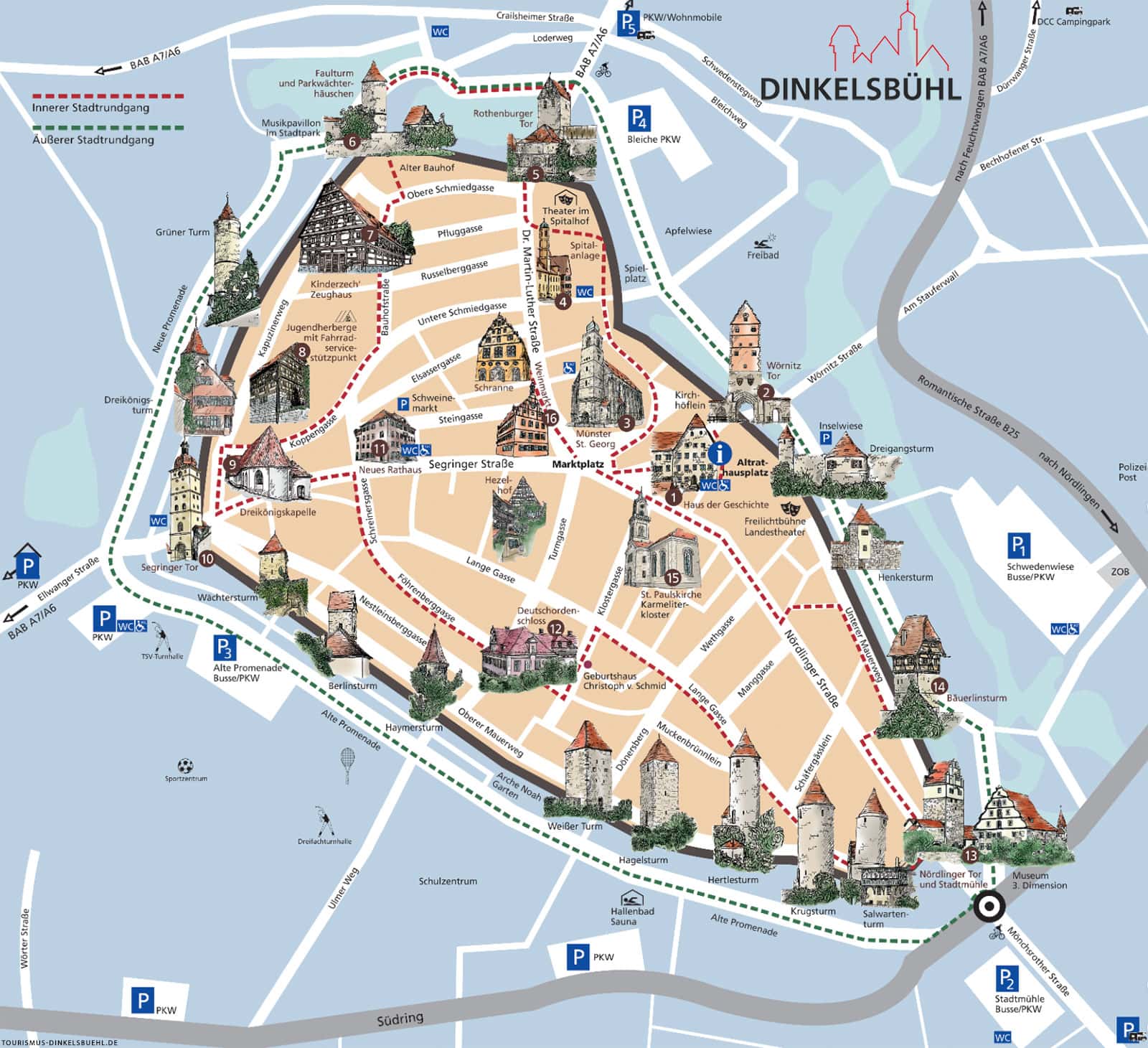 A map of the sights in Dinkelsbühl

The historic old town is surrounded by a completely preserved, about 2.5 km long city wall. The wall includes four gates (Nördlinger Tor, Wörnitz Tor, Rothenburg Gate, Segringer Tor) and several towers, of which we could not see all of them during our tour, but some of them. The fact that the city wall is still so beautifully preserved today is the merit of King Ludwig I of Bavaria and his monument legislation.

Leaving the old town to the north through the Rothenburg Gate, you will reach the Rothenburg pond,which is a beautiful green oasis right next to the city wall. The perfect place to relax and enjoy the scenery!

The central point in the old town is the market square with the wine market and the cathedral of St. Georg, one of the most important late Gothic hall churches in southern Germany, which was built between 1448 and 1499. The west side of the wine market is surrounded by beautiful, colourful gabled houses, including the Deutsche Haus, the former Schranne cereal store and the former Ratstrinkstube.

In contrast to other cities at that time, there was no central marketplace in Dinkelsbühl but market streets, which were reserved in individual sections for the trade in different products. In addition to the wine market, for example, there was also the board market, the harbour market, the bread market, the lard market, the pig market, the leather market and the cattle market.

The Zeughaus of the Dinkelsbühler Kinderzeche was originally a granary at the beginning of the 16th century. Since 2007, the half-timbered building has been used as a storage room for the Kinderzech fundus. The youth hostel on Koppengasse is housed in a beautiful old half-timbered house, which used to also serve as a granary. Today, up to 100 people can stay here. At the Segringer Tor there is the small, at first glance somewhat inconspicuous Dreikönigskapelle from 1378. Today there is a memorial in the church for the victims of the Nazi regime. At the pig market we discovered the New Town Hall, built in 1733, where the city administration has been located since 1855.

What we have noticed very positively is the fact that shops within the old town are not allowed to hang advertising signs or illuminated displays on their shops. The inscriptions of these shops all follow the same writing style and were painted directly on the houses. In addition, there is a predetermined window design and the roofs of the old town houses must be covered in red. Only through such strict building regulations can the appearance of the old town be preserved in the future.

We really enjoyed our old town walk through Dinkelsbühl. With its many cobbled streets and colourful houses, the city has made a very comfortable impression on us. 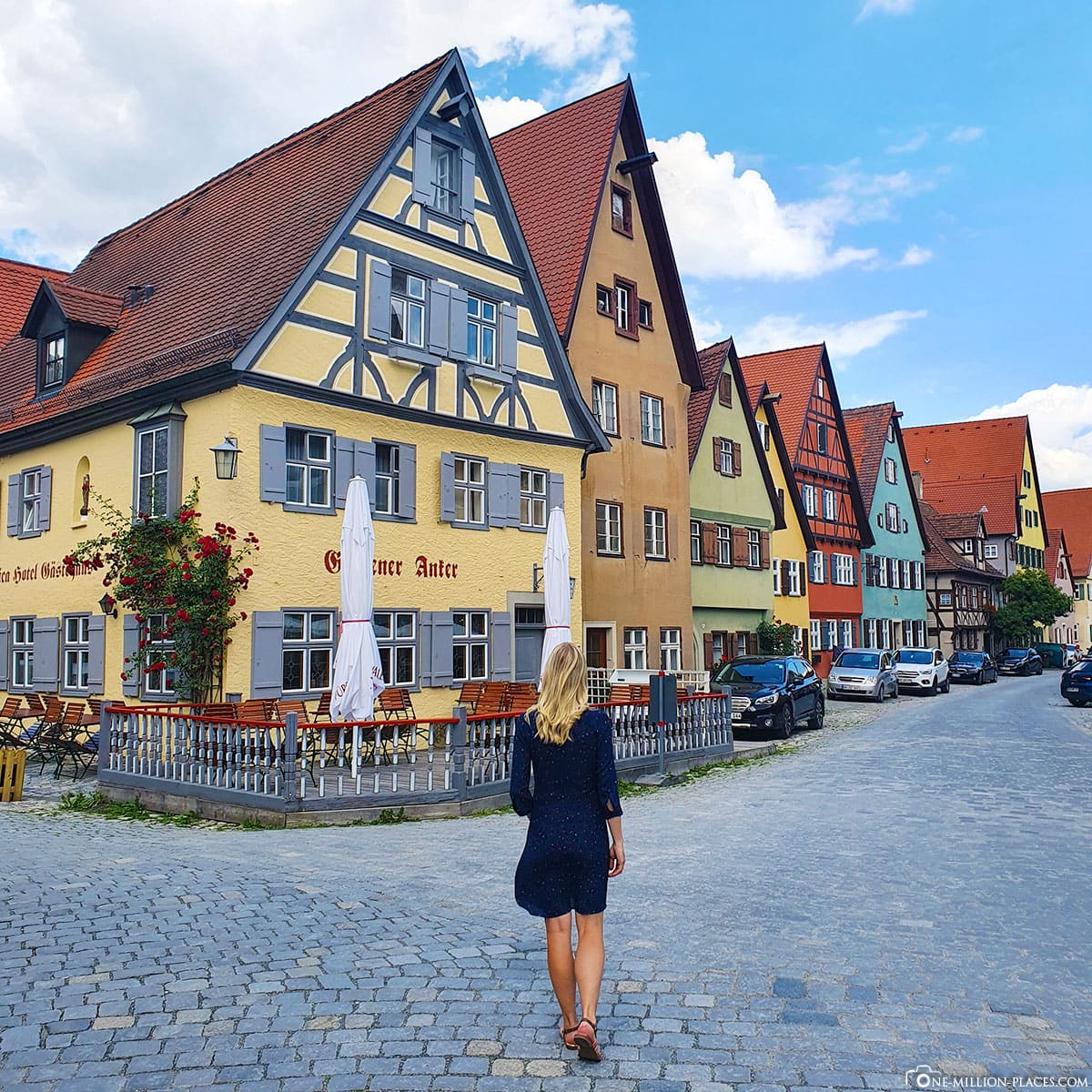 A walk through the old town of Dinkelsbühl