The fairytale castle Lichtenstein has been on our bucket list for a long time, after we had seen so many beautiful photos of it on Instagram and on the internet. Since there is still relatively little going on at the German tourist hotspots due to the Corona pandemic, we took the opportunity in July and paid a visit to the castle.

Lichtenstein Castle – The fairytale castle in the Swabian Alb

Lichtenstein Castle is located in the Swabian Alb in Baden-Württemberg and can be reached from the nearest largest town of Reutlingen in about 30 minutes. Not far from the castle there is a paid parking lot directly at the Schlossschenke, where you can park your car for 2 EUR. From here you can reach the castle entrance within a few minutes on foot. In the summer months the castle is open from 9 a.m. to 5.30 p.m., in the winter months only from 10 a.m. to 4 p.m. In the months of January and February the castle is completely closed.

At the cash register you can decide whether you only want to visit the castle complex (3 EUR per person) or also want to do a guided tour of the castle (9 EUR per person incl. castle courtyard). We chose the latter because we were quite curious about what the castle might look like from the inside. Drones are prohibited on the entire site of the castle, including the castle park and the parking lot. Also flying and flying over is not allowed.

The story of Lichtenstein Castle

A lichtenstein castle was built on the site of the present castle around 1390, which was considered one of the most fortified of the late Middle Ages. In the following centuries, the complex was partly used only as a forest house and gradually fell into disrepair. In 1802, a princely forest and hunting lodge was built on the ruins of the castle, which served as a hunting lodge for the King of Württemberg.

Wilhelm Graf von Württemberg, later Duke of Urach, acquired the land in 1840, had the forest house to be worn to the foundations and built the new Lichtenstein castle on the foundations of the former knight’s castle. He was inspired by the medieval novel Lichtenstein by the Romantic writer Wilhelm Hauff. 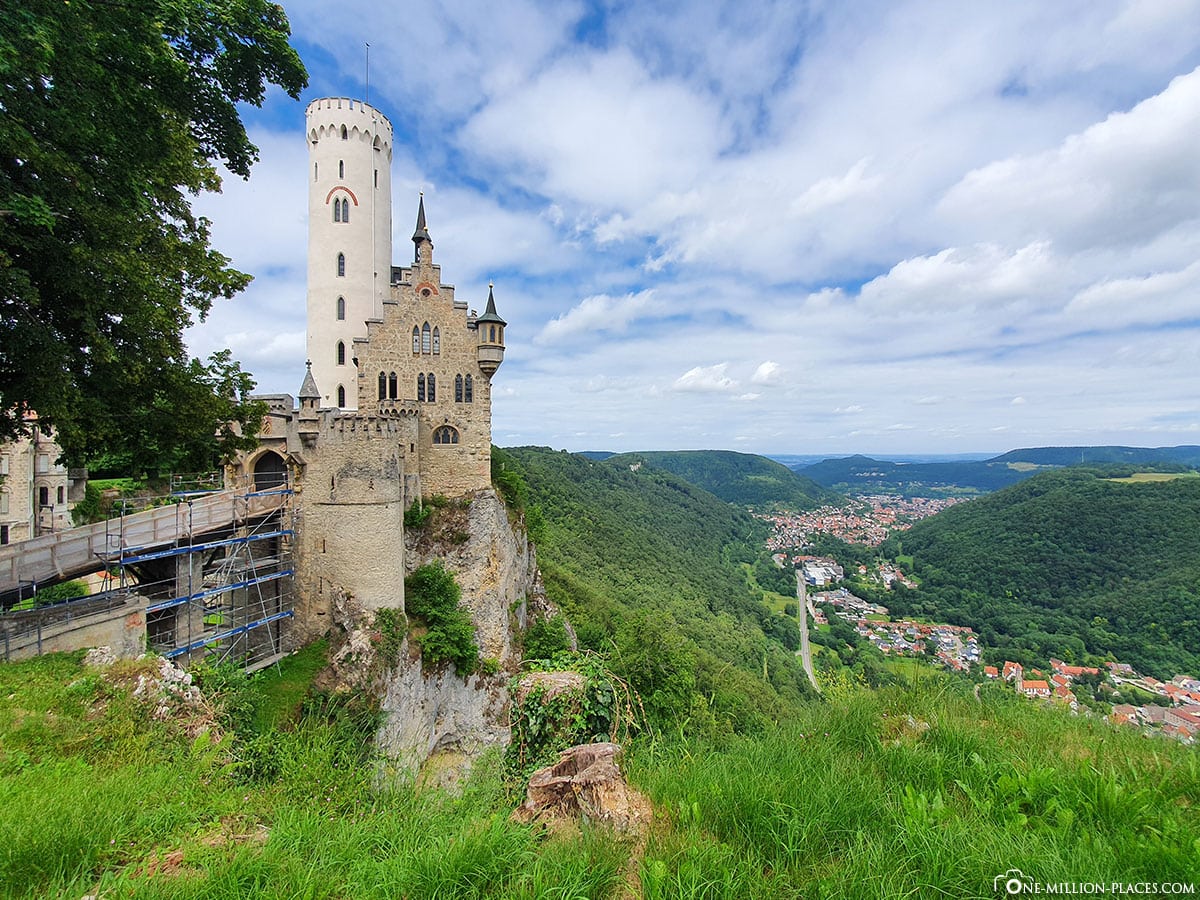 Lichtenstein Castle is located at an altitude of 817 metres above sea level. NN above the village of Honau and the valley of the Echaz, a small tributary of the Neckar. The castle was given its nickname “Fairytale Castle of Württemberg” because it allows the romantictous to live on in its architectural style and furnishings. Before our tour of the castle started, we had enough time to look around the castle grounds. The castle complex is divided into three areas: 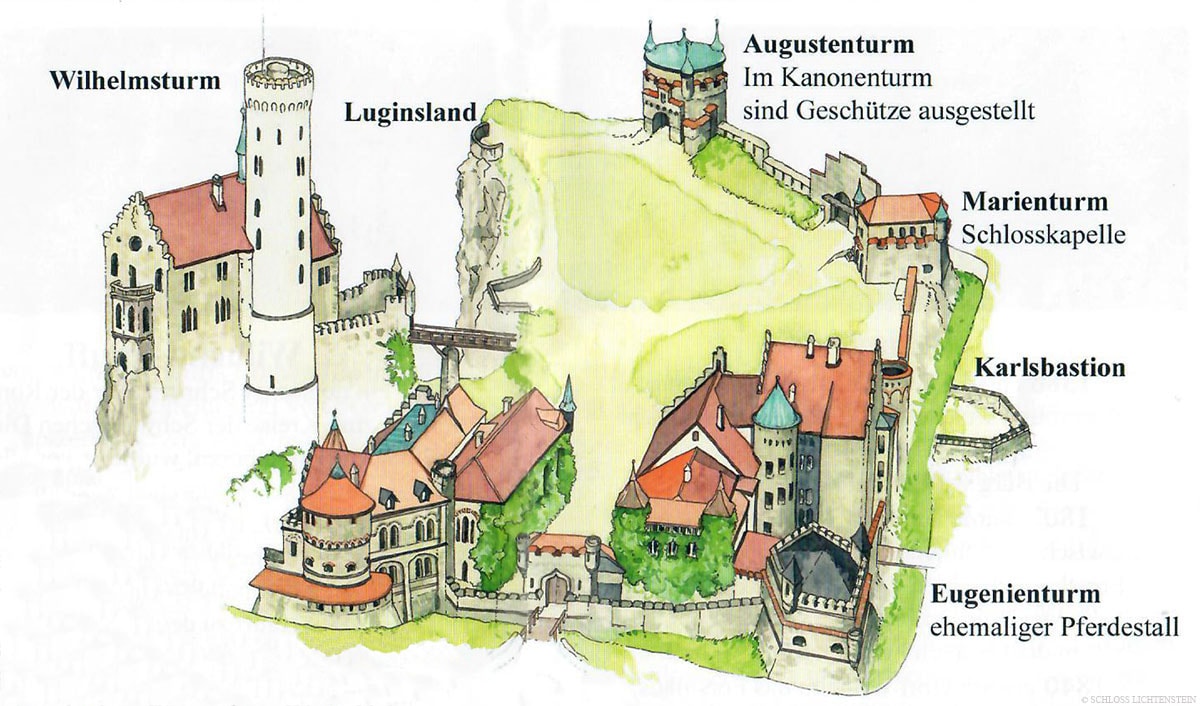 A map of Lichtenstein Castle

The Castle Park: The extensive castle garden, which opens after the castle courtyard, is bordered all around by a wall.

The castle: The actual lichtenstein castle stands sublimely on a free-standing rock spur. In the past, only one drawbridge crossed the abyss; today there is a fixed, walk-in bridge.

A guided tour of the castle

Guided tours of the castle take place continuously every 20 minutes. At the cash register we had received a specific time, at which we should gather in front of the bridge. The groups now consist of a maximum of 10 people in Corona times and it is necessary to wear a mouth-nose protection during the tour.

After our castle guide welcomed us, we walked over the bridge to the castle. Here there is once again a small castle courtyard, where she gave us general, interesting information about the history of the castle. Afterwards we went to the ground floor, where we could visit the Waffenhalle with a medieval collection of armor and weapons, the castle chapel with stained glass and paintings as well as the rustic drinking room with murals and a collection of drinking vessels (including a 1.93 m champagne glass!). Our tour continued to the first floor, where the Royal Room, the Coat of Arms Room, the Bay Chamber and the Knight’s Hall – the largest and most beautiful room – are located.

In total, the very entertaining tour lasted about 30 minutes and is highly recommended. However, it should be noted that you are not allowed to take photos during the tour – we think that’s a great pity! Courtesy of the castle administration, we can show some pictures here.

In addition to Eltz Castle, Neuschwanstein Castle, Hohenzollern Castle or Schwerin Castle, Lichtenstein Castle is certainly one of the most beautiful castles in Germany ❤ 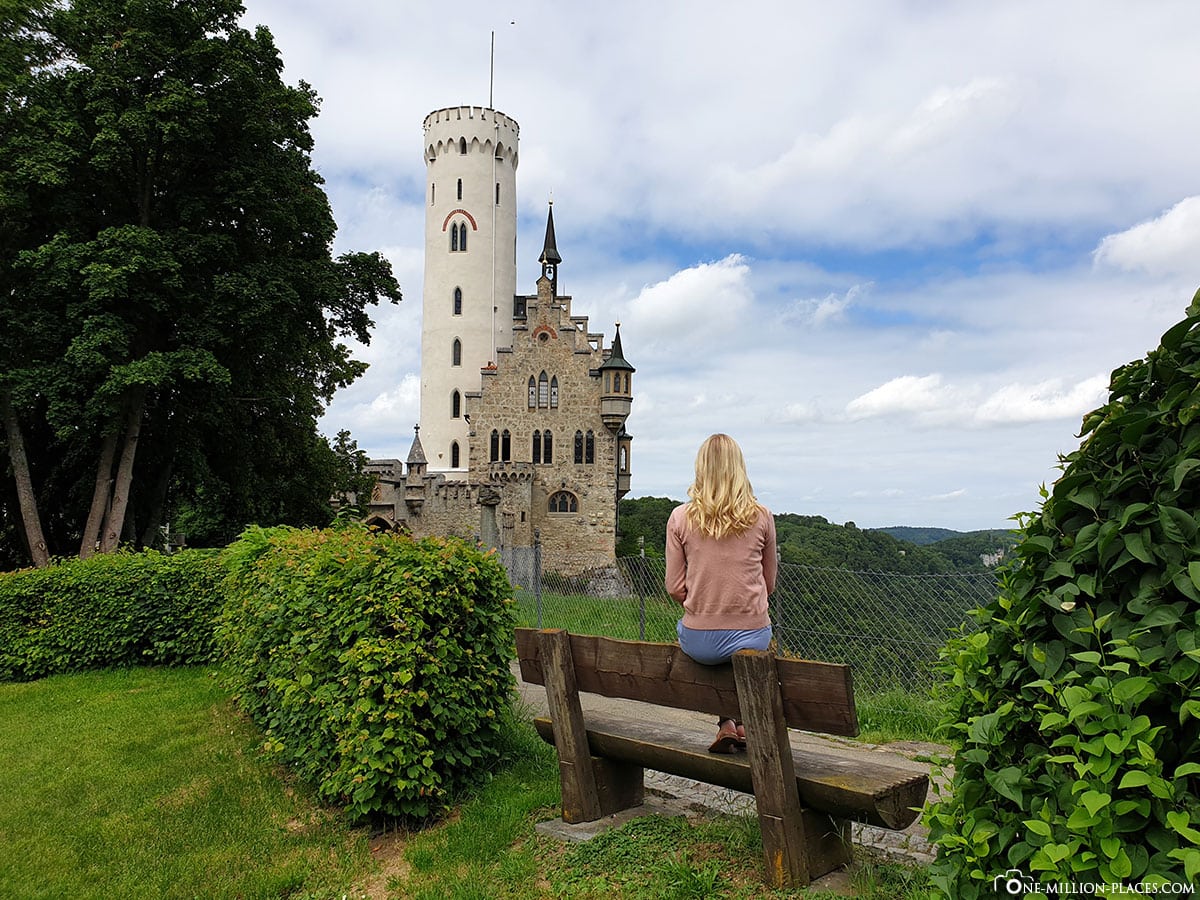