After a total of 17 hours flight (13 hours from Frankfurt to Taipei + 4 hours from Taipei to Palau) with China Airlines and 7 hours stopover in Taipei, we finally landed at Roman Tmetuchl International Airport in Koror on Palau on Saturday evening at around 6 pm.

Entry and visa requirements for Palau

The entry into Palau went super fast and went smoothly. As a German citizen, you have been traveling visa-free (at no additional cost) since 2015 and are allowed to stay in the country for up to 30 days (as of 22 April 2017). The passport must be valid for at least 6 months beyond the stay. However, it is important to show your return ticket when entering the country. Unfortunately, no one told us that. We had only stored our tickets online and since the internet at the airport did not work, we had nothing to show for immigration. Luckily, we had a very nice official who finally waved us through. It is best to print the return or onward ticket in advance.

Things to know about Palau

The island state of Palau, which belongs to the island region of Micronesia, is located in the western Pacific Ocean and consists of hundreds of small islands. On the world map, Palau is located about 800 kilometers east of the Philippines and 3,200 kilometers south of Japan. The archipelagos of the Palau Islands consist of a total of 356 islands,the largest of which is Babeldaob with 396 km2. Only eleven of the islands are inhabited, however.

Palau was German territoryfor 15 years. In 1899, Spain sold the archipelago to the German Reich at a bargain price, and the South Seas colony became part of the then imperial protected area German New Guinea. Until the First World War, Germany, among other things, dismantled phosphate here. In 1914, Palau was left to the Japanese during World War I, until they were expelled by the United States in World War II after heavy fighting. Only since 1994 has Palau been independent and thus one of the youngest states in the world. In the absence of its own local currency, the US dollar is used in Palau. The official languages are Palau and English, but some other Micronese languages are also spoken.

The only real city on Palau and at the same time the economic center is the former capital Koror. It is also home to 2/3 of the inhabitants. In 2006, the capital was relocated to Melekeok on the main island of Babeldaob. Palau has only about 20,000 inhabitants, but funnily enough, 16 states.

The best time to visit Palau is from February to April. It rains the least here. In general, however, the tropical island world can be visited all year round. Temperatures are usually between 23 and 32 degrees. 75 percent of tourists come from Japan, Korea, China and Taiwan.

Palau is best known for the fantastic world of the so-called Rock Islands. The Rock Islands are tropically overgrown mini-islands that protrude from the sea like mushrooms. When taking a boat ride through this island world or on a sightseeing flight, breathtaking sightsarise together with the turquoise green sea. The islands of Palau are among the most beautiful diving areas in the world. The inhabitants of the island are now very important to their intact nature, nowhere in the region are there as many protected areas as here. As early as 2009, Palau declared its territorial waters to be the world’s first shark sanctuary. 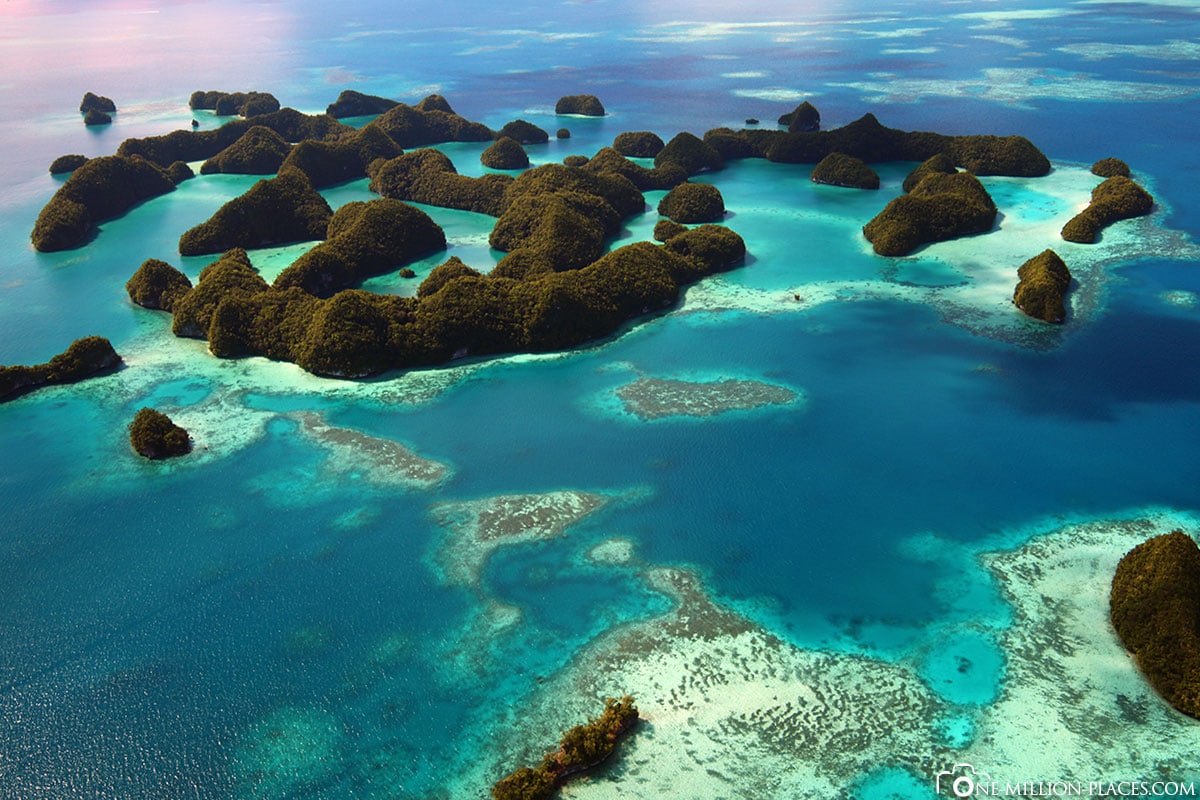 The Rock Islands in Palau

Transfer from the airport to Koror

The Roman Tmetuchl International Airport is located about 25 kilometers from the city of Koror. The airport is not really big and when we walked with our suitcases towards the exit, almost all the stalls (car rentals etc.) had actually closed. We were told that most of the time only 2-4 planes a day land or take off in Palau – mainly (for whatever reason) in the middle of the night. As a result, the airport may be extinct during the day.

Getting to the hotels from the airport to Koror is therefore not so easy. Unfortunately, there is no public transport and in the end only the following options:

HOTELTRANSFER – You can arrange a transfer from the hotel or the diving school. However, depending on the distance of the hotel, it usually costs around .15 to .20 per person per way.

TAXI – You can take a taxi. However, taxis in Palau are relatively rare and we can’t say whether there are any at the airport. When we arrived, we hadn’t seen any.

MIETAUTO – You rent a car. However, from our point of view, this does not really make sense, because otherwise you can not really do much by car on the small island. For a day or two, a car is ideal to explore the island on your own. Otherwise, however, it is not worth it.

We had arranged a transfer via our diving center Fish ‘n Fins and when we left the airport our driver Doug was already waiting for us. 20 minutes later we arrived at our Hotel Palau Royal Resort. After we moved into our room we fell into bed tired of death. The next morning at 8 o’clock we went on to the diving school of Fish ‘n Fins and our first dive in Palau. 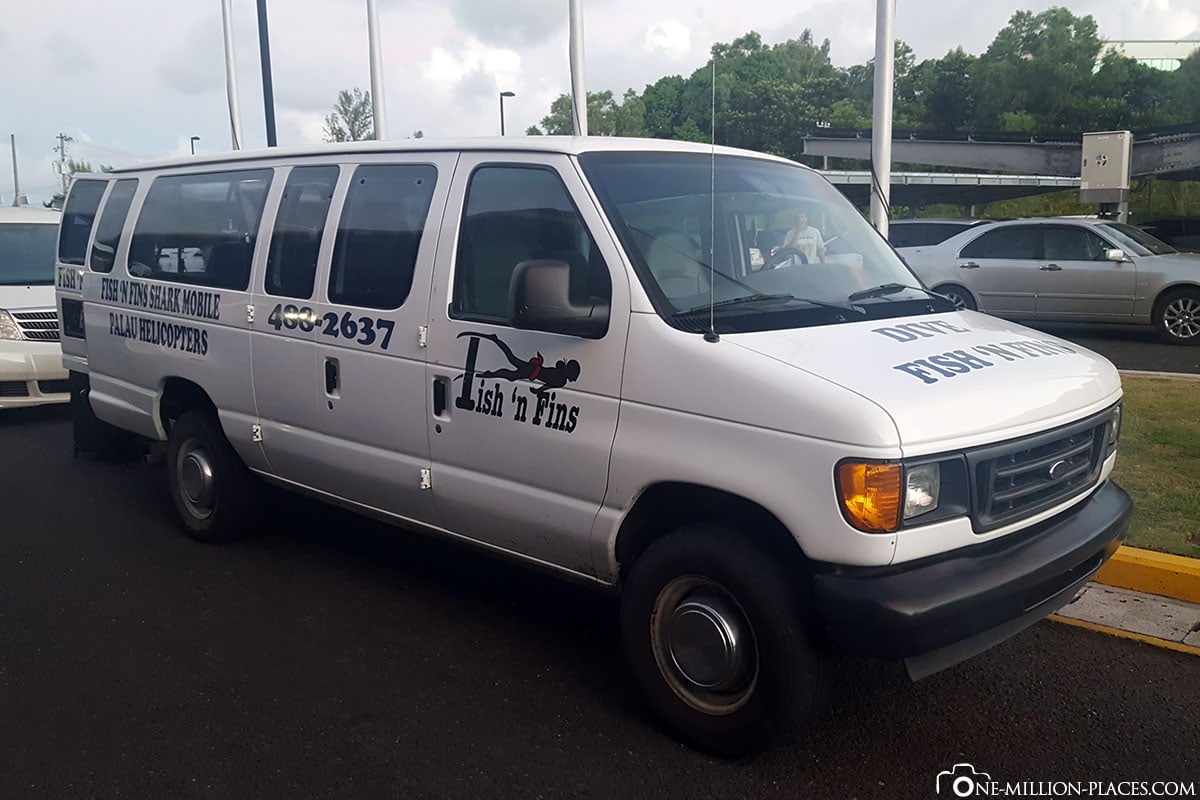 Already on the entry form, which you have to fill in for customs, it says that every tourist must pay an exit tax of 20 US dollars and a so-called “green fee” in cash on departure. When planning your trip in advance, we found a wide range of information on entry and exit fees (sometimes up to 250 US dollars). On the website of the Foreign Office, for example, it says that from 01.04.2017 you have to pay a fee of 100 US dollars. However, this was not the case with us. In fact, we had to pay “only” the green fee of 30 US dollars and the departure tax of 20 US dollars per person.