Today we had to get up very early, because we had booked an island tour on Oahu via Oahu Photography Tours, where the photography and the corresponding photo motifs should be in the foreground.

Around 5.45 am we were picked up by our guide in a van. There were four other people on board, so we were only six in total – such small groups are really great. This was also important to us when booking a tour. On the homepage of Oahu Photography Tours we had already read that a maximum of seven people are taken on the tour. Here are some facts about the tour “Circle Island Sunrise”:

When all the people were picked up and were in the car, the tour could start 🙂

The sunrise at Sandy Beach Park

Our first port of call today was Sandy Beach Park in the east of the island. Except for us there were only a few people on the way – but there were still some crazy people who had already bathed in the waves at 6.30 in the morning. After walking a few meters along the beach, we found a nice spot to unpack our cameras and marvel at the sunrise on the east coast of Oahu. The rocks on the beach, the big waves and the golden yellow, rising sun were a beautiful backdrop for fantastic exceptions. 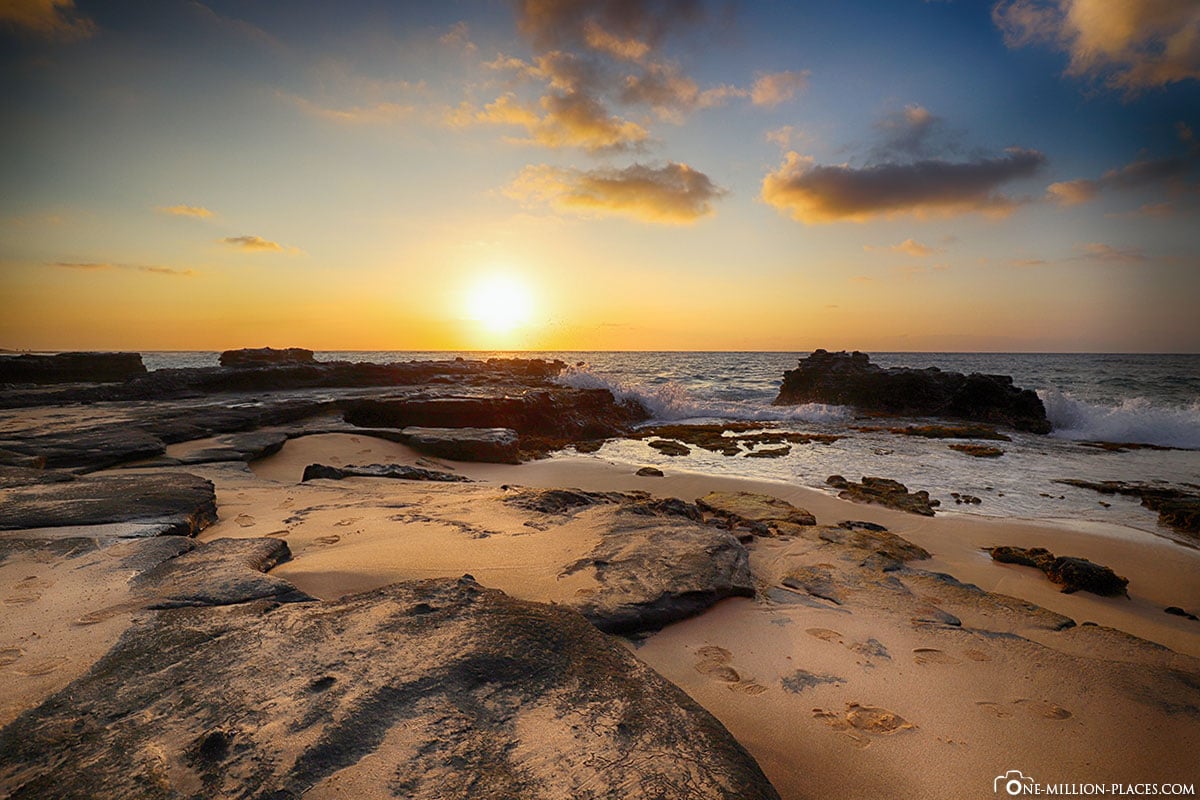 The Makapu’u Beach Lookoutis only about four kilometers from Sandy Beach Park. From up here you have a great view of the bay – overlooking “Rabbit Island” and another small offshore island. Both islands are a breeding area of different seabirds and may not be entered as a bird sanctuary. If you walk back a few meters from the Makapu’u Beach Lookout, you will come to the Makapu’u Point Lighthouse Trail, which leads you 1.5 miles to Makapu’u Lighthouse. Since we were travelling as a group and the hike was not on the agenda, we did not walk along the path. However, if you drive the main road northwards, you will also see the lighthouse in this way.

Afterwards we went on to Waimanalo Beach Park, which with 4.8 kilometers supposedly (we did not measure) 😉 is the longest uninterrupted white sandy beach in oahu. The beach is lined with Australian ironwood trees that create a beautiful photo motif. Waimanalo Beach Park, like almost every major beach park in Hawaii, has showers, toilets, a gazebo, picnic tables and a lifeguard tower. By the way, the beach is not completely unknown: Waimanalo Bay was the filming location for Magnum and two seasons of Baywatch Hawaii.

The mountain ranges of the Ko’olau Mountains

Next, our guide wanted to show us the mighty Ko’olau Mountains, so we drove to a residential area at the foot of the mountains. For 15 minutes we stopped here and took some photos. The wrinkled Ko’olau Mountains dominate the eastern half of Oahu and are one of the two great mountain ranges that make up the island (the other is the Waianae Mountains). The Ko’olau mountain range is almost 1,000 meters high and rises directly from sea level, which results in a beautiful mountain scenery. 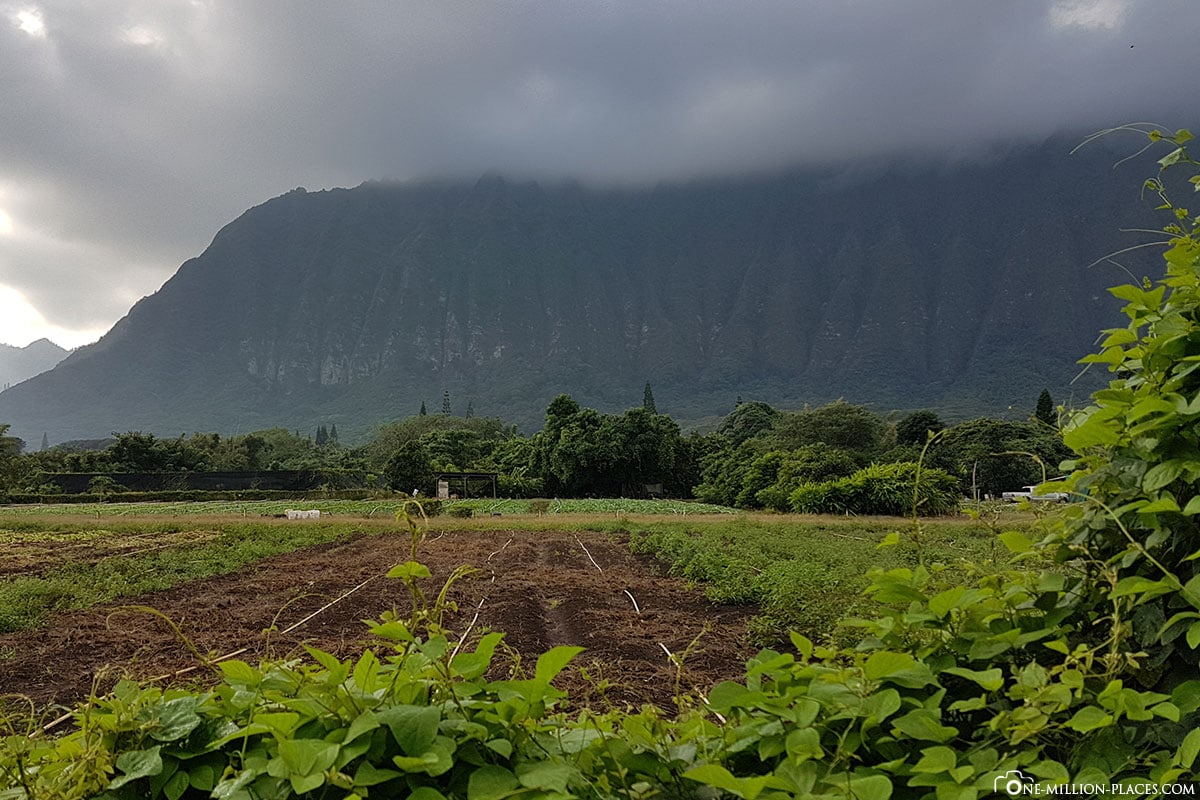 View of the Ko’olau Mountains

Breakfast at Kalapawai Market in Kailua

Breakfast time was so slow and most of our van needed coffee. So we made a half-hour stop at Kalapawai Market in Kailua. In the small shop, which is located a few meters from Kailua Beach Park, you can get fresh sandwiches, coffee, food and souvenirs. In Kailua, by the way, former US President and Hawaiian-born Barack Obama was mostly over the Christmas holidays. Here he had rented a large house directly on the beach, which has also become known in the media as the “Obama Winter White House”.

The Nu’uanu Pali Lookout was not part of our “Circle Island Sunrise” tour. But we visited the viewpoint on another day on our own, because we wanted to have a view of Kaneohe Bay from above. From Kailua you can reach the viewpoint in about 15 minutes. You pay a few US dollars for parking, but otherwise admission is free.

Byodo-In Temple in the Valley of the Temples

Our next destination was the Valley of the Temples, which is the final resting place for many of the deceased of Hawaii. On the green areas of the hilly landscape are the tombs, but also statues, crypts and mausoleums. The main attraction of the site is the Byodo-In-Temple, which we reached in the morning. The good thing was that all the big tourist buses weren’t here at the time, so we could see the area in peace. 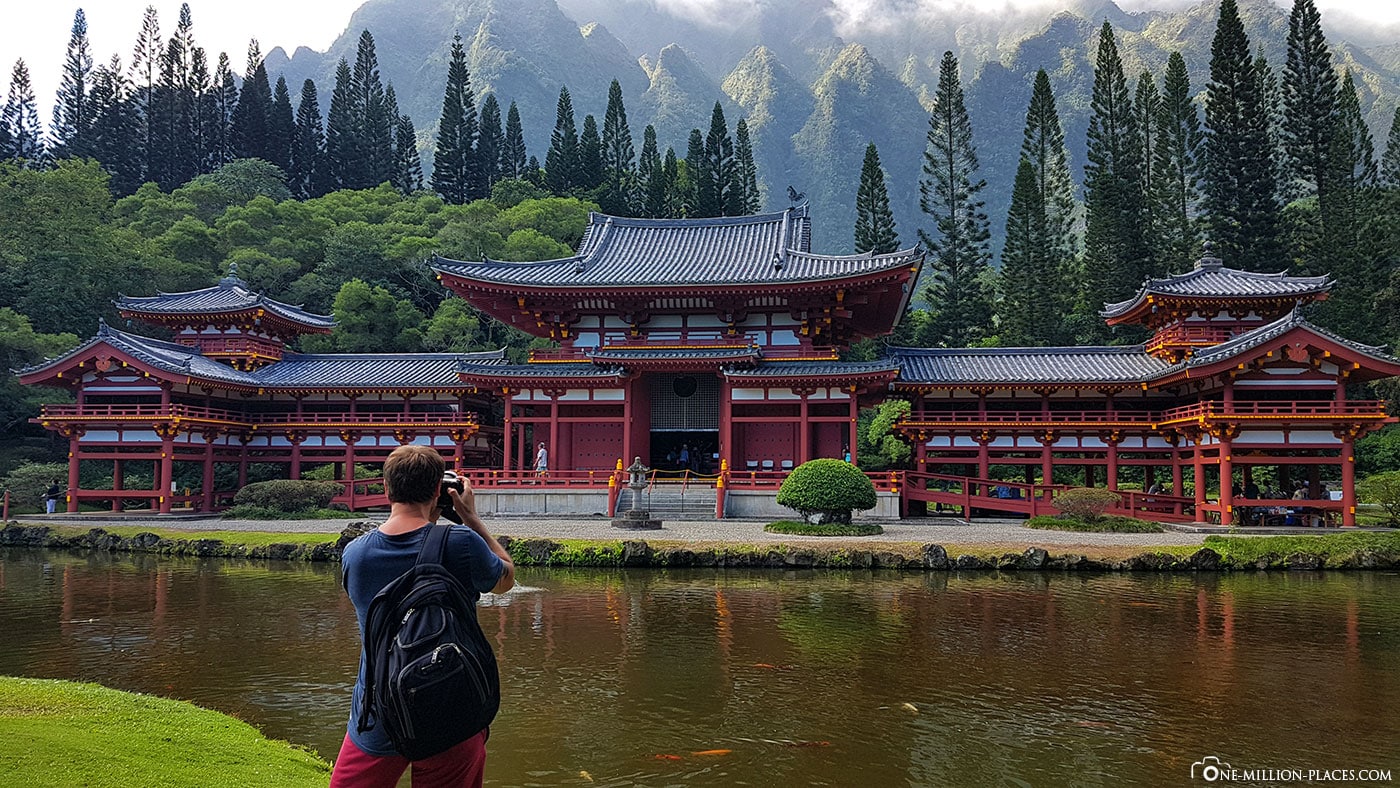 The Byodo-In temple with the great mountain scenery

When you come to the terrain, you are amazed at the madness. A red temple in front of the mighty walls of the Ko’olau Mountains. Above them, the clouds move along. The Byodo-In is a non-denominational temple in the Valley of the Temples. It is a replica of a 900-year-old Buddhist temple in Kyoto, Japan, and was inaugurated in 1968 to mark the 100th anniversary of the first Japanese immigrants to Hawaii. Inside the temple there is a 5.5 m high Buddha statue. On the temple grounds there is also a large pond with koi carp, a three-ton peace bell and a lush Japanese garden.

After we left the temple, we took another round through the grounds of the Valley of the Temples. At the top of the valley – Ocean View Terrace – you have fantastic views of the mountains and the ocean. Up here are the most expensive tombs – you actually pay for the view.

We continued along the coast towards the north to Kualoa Regional Park. From the park you have a beautiful view of the small island of Mokoli’i, which is also better known as “Chinaman’s Hat” due to its shape.

At the northernmost tip of Oahu we arrived after about 33 kilometers at Kawela Bay. Here we got fried bananas at a street market stall and walked to a large, about 150-year-old Banyan tree. The banyan tree is a fig that begins its life as an epiphyte, i.e. a plant that grows on another plant when its seed germinates in a gap of a host tree. The Banyan Trees emits air roots that develop over the years into a dense network. When the roots have reached the soil, the tree gets a growth boost, as the plant is no longer exclusively dependent on the host tree. Over time, the infested tree is finally crushed and dies.

The surfers in the Banzai Pipeline on the North Shore

Another ten minutes later we made a stop at Ehukai Beach Park, famous for the Banzai Pipeline, the surfer hotspot on the North Shore. In the winter months, the waves can reach heights of more than six meters. No wonder people from all over the world come here – whether professional surfers, photographers or just spectators. Here we just sat down in the sand for a few minutes and watched the surfers fight with the waves and conquer them. Already very impressive.

The small surfer town of Haleiwa

Haleiwa is a small, cozy surfing town and is considered the social and artistic center of the North Shore. The character of the old plantation town can be found in many buildings. The town invites you to linger and makes it a popular destination for tourists. Especially in the Haleiwa Town Center, where we also had a little break, there was a lot going on and people shopped, ate or relaxed here.

Our last stop on the Circle Island Sunrise Tour was supposed to be the Green World Coffee Farm. Somehow the stop seems to have slipped off the agenda or our guide just didn’t think about it. Too bad actually.

Around 4.30 p.m. we were back at the hotel and strolled a bit through Waikiki. This was another great day with many new impressions 🙂 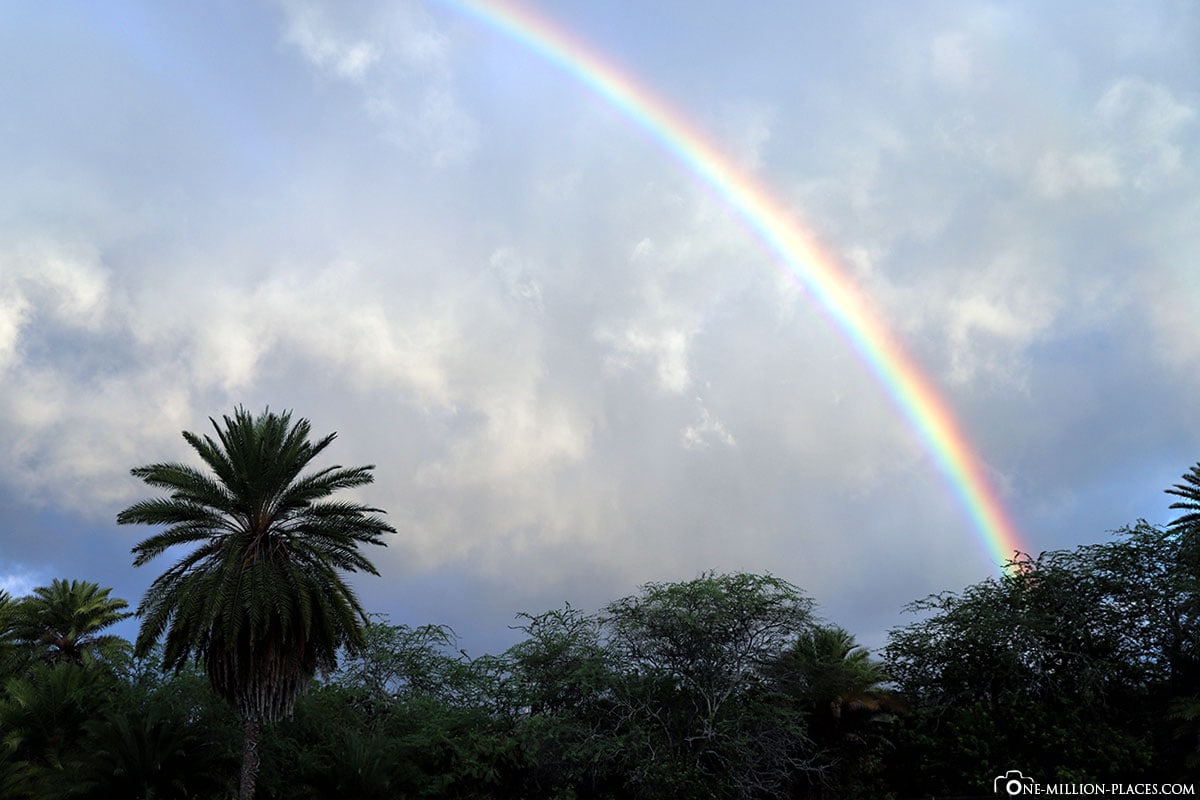 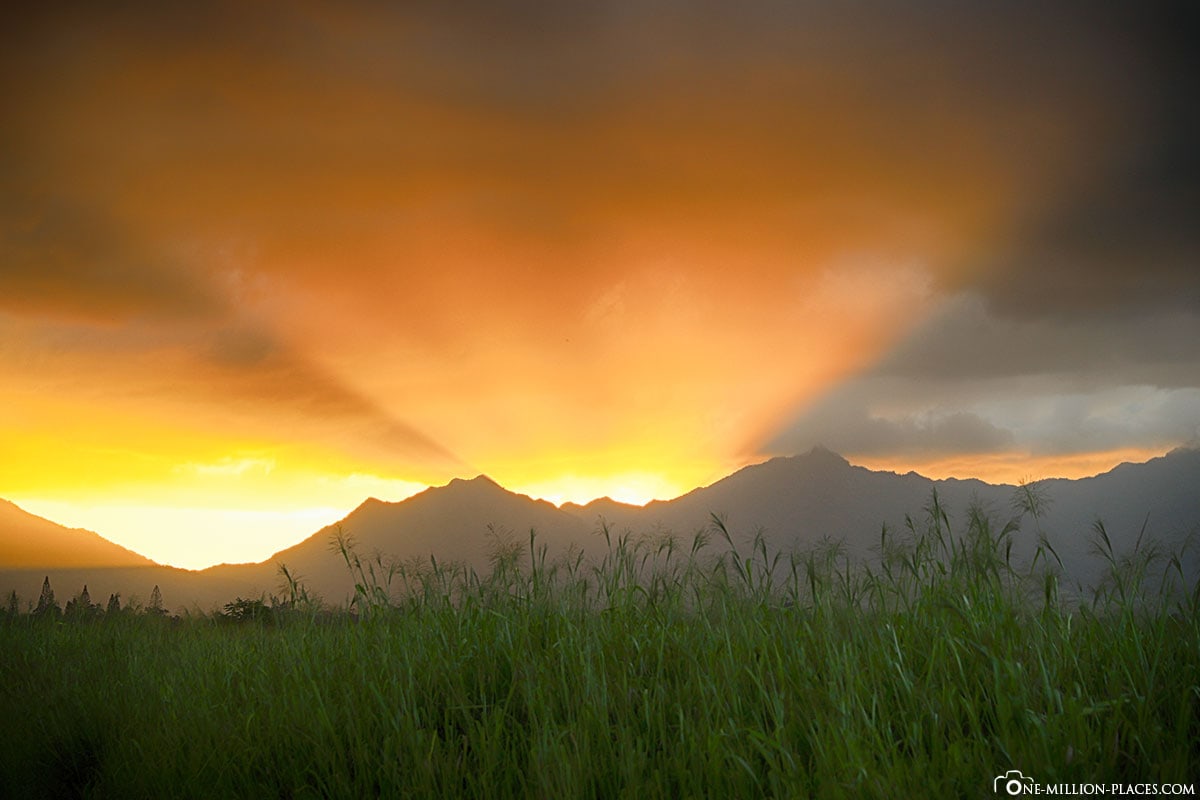