During our tour through the southern Harz we were able to discover some beautiful sights: one of the most beautiful villages in Germany, an impressive stave church, old mining tunnels, historic half-timbered towns, the largest double cross in the world and a medieval monastery.

The town of Stolberg (Harz) is surrounded by 7,000 hectares of forest and impresses with its many half-timbered houses in Renaissance style, which date back to the 15th to 18th centuries. As a result, the village was designated a “state-recognized health resort” and is nicknamed the “Pearl of the South Harz”. Stolberg (Harz) is also located on the Deutsche Fachwerkstraße and is the first historical European city in Germany. 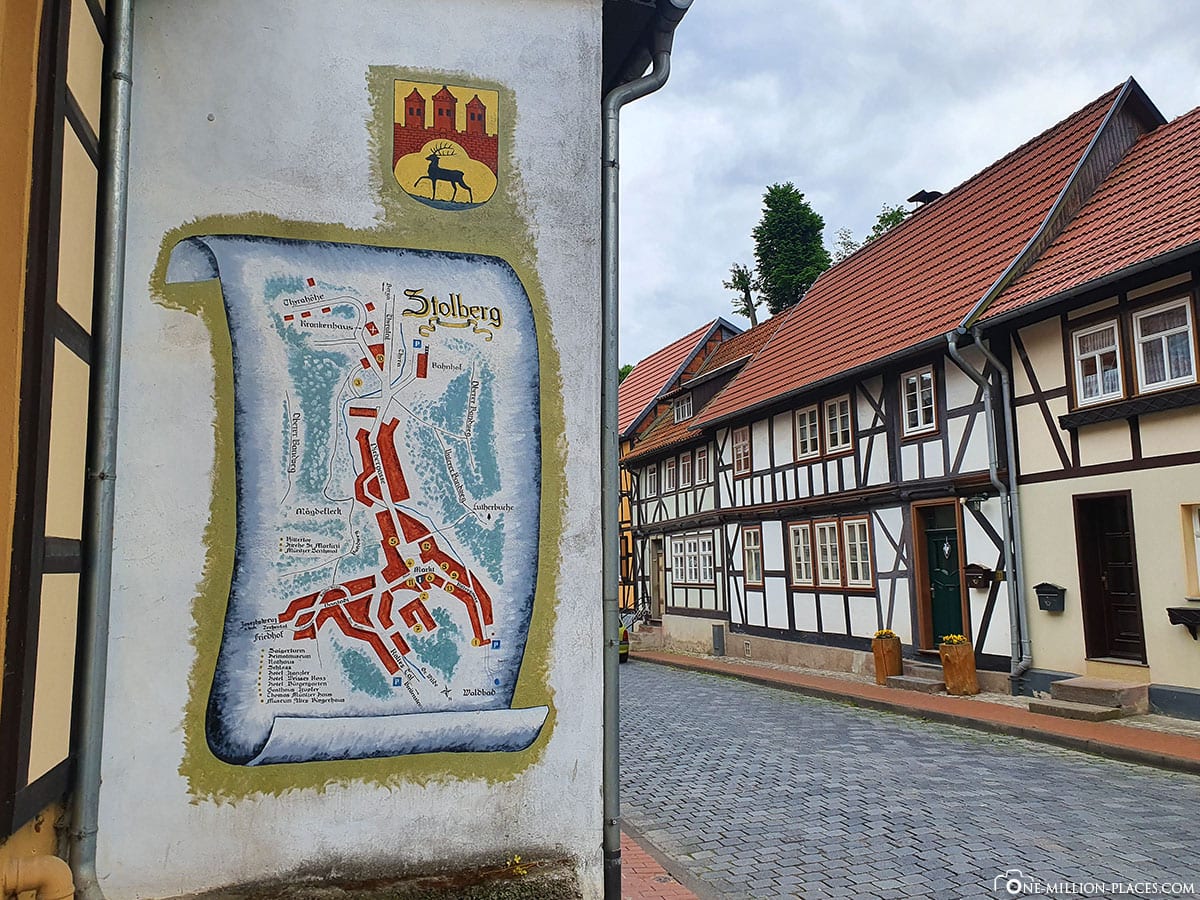 Stolberg in the Harz

In 2019, Stolberg (Harz) was named Germany’s most beautiful village by the online travel magazine Travelbook. The only criterion for the nomination was that the population is less than 2,500. Stolberg (Harz) with its almost 1,100 inhabitants has easily achieved the criterion. About 320,000 tourists visit the city every year.

The central point in the city is the market square, where the town hall, the former post office (which today only resembles a conspicuously blue letterbox) and the Seigerturm next to a whole series of pretty half-timbered houses as well as cafés/restaurants. The present Stolberg town hall dates back to 1454 and was expanded or rebuilt again and again in the centuries thereafter – but without significantly changing the external appearance. The architecture of the building is interesting and equally curious: the upper floors of the town hall can only be reached from the outside via a staircase that leads to the church of St. Martini on the right. Another special feature is the adaptation of the building architecture to the calendar: the town hall is to have 12 doors, 52 windows and 365 window panes – based on the months, weeks and days of the year. Opposite the town hall is the medieval Seigerturm, which was built before 1282 as part of an inner city gate.

A few meters on foot from the market square, the Niedergasse leads, past the Seigerturm in the direction of the southern exit of the village. The street itself is worth a walk because of the many pretty half-timbered houses. The Museum Alte Münze, which is housed in a listed half-timbered house from 1535, is worth mentioning here.

The Stolberg Castle dates back to the 13th century and is perched on a three-sided mountain spur high above the city. Since its construction until 1945, the castle has been used as the seat of the Counts of Stolberg and the Princes of Stolberg-Stolberg. From 1948, the castle was converted into a recreation home teachers’ union of the former GDR; for this purpose, some outbuildings were demolished. After years of vacancy and various takeovers, the German Foundation for the Protection of Monuments has been the owner of the castle since 2002 and supports extensive repair measures. After almost 20 years, the castle was reopened to visitors in March 2008.

About 10 minutes drive from Stolberg, on the Großer Auerberg is the Josephskreuzbuilt in 1896. With its 38 m height and its 125 tons weight, it is the largest iron double cross in the world. 200 steps lead to an observation deck, from which you have a fantastic view of the surroundings.

The Stave Church Stiege can be reached from Stolberg (Harz) within 15 minutes and is located in the Selke valley between Stiege, Breitenstein and Güntersberge. In the middle of this forest, the Lung Heilstätte Albrechtshaus was opened in 1897. In addition to the building, a few years later, in 1905, a wooden church in horizontal block construction was built, which was to serve as a chapel of the pulmonary hospital.

Due to vandalism, the church was sealed in 2011 and has not been accessible since (except for a few exceptional days). Today the church is still in its original state; only the wooden shingles were replaced by bricks. In 2014, an association was founded with the aim of moving the church into the village of Stiege so that it would no longer fall into a Lost Place. At the new location, the church will be completely restored and reopened to the public as a sight. In June 2020, corresponding federal funding was pledged, so that the implementation of the church is now in the starting blocks.

The Rabensteiner Stollen in the Harz

On our journey through the southern Harz we passed the Rabensteiner Stollen relatively spontaneously. The Stollen is a former mine in the north of Thuringia, where coal was mined from 1737 to 1949. Since 1981 it has been used as a visitor mine, which we would have liked to have looked at as part of a guided tour. The beauty of this mine is that the entrance to the tunnels is done by means of a mine railway. Underground, you will walk about 600 metres through the mine, where you will get an insight into the mining activities of the 18th to 20th centuries. But since we were there spontaneously and unfortunately there are only a limited number of guided tours with a limited number of participants per day, we unfortunately had no chance to get tickets.

The town of Harzgerode in the district of Harz has about 8,000 inhabitants and has been a state-recognized resort since 1998.

Particularly worth seeing is the market square with the listed half-timbered town hall and the market fountain. The town hall was built in 1900 and 1901 on the old foundations of a previous building built in 1639. The market fountain in front of it is intended to recall the mining origins of the city; The three figures Bergmann, Frosch and Silberich were installed for this purpose in 2013. On the northwestern edge of the old town is the Castle Harzgerode, which was first mentioned in 1384 and was extended in the 16th century. The main building – a three-storey Renaissance building – a covered defensive passage way and the round tower have been preserved to this day. In the Castle Museum, an exhibition uses many original pieces, exhibits and sculptures to inform about the city’s history, mining and art casting.

Walkenried Abbey is a former Cistercian abbey and is idyllically situated on the southern edge of the Harz Mountains. Donated in 1127, the monastery experienced 12. and 13th century its heyday and already in the middle of the 14th century its beginning decline. The building complex on display today includes the ruins of the monastery church, which can be visited free of charge on the outdoor area, as well as the largely preserved Gothic cloistered building, which was converted into a museum in 2006. We particularly liked the Gothic cloister with the double-nave cloister wing, which is one of the most beautiful in northern Germany.

Since 2010, the monastery has been part of the UNESCO World Heritage Site “
Rammelsberg Mine, Old Town of Goslar and Upper Harz Water Management
“. There is a reason why the monastery of Walkenried is a part of it: In the early 13th century, the monks of the monastery developed the first systems for the water supply of their coal and pond management. The monastery functioned as the economic headquarters of a developing industrial area and the Rammelsberg mining industry. At Rammelsberg, the monks supported the realization of modern water management systems and were the most important mountain lords there for almost three centuries with the mining town of Goslar.