At the end of our short holiday in the Harz, we made a detour to the nearby district town of Goslar, which lies on the northwestern foothills of the Harz in the state of Lower Saxony.

Things to know about Goslar

Goslar was first mentioned as a mining town in 979 and now has about 50,000 inhabitants. The 1000-year history of the city meets you on a stroll through the city, because tradition, history and modernity meet here: you will find historic buildings, imposing half-timbered houses and the unique Imperial Palatinate up to squares and shops that invite you to linger, relax and shop.

What to see in Goslar

We parked our car in a car park right in downtown Goslar and were able to explore the city on foot on foot.

The historic old town of Goslar is very well preserved and includes over 1,500 half-timbered houses from different eras. The central point of contact is the market square with its town hall from the 15th century. In the centuries after that it was repeatedly enlarged by new additions. Since 2011, extensive repairs have been carried out at the town hall, which will probably not be completed until 2021. In the immediate vicinity of the town hall is the historic Gildehaus Kaiserworth, built in 1484, with its distinctive red facade, which now houses a hotel. The market fountain stands in the middle of the market square and is crowned by a golden eagle, the landmark of Goslar. On the east side of the market square there is a bell and figure play in the gable of the combing building, which resounds four times a day and shows the history of the Rammelsberg mining industry.

Behind the market square you reach the market church of St. Cosmas and Damian with their two different towers. The 66-metre-high north tower is accessible via the “Sky Ladder” and offers a beautiful view over the city from above. It is worth a walk around the market square through the cobbled streets, because here are some beautiful old guild and townhouses, such as the Baker’s Guild House and the Chest Cloth – one of Goslar’s most beautiful patrician houses. Goslar’s oldest square, the Schuhhof, is also located directly on the market square.

A detour to the breeding, a stream flowing through Goslar, should not be missed, because especially on the shore there are also some very nice half-timbered houses, which give an idyllic photo motif (e.g. in the abated road). Other sights include the kennel, a battery tower and former part of the fortifications, the Breite Tor, a former city gate as well as Peterstraße and Glockengießerstraße, where beautiful half-timbered houses are located.

Built between 1040 and 1050 under Henry III, the Kaiserpfalz is considered the largest professed building of its time and is a unique monument to secular architecture. For more than 200 years, German and European history was written here on numerous imperial and court days. The Kaiserpfalz covers an area of about 340 x 180 meters and is located at the foot of the Rammelsberg in the south of Goslar. On the site are the Imperial House, the former collegiate monastery “St. Simon and Judas”, the Palatinate Chapel of St. Ulrich and the Church of Our Lady.

The Rammelsberg Visitor Mine

South of goslar city centre is the former ore mine and today’s visitor mine Rammelsberg, which has been the only mine in the world to have been continuously in operation for over 1,000 years.

The mine has supplied almost 30 million tonnes of ore in its history and was shut down in June 1988 by the last owner, Preussag AG Metall, as the deposit was largely depleted. A citizens’ initiative prevented the demolition of the mine and made it possible to reopen as a visitor mine. A few years later, in 1992, the ore mine became the first industrial plant in Germany to be designated a World Heritage Site by UNESCO together with the old town of Goslar.

We bought a day ticket for the museum for 9 EUR per person in order to get a better insight into the former working and everyday life of the miners. We would also have liked to have taken part in one of the many guided tours, during which you can sometimes dive underground, but unfortunately all were already fully booked. On the grounds of the museum there are various exhibitions , some in the middle of the original processing machines.

In the Goslar district of Hahnenklee-Bockswiese there is a beautiful stave church, which was modelled on the Norwegian stave church Borgund and was consecrated after a one-year construction period in June 1908. The church was built by Prof. Karl Mohrmann, master builder of the Hanoverian State Church. During the construction, he orientated himself to the Nordic wooden churches, but adapted the Hahnenkle era church in size and design to the needs of the congregation. With 240 seats, for example, it offers considerably more space than its models with approx. 50 seats and allows a lot of light into the interior through the relatively large windows. 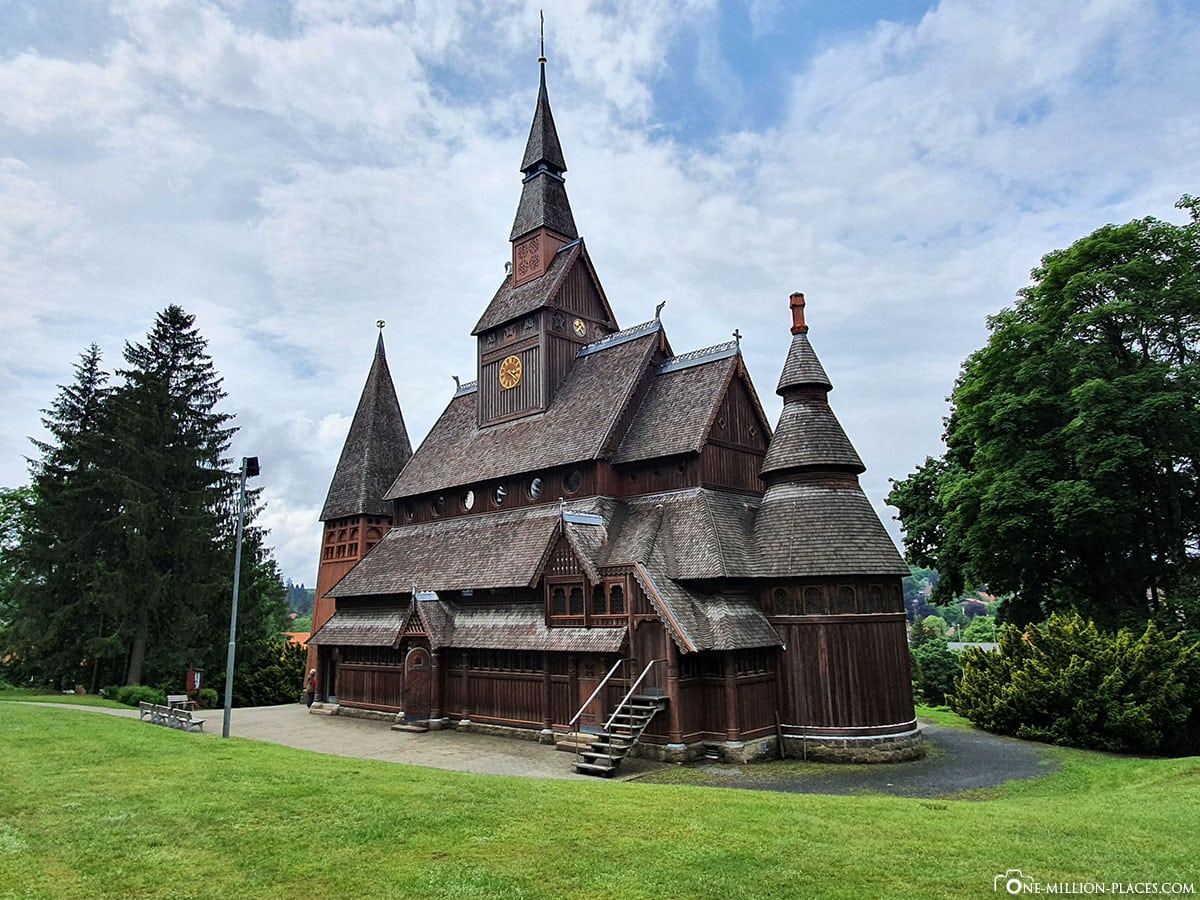